It’s no secret that I don’t mind trying new airlines, despite the fact that LATAM’s A350 seats are far inferior to Qatar Airways’ A350 seats. So, how was my flight in Qatar Airways’ leased A350 business class product?

Qatar Airways’ leased A350 business class cabin features 30 seats spread across five rows in a 2-2-2 configuration. For a forward facing business class seat, I actually thought that the seats were gorgeous. They were wide, well padded, and I loved the colours, though at the same time there’s something to be said when LATAM is one of the few airlines that feature an A350 business class product without direct aisle access (the other such airlines being Ethiopian, Lufthansa and Air Caraibes, out of 12 airlines that operate the A350). 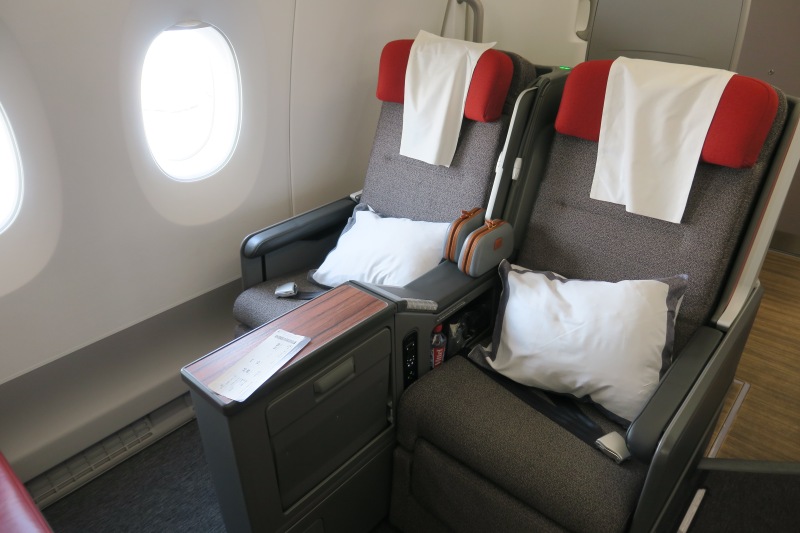 I appreciated that storage space was maximised, as it’s otherwise limited in this configuration of forward facing fully flat seats. While there were nooks around the seat, the main storage compartment was under the ottoman, which fit my camera bag.

The seat also worked well as a bed – I had no problems with sleeping in the seat, and being in a window seat, I found it nice and private (I probably wouldn’t have said the same were I in an aisle seat, however). I had to clamber over my dad whenever accessing the aisle, though my dad never reclined his seat fully, so I had no issues with that either.

The seat also featured two USB power ports – one near the seat, and one on the other side should you want to place your phone in one of the nooks provided on the seatback in front. There was also an 110V power plug, so I had no problems with power on the flight.

Despite being a leased aircraft, Qatar Airways still offers their own crew and service on the flight, down to their amenities. Qatar Airways doesn’t feature pajamas on regional flights anymore (as far as I know, they don’t feature mattress pads on any flights anymore), though they do feature blankets on request. They’re the same blankets that I experienced on my flight from Hong Kong to Doha, so I have no complaints there. The same pillow was provided, as was the same Brig’s amenity kit.

The headphones were marginally different, in that they had an actual noise cancellation switch. My best guess is that they were Phitek headphones – while they didn’t beat my Bose QC35 headphones, which I ended up using throughout the flight, they were probably the best airline headphones I’ve had thus far. 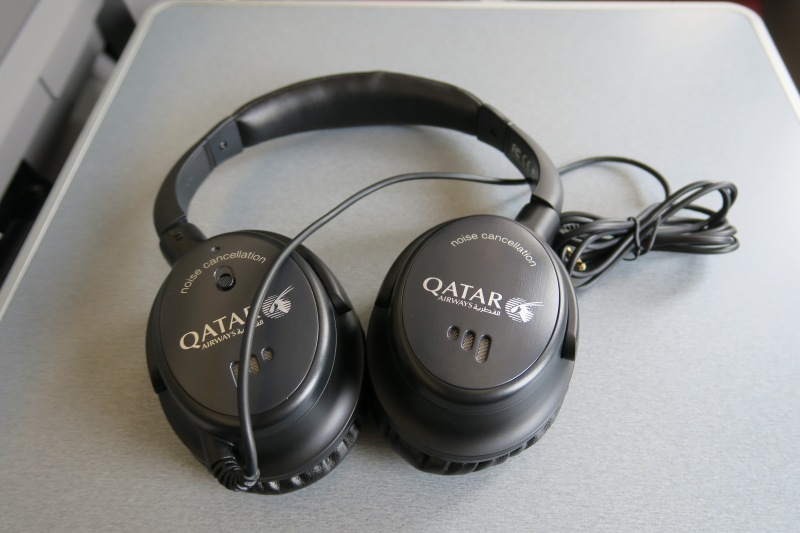 Qatar Airways offered a breakfast service off an a-la-carte menu on this morning flight, which is usually my least favourite airline meal of the day. I ordered the Arabic breakfast, which I know that some of my friends have appreciated on Qatar Airways. While it wasn’t my cup of tea (the bowl of foul medames and the amount of feta cheese was too much for me to handle, as someone who had the flu and was having his third breakfast of the day), it was leagues ahead of breakfast I’d had on any other airline in business class.

As a whole the meals weren’t as exciting as the a-la-carte options were on the longhaul segment prior, though I respect that, as the flight was shorter, a breakfast-catered flight, and was also operated on a leased aircraft.

I’m happy to say that the crew seemed to really enjoy their jobs. I was taking a picture of the economy cabin when I first entered the plane, and the flight attendants said that the photo would be better with crew in them, and posed for a photo, which I really appreciated. Unfortunately I can’t include it here, as I forgot to ask for permission to post the photo onto the blog.

The business class staff were incredibly proactive and kept asking us if we wanted to be woken up earlier in case we wanted anything, and when I was up after a two-hour nap I was offered something to eat, something to drink, etc.. The level of attentiveness was impressive, and the crew seemed incredibly comfortable with their job as well. Qatar Airways definitely has the best service procedure of any airline I’ve flown in business class, and I know that Akbar Al Baker boasts about that often – I hate to admit it, but he’s right.

To have an equipment swap from Qatar Airways’ reverse herringbone seat to their leased LATAM product was pretty disappointing. That said, for a forward facing business class seat, I think that LATAM’s seat is one of the better designed out there (that said, it still lags behind the competition in terms of A350 business class seats).

However, I found the soft product to be exceptional across the board. I can’t say that I was as impressed with the food as I was with the first segment, though I walked in with incredibly high expectations, and Qatar Airways served me two of the best airline breakfasts I’ve ever had. Service was also friendly and proactive, and didn’t seem forced for the most part, which I appreciate – I hope that this actually reflects a level of improvement in how Qatar Airways cabin crew are treated, and the crew aren’t just very good actors.