Hello from London! I had the chance to fly Virgin Atlantic in premium economy again for the first time since last July. I remember leaving the flight feeling pleasantly surprised, and found the soft product amongst one of the better premium economy products I’ve flown (the hard product was decent). Well, I’m happy I got to try the product again, as the flight itself was great. 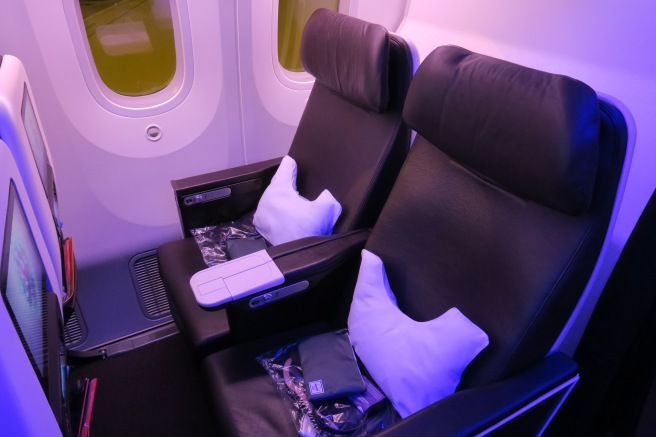 I’ve only flown two other premium economy products in the last few years (which is why I wanted to try something different, though Cathay Pacific and British Airways both had prices over the roof), and based on the two flights that I’ve taken on Virgin Atlantic, I think it’s safe to say that they are in the same league as Cathay Pacific and Singapore Airlines’ respective products. I’ll share a few overall thoughts that I have on Virgin Atlantic premium economy after this flight, though expect a full review to come soon.

I believe that an airline brand needs a clear focus, and I think it’s safe to say that Virgin Atlantic isn’t aiming for the world’s most luxurious product in all classes. They just want to be incredibly vibrant, quirky and fun. And they certainly succeed.

Their mood lighting is great. I can’t name another airline that uses mood lighting to the same extent as Virgin Atlantic, but it manages to not be obtrusive.

Their safety video is one of my favourites, as it isn’t boring, and it’s almost overly dramatic – everyone in the cabin actually looked around for the emergency exits when the safety video whispered “watch out for your nearest exit…it may be behind you”.

I also love their Wonder Wall concept, as I can get drinks or snacks anytime. Their snacks are great, and while their drinks are limited to ginger ale, tonic water and a few varieties of fruit juice, my mixing skills gave me quite a few beverages to enjoy throughout the flight (cranberry ginger ale, anyone?). 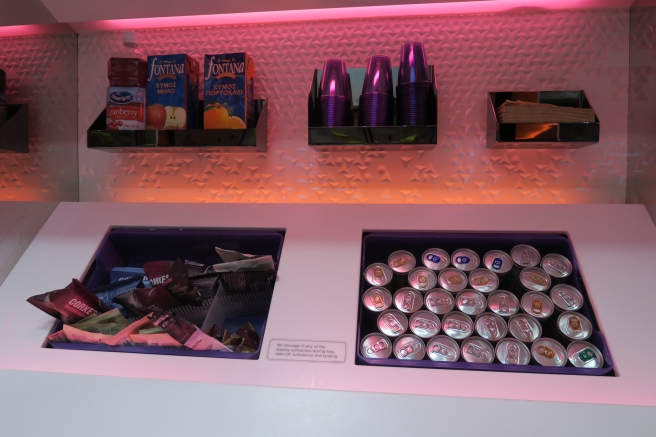 Virgin Atlantic’s seat doesn’t sound impressive on the surface, with 38″ pitch on a 787 in a standard 2-3-2 configuration. That doesn’t sound very spacious compared to the 40″-42″ that we see from a few other airlines. However, Virgin Atlantic’s seat is definitely carefully designed – they’re made of leather, yet they’re quite well padded. They feature two audio ports (one with a single hole for those bringing their own headphones, and one with two holes for those using Virgin Atlantic’s), a USB port as well as an 110V power port, so the seat is fully wired (in theory – stay tuned).

The seats also go pretty far back, but the seatpan goes forward at the same time, so you’re not going too far into the space of the person behind you. In my case that was a moot point, since I managed to snag my preferred seat at the back of the cabin (though I can’t say that climbing over my seatmate was effortless). While the seat doesn’t feature a legrest, I didn’t feel a need for one, as the footrest was supportive and had rather extensive positions. The first row doesn’t have footrests, but they’re provided with a separate foot cushion, which looked comfortable. 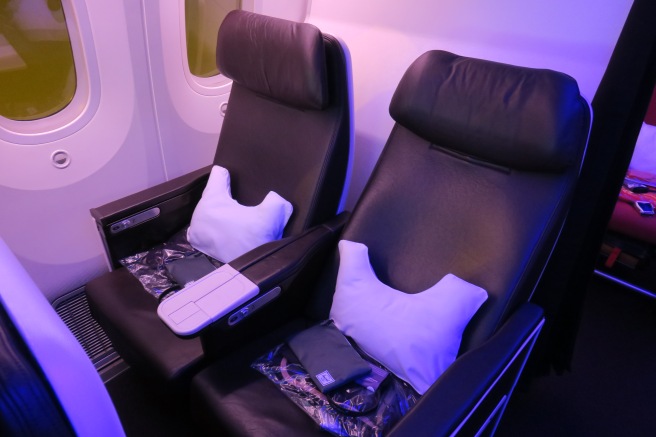 I slept a solid seven hours – while it wasn’t great sleep (as I had the last time I sat in these seats), I’m still feeling rather energised and ready to tackle the day here in London.

I had flown the exact same plane on the exact same route exactly a year prior, and at the time this 787 was the newest that Virgin Atlantic had in the fleet. It was delivered in May 2016, which means that the plane is a touch over a year old. 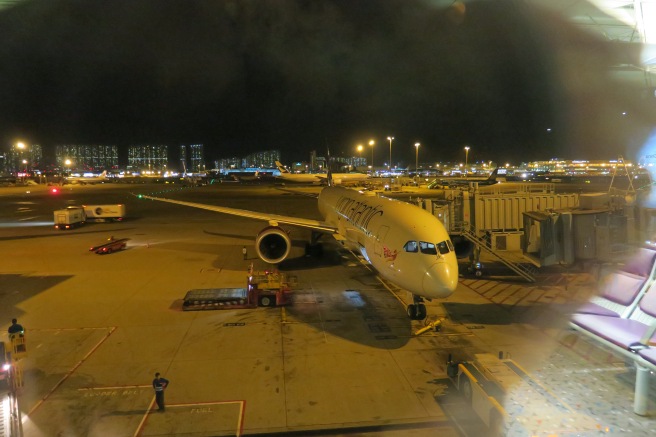 Unfortunately, it certainly didn’t feel like it. Both my power port and my seatmate’s were broken, and while I was fine with it as it was a nighttime flight and I’d get myself an hour or two at Heathrow anyway, I can’t imagine I’d be as happy if I were a business traveler on a daytime flight trying to catch up on work. It didn’t help that the floor was incredibly filthy, either. Oh, and did I mention that one of the two of my seatmate’s audio ports were broken, too?

The crew was amazing about handling it, so I’m not going to ask for compensation on a nighttime flight where I wouldn’t otherwise have found much use of a power port – though, in retrospect, I probably should have been offered compensation of some sort.

Virgin Atlantic Is Consistently Great With Premium Economy Onboard Service

While service on my economy flight back last July was subpar, I had a good experience with service in premium economy on the way back. Fortunately, service on this flight was great for the most part, and everyone that I met onboard was incredibly courteous and willing to help.

For example, I wanted to take a picture of the Wonder Wall before departure, so I asked one of the flight attendants if I can do so. She said “it looks very messy…let me clean it up a bit for you first”. She frantically moved around the newspapers on display for a while, and said “I guess it still looks messy, but go ahead”. I really appreciated that. 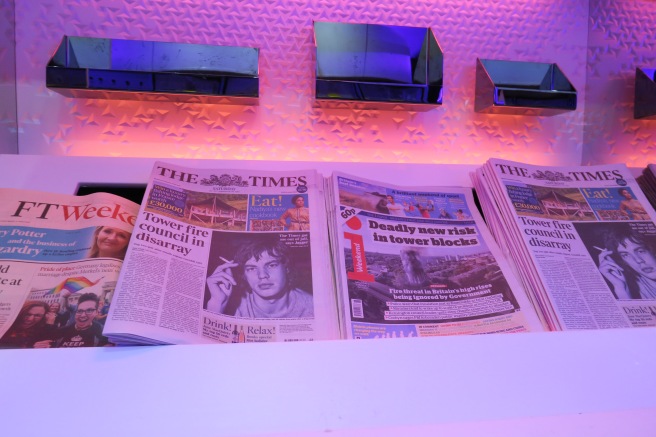 Similarly, when I went back after the snacks and drinks were displayed, the male flight attendant manning the wall at the time cleaned it up for me so I could get a better picture. The same flight attendant let me take a picture of the Upper Class bar when it was empty, which was very much appreciated. 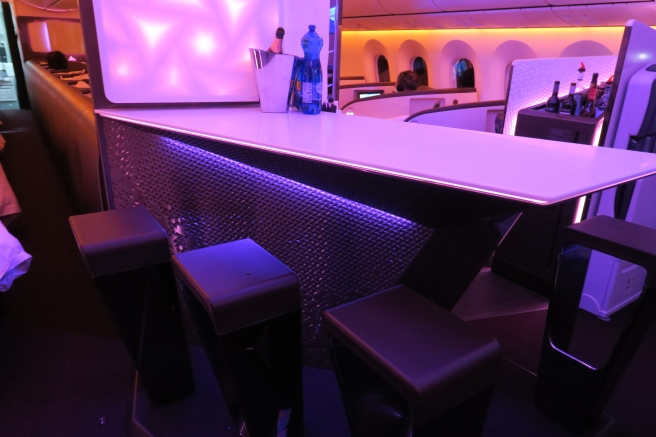 Shortly before landing I asked if I could photograph the Upper Class cabin after landing, and I was told yes. I asked permission again right as I passed by before leaving the aircraft, and was once again given a yes, so I managed a few cabin pictures before an Upper Class staff member approached me and asked, in a rather rude tone, what I was doing. I said I was taking a few pictures, and I’m not sure if she was giggling, laughing, or just clearing her throat in confusion, but nevertheless I was on my way quickly. 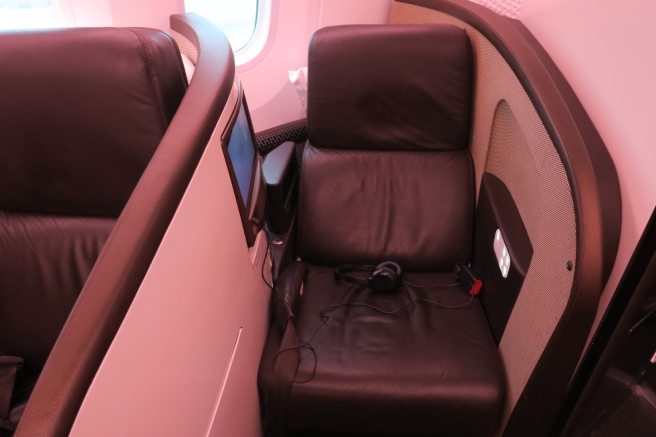 I know that Virgin Atlantic is trying to be modern, but dicing up chicken into really small pieces is going a little bit too far, in my opinion. While the sauce was good, the mashed potatoes were great and the beans on the side were fine as well, I couldn’t help but think that it was a shame that the chicken was diced up so thinly, as it became heavily overcooked. 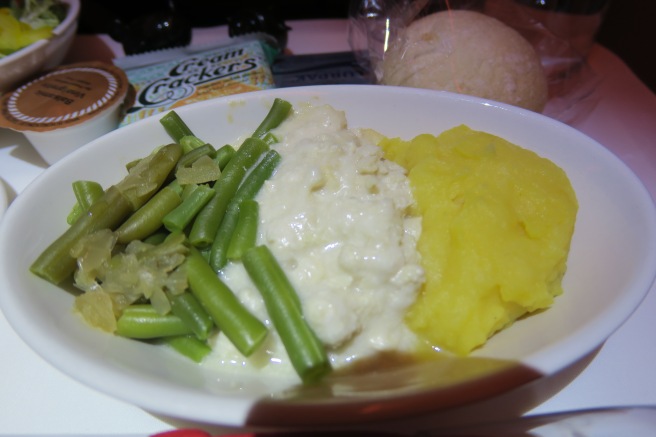 Landing At London Heathrow In The Morning…

I know this isn’t specifically related to Virgin Atlantic, but this morning’s sunrise was probably the best sunrise I’ve seen from anywhere in the world. 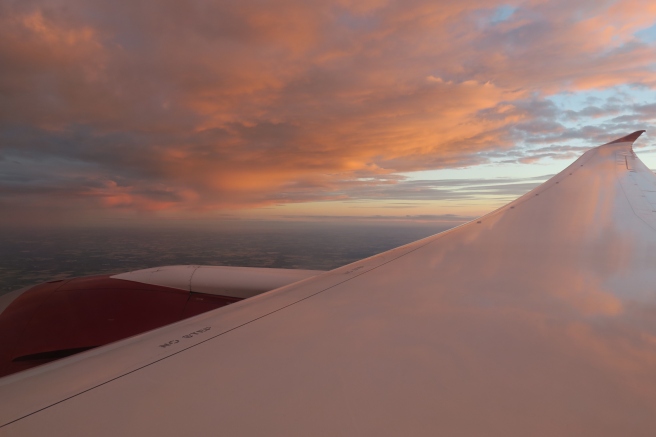 I’m happy that I get to fly Virgin Atlantic again on my way home, and definitely will try to access the Virgin Atlantic lounge for £60, so I can review it, now that I’m 16 and have a cash card on me.