EVA Air has long been quite a leader in their business class product. While the same can’t be said in their mediocre premium economy product and their latest 3-4-3 economy configuration, their longhaul fleet has reverse herringbone seats, and their soft product is also known to be outstanding, with generous amenities, good bedding, great food, and pajamas.

Well, EVA ordered a bunch of new 787-9s which have just arrived, and they seem to be changing their business class seats up on those aircraft. Here’s a quick walkthrough through the business class cabin on this aircraft (I really like this video):

I haven’t flown the Vantage XL seat, but here’s a review of a similar configuration on Swiss (there are differences, though you’ll get a general “feel” of the cabin structure with the linked trip report here). 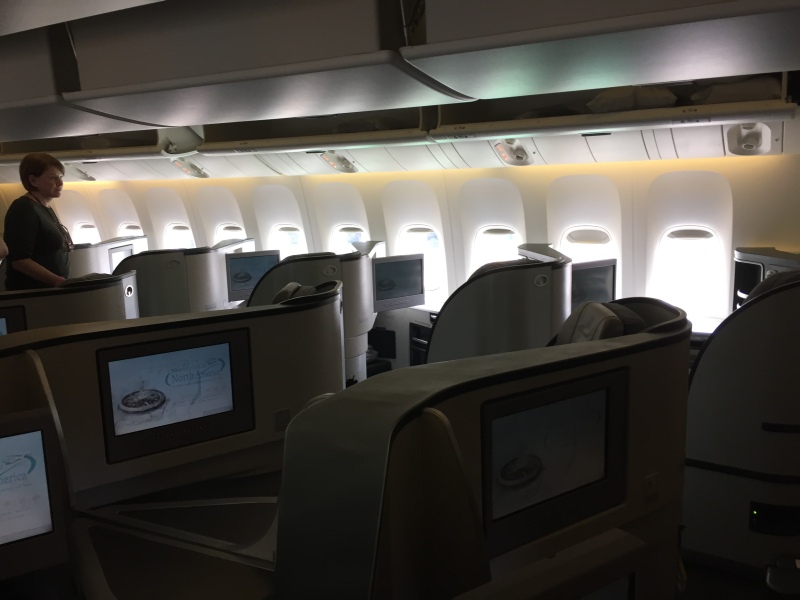 However, I do see why EVA Air went for this configuration, and quite like it, since it maximises storage. I also like how sleek and sexy the cabin looks – something that couldn’t be said about their aging-looking 777s.

One thing I see as a downgrade with these new seats would be that some seats are significantly more private than others – half of the seats here are closer to the aisle, which makes for less privacy, especially in bed mode. However, overall I’d say I’d be really happy to fly in this seat configuration.

Meanwhile in economy, EVA Air went for some sort of a “jungle theme” outfit, which I like – it’s quirky. The seats themselves are Recaro CL3710 economy class seats, similar to what I saw on Hong Kong Airlines a couple weeks back.

The first 787 will be limited to flying between Taipei and Hong Kong after it arrives on October 2, whereas the second 787 will spread to some destinations in North Asia, for crew familiarisation. After that, the 787 will begin to fly longhaul.

Anyone like the look of these new seats on EVA Air’s 787?