Hello from Seoul! Today I flew Korean Air’s 747-8 from Hong Kong to Seoul Incheon. I can’t even begin to say how much we lucked out on this flight, and how it’s hands down the best flight I’ve ever had in my life. However, first of all I need to objectively review Korean Air’s business class product. As usual, you can expect a full review of Korean Air’s business class (or at least what I flew), but here’s my first impressions of the product. Additionally, Korean Air has five and a half rows of business class on the upper deck, which is where I initially selected my seat. The advantage of the upper deck, apart from being quieter, is that there are storage compartments by the side of every seat. After sitting in an Apex Suite for a bit too long (since I was filming the seat and vlogging on the flight), I can say that it’s better than a reverse herringbone seat if you’re seated in a window seat. I know that’s what everyone says, and I have no choice but to agree. The reason is because it’s more private, and because you can have a conversation face to face with someone you’re traveling with due to how the ottoman is situated. 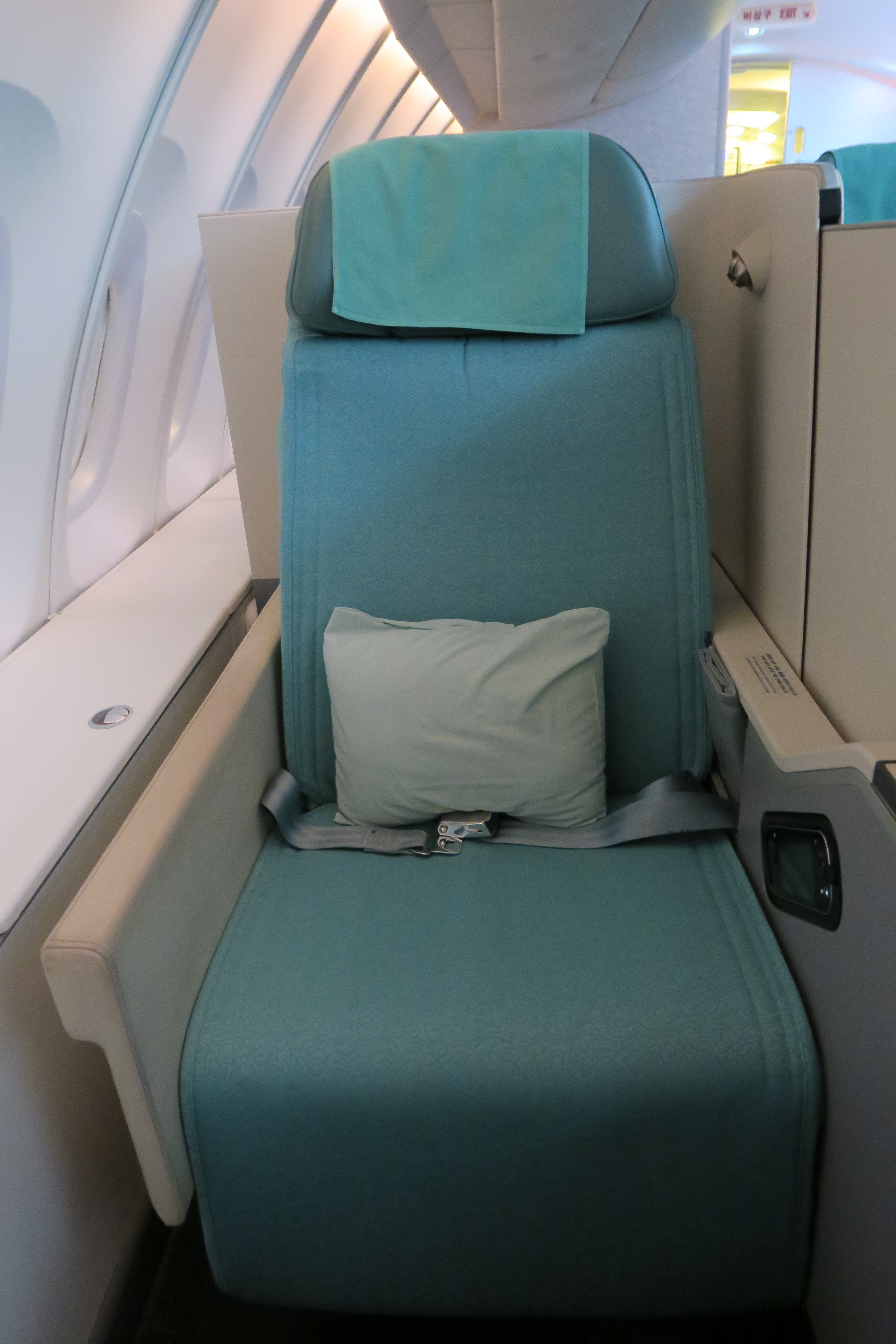 However, not all business class seats on the Korean Air 747-8 are window seats. How are the aisle seats? My impression before the flight was that they’d be almost just as good. The reason for my prediction was because unlike on the other three airlines that have Apex Suites on their aircraft, Korean Air actually has an “extended” privacy shield, so aisle passengers wouldn’t be as prone to foot traffic.

Turns out I wasn’t quite right. The issue with the privacy partitions and seat walls are that they’re nowhere as tall as the average passenger – they’re around 4 feet tall. So while the aisle Apex Suites are still quite private and above par for business class seats in the market today, you will get a bit of foot traffic, so I’d rank them below reverse herringbone seats. Of course, since the 747-8 is flown on some of Korean Air’s longest flights and it’s also their new flagship aircraft, rest assured that every business class seat converts into a comfortable, spacious fully flat bed. The biggest problem with Apex Suites is that the seats don’t have a large amount of storage. Obviously that’s a moot point when you have huge storage bins on the upper deck of the 747, and Korean Air made the effort to give the business class seats some storage space by the sides of the seat. However, you won’t be able to put an open laptop anywhere during the meal service, for example. Still, no matter where you sit, you’ll have a good flight.

Those who follow me on Instagram may realise that I didn’t sit here, however. 😉 You can probably guess what happened by now, but I’ll talk about that in a separate post.

Korean Air’s business class amenities are unfortunately rather lacking. While a pillow and blanket were featured on this three-hour flight, the pillow was around the size of my hand, and the blanket was fleece, and not quilted. Ultimately that’s perfectly fine for a three-hour flight, but Korean Air uses the same pillow and blanket on their longhaul flights, which is where they lag behind. While they’ve upgraded their headphones in the meantime from their crappy old ones back when I flew them in 2016, the headphones still aren’t great, and can’t compete with my Bose QC35s. Meanwhile, while the entertainment system interface has been upgraded since the last time I flew them, the selection is still quite limited, unfortunately. Korean Air’s 747-8s also don’t feature WiFi, which is a shame for an otherwise technologically advanced country.

So yeah, if there’s one thing that doesn’t shine in Korean Air business class, it’s entertainment.

I enjoyed my meal in Korean Air business class. Korean Air features both their outbound and inbound meal selection in the same menu booklet, and take meal service orders prior to takeoff for business class passengers. There’s a choice of main meal, but no choice of appetiser or dessert.

For appetisers I was offered a tomato and mozzarella salad, which was followed by a cauliflower soup. Korean Air usually has four main course choices for business class passengers (at least on the Hong Kong to Seoul route), and I find two of them to be very consistent. One is always offered, which is their signature bibimbap. The other is offered on most flights, which is a beef tenderloin. The tenderloin is cooked to order, which is something you don’t find in business class on most airlines.

The tenderloin was probably a perfect medium rare when it got to my seat, though I was filming the Apex Suite when it arrived, so due to how hot the plate was the tenderloin was cooked to between medium and medium well by the time I got back to my seat. Still, the meat was high-quality and flavourful, even though I wasn’t a fan of the sides that came with it. Dessert was Häagen-Dazs ice cream, which was somewhat of a low point (it’s the “safest” option airlines can go for as far as dessert goes), though at least the ice cream was kept at the perfect temperature.

I always find Korean Air’s service to be incredibly polished, though reserved due to a language barrier. This flight was no exception. All the flight attendants were smiling and willing to help, though I was most impressed by the fact that they came around to check on us every once in a while throughout the three-hour flight. On a longhaul flight it’s normal for top-notch crews on Asian airlines to roam around the cabin to see if anyone needs anything, but it was pleasantly surprising to see such great service on a shorthaul flight.

It’s granted that Korean Air lags behind a bit with the finest details of a world-class business class product – they could really use some investment into their pillow and blanket in business class, as it seriously lags behind the competition on longhaul flights.

However, Korean Air’s business class is undoubtedly a fierce competitor in the market. While not all Apex Suites are created equal (in that window seats are unarguably better than aisle seats in this configuration due to the insane amount of privacy), the aisle seats in this configuration are above average, while the window seats, especially on the upper deck, are the world’s best. Korean Air doesn’t have a meal service as polished or elaborate as their competitors, but it’s well-executed for the most part, and I really enjoyed it (and having flown Korean Air in the past, I know that this is consistently the case, as long as you’re selecting the right meals). Also, service on this flight was great, as it’s been on most flights I’ve had with the airline.

While Korean Air business class is the best way to get between Hong Kong and Seoul Incheon under normal circumstances, in this case no one decided to book a seat in the six-seat first class cabin on our flight, so we may or may not have gotten slightly lucky this time…stay tuned. 😉

Have you flown Korean Air’s 747-8 business class? How was your flight?