Skip to content
Home » SO COOL: How Our Family Scored A 747 First Class Cabin To Ourselves On Business Class Tickets!

Earlier today I mentioned that I booked business class flying from Hong Kong to Seoul Incheon. I was booked on the 747-8, featuring Apex Suites in business class. It’s in my knowledge that it’s common for airlines to assign first class seats to frequent flyers booked in business class on select regional flights, and it’s also not impossible for non-frequent flyers to get these seat assignments as well (I’ve actually done some of these seat assignments for readers in the past). However, today was a series of lucky streaks that eventually got me flying in a first class seat from Hong Kong to Seoul Incheon on a Korean Air 747-8. I decided I’d share my story, as well as some tips for how you can get assigned a first class seat on a two-class-service airline (it was more or less pure luck that we had the cabin to ourselves, though).

Being paranoid about an equipment swap in Korean Air business class…

While my parents kind of wanted to get to Seoul earlier on the 12:15 PM flight (Korean Air has four daily flights between Hong Kong and Seoul Incheon, and the 12:15 PM frequency is the earliest daytime flight they have), I managed to convince them to fly the 2:05 PM frequency, which would be operated by a Korean Air 747-8. Obviously, at the time I had no idea I’d be flying in a first class cabin, as they were still selling first class at the time. While I’d fly in the upper deck of a 747-8 over a 777-300ER (which was operating the 12:15 PM flight) any day, the 777-300ER also featured Apex Suites – I just figured there’d be less of a chance of an equipment swap. This meant that I’d feel pretty bad if we had an equipment swap on the day, since we’d have taken a non-ideal flight time and ended up with an inferior product. Obviously this was out of my control, so all I could do was hope that none of the 747-8s would go mechanical.

I was quite lax about it until checking the seatmap three days before the flight and realising occupancy was at 50% in business class and 40% in economy (and at 0% in first class). This meant that an equipment swap would actually be more profitable for the airline. Additionally, I found out on FlightRadar24 that the 2:05 PM frequency on Monday (today’s Friday) was actually swapped to one of Korean Air’s two remaining 747-400s, which was exactly what happened to our flight the last time I was booked on a Korean Air 747-8. 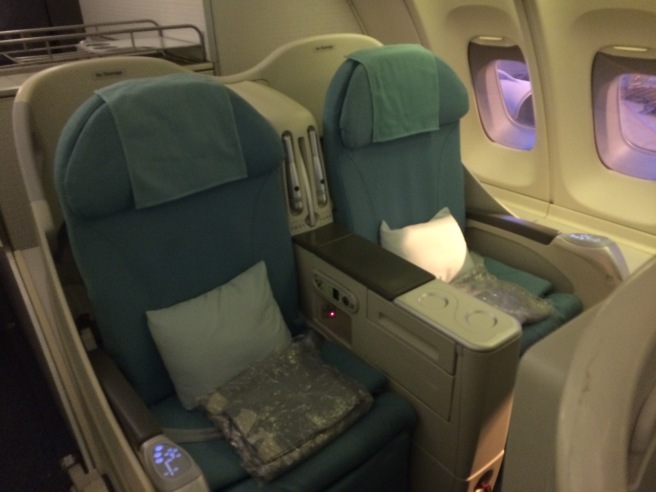 An angled flat seat is perfectly fine for the three-hour hop from Hong Kong to Seoul Incheon, but a little less exciting

While Korean Air’s older business class products are fine, at the end of the day I really wanted to review the Apex Suite, as it’s the only “generic” business class seat configuration that I’ve yet to fly. So I kept my eye on the seatmap on FlightRadar24.

Well, not only did the flight end up being operated by a 747-8 as scheduled, but we also got to sit in the airline’s flagship first class product, so I guess it worked out in the end. 😉

Wait, first class seats are on the seatmap now!

On Wednesday I went on ExpertFlyer to check if the seatmap had changed. While the aircraft type was still a 747-8, I realised that the six first class seats were showing as blocked on the business class seatmap.

Immediately I reached out to Korean Air’s call center to check for availability. While they said that the seats were up for assignment at the airport, they were clear that if the seats were available to us, we could “definitely” assign those seats on our flight.

At this point I wanted to see what I could do with online check-in. Korean Air opens their online check-in system 48 hours before departure. The big issue was that I couldn’t check-in because of a credit card error, for some reason. It had to be verified at either a Korean Air office or the airport, so we decided with the latter.

The issue was that we weren’t actually sitting together. Row 18 on Korean Air is more spacious than the rest, since there’s an emergency exit in front of it. However, Korean Air blocks seat 18H for airport selection, and even the call center couldn’t help me assign that seat. I decided to assign myself seat 19A instead, so I could switch to 18H if need be on the flight (I do believe that window seats in this configuration are far superior to aisle seats and would have been fine in 19A anyway, though it’s usually more practical to sit together with people you’re traveling with in a 2-2 configuration). Presumably I’d be able to assign myself seat 18H on online check-in, but due to an “unverified credit card”, the website wouldn’t allow me. I decided to just leave it and follow the procedures required to verify the credit card that paid for this ticket at the airport.

Headed to the airport…

We got to Hong Kong Airport a tad early in case something went wrong with credit card verification. The process went smoothly at the Korean Air check-in desk at Hong Kong Airport. However, the check-in agent said that “the first class seats weren’t for sale”, and proceeded to explain the two-class service as if I had no idea how it worked.

I knew I wasn’t entitled to a first class seat, since business class was what I booked. However, something about her condescending tone didn’t really sit well with me. When I was explaining the situation to my parents in front of her, who had also heard and understood that the Korean Air call center agent said that we could “definitely” assign the first class seats, I openly expressed that I found the situation rather unreasonable. For the time being, the check-in agent was able to assign me seat 18H, so we could sit together in a row.

I also had issues entering my SkyPass number to the booking record, and she directed me to a counter which helped me rectify the situation. While condescending, at least she was kind and polite.

Afterwards we went through security and immigration, and headed to the SkyTeam lounge (the lounge attendants didn’t have the software equipment to help us there). Surprise at the boarding gate

At 1:15 PM I left the lounge for our 1:35 PM boarding time, as we were assigned gate 60, which was quite aways from the SkyTeam lounge. I made it to the gate at around 1:30 PM, and went to the Korean Air desk just to politely slip in a last request if I could have my seat changed.

She saw my boarding pass and without typing anything in asked “you’re traveling as a group of four, right?” I said “yeah”.

She proceeded to say “we already have rows 1 and 2 assigned to you and your family, and your new boarding passes are actually printing right now”.

Since my parents were at Chanel (they were finishing up some last minute shopping so I went ahead and boarded first), they got a shock of sorts when they tried to board and were given new boarding passes. How should you grab a first class seat when it’s sold as business class?

Rarely will you ever be able to pull up a seatmap and be able to select a seat outside your cabin class. I don’t have any media affiliation or even frequent flyer status with Korean Air (I’ve earned a handful of miles on their SkyPass program, though that’s the extent of our relationship), so this “upgrade” was somewhat out-of-the-blue.

This is how a little bit of action and being on my toes ended up scoring me one of the best flights of my life. At the end of the day you should get what you pay for, so I was incredibly lucky today for a series of steps to work in my favour. However, it proved to me how important being polite, but insistent and informed can be if a passenger wants to maximise their experience. When you know your own travel inside out, it makes it much easier for you to know how you can get the most out of what you pay for in this industry.