There are plenty of resources out there on what makes a good longhaul business class seat. Among many factors, a few things many frequent flyers I know find most important in a seat are a comfortable fully flat bed, storage, privacy, and direct aisle access. A few business class seat configurations do this very well. Reverse herringbone seats come to mind.

It’s no secret that I give Cathay Pacific’s regional business class seat a hard time, and for good reason. I don’t like the seat – it’s hard as rock, storage space is limited, and the seat doesn’t recline into a comfortable position. In fact, I consider Cathay Pacific’s own premium economy class seat to be nearly as good.

After flying shorthaul around Asia on numerous different airlines, I’m starting to realise that Cathay Pacific isn’t behind the industry standard because their seat is actively bad. Southeast Asia simply has too much competition for regional flying. That’s no fault of Cathay Pacific’s, though I have flown in quite a few regional business class seats that I’ve found substantially better.

Over the course of quite a few flights featuring medium-haul configurations, I feel like I’m starting to pick up some values that aren’t coherent with what airlines say passengers want. I’d like to share them here, purely to see if you agree with me.

Let me emphasise. Asia is the world’s best continent for regional flying. By a mile. If you are reading this post from an intra-European business class flight right now, I apologise and wish you the best of luck. Why? When flying intra-Europe on almost any airline in business class, you’re talking about 30-inch seat pitch, with a guaranteed free middle seat.

Even in the U.S., a recliner is considered a very solid business class seat for non-transcontinental flying. Meanwhile, in Asia, the same type of seat is considered pretty subpar.

Now that I’m over gushing about how good Asian regional flying is, it’s time to start talking about the minor gripes that I have. Once again, these aren’t deal-breakers, though I consider them missed opportunities on the seat design front.

When asked about Cathay Pacific’s new regional business class product that they’ll introduce next year, a Cathay Pacific executive said that “you don’t need [a fully flat bed] for a couple of hours’ flight and, given how many seats you’d need to compromise, it doesn’t make commercial sense”. And he’s right. No one needs a fully flat surface to sleep on for a couple of hours. (Of course, with Singapore Airlines being Singapore Airlines, they delivered their new regional 787s with staggered business class seats similar to Hong Kong Airlines’ longhaul configuration, but not every airline has that kind of budget.)

What passengers are paying for flying business class longhaul include, in terms of hard product alone:

How my values differ for shorthaul flights

During shorthaul flights, I’ll most likely stay awake, have a nice meal, and work for a while. Yes, I don’t need a fully flat bed. Apart from Singapore Airlines (who designed their seat off a longhaul seat concept), though, no airline has gone so far as to make their regional business class direct-aisle-access.

Hong Kong Airlines manages to cram 32 fully-flat, Solstys-style staggered business class seats in the same space that they can only fit 30 angled flat seats. Chances are if they made those seats angled flat (or lazy-Z position) for regional flying, they’d be able to fit in, potentially, an extra row or two. That’s density, but at least direct aisle access isn’t sacrificed (if not storage space). That’s what I can think off on the top of my head.

Furthermore, being an inflight workaholic, something I cherish is storage space. Cathay Pacific has tried to maximise the storage options they have with their seat, though objectively there’s not much storage space apart from a nook to store a phone… 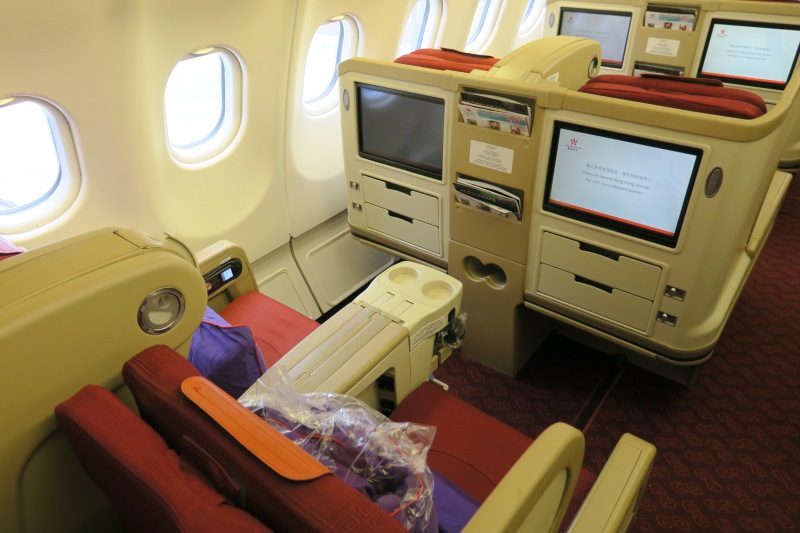 Why? The seats themselves are really well-padded, though more than anything I love how these seats are designed. They feature privacy, due to the “winged” seat shell, even if you’re sitting in an aisle seat. Another fun feature is that if you’re not sitting in the bulkhead, there are two storage compartments where you can stow small belongings during takeoff and landing. Installing these nooks in economy class seats has become a trend, though this seems to have all been forgotten in business class seats.

Regional business class still comes at a premium over economy class, and in many cases flying in an airline’s regional configuration costs the same as flying them on a longhaul aircraft on the same route. I’d love to see airlines put more thought into regional business class, instead of just densifying the cabin – I’d love to see direct aisle access implemented somehow, someday, though in the short run I’d really appreciate airlines beginning to install privacy partitions and storage compartments on their shorthaul seats as well.

Meanwhile, I’d love to see airlines in Europe and the U.S. up their game to a point where they can even begin to compare with the Asian airlines I’ve talked about above.

What do you look for in a regional business class seat?