Wow, I’m learning something new about this airline every day. Last week I flew from Hong Kong to Osaka roundtrip on Hong Kong Airlines, and just yesterday I posted my review of the outbound experience. Both my flights on Hong Kong Airlines were great, and in many ways the airline measures up to Cathay Pacific. There’s an issue with hard product consistency at this airline, though. While their soft product is consistent as ever (the same excellent bedding is featured on shorthaul and longhaul flights, the same good headphones are offered, the meal service seems similar, etc.), I can’t get over how many types of hard product this airline has in business class.

The airline’s eight longhaul aircraft feature their excellent staggered business class seat, and three of these are A330-200s that used to run their all-business class route from Hong Kong to London Gatwick, so the A330-200s even feature a small onboard bar. 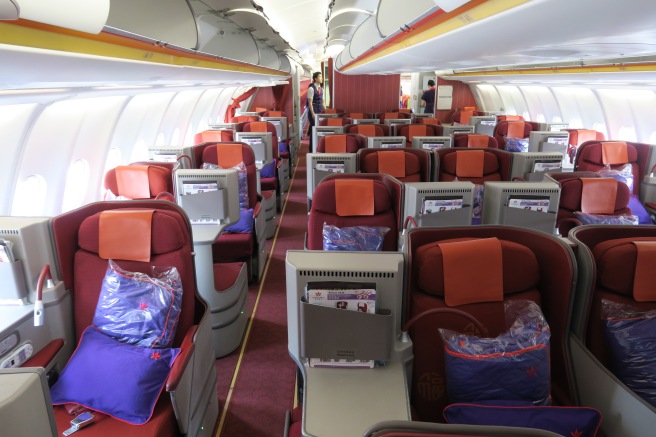 Then they got five A330s from Singapore Airlines, which preserved Singapore Airlines’ cabins across both classes. Hong Kong Airlines runs these aircraft primarily on regional routes, and I find their business class seats to be some of the best angled flat seats in the industry in terms of comfort and design. Then Hong Kong Airlines’ own regional business class product features a different, and in most cases inferior seat. The catch is that they run that product to Auckland. The flight from Hong Kong to Auckland is only marginally shorter than their two A350 flights to the West Coast, so you’d think they’d at least try to invest in a better hard product, no? Well, apparently that isn’t enough. Hong Kong Airlines has leased five A330-200s from Emirates, and the first is already flying. They were bought by banking company Avolon, who preconfigured this aircraft prior to Hong Kong Airlines buying them, so Hong Kong Airlines didn’t get to choose their seat configuration on these aircraft. This means that the airline now has a sixth widebody business class hard product flying.

Triplust.world has a cool review of a Hong Kong Airlines flight in this configuration, which seems to feature fully flat beds in a rather unique 2-2-2 configuration (the only other airline I’ve seen with this specific type of configuration is Hawaiian). I’ve nipped a photo from ychxk, who wrote the review. I reached out to Hong Kong Airlines, who said that “[these aircraft] were completely refurbished with new cabins including seats, galley and IFEs. […] They are fully flat beds and receiving great feedback from customers. These aircraft are designed for regional routes and therefore offer a very competitive product.”

If these aircraft really are receiving positive reviews (ychxk seems to disagree, though I haven’t flown the plane so won’t add any comments), I don’t get why they wouldn’t fly one of these planes to Auckland. The first of these planes, B-LHA, has been cycling between Bangkok, Taipei, Denpasar, and Hong Kong. The angled flat seats that they fly to Auckland have got to be replaced, and this seems like the prime time for Hong Kong Airlines to fly this product there instead. Ultimately a lot of this is out of Hong Kong Airlines’ control, since they leased the planes in hopes of expanding their fleet, and didn’t get to choose their seats. However, it is a little amusing that there are now six different business class widebody configurations that you might get while flying Hong Kong Airlines. Since this configuration features fully flat beds, I’d assume it’s better than their angled flat configurations, though inferior to their own longhaul product. I’m also excited to see what they pull out of the bag with their A350s – I’ve been told the new seats will be great.

The only thing where I really blame Hong Kong Airlines is for flying this configuration regionally around Asia, while continuing to fly their angled A330-200 product to Auckland, which seems like a bit of a wasted opportunity. I’m assuming that once they take delivery of the other four aircraft, passengers flying to Auckland might potentially start seeing this configuration.

Have you flown this version of Hong Kong Airlines’ business class yet? If you have, feel free to report back!