Thai Airways features angled lie-flat business class seats in business class arranged in a 2-2-2 configuration. I got the exact same airframe as I’d flown from Hong Kong to Phuket two years prior, and unfortunately that plane was (and still is) falling apart. Fortunately the seats themselves are well padded, quite comfortable, and I was able to sleep in them (which may just be a function of me being on four hours of sleep from the night prior). 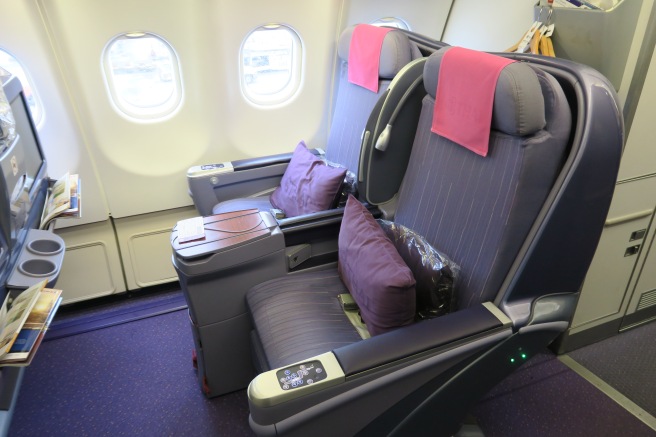 After so much of flying the A350, A380, 777 and 787, the A330 sure feels cramped, as the windows are tiny and the overhead bins are lower and smaller as well. Obviously, though, that’s a function of how jaded I am and not a fault of the airline.

Thai Airways’ amenities are high quality, at least in terms of what they do provide. My headphone jack didn’t work, but the headphones were comfortable on the ear and apparently (according to my dad) came with some decent sound quality as well. The pillow was big and supportive, and the blanket was quilted and comfortable. Those are the three amenities I care about the most by far, so I was a happy camper, though they didn’t offer any other amenities at all. 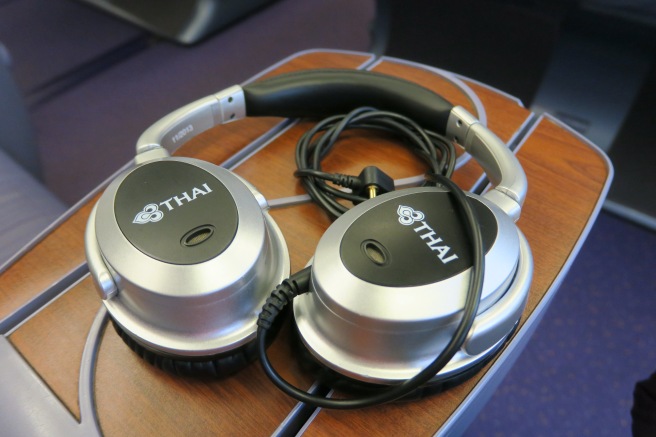 I was rather impressed by the quality of my dim sum dish, though it was by far the best choice of the lot. All four pieces of dim sum tasted good, and looked fine as well (when you factor out the disgusting soggy piece of cabbage that initially covered the plate).

Service was fine. The flight attendants were friendly on the most part, and a couple of them were downright indifferent. I barely had any interaction with the flight attendants aside from during service and when they asked me to put my window shades up before landing, though they were smiling and seemed happy to be there.

Overall, I thought that Thai Airways’ business class was mediocre at best. That said, I think that Thai Airways does an excellent job branding themselves, and I wouldn’t hesitate to fly them again.

Why do I say that? That’s because Thai Airways publishes their service concept as to provide a simple, functional, cost-effective and user-friendly solution that allows airlines to undertake efficient and profitable operations. I believe that Thai Airways is brilliant at delivering what they promise, which is a middle-of-the-road business class product at affordable prices.

Would I prefer an amenity kit on the short flight between Hong Kong and Bangkok? Sure. Would I appreciate an appetiser that wasn’t just a few fruits cut in quarters? Yes, I would. Would I appreciate something Thai on the menu that didn’t taste like it had been refrigerated for years? Definitely. However, at ~HK$4,000 (much less than what Cathay Pacific can charge for a business class seat on the route), Thai Airways certainly isn’t underdelivering, which I appreciate. For that reason, I wouldn’t hesitate to try Thai Airways again.

One thought on “Thai Airways A330 Business Class In 5 Pictures – Why Do I Enjoy Flying Thai Airways?”