Earlier in June, I had the opportunity to fly Cathay Dragon First Class aboard their A330 to Beijing and back. While there is significant coverage of Cathay Pacific/Cathay Dragon business class here on the blog, this will be the first international Cathay Dragon first class review on the blog. This post will mainly be focusing on the highlights of the flights and the main differences when compared to Business Class. 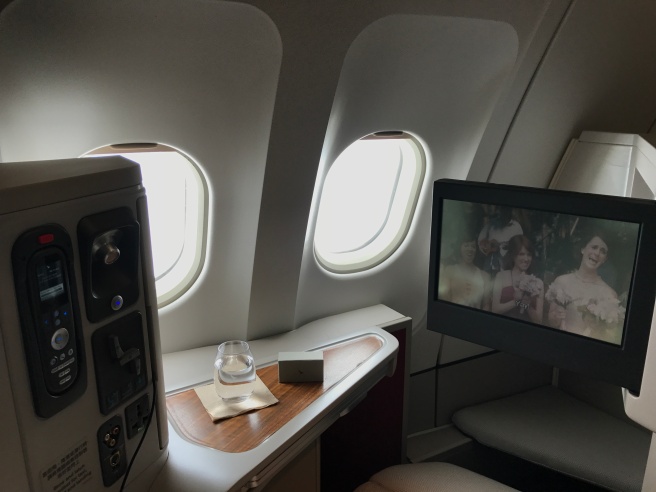 I actually paid outright for the round-trip full fare (Fare Class F) First Class flights. I ended up paying around HKD$14,670 for the flights which is quite a lot of money, but considering the Business Class fares at the time which sat somewhere around $11,640, and the upgraded service and meals that I would receive, I went ahead and splurged for it.

In Beijing, there was one counter open for First Class and it was empty. And from the looks of it, the Business Class counters were also empty, probably as we arrived 1.5 hours before departure.

Because I arrived at the airport  fashionably late, I only had around 20 minutes in the lounge. Cathay Dragon First Class Passengers have access to Cathay Pacific’s wonderful First Class lounges, The Wing and The Pier (review coming very shortly).

While at The Pier, I only had time for a starter, so I indulged in a Canadian Winter Crab dish that was very small, portion wise, yet was scrumptious.

On the return however, I had access to the Cathay Pacific Business Class Lounge at Beijing Capital Airport. Cathay Pacific doesn’t have a separate First Class Section at the lounge, unlike its outstation lounges in Tokyo Haneda, Vancouver and London Heathrow. I’ll review the lounge in a separate installment.

Because of the premium heavy aircraft and the elite heavy loads on flights to Beijing, the Business Class Boarding Queue will usually be 30-35 people deep. However, as a First Class Passenger, I had access to a special boarding lane (that Marco Polo Club Diamond Members and OneWorld Emerald Members have access to as well) that ensured I was one of the first people on the plane.

4. A Much, Much Better Seat

While on Cathay Dragon Business Class, you will be seated in a moderately uncomfortable seat, that only reclines to a very limited extent. This problem is non-existent in First Class. First Class seats are identical to Cathay Pacific’s longhaul Business Class product, except for the more luxurious colour scheme. These seats have abundant legroom, several storage compartments and most importantly, are lie-flat. 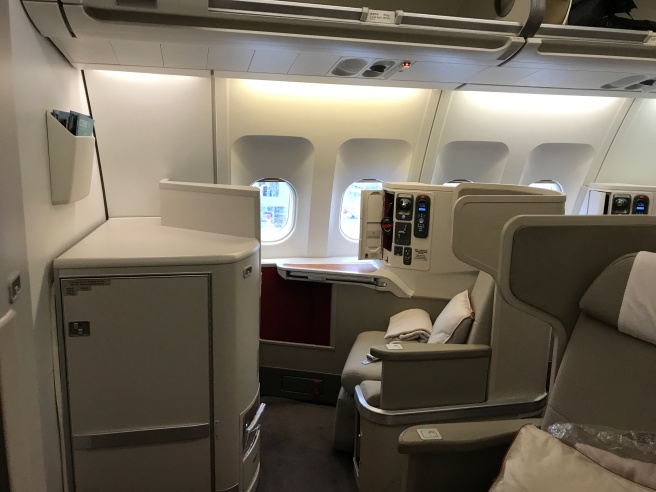 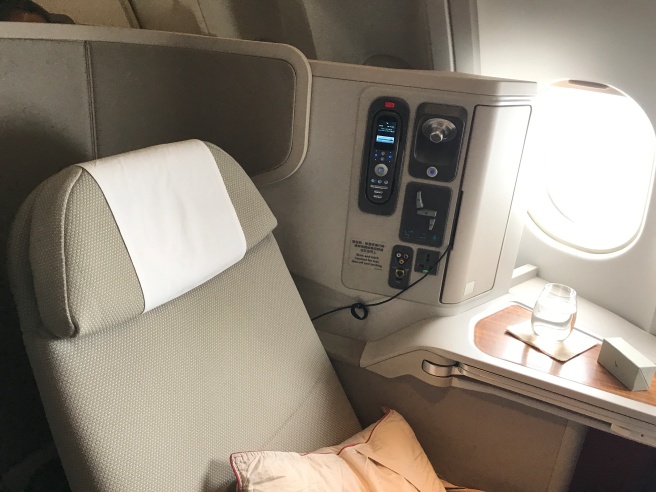 As a Business Class passenger, the level of personalisation and attentiveness in the service will most likely be lower on such a short flight, and it is not abnormal for meal services to feel like service lines (unless you are a Marco Polo Club Diamond Member, where your food will be served first, and you will be addressed by name throughout the flight).

In First Class, you will be addressed by name at every interaction with the crew, there  should be a member of the cabin crew at your call, and your drink preferences will usually be remembered through the flight.

On the outbound flight to Beijing the service was perfect, and detail-oriented to a ‘T’. When meals were to be served, the table was laid perfectly, with careful attention to positioning. Logos were always facing the passenger, and the crew would be at your seat seconds after pressing the call button.

However, one major complaint that I had with the cabin crew on my return flight is the simple lack of empathy and a customer-oriented attitude. At one point, I wanted a drink refill, and since there was no sight of a flight attendant, I pressed the call button. However, after 10 minutes, nobody tended to my request. I decided to get up from my seat, and got into the first class galley, where, to my surprise, there were no flight attendants. I was very angry at this point, and went into the business class cabin, and asked for the Inflight Service Manager to express the inconvenience I was going through. However, she was very hostile, and was not apologetic whatsoever, which gave me a bad impression of the flight overall.

Menus will also be presented to you along with an explanation of the courses, and flight attendants will, in theory, greet you and take you to your seat upon boarding the aircraft. This was not the case on my return flight, where the Inflight Service Manager simply said “1A, this way” and pointed to my seat. This definitely isn’t the norm on Cathay Dragon First Class, and after reviewing my notes from the flight, it’s clear that the problem wasn’t the crew as a whole, but rather one particular flight attendant, the Inflight Service Manager.

However, the service that I experienced on the return flight wasn’t up to the regular standard, and I wouldn’t let it put a damper on your expectations.

While Cathay Dragon’s Business Class Catering is a hit or miss, with an exceptional meal on one flight, and tasteless and stale meal the next, Cathay Dragon upholds a consistently high standard for its First Class Catering. The food I indulged in on the outbound flight was catered by the Park Hyatt Hong Kong, and on the return by The Aria, at the China World Hotel in Beijing and was restaurant quality for sure. 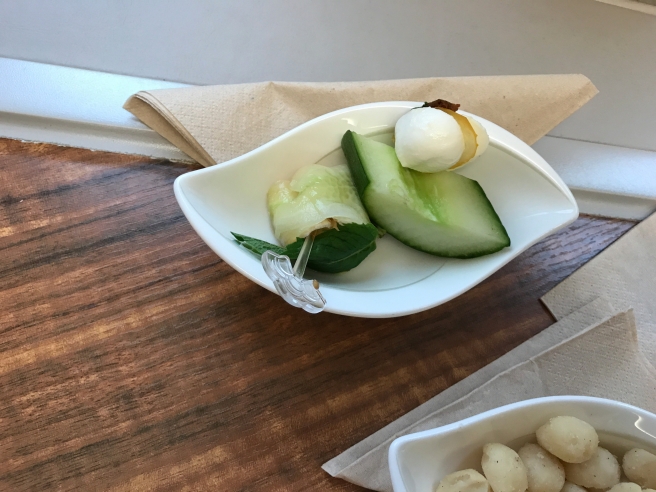 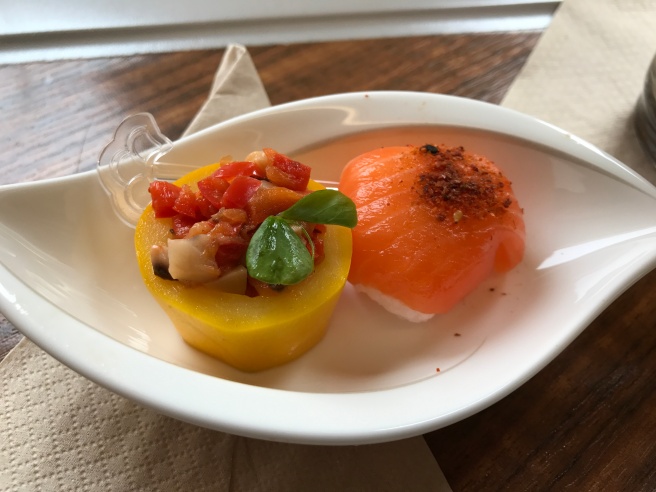 For reference, here’s a few pictures of the food courses on both flights (As the beverage menu for both flights was the same, I will only be including it once): 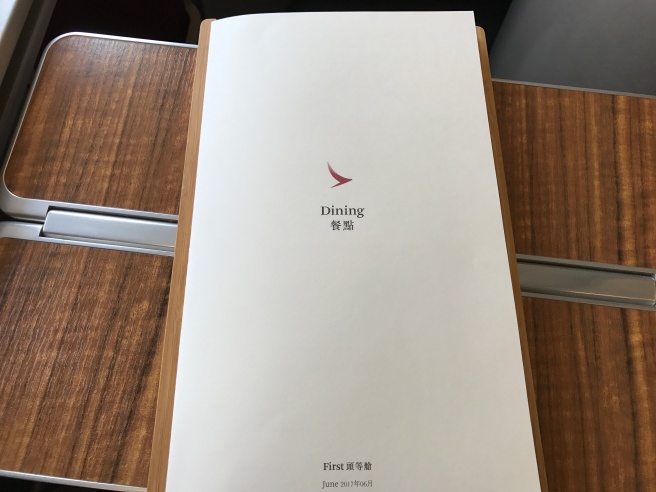 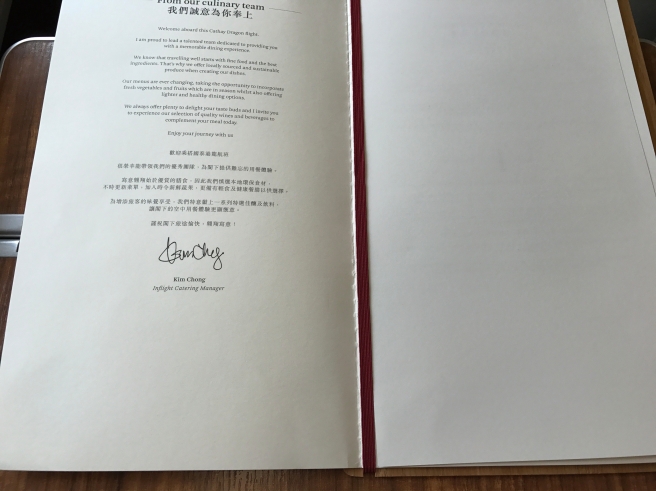 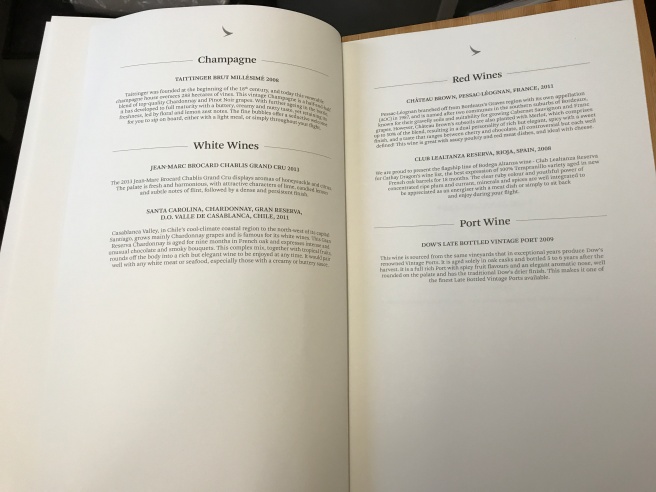 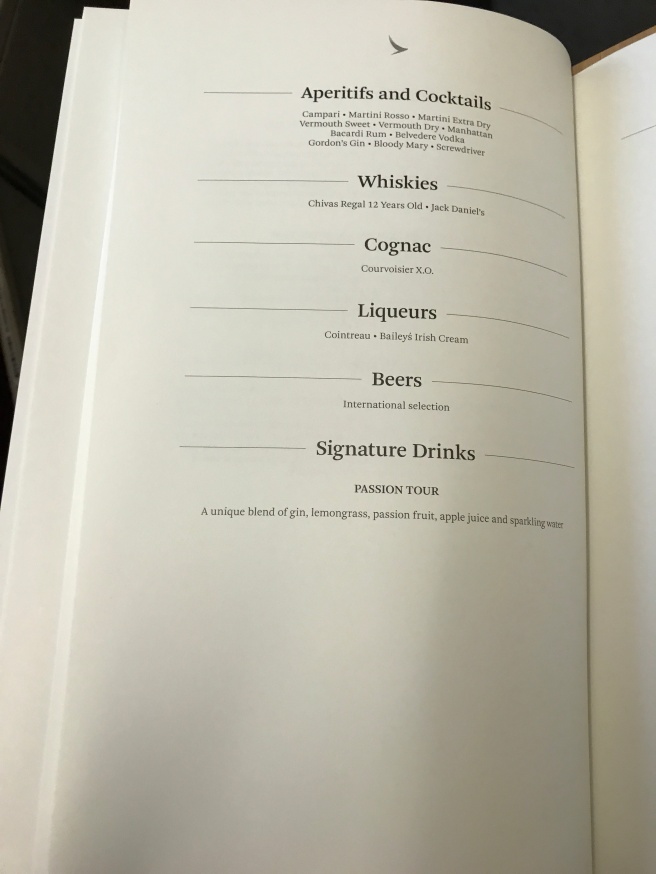 The starter on the outbound flight was a fresh fruit plate, which was odd given the 3pm departure, but nevertheless was tasty. As you can see, the table was laid to a simple yet high standard.

Soon after, a variety of breads were offered to each passenger. I selected Garlic Bread. Cathay Pacific and Cathay Dragon never fail to impress with their Garlic Bread!

The main course I selected was the only one catered by the Grand Hyatt, the cod fish. I cannot emphasise how good this dish was. The taste was perfect and the black-bean sauce really gave it a kick. The fish was flaky and it melted in your mouth. It was probably the best dish I’ve ever had on an airplane.

Although there was no cheese course on this flight, the dessert more than made up for it. It was so good I forgot to take a photo of it before digging in. The polenta cake was rich, and not too sweet, and the ice cream complimented it nicely.

Here is the menu for the return flight:

(I should point out that First Class Passengers have the option to dine whenever the want. And due to a confirmed delay of upwards of 80 minutes on the ground in Beijing, the Business Class and Economy Class meals were served, and First Class Passengers had the option to dine. I finished my starter, soup and main course on the ground, and asked to be served my cheese course and dessert once we were airborne.)

At first I thought that there was only going to be an Asian Menu, which was slightly disappointing. But to my delight, there was a Western Menu that looked really good. Except for the main course. However, there was a silver lining. At the bottom of the page, in fine print, the menu mentioned a vegetarian option which I promptly inquired about. Thankfully, it was a ricotta dish that sounded delicious. They only catered one portion, but luckily, I was the first to ask.

There was a starter and soup course on this flight. The starter was a tuna salad, that, while cold, checked all the boxes. 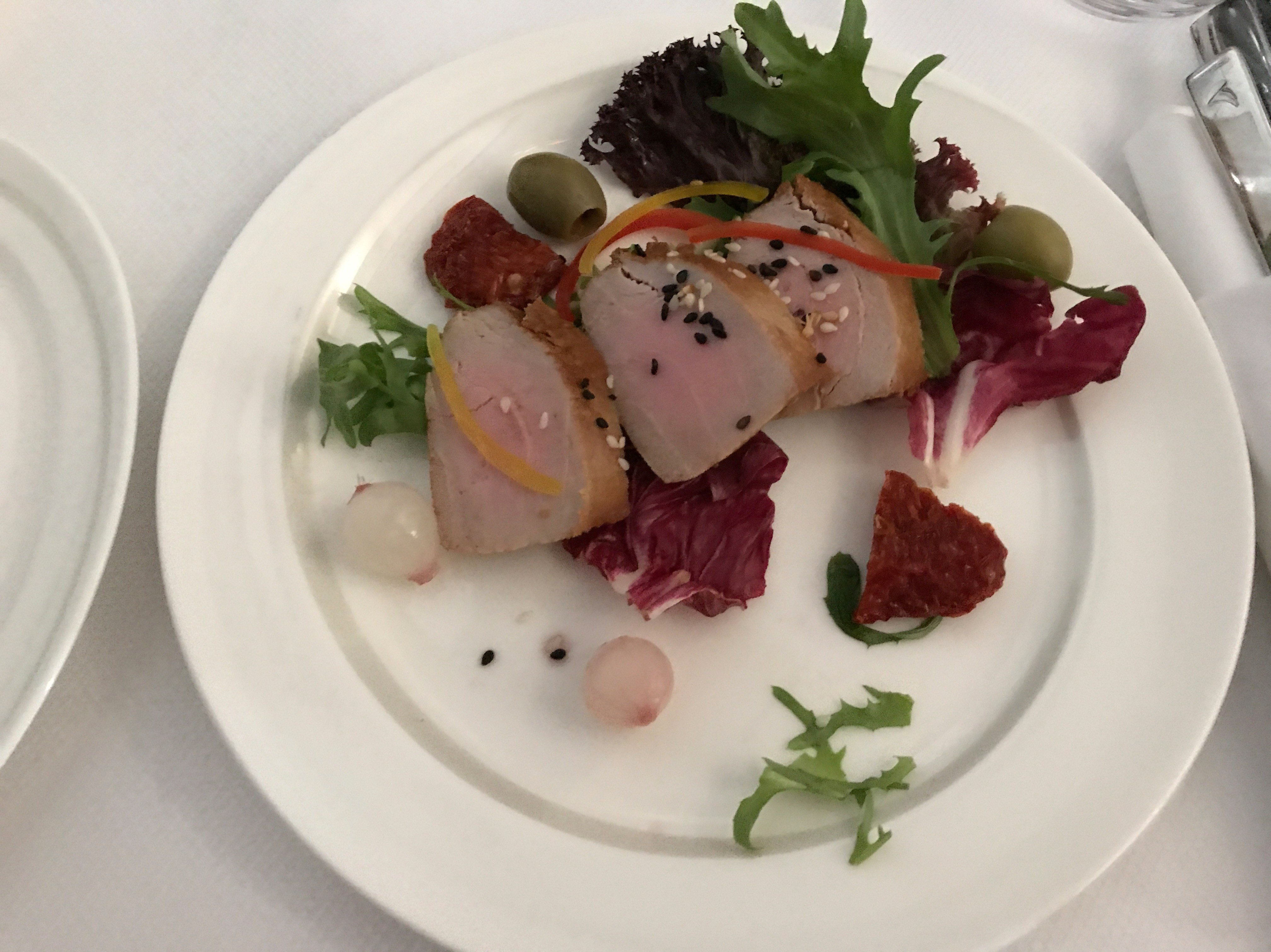 Next up, there was a soup. While very creamy, it was not overpowering in terms of sweetness which is usually the case with cream-based soups. Along with the seafood, it was a great dish.

The main course came next, and it did not disappoint. The dish was cooked to perfection, the tomato sauce was just right, and there was a good balance between the amount of cheese and the portion size. This was easily one of the best meals I’ve had onboard an airplane. 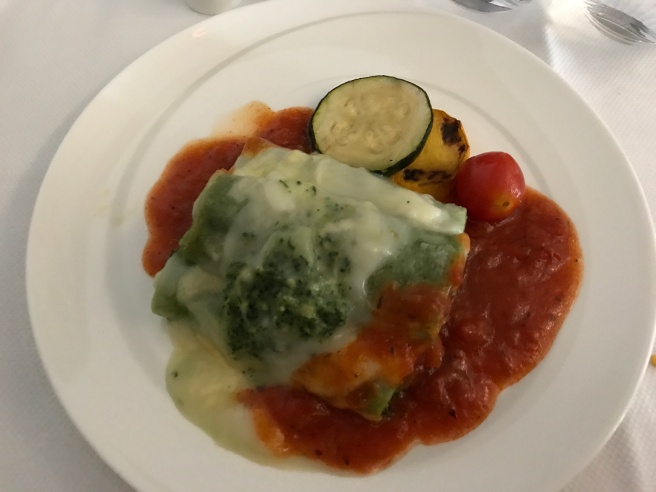 Once airborne, I was served a cheese course, along with a ramekin of nuts.

The cheese was normal, nothing special and it was served with carrot and celery sticks, along with a few nuts and a apricot.

The dessert was phenomenal on this flight, it was presented perfectly and tasted amazing. Simply Decadent.

Throughout the flights, the main drink I went for is the Hong Kong Style Milk Tea. It really hit home, being born and raised in Hong Kong.

Cathay Dragon First Class is a great way to fly. Although the service standards and hard product aren’t in the same league as Cathay Pacific First Class, the catering sure is. However, everything about this product (except the identical hard product) is miles better than Cathay Pacific Business Class which tends to feel like a service line. But it all boils down to whether or not it’s worth the HKD$3,000 premium over Business Class on the same route. And in my opinion, all else considered, unless you plan on taking the only two overnight/red-eye flights between the two cities or need to be well-rested for the next day, the substantial premium isn’t really worth it for a short flight like this.

While there is huge business demand between the two cities, most businessmen looking to fly between the two cities will probably be looking for cost and convenience above all else, and because the ground experience in Hong Kong and Beijing will, (for the most part, barring lounge access of course,) be similar, it is hard to justify paying an almost 30% premium.