Cathay Pacific has long offered one of my favourite economy class products. Generally, the crews on flights are great (though I haven’t flown in Cathay Pacific longhaul economy since 2014), and I’m such a fan of the hard product, which is wide, nicely cushioned and well-designed. I haven’t managed to fly the seat longhaul, though I’ve flown it around Asia a few times, such as between Hong Kong and Jakarta, which I’ll review by tomorrow.

Last October I hinted that Cathay Pacific was going to go 10-abreast on their 777s, which was a move that we were all sad to see happen, though I think most of us saw it coming.

I think it’s worth posting that Cathay Pacific has confirmed these changes and will start overhauling their aircraft mid-year. 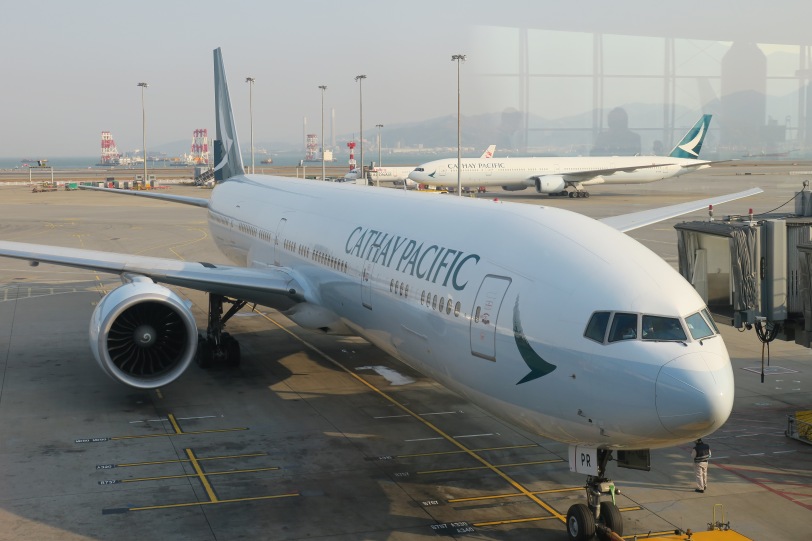 Cathay Pacific has constantly stated that they’ll try to assuage the pain in 3-4-3 economy configurations by adding as many amenities and added comfort to the seat as possible. Changes will include better padding (is that even possible?), reduced inflight entertainment box protrusions, and the headrests will be more akin to the new A350 economy class seats, which have “cradle” headrests that allow easier sleeping.

Hopefully, Cathay Pacific will actually follow up with these changes and create one of the most comfortable products among the 3-4-3 777 economy class seats. I know that’s an oxymoron, but if you don’t try, you never know.

SCMP has also outlined the dimensions of the seat, which are as follows:

“We are not alone. Actually, we are late in the game… But the overall customer experience is a lot more important than whether it’s a 3-4-3 or a 3-3-3 configuration,” Paul Loo, Cathay’s director of corporate development and IT, told analysts during the results release earlier this month.

Sure, Mr. Loo, but I feel like my chances of voluntarily taking Cathay Pacific 777 economy post-retrofit are going down the…loo.

Cathay Pacific’s 777s will be undergoing a net increase of a few seats per flight, but that can lead to about 4 million seats per year with all the 777s that they run:

In a way, I’m sad to see all these precious economy class seats on their 4-class 777-300ERs go in lieu of just 19 more economy seats, but I guess it all adds up to quite a bit of revenue, especially with the losses they’re making these days.

It’s almost a blessing for those seated in Cathay Pacific’s 777-300 economy class, to be honest. While their shell seats aren’t dreadful, they’re not comfortable in the slightest…

Ultimately I’m devastated that Cathay Pacific is shrinking economy seats, and will make an effort to avoid these seats in the future. I still want to give their new seats a try, though I really don’t have high hopes, and know that the airline’s reputation is going down.

However, it’s worth noting that Cathay Pacific just turned a couple of massive losses, and their planes can be really packed during peak season. So overall, I’m hoping that they turn a couple of profits after this happens, so it’s not a wasted effort that just makes passengers feel less comfortable.

Personally I wish Cathay Pacific luck with these new seats, but I doubt I’ll be a fan of them.