I was walking at a brisk pace, so the lead purser said “Stop!” at the entrance. He then had a look at my boarding pass and guided me to seat 7A, which is at the very back of the cabin.

I asked if I could take some pictures, and he said yes, though he asked, “for what purpose?” I responded with the speech that I had prepared in case I was asked when taking pictures onboard an aircraft – I love flying, I love taking photos, I always like being onboard first so I can get great pictures of aircraft, etc.

He then asked if my camera was a Powershot G3. I replied it was a G3 X, then he said “nice, I like taking photos too”.

While Swiss and Lufthansa have the same seat on their A321s, Swiss’ colours are so much better chosen than Lufthansa’s colours. I kind of felt like I was in a warehouse – I can’t believe that they underwent a retrofit, as they look old as ever. The seats weren’t comfortable by any means either, even for economy seats.

Even the orange seat covers on the “blocked” seats failed to provide any pizzazz to the cabin. Lufthansa’s cabins are sterile as can be. 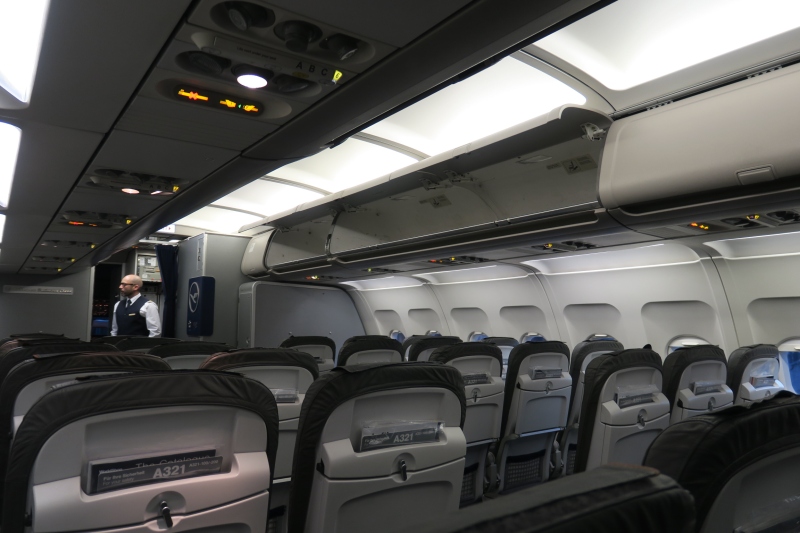 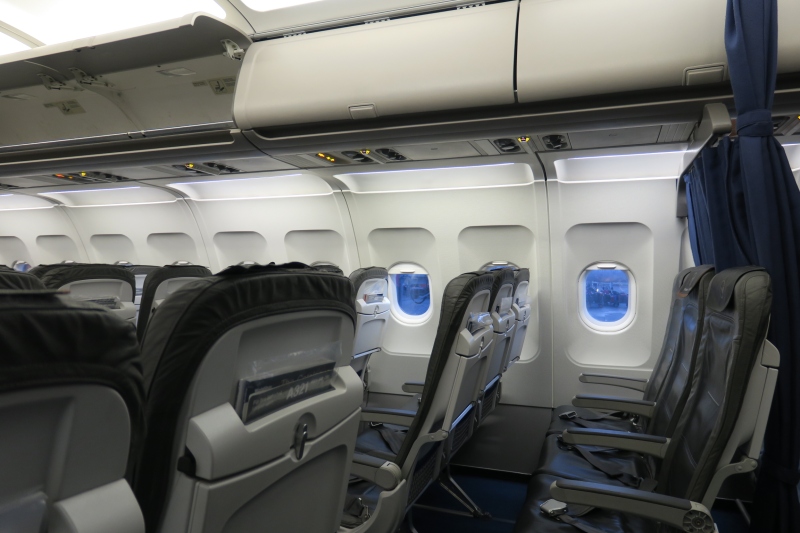 Lufthansa’s legroom is fine, though unlike Swiss there isn’t any extra legroom. I think it shows in the below pictures that the seats are pretty tight, though I still managed to be somewhat comfortable for the hourlong flight. 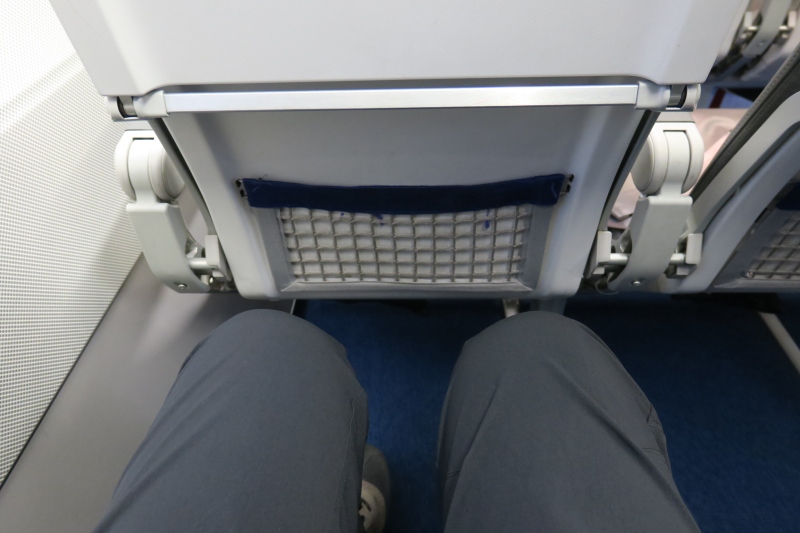 The cabin was empty for basically the first minute after I got in, as everyone was still slowly making their way down the jetbridge.

There wasn’t much to explore at this seat, though I believe they are made out of synthetic leather (much like the seats on Swiss’ A321). 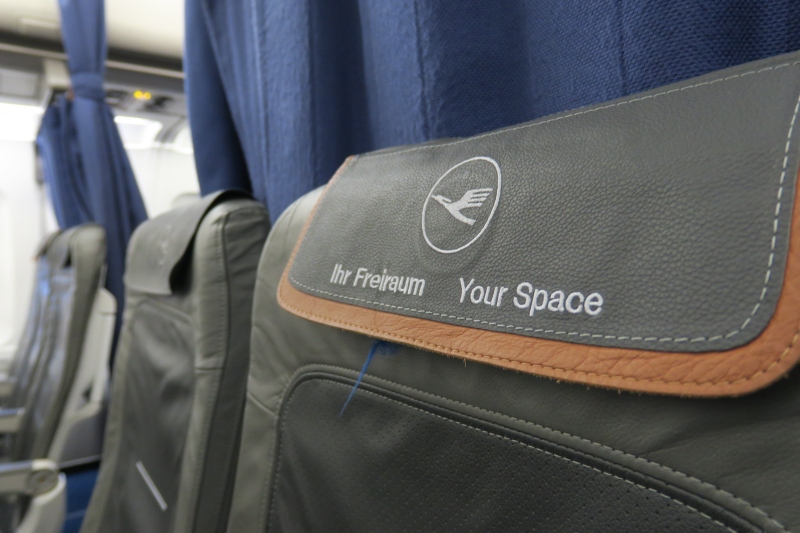 The tray table isn’t fold-out, so there’s only one size. It’s a good size for working, though the lack of a fold-out function makes it really hard to get out of your seat if you need to go to the loo during the meal service.

The seats also featured air nozzles, which I valued immensely throughout the flight as the cabin was quite warm.

Seated on the left side I had a view of some interesting aircraft, but it was a depressing day on that side. 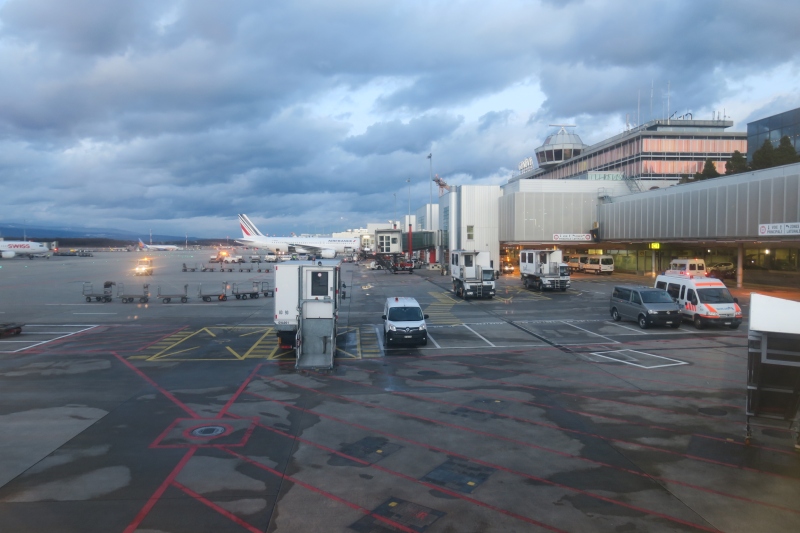 The view from the right side was much more compelling, and featured some SAS aircraft in a beautiful backdrop of clouds. 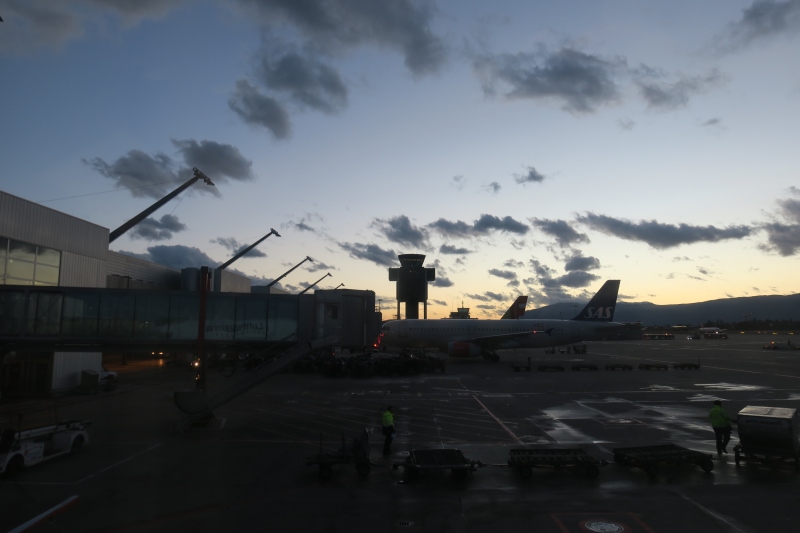 Parked a few gates from us was an Air France A320.

A Swiss A320 also taxied by as boarding continued. My parents soon came onboard, and made their way to just settle into row 6. My mom sat in 6D, which I explained wasn’t a seat that “belonged to us”. Obviously I wasn’t clear enough, as she decided to stay there, which made my life of switching seats much harder.

Soon the guy sitting in 7A came, and after scrutinizing the seat, he agreed to his seat switch. It’s worth noting that row 7 doesn’t recline, as the curtain is right behind, though I don’t think that was relevant to any of us during the hourlong flight, especially with the seat pitch of 30″. I thanked him profusely and switched to 6F admiring the sunset outside the cabin.

Soon the airport lights came on, making for a slightly more “orange” view.

The SAS 737 also pulled out of the gate after it got darker, and instead it was replaced by another Swiss A320.

The purser Simon came and formally introduced himself to all the business class passengers, and I found it especially amusing that he gave our family fist pumps, starting from my sister. Even my mom got a fist pump, which was fun to watch.

The safety video soon played, and as this 23-year-old aircraft didn’t feature drop-down television screens, a manual safety demonstration was made. Simon didn’t hesitate to make his quirks during the safety demo. A few examples are as follows:

I’m not sure what was funnier – the silence after his jokes, or the smug smile that he gave after he delivered his one-liners one by one. I commend Simon for making this safety briefing interesting, as I’m sure no one would be listening otherwise. I can’t stress how much I like it when airlines or individual pursers inject humor into safety briefings – it makes everyone listen to them, which is much more effective then just trying hard to make something look “professional”.

We pulled out of the gate at around 6:30, and taxied past some interesting aircraft, including another Swiss CS100 and a few Easyjet aircraft, among others.

Further in we taxied past the Etihad A330 we saw earlier, as well as an Air China A330, which I would have rebooked myself on had the check-in kerfuffle gone wrong. 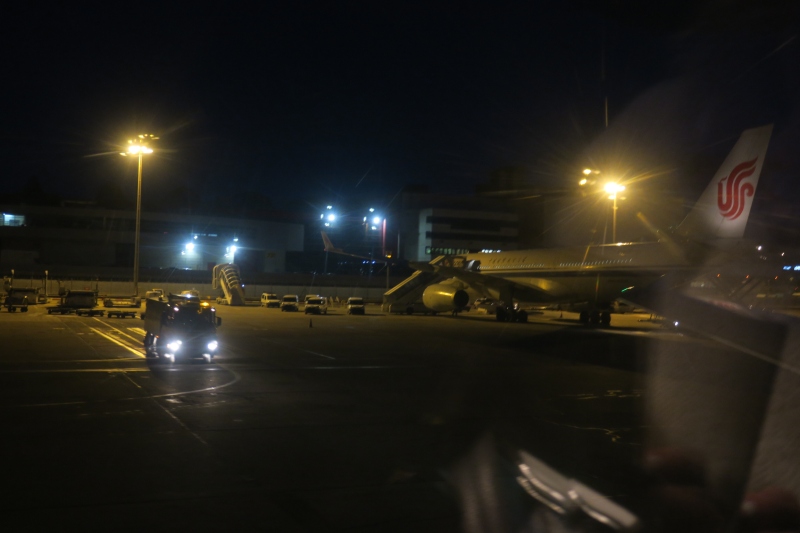 I was also interested when I saw a fire brigade training 737-200 parked near the private jets. This is the first time I’ve seen an aircraft dedicated to an airport’s training.

We were then first in line for takeoff, taking off at around 18:45 and having amazing views over Geneva as twilight faded. 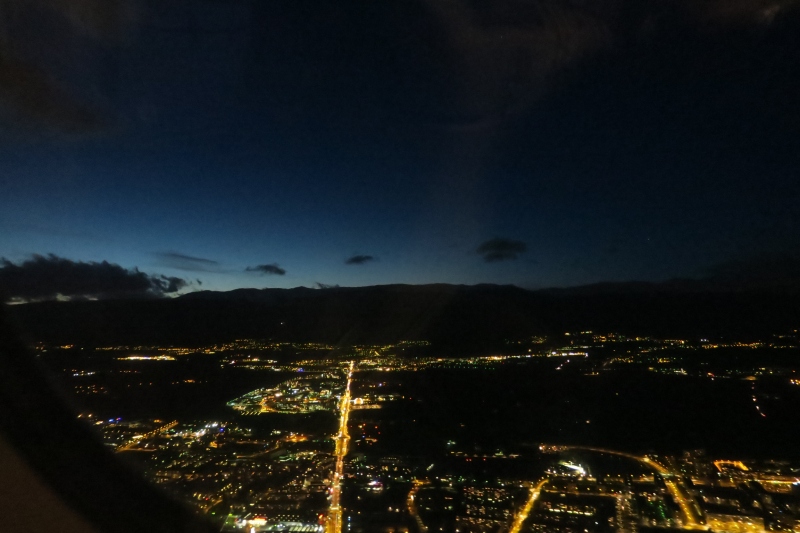 After takeoff I decided to ask Simon about my connecting flight, and he decided to refer me to the inflight magazine, as I could see that he was busier than expected. 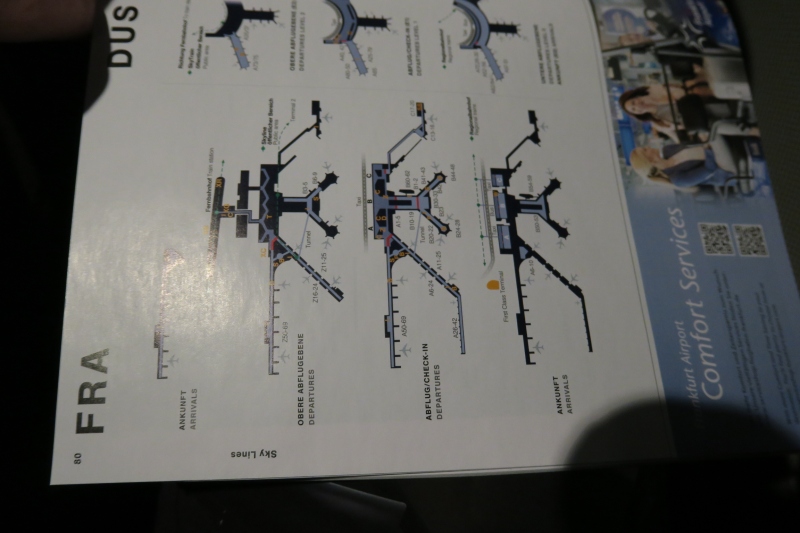 We were then served a meal. While Simon was polished, attentive and couldn’t have been better, the other flight attendant was borderline sloppy. She just plopped a tray on everyone’s table without really asking them whether they wanted to eat or not.

The actual meal featured two courses. The dessert was a simple panna cotta with raspberry sauce, and hit the spot. 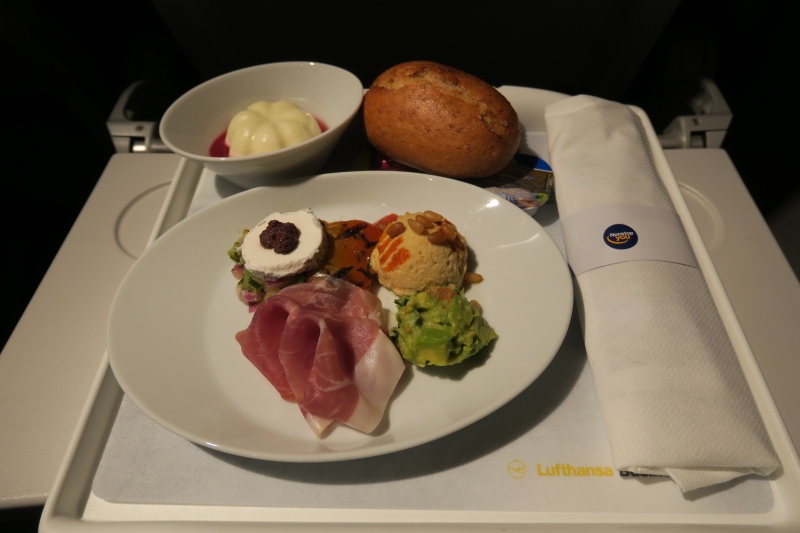 I’m not sure how to describe the main meal, other than the fact that there was parma ham, guacamole, hummus and feta cheese with vegetables. It was hard trying to find a combination with anything on the plate, so I decided to use the bread as a dip. So while each individual element on the plate tasted great, the four elements added together just didn’t do anything for me – it’s like trying to merge Cathay Pacific, Emirates and Virgin Atlantic, the combination doesn’t work.

I knew I’d be working until late on my connecting flight because of the science report I had yet to do, so I ordered some tea to keep myself awake. It was good.

I wanted to pass on the nougat chocolate that came with the meal, as I’m not a fan of pralines. However, Simon said that we had to try these, and they were great. 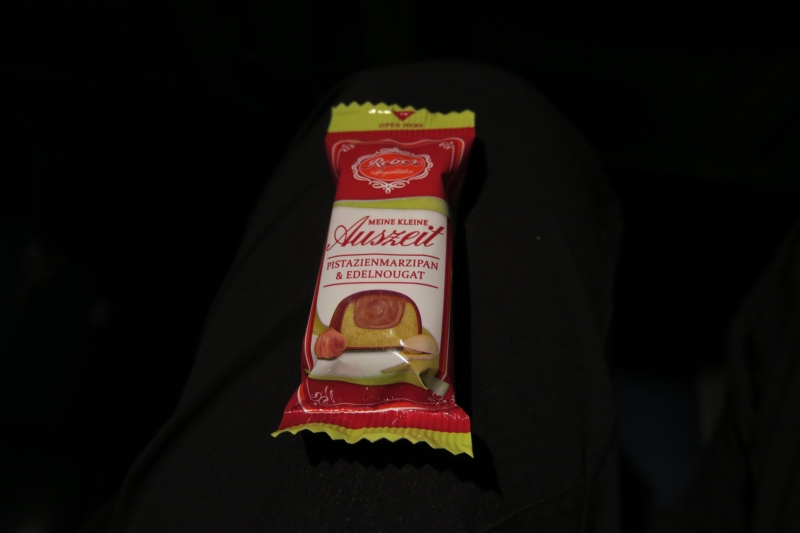 While Simon was passing by, he asked me if I blogged. I said yes, and he said that we should exchange web addresses. I went into the galley after a while, but Simon was busy, so he just gave me a slip and told me to write down my web address – so he did. He told me to wait, then gave me his web address, which seemed to be a Tumblr address.

To my surprise, his blog (or rather, his Tumblr) isn’t aviation-related at all – they’re legitimate, well-composed photos of travel and city life. Check out Simon’s Tumblr – his pictures are great.

Shortly before landing something caught my mother’s eye on the duty-free menu, and she asked the other flight attendant about it after pressing the call button. Apparently these are only offered on select flights – I believe they are only offered on flights from Frankfurt.

We were soon ready to land in Frankfurt, and I admired the scenery of Germany as we landed. It would be my first time in Germany, though I’m definitely going to be visiting the country soon – this summer, to be precise.

We touched down at Frankfurt Airport at around 19:30 and started making the haul to the A/Z gates, which are pretty far from the runway.

I admired the diversity of the traffic as we taxiied to our gate – including seeing a LATAM aircraft for the first time, and admiring the myriad of Lufthansa heavies that we taxiied past on the way to our gate. 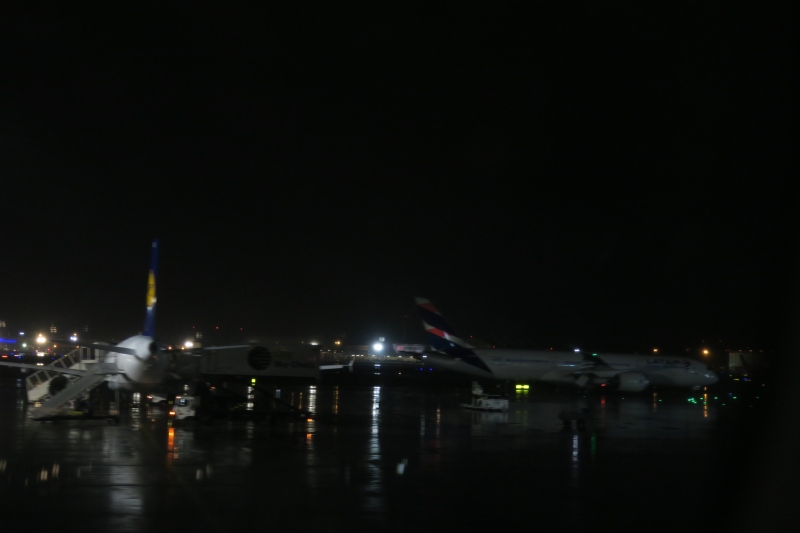 I wasn’t expecting to see such a nice airport, and it’s pretty obvious which airline is dominant here based on the huge logos plastered between the gates.

As I deplaned I bid farewell to Simon, who said “keep taking pictures, buddy”.

I was expecting transit at Frankfurt Airport to be really messy, but it was actually a pretty smooth transit. Stay tuned.

Simon was a great flight attendant throughout the hour and took good care of us, so I can’t commend the service on this flight enough. Had the service not been as good as it was, this would’ve been a pretty sad flight.