Hello from Jakarta! Today I flew Cathay Pacific’s 777-300ER economy class from Hong Kong to Jakarta. While I’ve flown their A330 economy class quite a bit, I was wondering how the 777 would compare, even if the seat’s bones are technically similar.

I really don’t want to bother with the slow (fast for Jakarta, but still slow) internet after being awake for around 19 hours, so I’ll leave a “5 pictures” post similar to what I left after flying Dragonair economy class. Unlike at some other blogs, I’ll still try to post more detailed quick recaps of a new product after a flight, so this will be the exception and not the norm. 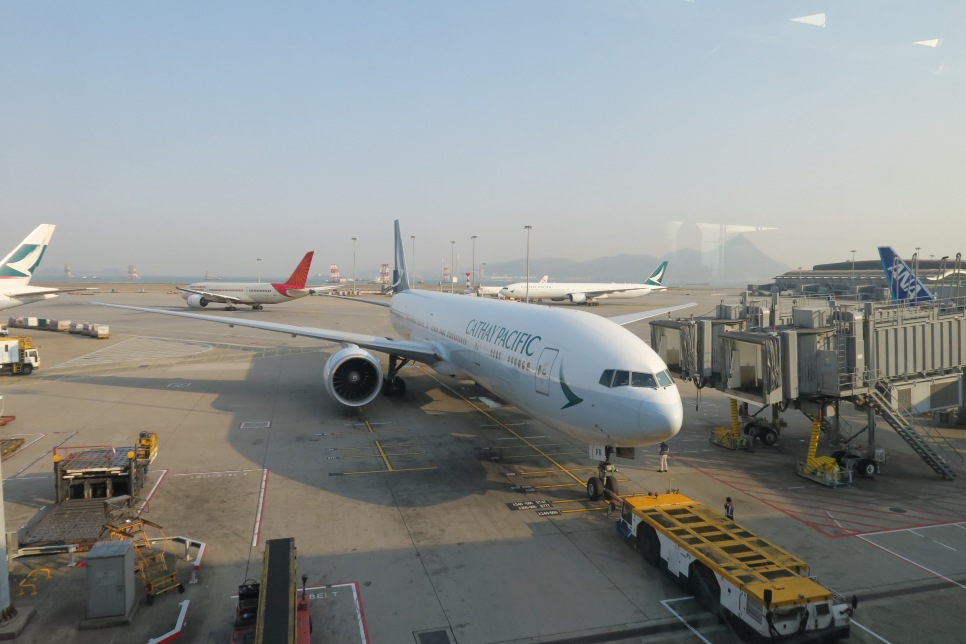 Cathay Pacific Boeing 777-300ER Hong Kong Airport (not the one we flew, but I have a better picture of it, so let’s use it)

Cathay Pacific’s 777s feature really comfortable economy seats in a 3-3-3 configuration. They’re great for lounging and napping, and go really far back when reclining, though with a “cradle” effect, so it doesn’t too badly affect the space of the person behind you.

Perhaps the most exciting thing about this flight was that premium economy now has legrests at all seats. Upon asking, I learned that this is increasingly common in Cathay Pacific premium economy cabins nowadays.

Another important thing is that the toilets are swanky. I haven’t flown a 777 in economy in bazinga-forever, so this was new to me, but the toilets by the corner have more mirrors than Jason’s posts have mistakes.

I was actually really impressed by the soft product on this flight. For one, the service was good as can be for economy class, and the purser was friendly, personal, and engaging (and very happy about my enthusiasm about flying). Also, the food was great. I had the egg fried rice – the star of the dish wasn’t the fluffy rice that they had, but the great chicken that came with it.

Cathay Pacific’s 777s have the best seats that I could ask for. They’re great for sleeping, and I could sleep comfortably even in an aisle seat. They’re excellently padded, well-designed and they’re just overall great seats to spend time in (for economy class – I’d sure prefer a premium economy or a business class seat, but I can’t name a better economy class seat).

Their service and food were also amazing on this flight as well, so for a simple four-hour flight, I can’t really ask for more. Overall, this flight was perfect, and I wouldn’t hesitate to fly with Cathay Pacific again.