I hope everyone is doing well during the pandemic! I’m sorry about the lack of posts lately – I suppose lately I’ve focused on reporting firsthand experiences and tried-and-tested comparisons, and this hasn’t boded well with the current circumstances. I’m about to fly back to London soon, though don’t know when the next time I’ll fly a plane will be – for those interested, I’ll be flying Cathay Pacific’s A350 premium economy, which I haven’t reviewed before. 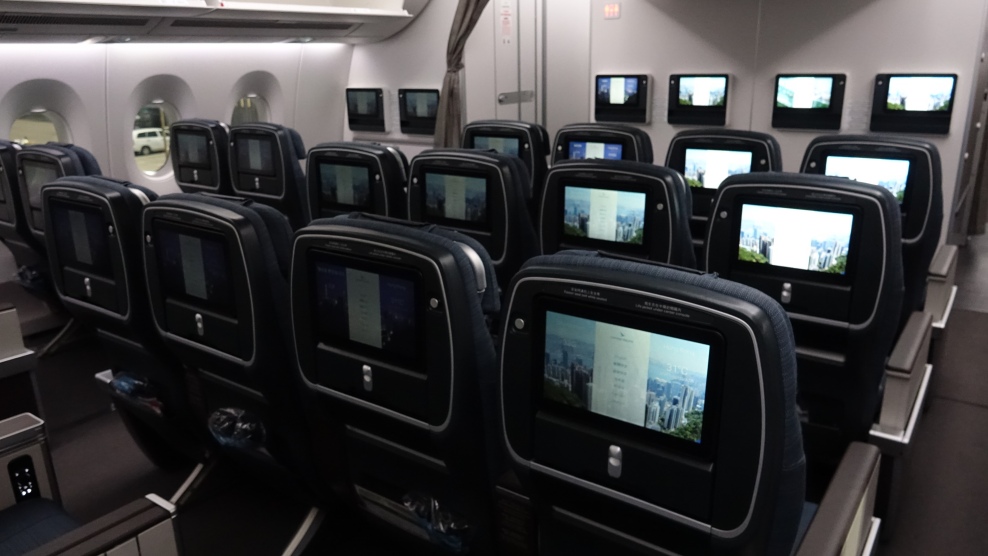 For obvious reasons, this pandemic has hit the travel industry hard. While airlines are struggling to stay alive, it’s quite hard for travel bloggers to pioneer new content, to the point where it gets quite contrived. Therefore, I’m not even going to try – instead, I decided I’d share a few reviews of phased out products. Not just seats that don’t fly anymore, but airline reviews that we can’t recreate for various reasons, whether they be novelty aircraft on novelty routes, even before the pandemic started.

I hope some of these reads will be entertaining for fellow aviation nuts.

Let’s start with an obvious one. In July 2016, Jason flew from Bangkok to Hong Kong, expecting to fly Cathay Pacific’s A350 for the very first time. At the time Cathay Pacific only had one A350, so equipment swaps were really common (I’d experienced one of these myself) – not only did he get equipment swapped to an A350, he also received an upgrade to business class, from his originally booked premium economy cabin.

Cathay Pacific quietly retired their A340 in 2017, and their hated herringbone seats left with it. 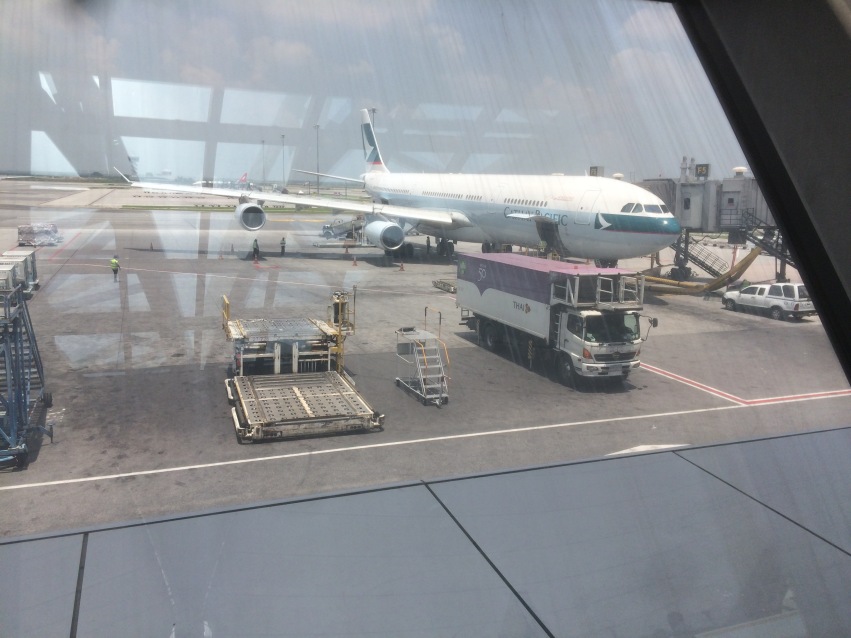 While back in the days we’d do everything in our power to select a K seat on the A330 or A340 so we’d be facing a wall instead of another passenger’s feet, those days are long gone, replaced by Cathay Pacific’s new A330/777 business class seat (and of course, now their A350 business class seat).

This isn’t a familiar sight for post-2017 frequent flyers

While I haven’t flown Cathay Pacific’s A340 upfront before (only in their hideous economy shell seats), I flew my first lie-flat seat in 2009 on the upper deck of a Cathay Pacific 747, and really enjoyed the experience. Since then, I’ve flown the seat a couple of times on the 747, before it was retired. Now that I’m bigger and more jaded, though, I’m sure I’d have second thoughts.

Korean Air’s 747-400s used to run many of their longhaul routes, though they’ve been replaced by 747-8s and 787s in the meantime. In April 2015 I was thrilled to fly the Korean Air 747 for the first time on the upper deck, and remember being enthralled by the private jet-like cabin ambience, the retro seats, and the huge side storage bins.

However, in February 2016 a scheduled Korean Air 747-8 flight I was on got swapped to a 747-400, and I wasn’t as thrilled. Like, DMed-Korean-Air’s-Hong-Kong-office-to-complain-to-the-agent version of “wasn’t as thrilled”.

James at Korean Air’s Hong Kong office was a good sport (that’s actually a huge understatement – I was young and sent rants to him over Twitter DM about my equipment swaps on OTHER airlines, and he responded like a champ), and he memorably said, “Please enjoy the classic aircraft. You’ll have so many opportunities to try new aircraft in the future. Take the chance to fly the classic aircraft before it retired.” He really was right.

I eventually got my ride on the Korean Air 747-8 anyway, in a first class seat no less, and the 747-8s have succeeded these aircraft. Korean Air still has a couple of 747-400s flying, but even pre-pandemic they no longer flew international routes, instead sticking to a domestic Seoul-Jeju commute.

Now for a more recent one. Qatar Airways used to lease six A350s from LATAM, along with LATAM’s hard product, and operated them on routes to Europe and Asia. My flights between Doha and Munich in July 2017 were swapped to these leased aircraft. The seats are far behind Qatar Airways’ reverse herringbone and QSuite hard products, though I far prefer them to Qatar Airways’ other forward-facing business class seats on their 777s.

As far as forward-facing seats go, these seats were plush and well-padded, featuring substantial privacy screens. However, the sole purpose of these aircraft were to scaffold Qatar Airways’ expanding demand for planes, which exceeded the rate at which Airbus was producing them; obviously Qatar Airways is no longer in need of extra planes, so these aircraft have all been returned to LATAM.

While these planes were initially put on all sorts of routes, they were eventually relegated to less premium markets. Most of the routes operated by these aircraft have now been either put on hold by the pandemic, run by A330s, or operated by QSuite configured aircraft.

This one’s a really old one, and could be a fun read. Obviously 12-year-old me isn’t the best judge for a cabin product, but I remember these dirty old A330s. They were never cleaned particularly well, the entertainment box jutted out into the legroom of every other seat (despite the seats only featuring audio entertainment), and the seats were cladded in confusing upholstery. Looking back the colours of the cabin were actually quite fun, but these planes definitely weren’t a joy to fly. I reviewed these seats in May 2014 from Hong Kong to Kaohsiung. While my pictures back at the time were terrible, long-time Cathay Pacific flyers must remember these thick padded recliners (I remember flying these seats between Hong Kong and Beijing in 2012, a couple of years before I started writing trip reports). Oh how times have changed…

I remember when Dragonair updated their old A320 seats with the same upholstery that Cathay Pacific’s economy class seats use – that was a fascinating transitioning moment that was part of the airline’s slow transition into what we now know as Cathay Dragon. In May 2016 Jason snagged a seat on one of these A320s to check out what was going on. While these seats were tough, any sort of power or entertainment was nonexistent, and the 29-30″ seat pitch didn’t bode well with the thick seat backs, he wasn’t too bothered on his short flight between Hong Kong and Guilin (slightly lengthened by an hourlong ground delay).

While only Jason has a written-up review of this product on the blog, I remember flying this seat pre-reupholstery on a flight between Hong Kong and Beijing. It was uncomfortable, the person behind me kept kicking my seatback up after I tried to recline, and I was an absolute brat, including trying to get the flight attendant to take a picture of the business class cabin for me. Needless to say that didn’t end well, and I’m glad I never poured my anger out on airliners.net like 12-year-old me vowed to after the flight… Much like the A330 product, the A320 product has been succeeded by a new, much more sleekly designed slimline seat with WiFi streaming available.

Breathe – Thai Airways isn’t retiring their A330 product just yet. And no, they haven’t outfitted any more of their A330s with a new business class seat.

Instead I’m talking about their route between Hong Kong and Phuket. Thai Airways used to run A330s with business class on this route. These were filled planes, though they charged super-cheap prices – we managed to snag tickets south of HK$5,000 during Chinese New Year. I flew this route in February 2015, and remember feeling a laid-back vibe on this leisure route, from the tourist-laden business class cabin to a generally relaxed service vibe. Phuket is also further from Hong Kong than Bangkok, so these were the longest flights I’ve taken on Thai Airways (I’ve never flown them longhaul). While I’ve flown Thai Airways countless times between Hong Kong and Bangkok in the meantime, the cabin atmosphere simply isn’t the same.

Cathay Pacific started flying the A350 in June 2016, and I wanted to be one of the first people to check them out. My family decided to take a short trip to Taipei, so I booked us on the A350 for both legs. While we eventually did manage to check the A350 out in business class on the return, the outbound was swapped to a 777-200. Back in the days when we all took flying for granted, getting swapped from a longhaul business class seat to a subpar regional business class seat on an hourlong flight was a big deal!

I flew Cathay Pacific’s 777-200 one more time a few months later (also between Hong Kong and Taipei for a long weekend), though I didn’t end up reviewing that flight. Cathay Pacific quietly pulled their 777-200s out of service in August 2019.

Unfortunately, once Cathay Pacific pulled these 777-200s out of service, these seats went along with them. Fortunately, their new narrower successors are also well-padded and have ample storage – I’ve flown the new seats from Tokyo to Hong Kong, and don’t hate them.

Like almost all other airlines, Cathay Pacific currently operates a stripped-back schedule as a result of the pandemic. While an A350 flight was a treat in 2016, in mid-2020 you’ll be hard-pressed to find any Cathay Pacific flight operated by another aircraft.

As part of a trip to Europe on oneworld, Jason’s flight between London and Madrid on British Airways in July 2016 was operated by a 767. British Airways has since retired all of their 767s, so his report serves as a fun read into history.

Like most European airlines, British Airways currently uses the A320 family as the backbone of their shorthaul fleet.

Here’s one I’m not quite sure about. During the pandemic Lufthansa announced the immediate retirement of 6 out of their 14 A380 aircraft, and just a few days ago they announced they’d drastically cut down their longhaul fleet. There are predictions that the other eight A380s might be slashed from Lufthansa’s fleet as well, especially since Lufthansa already has no plans on flying them until 2022.

Either way, Lufthansa pulled their A380 off the Frankfurt-Hong Kong route long ago, and the Munich-Hong Kong route has been downgraded as well since. This means that flying a Lufthansa A380 into Hong Kong won’t be a very familiar sight anymore.

This won’t be a common sight anymore

No matter whether there’s a pandemic ripping down the economy or not, the aviation industry has to stay adaptable to the travel market. As a blogger who strives to review the newest and most accessible cabin products in order to maximise how useful they are to my readers, I find it hard to treasure opportunities to review products that will be retired soon. That being said, the above reviews are all experiences that, as of August 2020, can only be experienced vicariously.

I hope you guys find some of these past reviews a fun read, and I’ll see you next week with some new content.