Skip to content
Home » Help Me Get To Italy This Summer

My parents have always wanted to go on a cruise, and we’ve decided that this summer is probably the time to finally do so. I live in London now – though as luck would have it, I need to be in Hong Kong near the end of June, whereas the cruise occurs during the second part of July. I’m finally trying Cathay Pacific’s A350 premium economy from Gatwick to Hong Kong in June 2020, which I’m really excited about – stay tuned for that. Since I’m trying British Airways’ premium economy in January, I’ll have tried all three airlines’ premium economy products that fly direct between Hong Kong and London by then, which I’ve vowed to do for the longest time.

Right, back to Italy. Now, I’ve checked award space on American AAdvantage and Cathay Pacific, and have had no luck in either direction (Etihad has award space for two, but I don’t have enough miles for four passengers, and they don’t fly from Venice). The four of us need to fly into Rome and out of Venice, and I’ve narrowed my options down to the following.

Now, since my dad is travelling, we’re trying our best to get ourselves in a premium cabin with a maximum of one connection each way. Here are the options I’ve found:

My go-to method for finding relatively cheap flight deals is to search for availability on Google Flights. Google Flights manages to accurately price a majority of airlines conveniently, and I’ve found it to be much more accurate than ITA Matrix. British Airways was by far the cheapest option that Google Flights offered.

The drawback? British Airways doesn’t exactly have the world’s best business class seat (although it isn’t that bad, apparently). On top of that, my parents and Hailey are flying British Airways in January (since it was also the cheapest option, by far, for them to get to their ski trip in Geneva). If the experience isn’t great, I reckon they’d prefer to try something new. Qatar Airways offers a really good business class soft product, and their price from Hong Kong to Italy is on the lower end of what’s available. There’s also reasonable transit times in both directions. The caveat? Ever since protests worsened in Hong Kong, Qatar Airways has been less rigorous with delivering on QSuite-equipped 777s to Hong Kong – the two daily flights between Doha and Hong Kong scored 3/7 and 4/7 last week on QSuite-equipped planes, respectively. I don’t like Qatar Airways’ old business class seats one bit, so would prefer trying something new, for now. Also, I’m not sure if HK$26,000 is worth it for Qatar Airways business class, considering they have fare promos where I can fly them for much less. I’d fly them in both directions (and even fly through Munich and cross off their A340, since they’re apparently pulling their A380 off the Munich-Hong Kong route by then), but I actually can’t get that to price on Lufthansa’s website. The only way I could get a cheap fare to price was if I flew Swiss in one direction. On one hand that’s great since I get to fly another cabin product, though I’ve already done Swiss’ 777 business class between Hong Kong and Zurich twice, and have no desire to fly them a third time (especially with how much they charge to reserve a throne seat). Still, I suppose I wouldn’t be opposed to the idea. 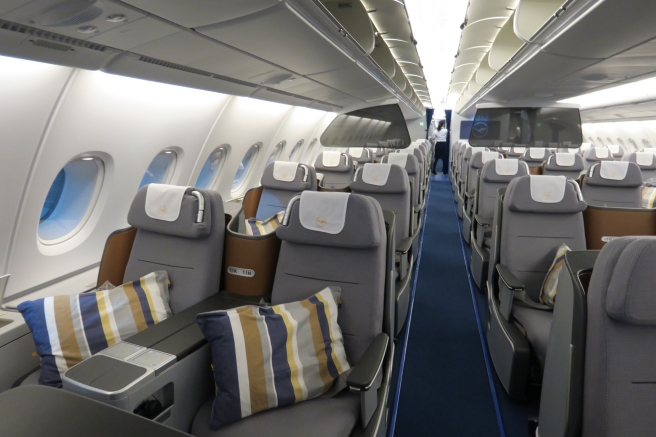 Bottom Line: Which should I pick?

Ultimately reviews are one of the reasons I try to fly as many airlines as possible. I would’ve tried to do some more exciting airlines (e.g. Turkish Airlines, Aeroflot, Finnair, etc.) but unfortunately their prices are quite high over our period of travel. That being said, if you can find any good business class prices from Hong Kong-Rome/Venice-Hong Kong over the mid-July 2020 period, I’d love to hear about them in the comments below.