I love the trend that airlines are moving towards higher-end, more space-efficient, more private business class seats. A few years ago I took my first flight in a reverse herringbone seat, and was in awe at how much space the seat provided. Nowadays, reverse herringbone seats are more or less middle-of-the-road, as more airlines have come up with superior seats. I’ve ranked all of the “original” ones here, though will need to try the QSuite (in August) as well as China Eastern and Delta’s A350s. 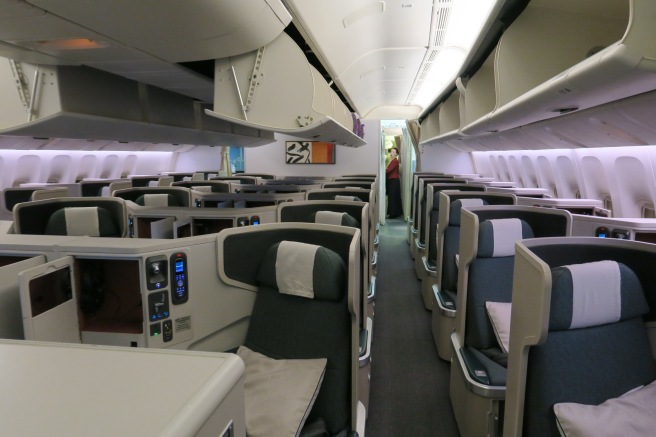 The above list is what I thought I had to try prior to today, but as of today I need to add one more to the list – British Airways’ new Club Suite.

Here’s a video of the new suite:

Here are some photos: A little context of the seat

British Airways’ new Club Suite is designed by Rockwell Collins, and is named the Waterfront seat, an evolution of the current Super Diamond seat. The seat bears many similarities to the Super Diamond seat – the biggest one being that it is laid out in the same reverse herringbone configuration – though the key difference is the addition of a door. I’ve toured the Super Diamond seat on Hong Kong Airlines, which I consider to be one of the best out there. That being said, it certainly isn’t as private as British Airways’ Club Suite, at least by the looks of it. Which routes will you get the Club Suite on?

British Airways will start by flying the A350 between London Heathrow and Madrid in August and September. Then, starting October 1, 2019, the airline will fly the seat to Toronto, and starting October 7, to Dubai.

Many of you based in London may want to check out the seat on a shorthaul flight, given the prices are more reasonable. If I were a betting man, I’d guess that this would be deployed on BA 460/461, which is currently operated by a 777. That being said, I wouldn’t snatch any non-refundable tickets yet (even though flying British Airways’ old longhaul 777 between London and Madrid still isn’t half-bad). British Airways’ A350 will be deployed on BA 107/106 on the Heathrow-Dubai route, and BA 93/92 on the Heathrow-Toronto route. It’s unclear whether the A350 will fly to Hong Kong, or if the airline will wait for the 777-9 instead (which will also feature this seat).

The plane will feature 14 rows of business class seats, for a total of 56 seats.

WOW. British Airways is currently known for having one of the crappiest business class seats out there, so to go from that to this seat is a welcome change. Regardless of whether the doors are effective or not, this will be one of the seats “up there” with Qatar Airways, Delta and China Eastern, and I think the finishes on this seat beat all of the aforementioned seats, too.

I will, however, restrain from calling this the best business class seat out there. If this seat were perfectly executed, personally I think it’d easily blow Qatar Airways’ QSuite out of the water – some seats on QSuites-configured planes are better than others, I’ve heard reports of the inferior seats being a little claustrophobic, and this seat seems to be superior on the storage front as well. In British Airways’ case, all seats will be equally spacious, since they’re based off a reverse herringbone configuration. However, I’ve heard some not-so-positive reviews about both Delta and China Eastern’s seats, as their doors have been called clunky, hard to open and close, and don’t close all the way – in other words, they’re not as well-executed as Qatar Airways’ QSuite. I’d hope that the Club Suite is on the level of the QSuite and not Delta and China Eastern’s suites.

That being said, it’s a welcome change for British Airways regardless. Something has to go horribly wrong in this seat for it to be any worse than what they used to have, and this seat will turn tables for the airline’s reputation as it replaces its old seats with these new ones in the future. I can’t wait to try this seat out, possibly between Heathrow and Madrid.

Are you looking forward to trying out the British Airways Club Suite?