Every now and then we see airlines give ambitious plans that they don’t manage to follow through with. You know Qatar Airways’ beautiful QSuite? That was supposed to be rolled out by 2015, but didn’t make an appearance until 2017 (expect a review of that mid-year, by the way). Remember Cathay Pacific’s first A350? That was supposed to come out in January 2016, but it made its inaugural flight in June.

One of the pet peeves I’ve always had when flying Cathay Pacific is the almost-universal lack of WiFi. I wrote about this at the beginning of the year, as I was irritated by the fact that none of Cathay Pacific’s longest flights featured WiFi. While this is ultimately a first-world problem, inflight WiFi makes the inflight experience much smoother for those traveling on business. 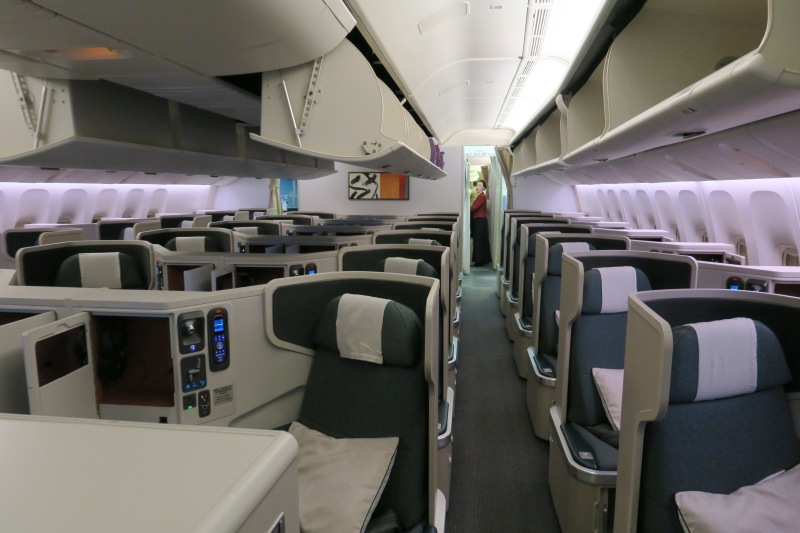 Cathay Pacific’s flights to New York are 16 hours long, and run by 777s; albeit comfortable, these planes don’t feature WiFi

Well, Cathay Pacific has made a commitment (or #CathayCommitment, as they call it) that their entire longhaul fleet will feature WiFi by the end of 2019.

#CathayCommitment: Wi-Fi services can be used on all our long-haul fleet by the end of 2019, so you can stay connected and keep in touch with others in the air. 我們將於2019年在所有的長途機隊提供WiFi服務，讓你於客機上輕鬆上網，時刻與外界保持聯繫。⠀⠀⠀⠀⠀⠀⠀⠀⠀⠀⠀⠀⠀⠀⠀⠀⠀ Credit: @t.hornsbyphotos

Okay, this isn’t so hard, as all of Cathay’s A350s already feature WiFi; but Cathay Pacific has 52 777-300ERs, many of which don’t feature WiFi yet. Cathay Pacific also has 24 A330s outfitted with their longhaul product. Are those planes going to get WiFi too? I sure hope so, given that these planes make runs to Australia and the Middle East. At least you can tweet about how narrow your seat is on the 777 – SPOILER: one of our cowriters flew this a couple of days ago, and he’s NOT happy

If Cathay Pacific has their priorities straight, they’d start from all the four-class 777s and install their way down to the A330s, though obviously I get that there are logistical challenges. Also, now that Cathay Pacific plans to install their new A350-1000 economy seat on their A330s too, are they going to be retrofitting their A330s all at once, or will they be adding bits and pieces to these planes over and over again? I know a thing or two about retrofitting planes – it’s going to be VERY challenging for them to retrofit all of their A330s with the new seat by end 2019. I know that a lot of people don’t value WiFi as much as I do, but having all my work based off the internet, this is one reason for me, personally, to choose Cathay Pacific in the future. That being said, they are doing cost cuts on other fronts, such as catering in business class – I’ll have to revisit their product someday, but at least I’ll be able to complain about it live from 40,000 feet.

I sure do hope that Cathay Pacific stays true to their word and installs WiFi on all of their 76 longhaul planes that currently don’t feature it. But I’m not so optimistic.

Are you expecting Cathay Pacific to keep up with this commitment?