This should be particularly useful for those of us in Hong Kong flying to Seoul in a Korean Air premium cabin, as I’m sure Korean Air has a “never fly the same aircraft type with the same flight number twice” policy on each of their four daily flights between these two cities. 😉

Korean Air has one of the most poorly designed airline websites I’ve had the pleasure of using. It’s easy to actually (dummy) book and access flights, though there’s a buffer time upon selecting each seat upon seat selection (you have to wait 8-10 seconds after you select each seat, so you better not misclick), you can’t “cross-reference” cabins (pull up economy and business class fares at the same time), a lot of the time you can’t check-in online because of issues with Korean Air’s website with verifying non-Korean credit cards, and mobile boarding passes rarely work during check-in.

It’s a shame, because the onboard experience is exceedingly pleasant, and in quite a few cases, competitive – especially in economy.

However, there’s one benefit to Korean Air’s website – it’s very easy to identify which product you’ll be getting (provided there isn’t an equipment swap). The issue is that no one seems to know – I’ve seen so many complaints, even from so-called “travel experts”, when flying Korean Air that they had no idea which product they were getting. I decided I’d write about that in a separate post.

So, here’s how you know which premium product you’re going to be flying on a Korean Air flight:

How to get to your seatmap

To get to the seatmap on the flight you’re on, you can pull up your booking in Manage My Booking, or alternatively you can make a booking on Korean Air’s website (which is as straightforward as booking a flight gets). From there you’ll be directed to flight selection. Now the booking system states the aircraft that your flight will be operated by, but that’s common practice for many airline sites. However, not all airlines tell you exactly which product you’ll be getting onboard.

The key is to click on the linked aircraft type next to your flight. I clicked the “A330-300” link next to the KE 602 flight on the panel above, and was linked to Korean Air’s A330 seatmap. As you see from the link below, there’s both a 272-seater A330, and a 276-seater A330 (the 272-seater features Apex Suites, whereas the 276-seater features standard fully flat seats in both first and business class). On the right is a seat guide, which even more clearly indicates the exact seat type that you’ll be seated in (this wouldn’t be needed on a 777 when you’d be able to tell if your flight had a 2-2-2 or 2-3-2 configuration, but the A330 features a 2-2-2 configuration either way, so…).

Here’s the quick scoop for passengers seated in business class: Here’s the quick scoop for passengers seated in first class: Korean Air’s Kosmo Suites product, featured on all older 777s, as well as the A380 While Korean Air offers a variety of products, it’s obvious that some are better than others. So, which ones should you try to book yourself on? If these aircraft aren’t offered on my preferred route, I also wouldn’t mind a window seat on the A380, which at least feature storage bins at all window seats.

Which aircraft to avoid?

In business class, I’d say that Korean Air’s non-Apex Suites products are all substantially inferior, though not much different. If anything I’d avoid the 291-seater 777-300ER, as the business class configurations feature middle seats, and the cabin is larger than on other aircraft, leading to a (marginally) less private experience. 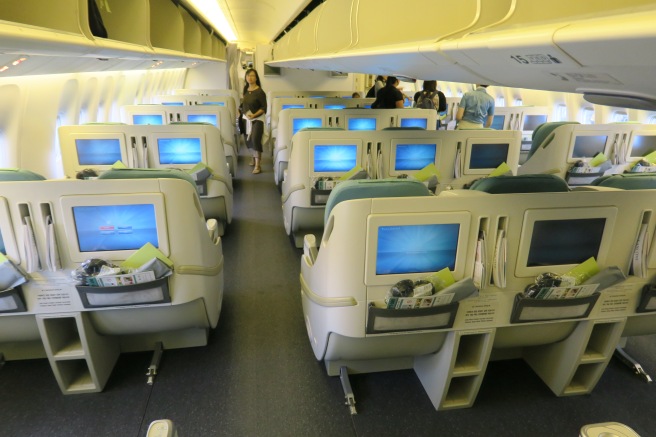 I’d also avoid flying the 747-400, which features angled lie-flat seats. However, at this point, given Korean Air only has two of them left and both are 20+ years old, flying an antiquated Korean Air 747-400 is more of a novelty experience than not (they fly exclusively regionally now, thankfully). 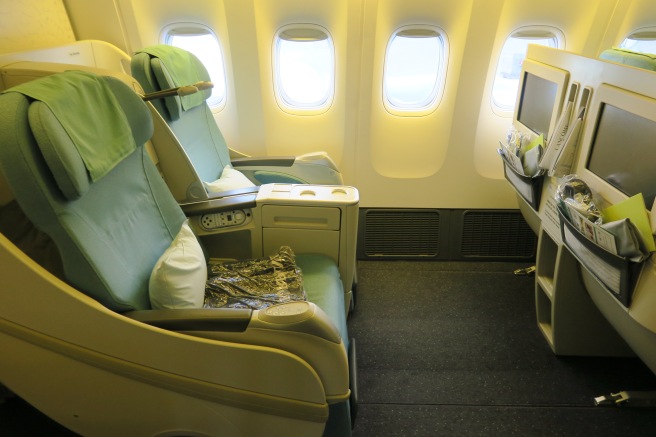 Korean Air’s Apex Suite in business class, also used for first class on their A330 and 787

Korean Air has some confusing cabin products, especially if you’re flying first class. However, it’s nice that they make it easy to identify on their website. I also appreciate that the photos aren’t PR photos, since you can see exactly how good or how bad the seat is. Hopefully this served as a decent guide to how you can tell which product your flight will feature on Korean Air, and which products you should try to book yourself on.

Did you know that you could check which product your Korean Air flight had in advance?