We arrived at the airport at around 11:30 AM for our 2 PM flight. We mainly wanted to get there so early so we could get a credit card verification issue out of the way, though I also wanted to be there ahead of time since the first class seats on the flight were first-come, first-serve. Korean Air sometimes releases their first class seats to business class seat selection on regional flights if the cabin is empty 24 hours before departure, which was the case on our flight. As I’ve detailed in a separate post, the check-in desk agents weren’t able to assign us first class seats – or so we thought.

I wasn’t able to add my SkyPass number to our reservation online, since the names were different (since the last time I’ve taken Korean Air, I’ve added my first name to my passport – if you live in Hong Kong this will probably make more sense to you). Even though Korean Air sent me a name change form I never actually got around to filling it out, so I was glad that I could do so at a dedicated counter at the airport, and didn’t even have to go back to the check-in desk to add the number to our reservation.

Afterwards I headed through security and made my way to the SkyTeam Lounge. The lounge is open to business class passengers on all SkyTeam airlines, as well as elite members of any SkyTeam loyalty programme. Elite members can even bring in a guest (business class passengers can’t). I’ve been to the lounge a couple times in the past (my last review can be found here), though I figured it was a time for us all to revisit here at YTHK, since it’s been a few years since I last reviewed it.

Before getting into the SkyTeam lounge I spotted the 777 we would’ve been on if we decided to get on the 12 PM frequency. The flight had just wrapped up boarding and was about to leave the gate. While I avoided picking this flight as I was worried about an equipment swap to a non-Apex Suites configured aircraft, this flight ended up flying out on a 777 with Apex Suites (though it was much fuller than our flight was). 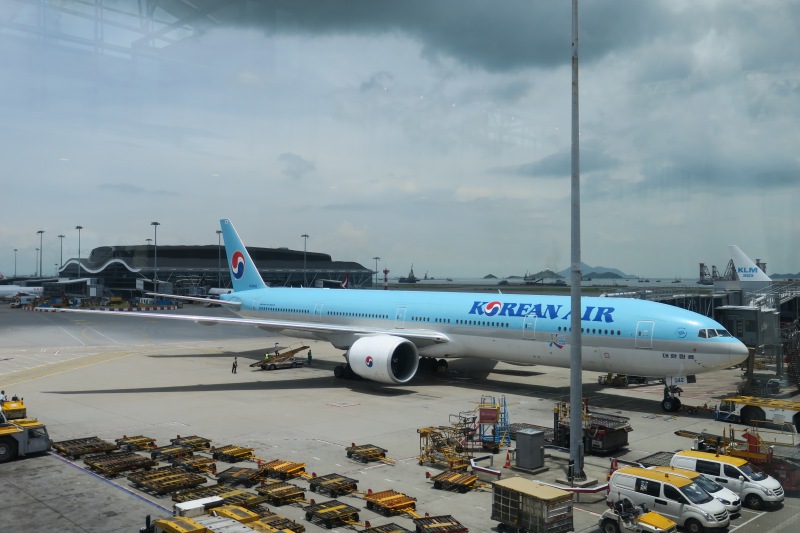 The SkyTeam lounge was one level under the entrance by gate 15. I made my way down the escalator and into the reception area, where my boarding pass was quickly scanned. (While the escalator going down was working fine, the escalator going up was under repair at the time of my visit, so anyone wanting to exit the lounge had to take a dedicated lift.)

The lounge itself was modern, having only opened a few years prior. It featured a hook/J-shaped hallway with several seating areas adjacent to it.

The first of these areas was a dining hall of sorts, which featured a food spread (more on that later), bar seating, and restaurant-style table seating. This was easily the most packed part of the lounge (and I find that to consistently be the case, actually), though I did like how it was designed. 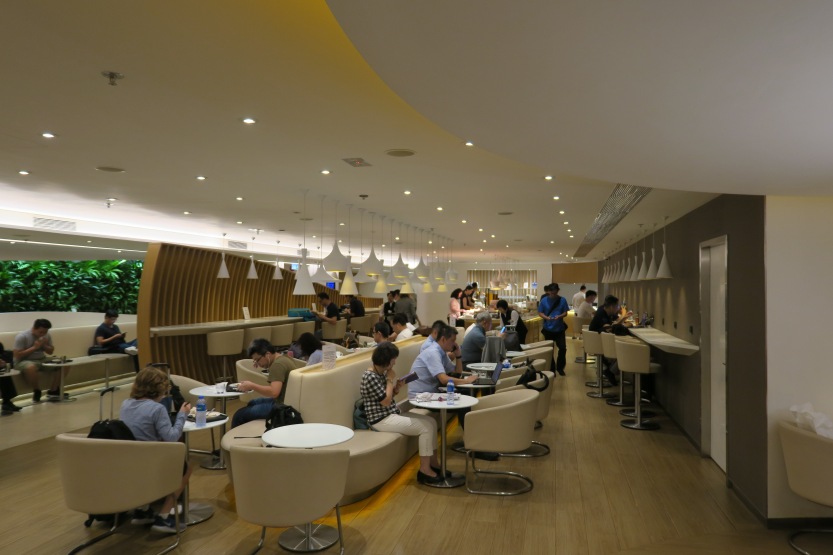 The bar seating even had power ports, which I’m sure were appreciated by those sitting there trying to work and eat simultaneously.

Behind the dining area was a carpeted relax area of sorts enclosed by a circular privacy partition. On the “outer” side of the partition was some rather arbitrary seating consisting of chairs and round tables. 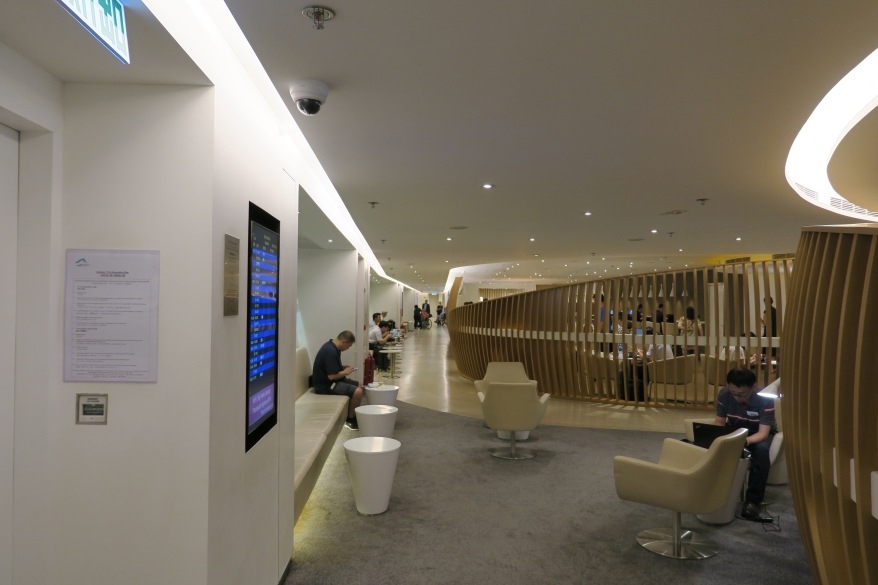 The inside of the partition featured more organised seating, with armchairs, chairs, and privacy pods. Scattered around were some white tables, all of which had power ports.

I found the area to be quite nicely furnished, and the green from the armchairs and the orange from the privacy pods gave a nice pop of colour.

The privacy pods themselves were nice, but lacked an area to place a laptop, so you’ll have to place it on your lap when working in these pods.

As aforementioned, not only did each white table feature universal power ports, but there were USB ports as well, which were appreciated.

On the other end outside the circular partition was more organised seating along the side of the lounge. There were huge windows, though unfortunately for some reason the windows were matte, so you couldn’t planespot out of it. That’s really sad as it’s a missed opportunity, though at least there was a bit of natural light.

More seating was distributed across the windows.

At the very end of the lounge were two rooms. The first room used to be a yoga room, which I didn’t think made much sense, as it was never used. Since then it’s been replaced by a (much more sensible) business center. I quite liked how partitioned the seating was, and that there was a table for those that had brought their own device. This area remained unused throughout my stay in the lounge. 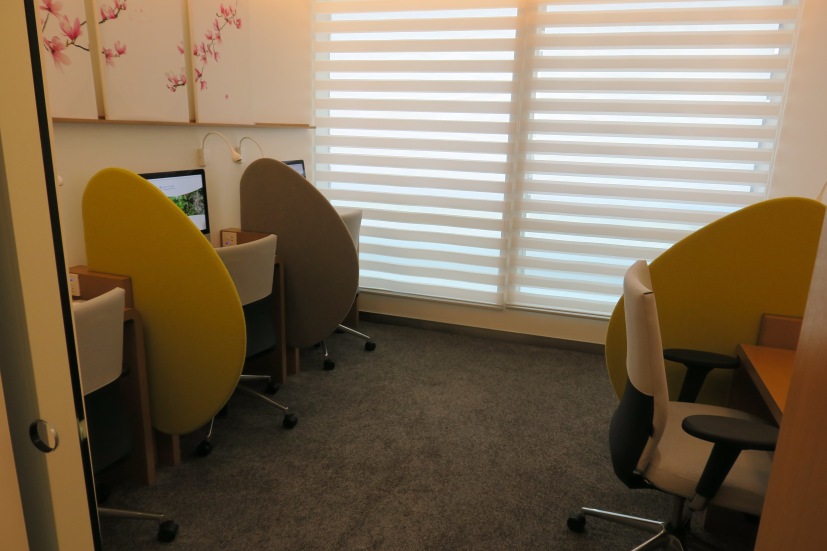 At the very end was a TV room. While our family used this room the last time we visited the lounge together, this time the room stayed empty. It featured a bench surrounding a flatscreen TV, and I thought it was a nice place for families to hang out. 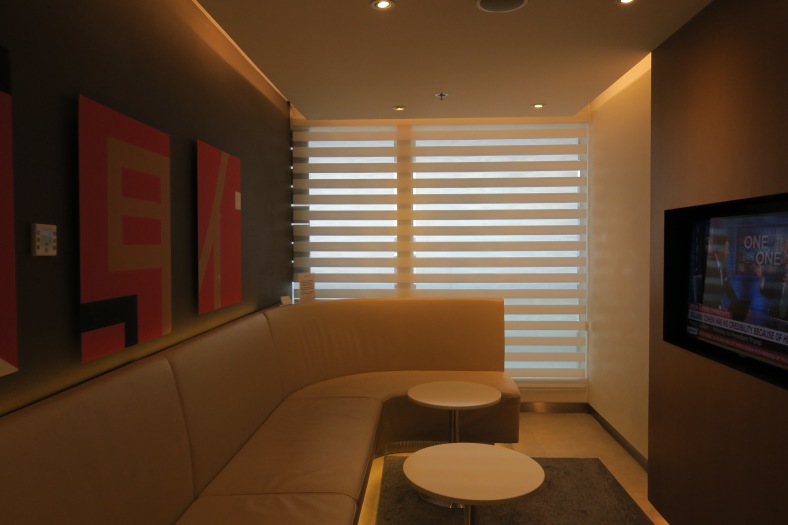 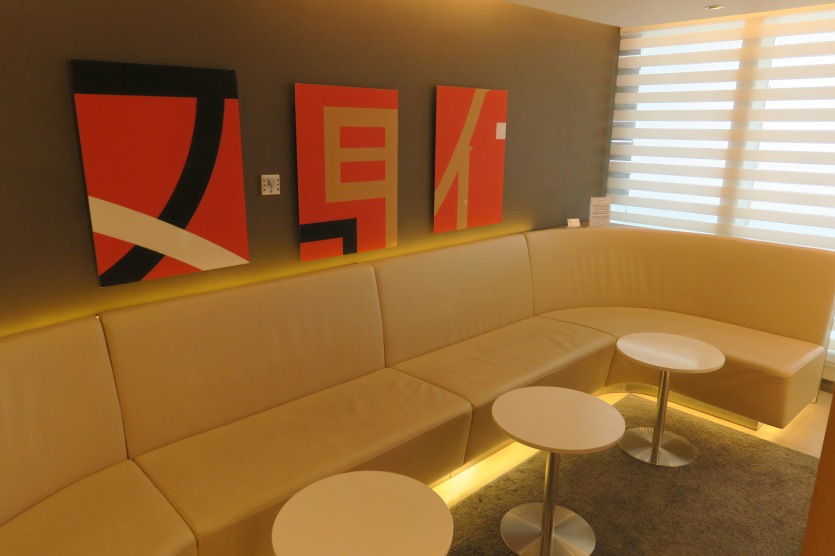 By the entrance there was also a curtained-off VIP area with armchair seating, though I didn’t see anyone seated there.

Back at the dining area, there was a food spread that featured a few cold and hot items. I didn’t eat from the buffet this time, but the food looked adequately fresh. In other words, nothing was soggy, swimming in oil, etc.. Ultimately it all comes down to taste, though nothing in particular piqued my interest. 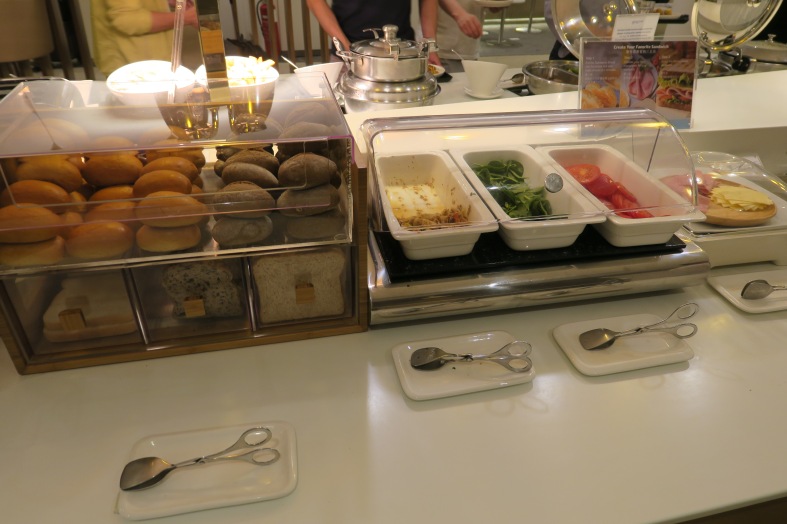 However, the buffet spread featured a noodle bar, which was rather popular with the lounge’s guests. While I wanted to save my appetite for onboard, I wanted to at least try something out, so went for the Taiwanese style beef noodles.

The beef noodles were flavourful (not very complex, but did the trick) and featured a nice kick. Meanwhile, my mother had the Hong Kong-style wonton noodles, and also found them to be good though not exceptional. 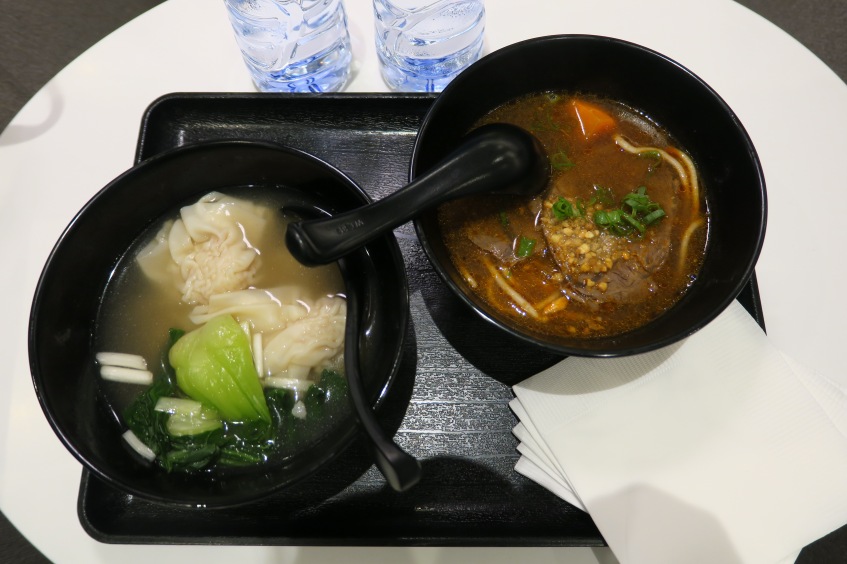 While I didn’t have a need for a shower room, I wanted to check it out. I found the shower room to be quite bland and not very classy (especially the shower curtain – a glass door would’ve been much less fiddly when preventing water from seeping out onto the bathroom floor), though it was definitely amply sized, well-ventilated, and sufficiently outfitted. I also found the water pressure from the shower to be good, though not excellent.

The bathroom featured wall-mounted toiletries from Naturals, though I didn’t try them out.

The shower attendant was very friendly, though was surprised at how quickly I used the shower room. The last time I tried to photograph the shower at the SkyTeam lounge I got told off, so this time I faked that there was a wound underneath my shorts that had to be cleaned. The reaction on her face was priceless.

Speaking of the staff, I found them to be very friendly and much less antagonising than they were since last visiting the lounge. However, as it is a shared lounge after all, they couldn’t assist in my seat selection dilemma that I explained at the beginning of the post.

WiFi at the lounge was free and usable, but not fast by any means (a quick check on speedtest.net recorded a 2.02 Mbps download speed and a 2.74 Mbps upload speed, which is fast enough for loading webpages and emails, though slow for doing anything else). I worked at the lounge until around 1:15 PM, when I made my way to gate 60 to catch my flight.

At the gate adjacent to the lounge when I exited was a beautiful Singapore Airlines A350.

From there I walked down to the APM (what the airport likes to call their train – the “automatic people mover”) and took the two-minute ride to the higher-numbered gates, and from there it was a brisk three-minute walk to gate 60. I couldn’t wait for my flight on the Korean Air 747-8, and completely wasn’t expecting what happened next!

SkyTeam’s lounge in Hong Kong certainly can’t compete with any of the world’s best business class lounges. The space is crowded, there aren’t a ton of things to do (you wouldn’t want to come early to visit this lounge), the WiFi isn’t especially fast, and the shower rooms were slightly hospital-like, despite being functional.

However, I thought this was substantial for an outstation lounge in Hong Kong. The decor was quite nice, I enjoyed the food selection (especially the noodle bar), the seating was comfortable and nicely varied, and there were enough power ports. I wouldn’t come early to visit this lounge by any means, though it’s not a bad place to spend a long layover.

Have you visited the SkyTeam Lounge Hong Kong? How was your experience?