A month ago Delta announced that they would cease flights to Hong Kong. A long time ago I remember being fascinated by their fifth-freedom flight from Hong Kong to Tokyo, which continued on to Minneapolis. It ran on a Delta 767, which featured recliner seats in business class (this ended in 2012). I was very excited when Delta announced that they’d be flying between Hong Kong and Seattle in 2014. At the time they were flying their A330, featuring reverse herringbone seats. They upgraded the flight in the meantime to a 777 (capacity wise, as the switch to herringbone seats for business class passengers was more of a downgrade from having reverse herringbone seats, in my opinion). I’ve never been to the US (cue gasps and death threats – a self-proclaimed travel blogger not having been to the US before???), though if there was a city where I’d want to start, it’d be Seattle, because of how welcoming and beautiful it seems, as well as the diverse population. However, as of last month Delta said they’d soon be ending flights between Seattle and Hong Kong as of October 4, 2018, so they’ll no longer serve Hong Kong at all.

Just a couple of days ago Cathay Pacific posted a video on Twitter teasing a new destination. They released a crossword puzzle listing nine destinations, one of which they’d be starting flights to.

Right off the bat I knew that Miami was a little too far out of reach, and Cathay Pacific wasn’t going to be flying to Salt Lake City, Austin, Denver, or Vegas. Houston seemed unlikely (only EVA Air and Air China fly there direct from Asia), and fellow oneworld partner American Airlines flies between Hong Kong and Dallas, so it wouldn’t make sense for Cathay Pacific to do so. This left Honolulu and Seattle, and it made much more sense for Cathay Pacific to start flights to Seattle (which is a growing business and tech hub, and while Honolulu has a large Asian population, travel there is dominated by Japanese carriers – there are 11 daily flights from Tokyo Narita to Honolulu alone). Yesterday Cathay Pacific revealed that from March 31, 2019, Cathay Pacific will start flying direct between Hong Kong and Seattle. Cathay Pacific has released their four-times weekly schedule – the flights will depart on Tuesdays, Thursdays, Saturdays and Sundays from Hong Kong, and the subsequent days back:

These flights will be operated by A350-900s, which feature Cathay Pacific’s latest reverse herringbone business class and premium economy products. 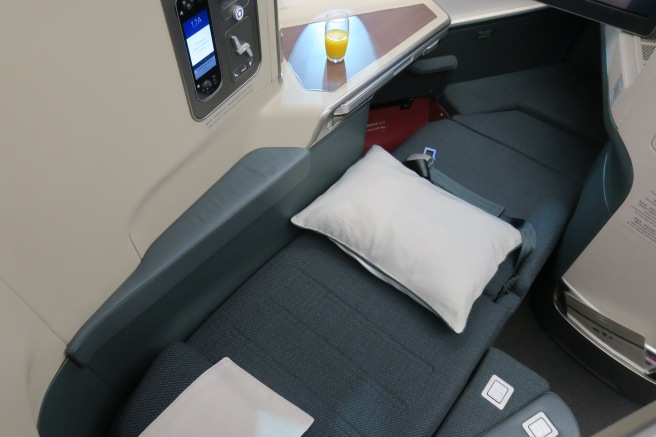 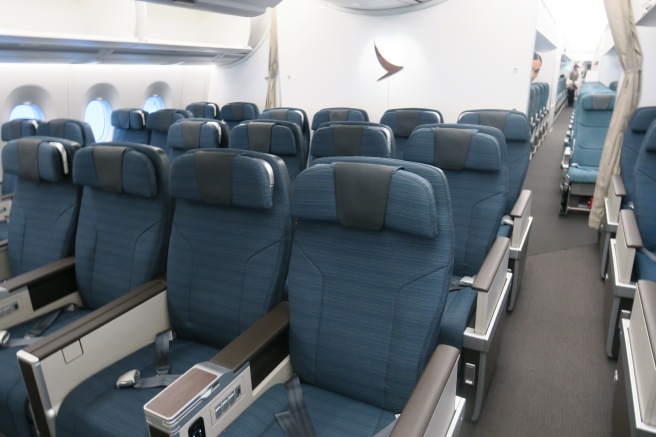 However, they feature some of Cathay Pacific’s less plush economy seats, and while I haven’t flown them, Jason’s found them to be unfortunately rather uncomfortable.

This makes the Seattle leg remarkably similar to the Newark flight, despite being four hours shorter. The flight departs later at night and arrives late in Seattle, and comes back to Hong Kong as somewhat of a “sleeper” service in the middle of the night, getting to Hong Kong just in time for the morning. Also, both are operated by A350s. On these flights, personally, I’d nap for a bit on the outbound and get up midflight to make sure I could still sleep in Seattle on my first night, and on the inbound I’d try to stay awake for a couple of hours before knocking myself out until landing.

As you’d expect pricing for business class is insane, even when routing through Taipei, where we’d normally find some cheaper deals (in this case the cheapest fare I could pull routing from Taipei was even more expensive than the fare from Hong Kong, which should give you a general idea of how expensive the fares are).

While Delta’s current service between Hong Kong and Seattle doesn’t offer premium economy, they actually seem to charge even more nowadays for their Delta One product. However, award space on BA.com actually shows pretty good award space for April, with 6 premium economy seats and 4 business class seats available for most dates from the end of April onwards (some dates in May have no award seats available, whereas some have as many as 8 business class seats available). Booking such a flight will cost 180,000 Avios and HK$520 in taxes off-peak (at least on British Airways’ website).

I’m glad that Cathay Pacific is launching flights to Seattle, as it’s probably the US city that I want to visit the most (apart from New York). It’s good to see Cathay Pacific growing their network, and I might see myself on one of these Seattle flights soon. However, I probably won’t be paying for business class with cash unless they have a significant fare sale, due to how highly the flight is currently priced. While 180,000 Avios is crazy for a roundtrip in business class for ~25 hours, there might be better deals out there that I’m just not seeing. With my current mileage situation (which isn’t great with oneworld), I’m probably best off booking a premium economy ticket on the route if I desired to fly direct, since premium economy is pretty reasonably priced.

Can you find a better deal with cash or miles on the route?

One thought on “Cathay Pacific Starts Flights To Seattle”