I’ve flown countless flights over the past few years, but this is a first for me.

I’m slated to fly Korean Air’s new 747 business class in the coming weeks. It’s not the first time I booked myself on a Korean Air 747-8, but last time our flight was swapped out for an older 747, so naturally I’ve been on my toes this time hoping that something similar doesn’t happen.

So today I found myself checking the seatmap, only to see something that I don’t think I’ve ever seen before. 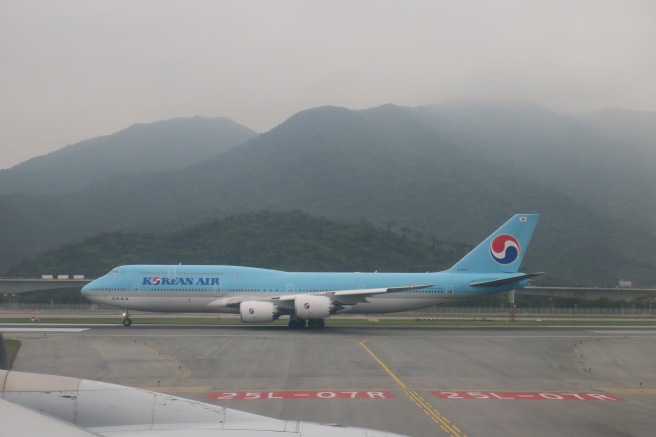 There’s a pet in the cabin on the right last window seat of the lower deck. Now, I’d normally be rather annoyed at this point, since the animal stole my seat preference, which is the right window seat in the last row. However, Korean Air’s 747 has an upper deck, which is where I’ve assigned seats on the flight, so I think the animal and I can remain friends. 😉

Much to my surprise our return flight also features a pet in the cabin, also in the right window seat in the last row of the cabin. Now, I’m very curious as to how the logistics will play out here. Will this be a guide dog (my sister’s desperately hoping that it’s a guide pug), or will it be a tiny guinea pig in a cage? More importantly, how does Korean Air have a separate symbol especially for animals in a cabin? How often does this happen on Korean Air? I’ve never seen this on any other airline before, so I’m not sure how an animal in the cabin would be represented in the seatmap.

While I’ve definitely seen animals in an airplane cabin online in the past, I’ve never seen one in person, much less in business class. Since no one’s sitting next to the pet on the outbound, I’m curious if that seat is for the animal owner and the pet, or just the pet itself (in the latter case I’d be tempted to assign Hailey there, so she can finally have as much fun as I do on a plane).

Also, I’m curious if it’s pure coincidence that the animal’s seated on the right window seat in the last row on both flights, or if Korean Air just automatically blocks out that seat for animals when necessary.

Lastly, I’m almost 100% sure that the animal will require special assistance, so it’ll be first to board, so I apologise if cabin pictures are obstructed. But I’m not going to spoil the animal’s fun, whether it’s a guide pug or a guinea pig. I can’t wait to write about this in the coming weeks.

Have you ever had an animal on your flight before? For frequent Korean Air flyers, does the animal usually turn up if it’s located on the seatmap?