I’ve been involved in a ton of premium travel lately, so it’s always somewhat of a hit when faced with a longhaul in economy. At the same time, it’s worth remembering that economy class is where a bulk of people travel, since even premium economy prices can be exorbitant at times. Today I flew from London to Hong Kong in Virgin Atlantic economy class, and assigned myself an exit row bulkhead seat for HK$870 (~US$110).

I’m always a very large advocate of customising your travels as rigorously as you can to make sure that you optimise the experience for the price you paid. This includes researching and selecting your seat, purchasing any affordable add-ons, etc.. Prior to this flight I was quite skeptical if an exit row seat was worth it (over an extra-legroom seat, which on Virgin Atlantic’s case came with priority boarding), since there was no floor storage, my seat would have a misaligned window, etc.. 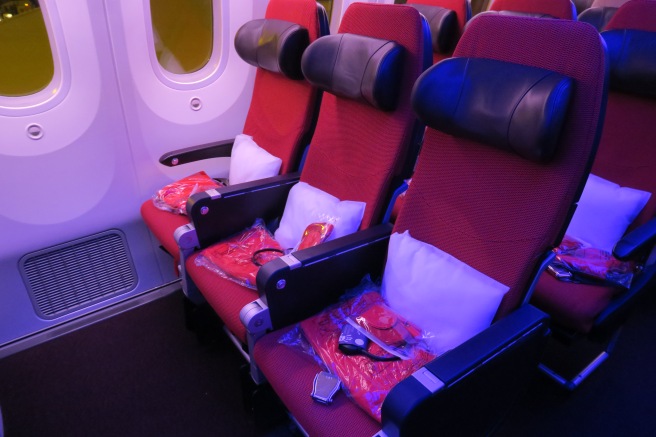 However, after spending 12 hours in an exit row economy seat, I’m convinced that HK$870 is absolutely worth spending money on, despite all the caveats. Here’s why.

The difference between an exit row bulkhead and a “normal” bulkhead

Airlines love to cram as many seats into their cabins as possible, though obviously you can’t do that around an exit row, as safety is still an airline’s first priority. So normal bulkhead seats might have an inch or two of extra space, to make sure aisle access isn’t impossible (some bulkhead seats actually have less legroom than normal seats, since you can’t put your feet under the seat in front of you). An emergency exit row bulkhead seat has a door in front, so obviously there’s heaps more legroom – more than you’d ever get in a normal premium economy, or even business class seat. Obviously that’s a great thing, though there’s one caveat – there won’t be any storage anywhere. On a normal bulkhead at least you’ll have some sort of a seat pocket to store a laptop, whereas that’s impossible in an exit row bulkhead, since a seat pocket would act as an obstruction to passengers. So without floor storage or a window, what’s so good about selecting an exit row bulkhead for an additional cost?

First of all let’s start with the obvious. There is legroom for DAYS in an exit row seat. If the space in front of you is wide enough for people to safely evacuate an aircraft, it’ll surely be more than enough for your minute legs. However, the best thing about the window seat in particular is that the door juts out into the space somewhat, it acts as a good place to rest your legs. When I slouched a bit, I was basically in a lazy-Z position. Even Virgin’s own Upper Class seats can’t do that! The other good thing about the massive amount of legroom is that you can literally walk out of your seat to get into the aisle. I had to retrieve a lot of stuff from the overhead locker, though the fact that I didn’t have to disturb my seatmates more than negated the issue of storage space, as I had unobstructed access to the overhead lockers. Even in extra legroom economy that isn’t possible, so direct aisle access for middle and window seat passengers is unique to bulkhead exit row seats (in a “normal” bulkhead there won’t be enough space in most cases).

View of the aisle from my seat

Virgin Atlantic’s entertainment system is quite pimped out, though why watch TV when you can have live entertainment? Since there’s so much room by the exit doors it tends to be a space where people congregate and burn off their DVT through exercise. On our flight one man in particular was quite feisty and gave us a nice twerk, though for some reason he refused to accept the £20 that the aisle seat passenger pulled out for him (just kidding). For anyone wondering, those in the aisle seat might find the aisle traffic disruptive, so I’d recommend the window seat above all else.

Most airlines have galleys by their exit row doors, so these bulkhead exit row seats are getting far and few. However, people get so skeptical of exit row seats because of the lack of storage space and an often misaligned window. My response to that is if you’re looking for a perfectly aligned window and need to work, especially on a daytime flight, then sure, you might be off picking another seat. However, the ability to get into a lazy-Z position and direct aisle access from an economy seat, in my opinion, is unparalleled.

Do you normally pay extra for an exit row bulkhead seat?