Our flight left Kansai Airport at 5:40 PM, so we spent the entire day near the Kansai region. We got to the airport at around 3 PM so we could deal with our car rental, and were checked in by 3:30 PM, where we were handed lounge invitations, as well as fast track cards for customs and immigration.

Hong Kong Airlines uses the Asuka Lounge at Kansai Airport, a contract lounge located near gate 5 (where our flight was departing). All of Kansai Airport’s gates require access by the Wing Shuttle, so after immigration I hopped on the train to the terminal station of the North Wing, where gates 4-11 are located.

The signage leading to the lounge is slightly misleading, since the lounge isn’t actually adjacent to gate 5. More accurately, it’s a right U-turn from the escalators down from the Wing Shuttle, around a minute-long walk from gate 5. The lounge is open to passengers flying United, Delta, Lufthansa, Sichuan Airlines, Hong Kong Airlines and Cathay Pacific.

The exterior of the lounge featured a door with frosted glass.

Then there was a rather drab entryway leading to reception, where the lounge attendant checked my boarding pass and took my lounge invitation.

The lounge itself was much larger and nicer than I expected. It was a large L-shaped room, though the seating was broken up into smaller sections with privacy partitions.

Each section featured some comfortable seating, mostly in the form of armchairs.

Some of the seating was more open, with the walls featuring rectangular, geometric patterns. 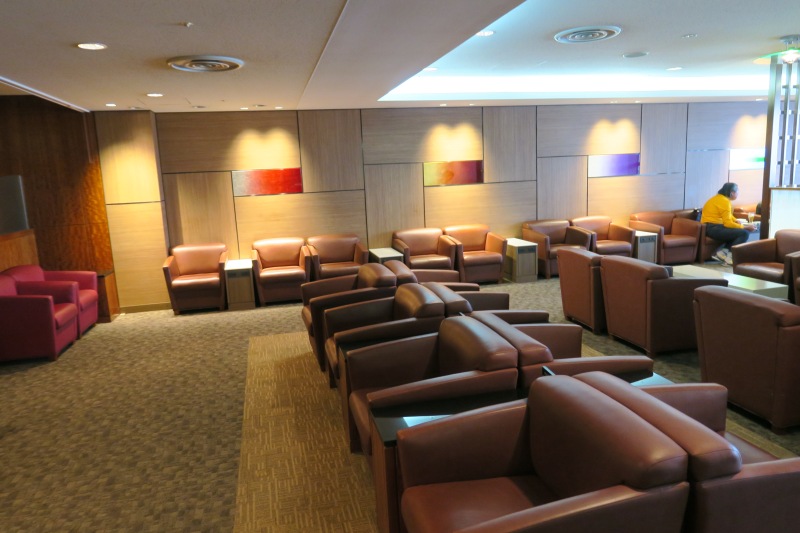 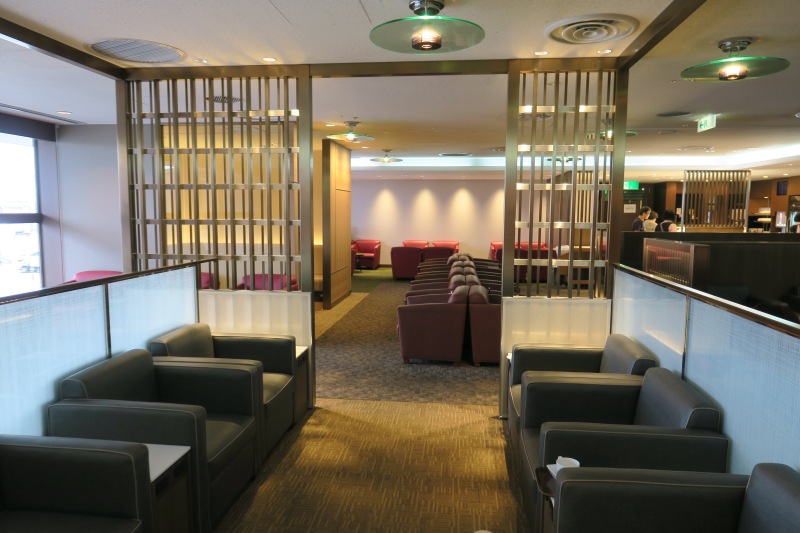 One of my criticisms of the lounge is that there weren’t many easy places to work from, as the armchairs only came with low round tables that weren’t great for working.

From some seats there was even a clear view of the Hong Kong Airlines A330 that would be taking us back to Hong Kong. 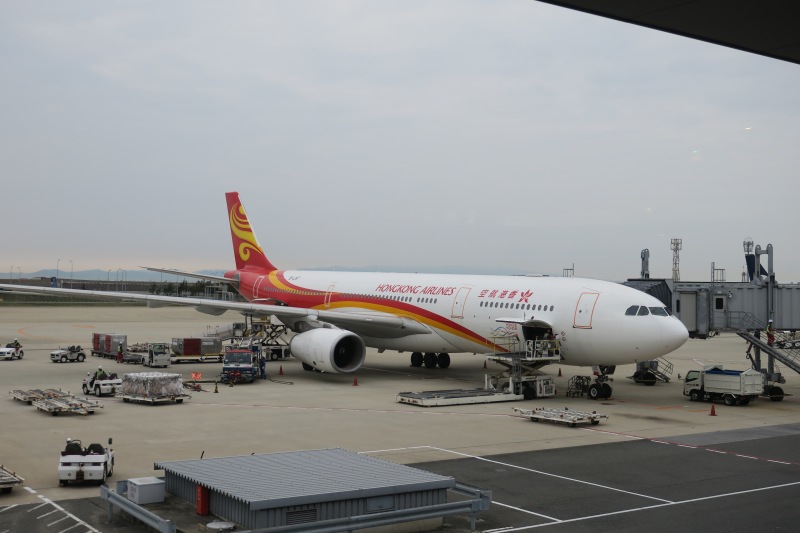 My favourite section was a privately partitioned area that my family promptly took up. You’d expect it to be some sort of a VIP section, though it wasn’t. It didn’t feature any tarmac views, though it felt private, and the seating was comfortable (although I really would’ve appreciated a better table setup). 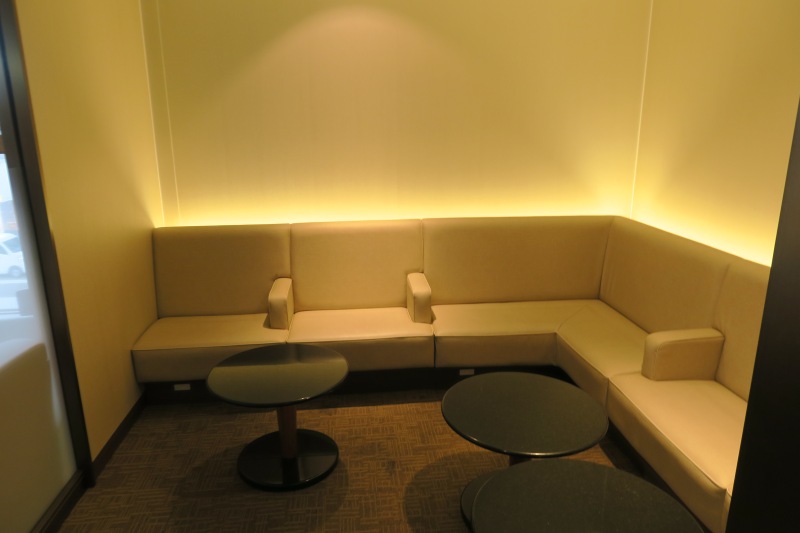 Near the back of the lounge was a nook with communal seating for larger parties, as well as bar seating, which would be best suited as a workspace.

The seats by the high table weren’t padded, though they were comfortable enough for working, and the table was an adequate height. This was also where the lounge’s (rather fast) WiFi credentials were located.

The lounge featured a rather extensive food spread for a contract lounge, including noodles, cold cuts, and juice. 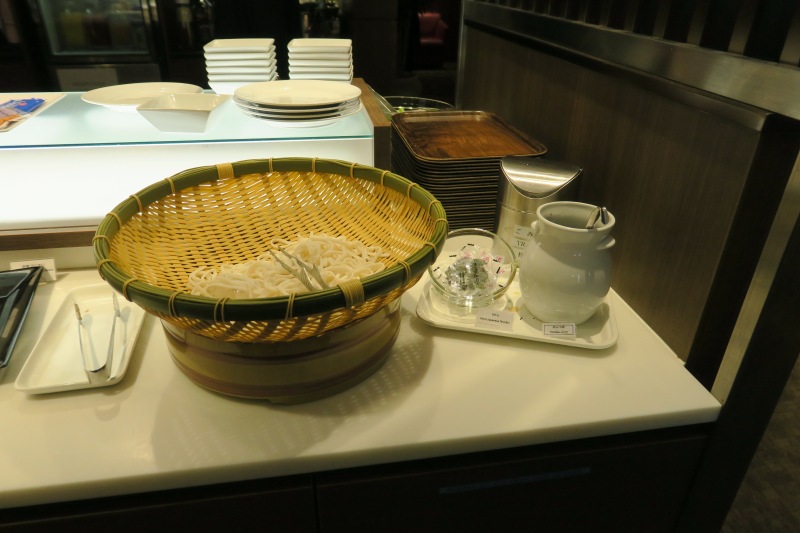 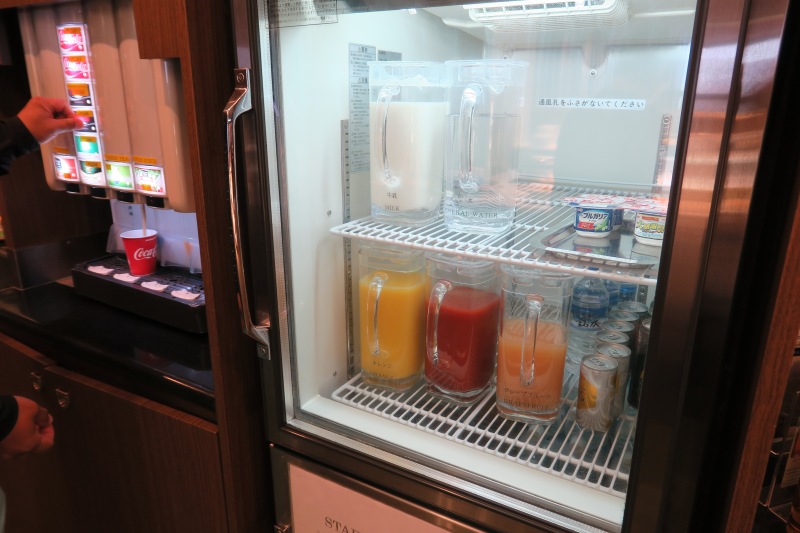 There was a Japanese-style coffee machine, though I never used it. 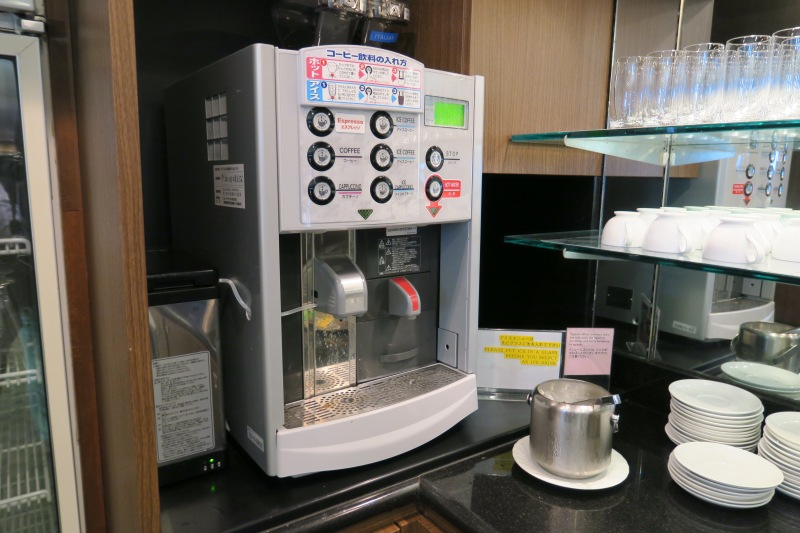 The lounge featured its own bathrooms, though more than anything I was amused by how there were separate bins for used diapers. Looks like Osaka’s quite a family-friendly airport as far as premium travel goes!

I sat down in the partitioned area and soon was joined by my family, where I worked for a while. Boarding calls were announced for our flight in the lounge, so I dashed over to gate 5 so I could be one of the first onboard. It’s worth noting that the boarding call was done 10 minutes before the scheduled boarding time, so those wanting to get their own cabin photos should get to the gate early.

On the way I spotted one of Thai Airways’ gorgeous A380s – it’s awesome how they operate these birds to Osaka, and really speaks for how diverse the market is (the other aircraft Thai operates to Osaka on a regular basis is an A350, so Osaka really seems to be a core destination for Thai Airways).

The Asuka Lounge at Osaka Kansai really impressed me. While the food isn’t anything special, I liked how spacious the lounge was, and it wasn’t crowded, despite the fact that a lot of other airlines use it. It’s a comfortable place to work and WiFi is fast, free and easy to access. The decor was also nice and had a sense of place – it’s definitely one of the better contract lounges I’ve been to anywhere around the world.

This is a mile ahead of the other contract lounge at Osaka Kansai that I’ve visited, Lounge Pacific, which features much drabber decor, a much worse food selection, and is much smaller.

That said, if I was flying Cathay Pacific, I’d probably elect to use the Japan Airlines Sakura Lounge, as it’s bigger, has a larger variety of seating, and features a better food selection.

Have you visited the Asuka Lounge at Kansai Airport? How was your experience?