This was a fun and easy trip to book, given that our choices were, for the most part, very easy (Osaka during Easter isn’t cheap at all, so in many cases there was a single option that was most feasible at its price point).

Knowing my parents’ desire to fly direct and their hesitance to fly airlines based in LEDCs (they were barely comfortable with Qatar Airways, let alone Air India), I knew that it was finally time to try Hong Kong Airlines. While Hong Kong Airlines is virtually unredeemable on miles and points, they consistently offer pretty cheap fares, especially off-peak. 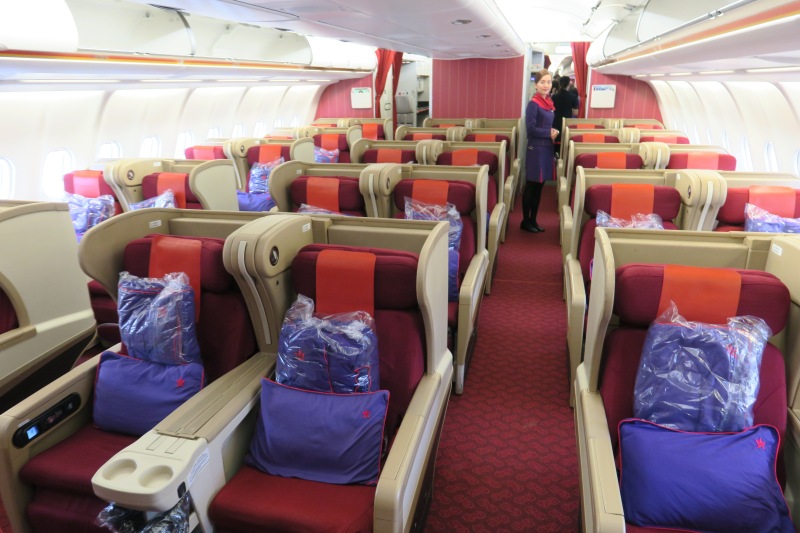 My business class ticket cost HK$7,800, including taxes and fees. Unfortunately there was only one ticket left at the cheapest fare bucket, so ticket prices for our entire family averaged at HK$8,600/person, which wasn’t the greatest of values – especially considering we weren’t getting any miles out of the flight. Then again, given how expensive everything was at the time, I was happy with the value we got out of our tickets.

Our final itinerary was as follows:

While we were booked on the regional business class seat both ways, a week before departure we had an equipment swap to a longhaul configured A330 on the outbound, so I got to sample and review both products.

Osaka features a few really aspirational hotels, including the InterContinental and the St. Regis. I reviewed the phenomenal InterContinental Osaka two years ago, and the St. Regis looks incredibly nice as well. Unfortunately neither hotel was offering rooms at a price point that we were willing to pay for, so we had to look at some other options.

One hotel that really intrigued me was the Hilton Osaka – the rooms looked modern and I liked the decor, as the hotel was recently renovated in 2013. We had the choice of booking two standard rooms or an Executive Suite for ~HK$5,800/night, and went with the latter, as it was cheaper than paying for two standard rooms at a majority of our options.

Meanwhile my dad did a few searches on Booking.com, and pulled up a rather nice-looking ryokan on Awaji Island by the city of Sumoto. It was a seaside resort named Yumesenkei Amahara, which seemed very highly regarded. The nightly rate for our Wa-Yo room (Japanese-European/fusion room) went in at ~HK$7,000/night, which isn’t cheap at all, but given that it was all-inclusive and we were only staying for two nights, my parents decided that this ryokan was worth the price.

While this trip was comparatively simple (in relation to the insane summer trips that I’ve had over the past two years), I got to try two new cabin products that I’ve been dying to try for a long time, I got to visit a couple of exciting new lounges, and I stayed in two great aspirational hotels that I’ll be extensively reviewing. I can’t wait for this trip report, and I genuinely hope you guys find this useful.

Once again, I’m incredibly fortunate to be having trips like these at my age, and I’m looking forward to the day where I can take my parents on a trip like this (probably not in Hong Kong Airlines business class, though).

Which trip report installment are you looking forward to most?