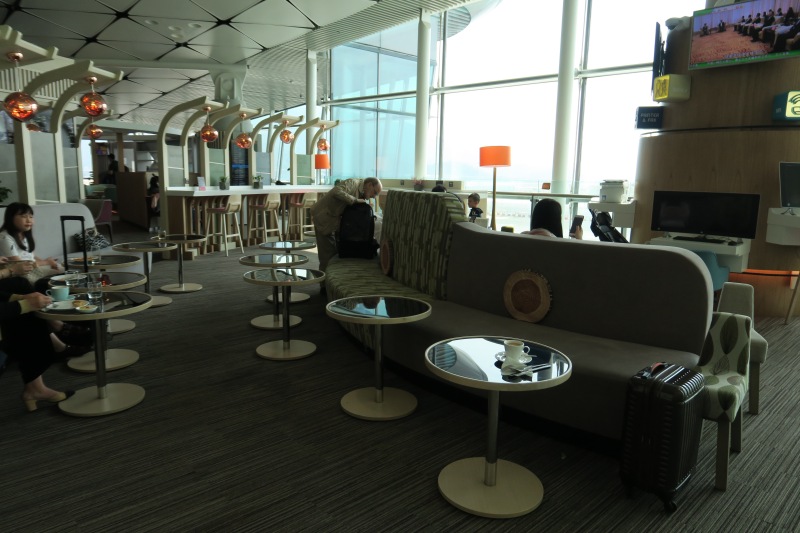 While I’ll have a full review of both lounges, I wanted to quickly cover the Hong Kong Airlines ground experience in a few pictures.

Prior to the opening of the Midfield Terminal, Hong Kong Airlines operated their Club Bauhinia Lounge, located by gate 25 in the main terminal. I knew that the Club Bauhinia Lounge wouldn’t measure up to any of Cathay Pacific’s lounges, but based on a few reviews that I’d read in the meantime, I believed that there would be some redeeming qualities of the lounge.

Yeah, that was wishful thinking. The lounge was pretty bad. 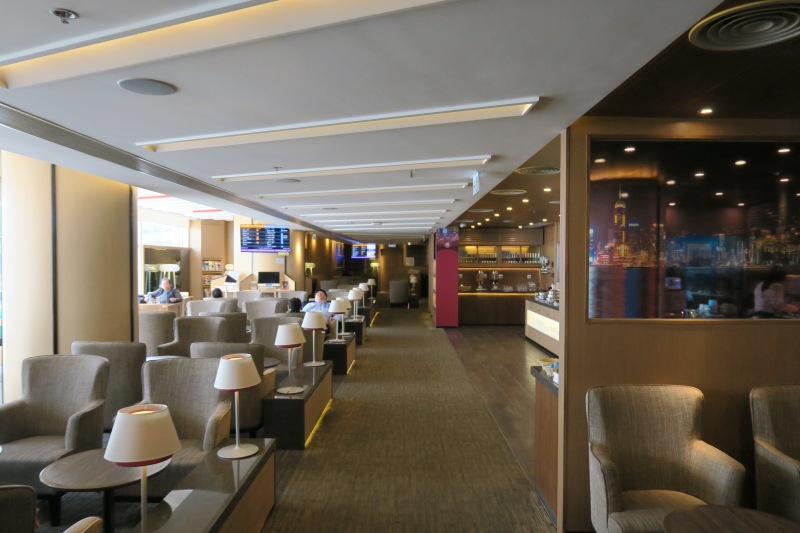 It was basically a single long room with a few types of seating to choose from. The lounge featured a small made-to-order menu, which I appreciated, and there were workspaces as well as a relax area with four daybeds. 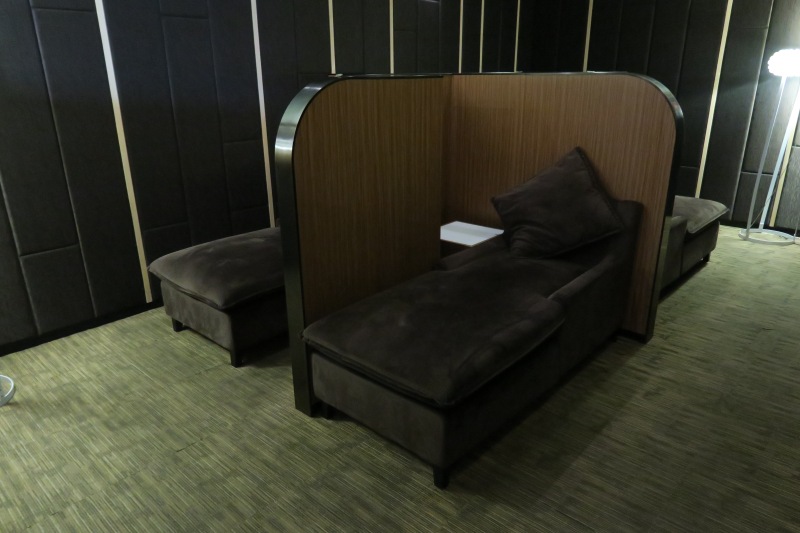 Hong Kong Airlines’ Club Autus lounge was slated to be open in 2016, though they had a few issues with that, including a fire that happened during construction causing the entire midfield terminal to have to be evacuated. The lounge officially opened in September 2017, and became Hong Kong Airlines’ flagship lounge, as well as the go-to lounge for non-alliance airlines that operate out of the midfield concourse (Virgin Australia and Royal Brunei come to mind).

Let’s start with the obvious – the Club Autus lounge is exponentially better than the Club Bauhinia lounge.

The lounge featured much more seating, which was able to accommodate all of Hong Kong Airlines’ flights with room to spare. The seating was also nicer, and there was a larger variety. 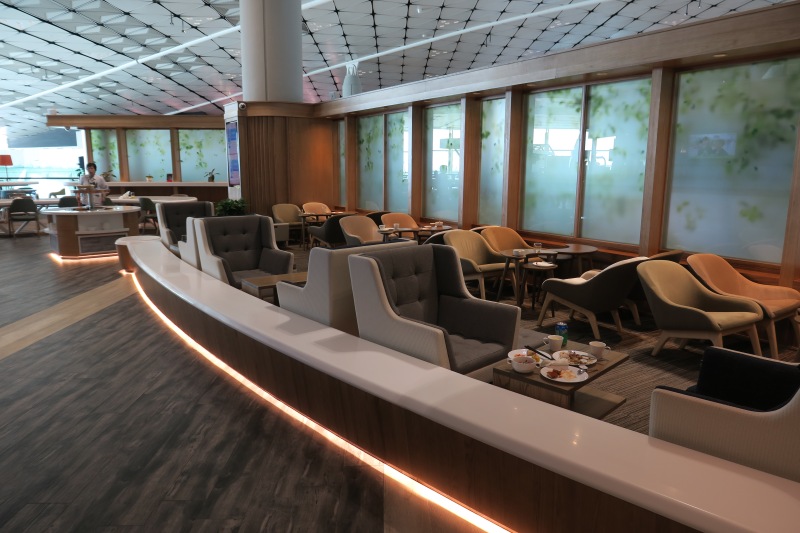 The decor may be cheap/tacky, but I liked the variety of colours, and the seats were comfortable. 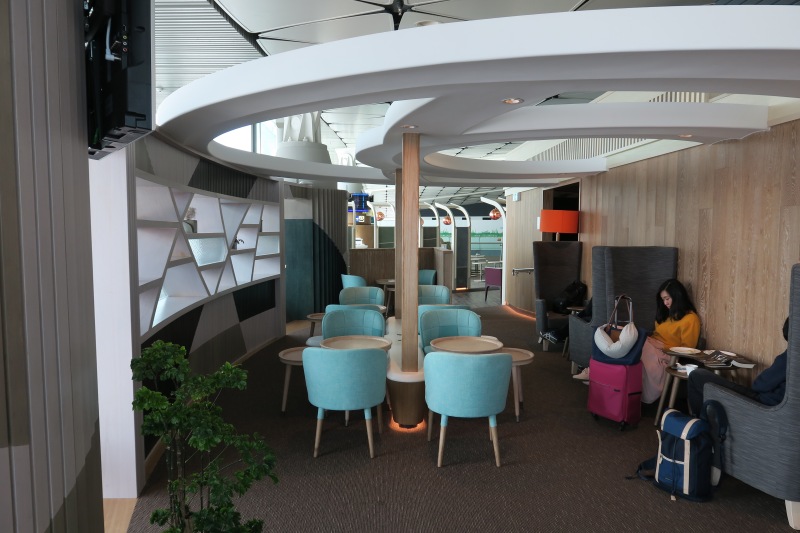 The lounge features a spread and a made-to-order menu, though it also features a bar, whereas the Club Bauhinia lounge (surprise) doesn’t. While my Autus Delight wasn’t the best drink I’ve ever had, there were a couple other choices to choose from, as well as an Easter special (though the attendants need to stop asking me if I’d like to have alcohol with my drink). 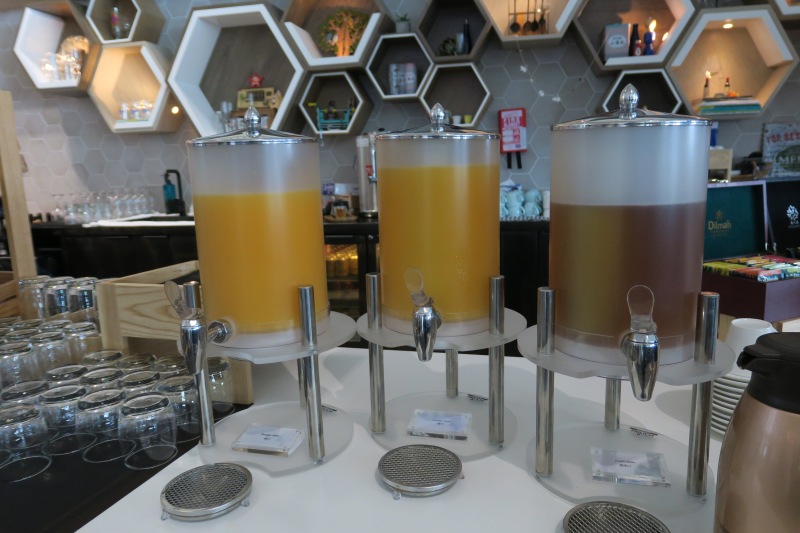 Both lounges featured shower rooms, though at Club Autus there was a short wait. I was given a buzzer, which buzzed around ten minutes after I’d asked for the shower. I found it interesting that the shower room was wet when I entered. I trust that the cleaners were doing their job, but normally shower rooms in airport lounges are pristinely dry when I enter regardless of how busy the wait is. That said, everything seemed perfectly clean, and the towels were replaced – and I liked the faux wood design and the adequate water pressure. 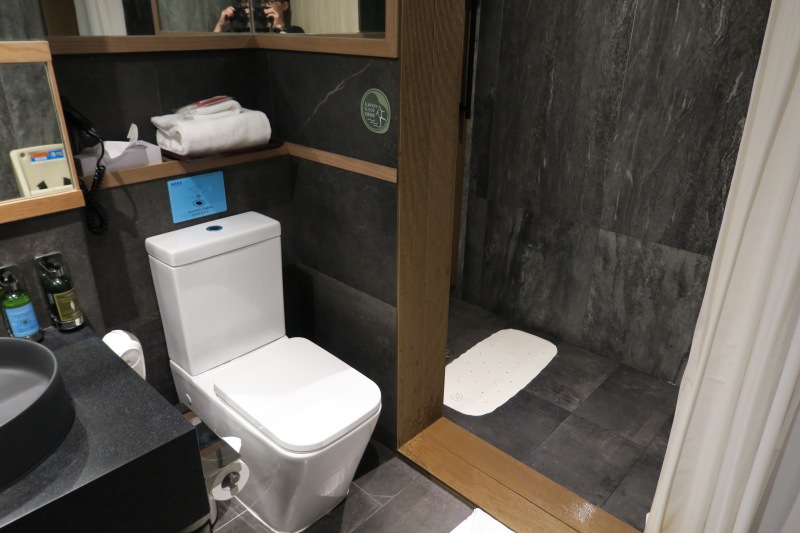 Also, people were friendly in both lounges. At Club Autus they went through the motions, and most of the staff smiled upon eye contact and interactions. At Club Bauhinia, the staff were honoured that the lounge was finally getting some attention (they were amazingly nice people, so this is a jab at how sad the lounge is, and not at the poor staff who have to man it all day).

After my full reviews I’ll start considering a post ranking some of my favourite business class hub lounges across the world, and I believe Club Autus is up on the list. No, it’s nowhere near the level of Virgin Atlantic’s Heathrow Clubhouse, Cathay Pacific’s The Pier or Swiss’ Terminal E lounge in Zurich, but it featured most of the top 10 things I look for in an airline lounge. I’d rank it as level with Qatar Airways’ Al Mourjan Lounge in Doha (I’ll have much detailed explanations when I write the post).

Regardless of whether you like Club Autus or not, one thing’s for sure – the Club Bauhinia is a sad, sad lounge.