The journey began during check-in at Hong Kong Airport, where I met up with the group that I’d be building with once we got to our destination in Pinamalayan, the Philippines. We checked in for our Cebu Pacific flight at 6 AM, and went through immigration promptly, as the queue was virtually inexistent.

Cebu Pacific operates from the Midfield terminal. After stopping by the gate 40 “East To West Food Market” for some breakfast and pictures, my friend Fernando and I headed towards the brand new Midfield Terminal, where our flight would be departing.

While we (quite obviously) didn’t have access to Hong Kong Airlines’ brand new Club Autus lounge (which I’ll be reviewing by the end of March next year), we were able to go up to the level the lounge was located so I could grab some pictures of the stunning Midfield Terminal. 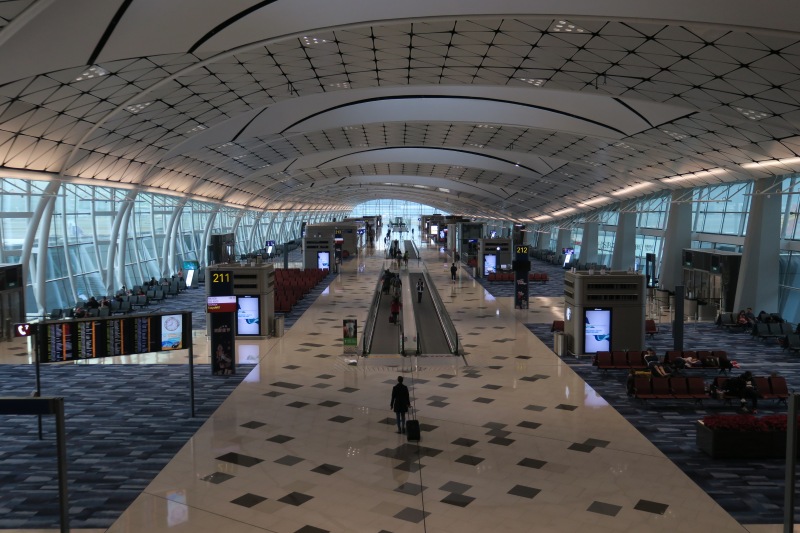 From the observation deck we had a clear view of our plane to Manila, thought that was about it.

Back in the terminal I was able to spot some interesting traffic, such as one of Hong Kong Airlines’ beautiful A350s, which I hope to try one day (Fernando tried to act as interested as I was, and for the most part, failed).

I also saw a pretty neat Malaysia Airlines 737 in its retro livery.

Soon boarding was called, though unfortunately, as is the norm for me when travelling with school, we boarded last. Thankfully we were all seated in a cluster near the back of the plane, so I could get decent photos there by being the first from our group to board.

We had nice views of our A320 as we approached our plane. 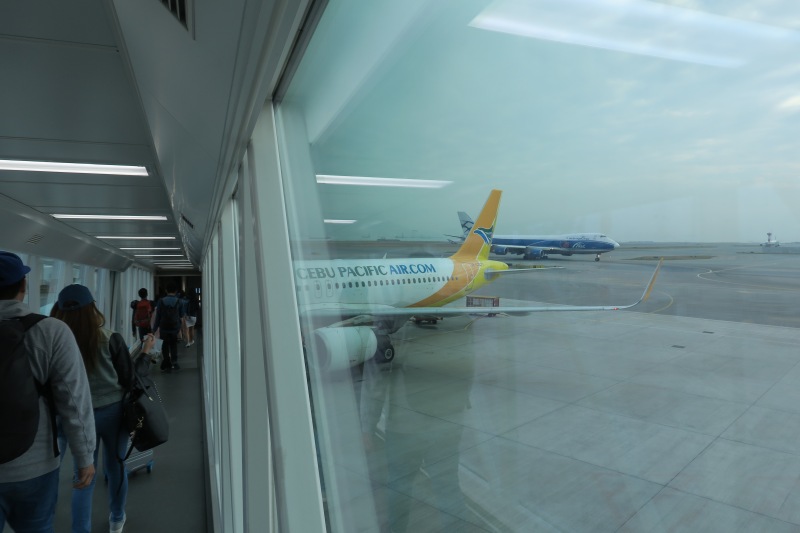 Cebu Pacific’s A320 isn’t famously dense, though it’s still chock-full of seats, featuring 179 seats in a 3-3 configuration. These seats were as no-frills as economy class seats get – they featured recline, though no power, no PTVs, no audio ports, etc..

While we weren’t first to board, half the plane was still empty, including the first row, which seemed to afford quite substantial legroom.

While the cabin is spruced up by the advertisements by the side, the colour palette is otherwise rather dull, with blue and green tones (and no headrest covers, which you’d otherwise expect on a plane). 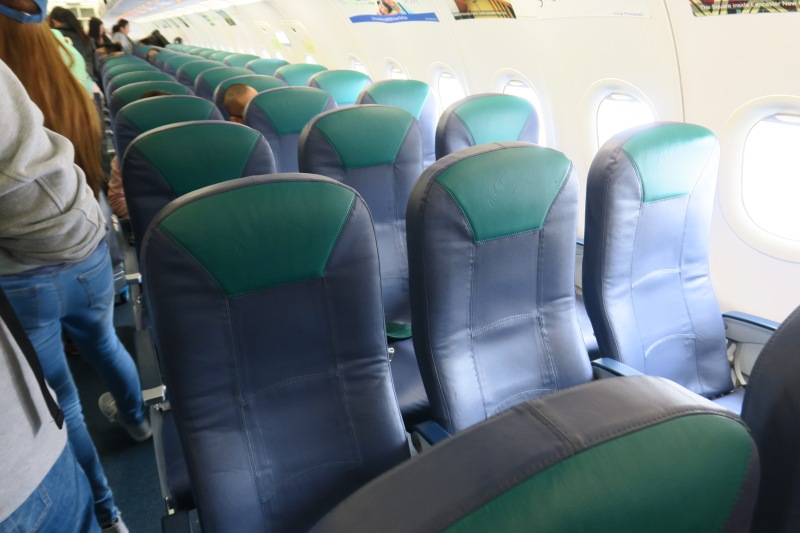 There are a lot of seats on Cebu Pacific’s A320 – it probably doesn’t help that there are no partitions at all within the single big cabin, but we were seated at the back anyway so I could observe the service flow pretty easily. 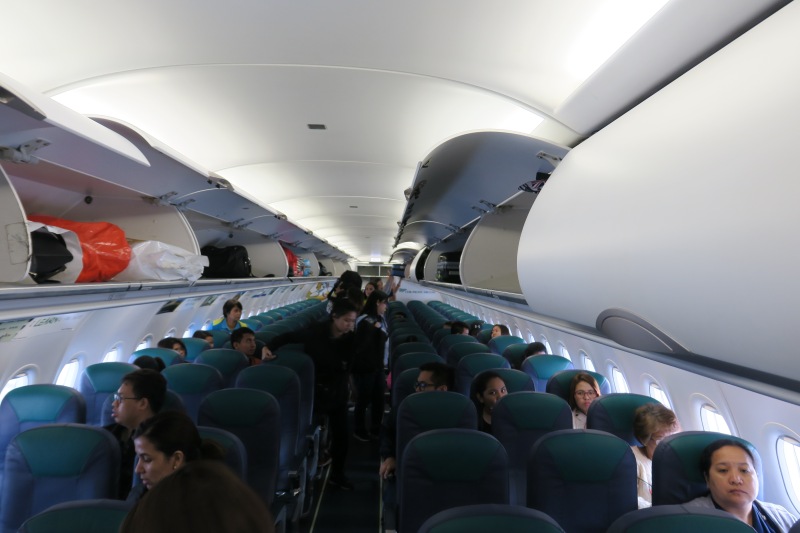 We were seated at the very back of the plane, which is my preference anyway. I was given aisle seat 30C, which was located in the second last row on the left side of the plane. While I did say that I preferred window seats, in a 3-3 configuration with 29-inch pitch, I’d go for an aisle seat any day, as I move around the cabin quite a bit. However, that’s less important when the middle seat ends up free, which was the case for me on our flight. Seated in 30A was my friend Matthew, who I last sat next to on a rather problematic flight from Hong Kong to Beijing on Cathay Dragon.

I always like a cabin view from the back, though it’s worth noting that the boarding process was rather chaotic, as people stood right in the middle of the aisle to load their luggage in the overhead bins, without giving way to people that wanted to get to their seats a few rows behind.

There were advertisements plastered along the fuselage walls, though all the advertisements were part of one big cohesive PSA. Advertising in cabin fuselages is a little cheap, though I appreciate when charitable initiatives are advertised. I recall that UNICEF put the below advertisements up (the other stickers were different but also focused on a building initiative that benefited children), but I’m not so sure. What I did like was that these advertisements provided a splash of colour to an otherwise dull cabin, in a way that wasn’t particularly annoying.

Legroom is at a measly 29″, so when your tray table’s out you better hope the person in front doesn’t recline. Since the seat next to me was empty I had no issues using my laptop, though if you were using your laptop in a middle seat in this configuration, you’d feel slightly cramped. 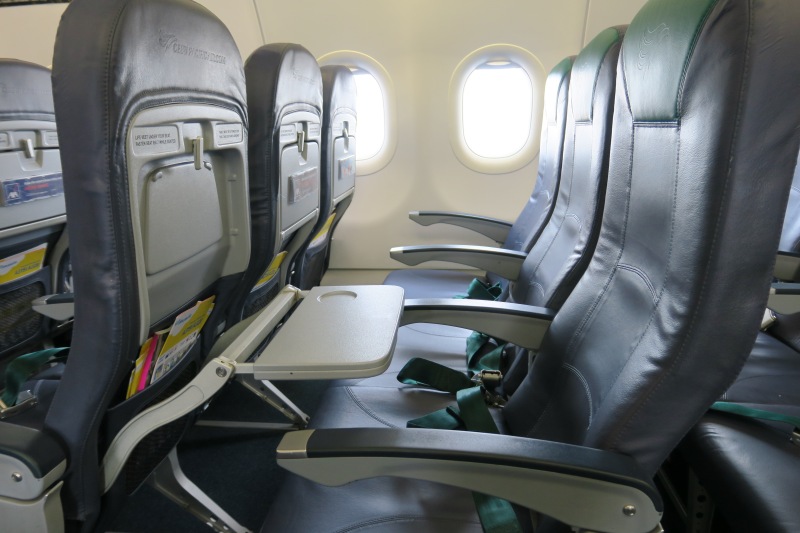 I guess that this means the limited recline these seats offer is more of a blessing than a curse. A couple from our group took the empty row behind us, though they only took the window and middle seat (and promptly fell asleep after takeoff), so I was able to recline on this flight without worrying about invading anyone’s personal space.

Albeit the limited seat pitch, the seats are slimline, so I didn’t find the legroom to be any worse than on, say, China Southern’s A320.

Apart from the seat pocket, the seats also featured the Cebu Pacific website engrained into the leather padding, though that was about it in terms of the seat’s features. 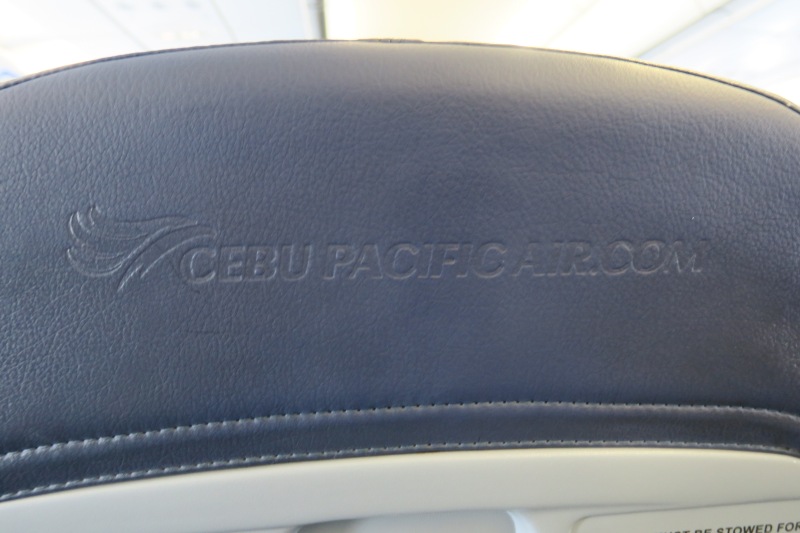 Located on the back of the tray table of every seat was an advertisement from AXA, a French insurance agency. 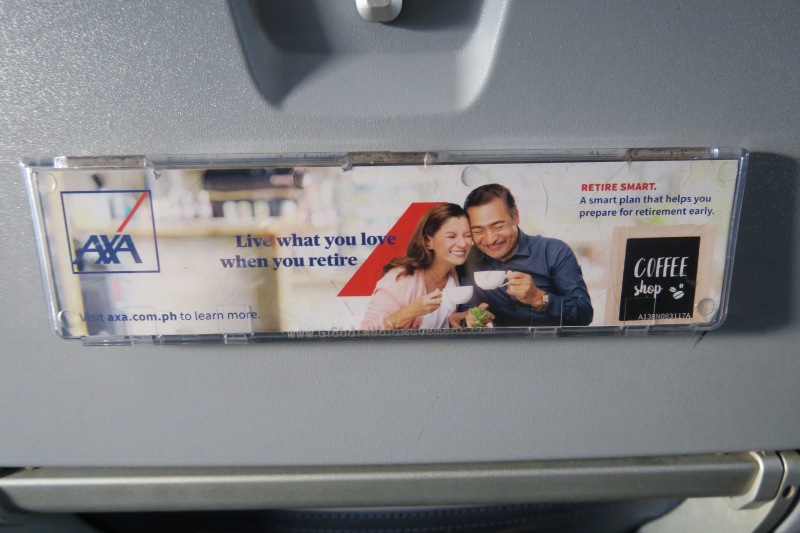 Our aircraft was around four years old, so it featured the new Airbus interiors.

Prior to pushback I had to use the lavatory. While Cebu Pacific’s A320 lavatories are basic, they’re clean, which I appreciate.

I liked that the sick bags stuck to Cebu Pacific’s rather fun branding.

While the boarding process was chaotic, it was quick, partly due to the fact that the flight wasn’t full. At around 8:35 (exactly the scheduled boarding time) we pushed back from our gate, where we waved goodbye to the Hong Kong Airlines A350 parked next door.

During this time I had a clear view of the cabin.

We taxiied away from the Midfield terminal, and made our way to runway 07R, where we’d be taking off that morning. 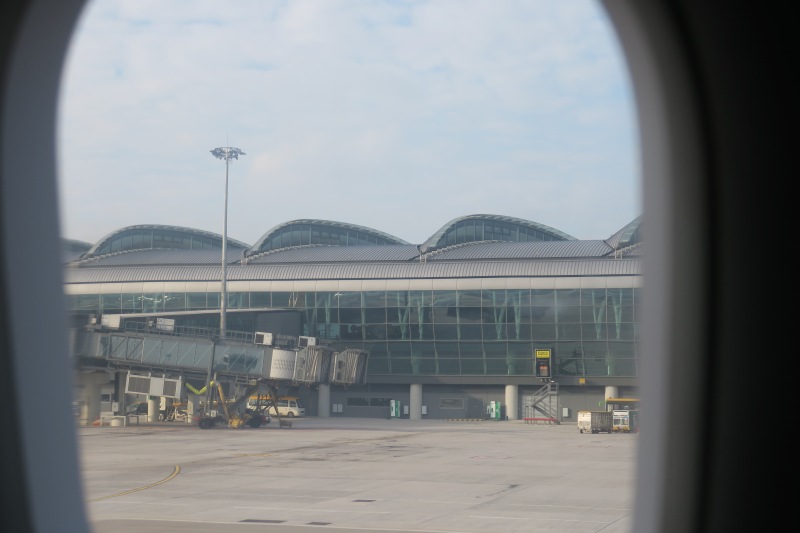 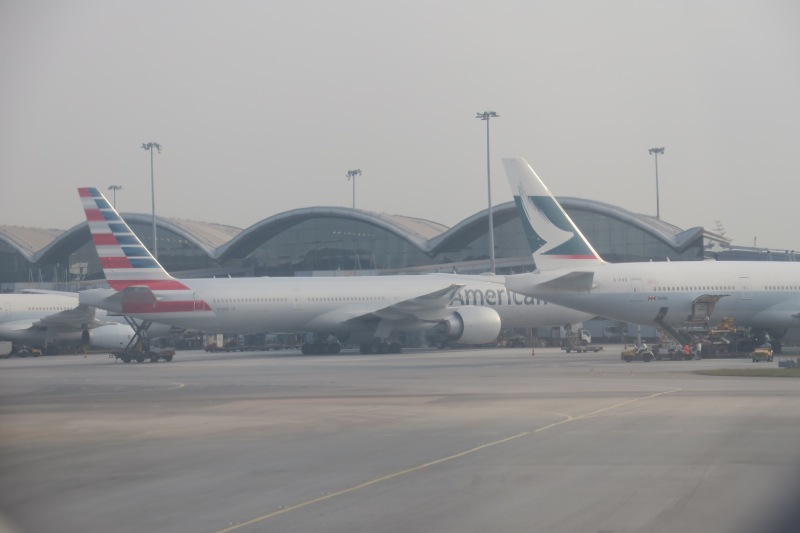 Prior to takeoff I needed some tissues, so made a “blowing nose” gesture to a flight attendant who was looking my way. Immediately he came with some tissues, which I really appreciated.

Our takeoff afforded spectacular views over Hong Kong, especially since it was a beautiful, and lightly cloudy day. 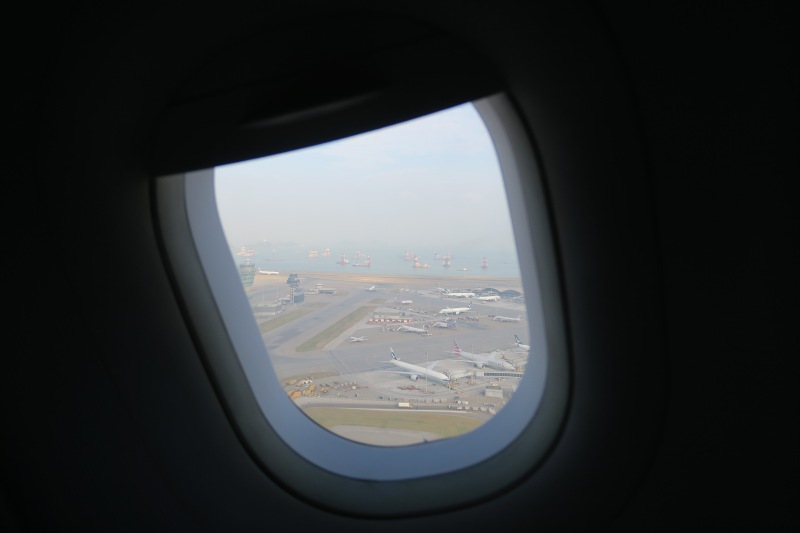 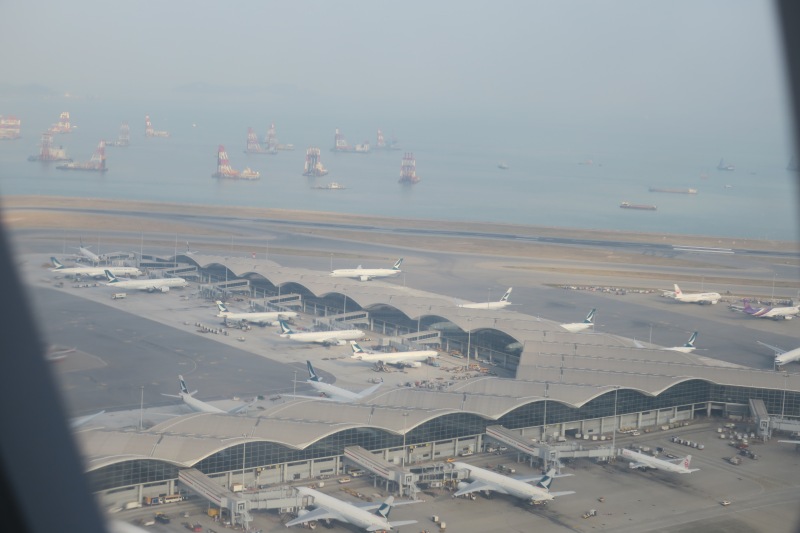 Matthew was a superstar, and offered to take pictures for me during takeoff. I’ll let the pictures speak for themselves.

Once the seatbelt sign was turned off the flight attendants did some sort of a trivia session, where we had the opportunity to raise our hands and “guess” what certain acronyms meant, for the chance to win a prize (it turned out to be some merchandise that Cebu Pacific sells on their flights, the largest of which was a Cebu Pacific plane plushy). The acronyms given were BRB, IKR and NVM, some of the acronyms I use basically every day – in fact, these acronyms are so pedestrian that I’m not sure why they’d bother.

Cebu Pacific tries to live up to their branding with this trivia session, and I like the concept, though it shouldn’t be this easy – I’d love to see an aviation-themed acronym guessing session, where they give acronyms such as ATC, IATA, 5J, PR, etc.. 😉

While I assume the buy-on-board menu was active on the flight, the only thing that we got was a bottle of water for 40 PHP (~HK$6). The only interaction we had with the flight attendants otherwise was when they passed out landing forms for the Philippines – however, the flight attendants were nice, friendly, courteous, and were happy to let me take pictures, so I was a happy camper. (Don’t worry – we went to town as much as we could with the buy-on-board menu on the way home, which I’ll be reviewing soon.)

Soon we were approaching Manila, where Matthew once again was happy to take some photos for me upon landing. 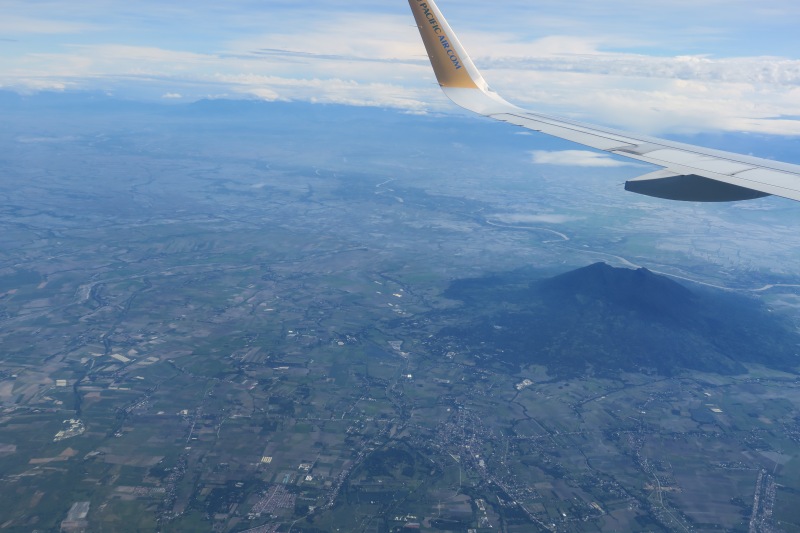 The views were intriguing, as I’d never been to the Philippines before. It was also a beautiful day in the Philippines, so I was looking forward to spending some time there. 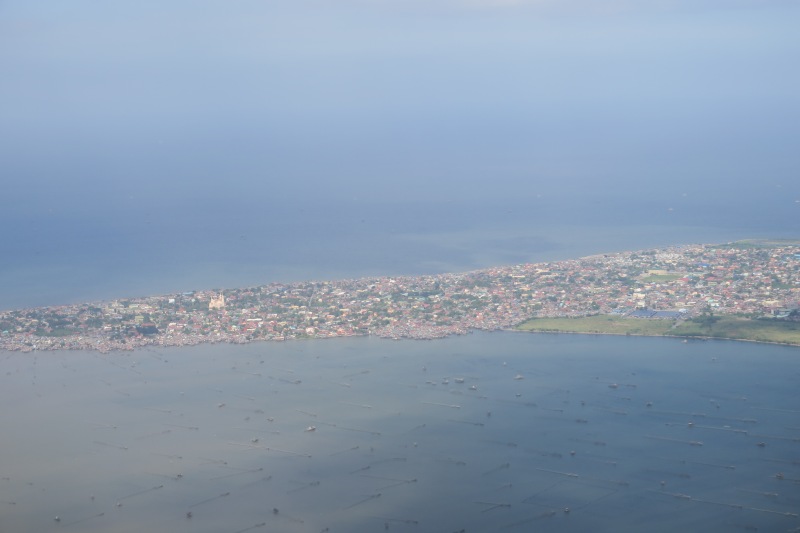 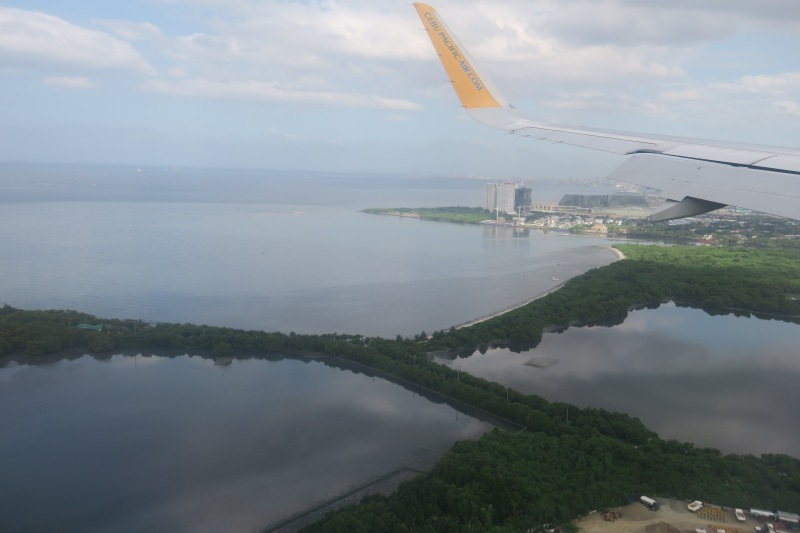 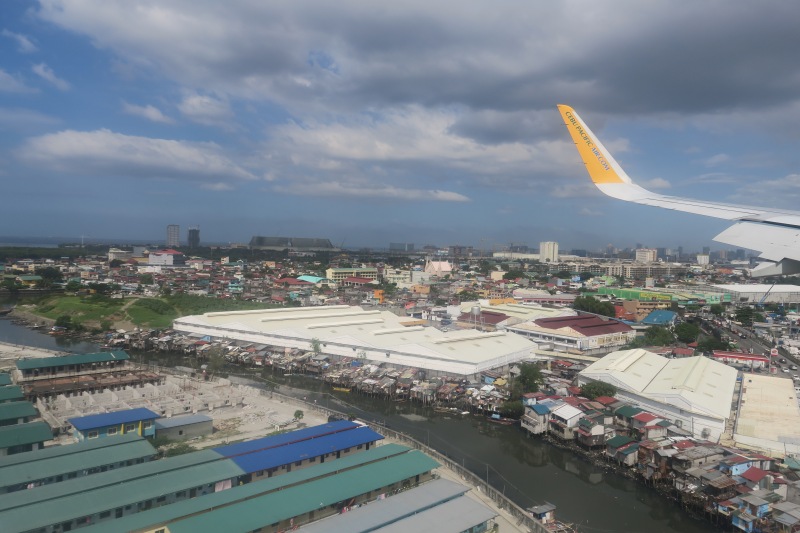 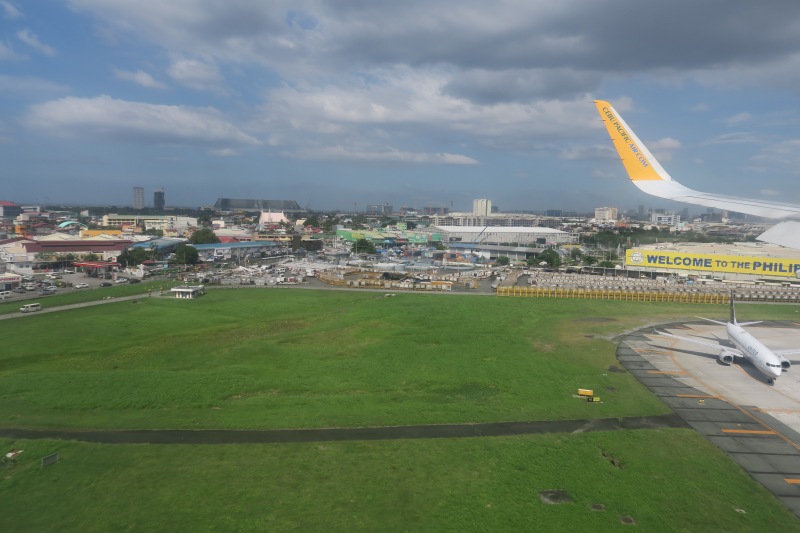 We touched down at around 10:40 AM, and made a relatively quick taxi to our gate at Terminal 3.

I sure had a hard time guessing the airline that operated the most flights out of Terminal 3. Can anyone guess which airline that is? 😉

The deplaning process was quick, though our baggages arrived a little later than we did at the reclamation area. However, getting into the Philippines was a really smooth process, and soon we were off to our building site in Pinamalayan, located around a seven-hour journey away. I won’t be writing about the experience, though I’m happy to answer any questions.

Cebu Pacific is a low-cost airline, and they don’t provide complimentary food on the flight between Hong Kong and Manila. However, the flight attendants were friendly, and I do like the trivia concept, even though I feel like it’s a little too easy to actually be engaging for the airline’s target audience.

Ultimately Cebu Pacific offers cheap fares, and many of the airline’s passengers don’t get to fly a whole lot. They do a good job making the experience as fun as flying on a no-frills airline possibly gets, and I respect the airline for that. As I’ve reiterated time and time again, I love an airline that sticks closely to their branding scheme.

Have you flown Cebu Pacific before? What did you think?