Update: Qatar Airways is offering A350s on both frequencies from December 16 to 31, 2017. I hope that’s good news for some of you!

Qatar Airways has operated the 787 to Hong Kong for quite a while. A long time ago they were a pretty unappealing product offering angled-flat seats on their A330 on the 8-hour flight from Hong Kong to Doha, though they upped their game when they switched their 787 onto the Hong Kong to Doha route.

Well, good news for a selection of passengers that are booked on Qatar Airways from Hong Kong to Doha in the near future. From December 2nd, 2017 to January 31st, 2018, Qatar Airways will offer an A350 on one of two daily flights operating between Doha and Hong Kong. 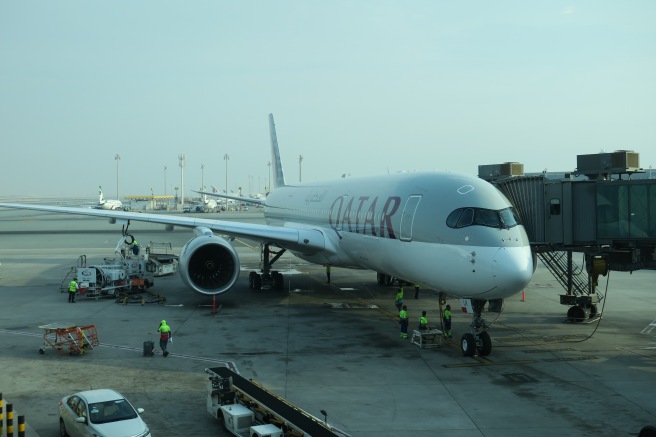 The A350 will feature a more premium-heavy configuration and a higher capacity, as well as a better onboard product. While I originally would have had the chance to try Qatar Airways’ A350 between Doha and Munich earlier this year, the flight was swapped to a LATAM-operated A350. However, the flight between Hong Kong and Doha will be operated by a mainline A350 aircraft.

The flight will offer more business class seats in an arguably more spacious cabin, though those booked on the other Qatar Airways flight between the two dates (operated by a 787) can rejoice in the fact that the hard product offered between the two planes is the same (while there are differences, they’re very minor):

The A350 also features a swankier entryway and a high-quality tail camera, though otherwise the differences are very minor.

Compared to the currently active switch to a Boeing 777-300ER, in the grand scheme of things the equipment swap to an A350 is relatively minor. Economy passengers may realise that extra inch of seat width, business class passengers will appreciate the spaciousness of the entryway and the extra mini-cabin (as well as the electronic window shades, as opposed to electrochromic windows – though that’s the most first-world comparison anyone could have), and I do prefer the A350 to the 787 overall. However, I doubt I’d go out of my way to change existing travel plans to accommodate the Qatar Airways A350.