I’m excited to have flown my second A380 leg, and am happy to report that the flight was great. This flight was onboard Lufthansa business class, which I’ve booked quite a while ago and have been looking forward to for quite some time. 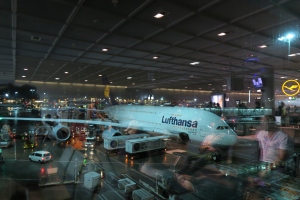 As I talked about earlier, the check-in process was the most rigged one I’ve ever experienced. I went onboard my first leg with really low expectations, and was blown away, though I’ll save that for the actual trip report. Instead I’ll be talking about the A380, which I knew would be one of the highlights of this trip.

So, how was Lufthansa A380 business class?

Lufthansa’s A380 business class seats are hard to describe – they’re different to the 747-8, in which the window seats face the same direction, so you’re not playing footsie unless you’re seated in the middle. They’re not B/E Aerospace Diamond seats, but they’re definitely not fully forward-facing…I’d call these similar to Qatar’s new A330/A340 business class seats or to Ethiopian’s A350 business class seats, but even then, there are notable differences. I haven’t flown that configuration before, so this was especially new.

Lufthansa’s business class seats are gorgeous, from the colours of the seat, to the pillow and blanket provided. As far as this configuration goes, I think Lufthansa did an amazing job. The seats are awesome for lounging, as it’s fully adjustable, from the lumbar support to the seat hardness. The pillows are the best I’ve ever had in business class – I love how plush they are, and they remind me of the reading pillows that I use at home. The blanket is also substantial, especially compared to the kitty blanket used in Swiss business class. I wouldn’t want to be seated in a middle seat, as the two middle seats still share a foot cubby. The window seats, though, have their own foot cubby that doesn’t feature a “ceiling”, so they’re not restrictive at all, something that maximised my sleeping positions during the flight. I’d also like to mention how spacious and pleasant the entire A380 experience felt in business class, apart from pre-boarding (which, as you’d expect for the world’s biggest plane packed full with 509 passengers, was a zoo). It was easily the most spacious plane I’ve ever flown in business class, and I’m really excited to be going onto two more of these this year. As far as I love, say, the A350, it can’t compare to this plane, in my opinion.

While I didn’t use them as I had work to do, it’s worth noting that Lufthansa features Bose headphones in business class. They weren’t noise-cancelling, but according to my dad, they hit the sound quality out of the park. I’d say these are the best business class headphones that I’ve had thus far. I haven’t been on an A380 in seven years, so I can’t really say if this is something that Lufthansa did well or something that’s true of A380s in general, but the toilets completely fit with Lufthansa’s brand theme. They’re not yellowish nor are they warm at all, and the lights are white to the point where they feel sterile. However, the slow rise in brightness is really soothing, and overall a really nice feature. The toilets at the front of the forward cabin also feature windows, which is actually a great feature, especially since the cabins were kept completely dark between mealtimes. This way, I get to look out of the window without disturbing anyone. It didn’t hurt that the toilets were positioned in such a way that I could look right out at the A380 wing either. If there’s one thing that lived right up to my expectations with my Lufthansa experience (apart from the seats, since I already knew so much about them), it was the food. I don’t remember the last time I’ve said anything bad about an airline’s catering in general (I’ve had underwhelming dishes on Cathay Pacific and Korean Air, but I’ve also had great meals on both), but Lufthansa didn’t hit the mark. I’m trying to be nice here, but it’s the first time I remember not finishing a meal…and I was hungry.

I had prawns to start – the prawns weren’t especially good, and cold mashed potatoes and tomato jelly aren’t my cup of tea. I had herb and curry crusted grouper for my main, which wasn’t good either – the herbs were raw and dry, and the rice tasted off. They sure know how to cook, though – each grain of rice moved individually, and was fluffy, it was just the taste that didn’t work. This was consistent of the Lufthansa dining experience in general – each element was cooked decently, but put together, it just didn’t work. At all. For dessert I had cinnamon mousse, which, while heavy, was probably the highlight of the meal. For breakfast, I picked the scrambled eggs with chives. I figured if Lufthansa can do good scrambled eggs in first class, business class scrambled eggs wouldn’t be too bad. I wasn’t wrong with the eggs themselves, though the tomato sauce tasted fake as could be. The muesli was fine as far as soggy muesli ever goes, the ham was decent, and I didn’t touch the cheese. So yeah, not gourmet, but whatever.

I don’t know what to say about the service, as the flight attendant serving my aisle was well-intentioned. She was a little clueless about the WiFi onboard (like telling us to “wait” for an SMS message when the system asked me to enter a code that it sent to me through SMS), though she was great in general. While reactive, she arrived at my seat within seconds of me pressing the call button each time I needed something, which was quite a few times as I stayed awake for quite a bit of the flight. She definitely wasn’t as good as the purser on my previous flight from Geneva to Frankfurt (I’ll save that for the actual report), though she seemed happy to be there, which is really all I care about. I also interacted with the crew member manning the stairs at the back of the upstairs economy cabin quite a bit, for obvious reasons – she was one of the nicest people I’d met yesterday. Speaking of service, the WiFi refused to show up on my computer, which is a function of my computer not being tolerant to WiFi login pages. However, once I was logged in, the WiFi was the fastest I’ve experienced on the go, and probably even faster than the speeds I had in my accommodation in Courchevel. No, it wasn’t fast enough to watch cat videos, but that’s even better for me as I actually get to focus on my science project due Tuesday. It was also priced at a comparatively inexpensive HK$142, which ultimately I’ll pay for to get ten hours of extra productivity. So yeah, even though it was my first time actually purchasing airline WiFi, I’m confident that it’s one of the best systems out there.

I thought that Lufthansa’s A380 was a perfectly pleasant way to fly from Europe to Asia. The seats were great as far as the configuration goes, the WiFi was great, and the service was good (and I’m sure there are other crews that may be much more comfortable with the A380). Overall, I’m pleased to have picked Lufthansa and would fly them again in a heartbeat, though I’d try to fly their A340 from Hong Kong to Munich, to see how a smaller plane would affect the passenger experience.