Hello back from home, officially starting my three-month no-flying streak. Stuff like this has happened in the past, but I suppose it’s a bit of a letdown to you guys after the number of products I’ve tried this year.

For those who don’t already know, I got CX’ed (glossary: to CX – to substitute an amazing world class/rare/special product for a less good product) for the third time in 2016 when my 777-300ER was substituted by a regional 777-300 (after a Korean Air 747-8 to 747-400 swap and a Cathay Pacific A340 to A330 swap). Economy prices to Osaka were over HK$9,000, so immediately I knew to say “no”. Right before we gave up, I found a business class package for HK$16,000. While the package wasn’t as lucrative as I thought and initially posted, I’d happily pay ~HK$3,000 more per person for business class, especially since I had such a big chance of getting Cathay Pacific’s international business class. And I did…on the outbound.

My inbound flight was supposed to be run on Cathay Pacific’s three-class 777-300ER, but it was substituted by a 777-300 halfway in – I realised this after some seats “opened up” for us. This was good news for premium economy, who got pushed up or refunded, and bad news for us.

Let’s be reminded that the value of this flight alone was ~HK$6,000…how much worse did it weigh up against international business class? While I wouldn’t normally post a post like this, the review of this flight will take a while, so I decided some first impressions would ease the wait.

While I flew the same seat to and from Fukuoka in 2014, I didn’t have anything to compare the seat to. I can’t say the same thing about that after being fortunate enough to fly business class regionally so much in the past few years.

In fairness, economy in shell seats for four hours isn’t worth HK$4,500 per flight either. I’d say demand was probably astronomically high for the dates we booked, but it’s a matter of expectations that took me down. It makes sense, though, as the 777-300 is Cathay Pacific’s highest capacity aircraft. Both business and economy are a huge step down from what was expected when I first booked this flight as a 777-300ER. 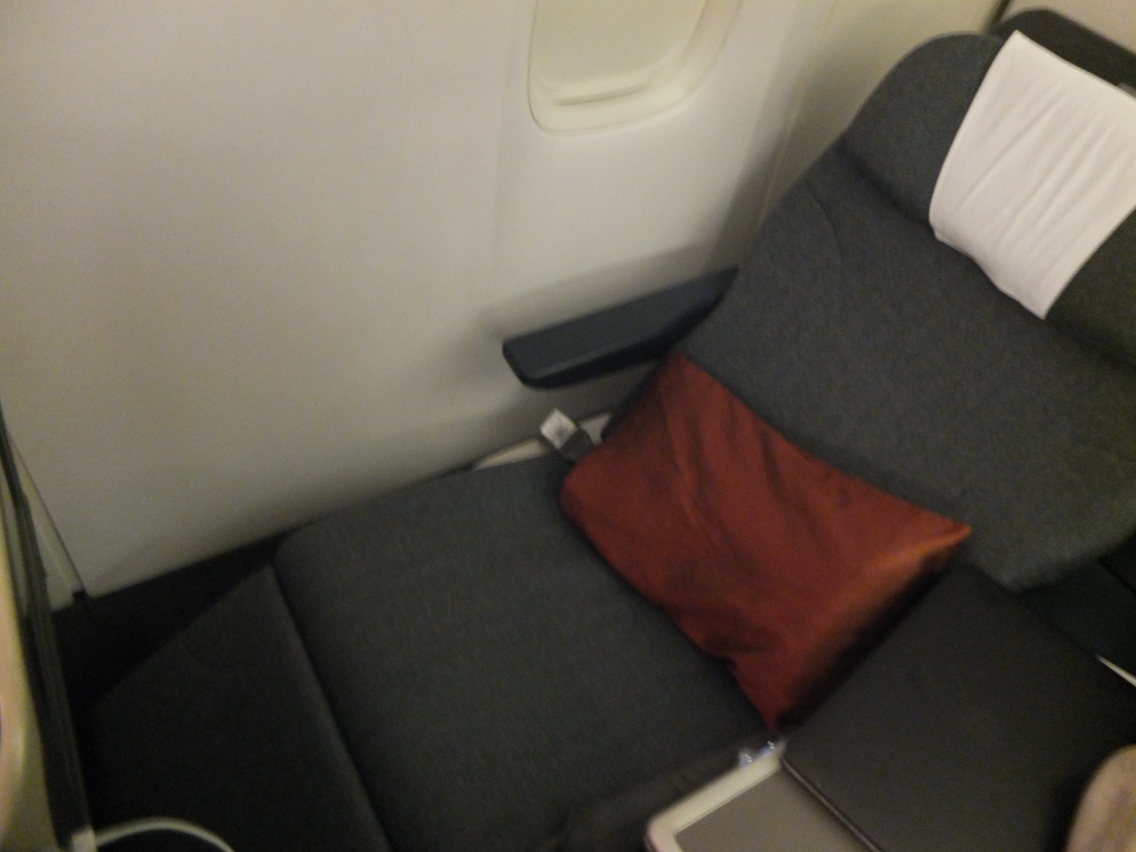 The seat’s acceptable if you know that coming in, but definitely not worth the same price as international business class.

Cathay Pacific’s 777-300 business class lavatories are no different from economy, with the exception of the flower by the side. It’s just as small, and the door faces the galley. As far as I know, there’s one toilet between all 42 seats in the cabin.

I’m not judging the aircraft type in this field, but more that the food was catered from Japan. My parents’ beef tenderloins were unevenly cooked, and my fish was definitely overcooked. Ordering beef is always a gamble on Cathay Pacific, but ordering fish isn’t usually.

Compare and contrast – no, temperatures were not asked for. 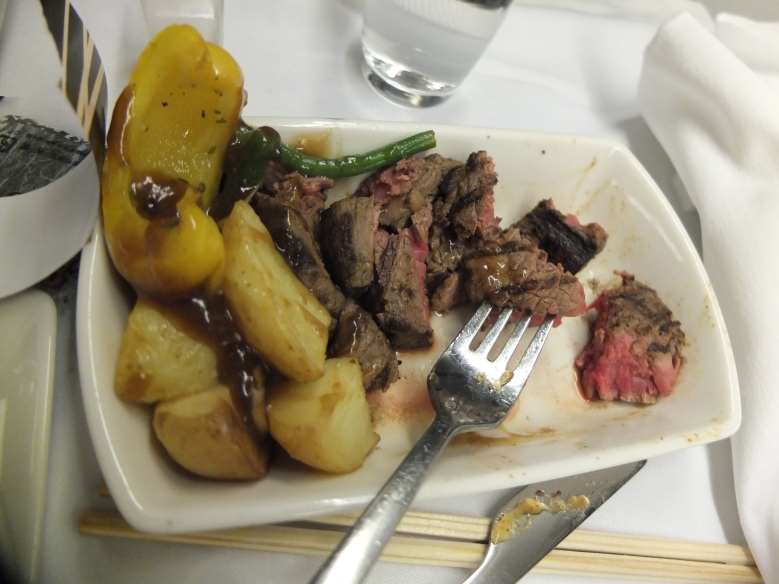 The ling fish was stringy and while tasteful, rather dry.

Overall, a meal I expected from outstation catering, but Japan…seriously?

I feel like this was one redeeming quality of the flight. The flight purser and all flight attendants were very organised, while also genuine. It didn’t feel like an assembly line, which is saying a lot.

While the purser was serving my mother fruit, he accidentally dropped a piece of papaya on the floor. Immediately he had a look of pure horror on his face and immediately he apologised to my mother with a bow. My mother said it was fine, and he thanked her. I really didn’t want to be rude, but I had to chuckle slightly.

It was better than the service there, that’s for sure – more on that in the full report.

But this is a game of expectations, and for this time it was not well played. There wasn’t an apology or whatever, so I have no choice but to feel disappointed with what I booked expecting and what I actually got.