As you guys all know by now, Korean Air’s business/prestige class coloured me very impressed. I don’t really have much to say about the Hong Kong to Seoul Incheon leg, but the Seoul Incheon leg was (empty and) amazing. While I was blown away with the soft product, there’s no denying that Korean Air’s hard product is a tad disappointing.

The 777-200ERs are on their way out on Korean Air, but you’ll be stuck with this seat no matter if you’re on a 777-200ER, an older 777-300ER, an A330-200 or an A380. Given that I used to write for economy flyers, are all business class products better for sleeping compared to economy class products? After these flights, I can confirm and say, not necessarily.

Hear me out here: they’re definitely better, but not always for sleeping. So what makes a good product for sleeping, in my opinion?

While the first point is kind of bad for all seats on Korean Air, this leads me to my main point – what are the best seats in Korean Air’s 777-200ER business class? Korean Air’s business class features two almost identical cabins of 14 seats each, in a 2-3-2 configuration. While the seats are fully flat and great for shorthaul flights, they’re kind of less amazing for longhaul flights on 19-year-old planes, in my opinion. The one and probably only difference between the two cabins is between row 8 and 10. Row 10 is normal, but row 8 is missing a window.

The window missing isn’t the one next to the seat, but rather the one in the middle. So if you’re in the window seat, you’re fine, but you won’t get a clear view when craning your neck if you’re in an aisle seat. 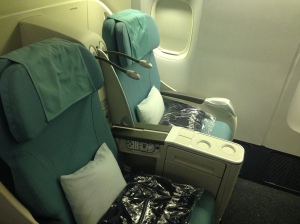 Is row 8 the worst row to pick? Not sure, I’ll get to that later.

So with that in mind, what are the best business class seats on Korean Air’s 777-200ER?

WHAT ARE THE BEST BUSINESS CLASS SEATS ON KOREAN AIR’S BOEING 777-200ER?

For the first leg I took seat 10B, and for the second leg I switched between 7E, 7F and 7H (if that’s any indication of how much fun I had otherwise during the flight). There’s really not a “normal” row in this cabin that doesn’t have its own upsides and downsides, given that there are only four. The window and middle seats are way better for sleeping. 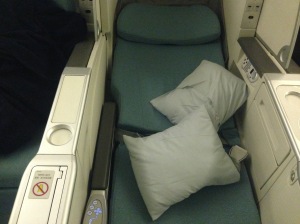 Meanwhile in an aisle seat there’s zero privacy, as the designated “wing” by the side doesn’t really go past your ear. I think this is a first, but with the cabin being pretty empty I ended up voluntarily moving from my aisle seat to a middle seat to sleep.

Row 8 is missing a window.

As stated above, it’s really perfectly acceptable…just a bit less so for the guy in 8B or 8H when passing through Seoul just before 7 PM. View Upon Taking Off Incheon

Rows 9 and 10 are significantly less private.

When boarding, all economy class passengers pass through door L2. So there’s literally zero foot traffic if seated in rows 7 and 8, while everyone moves past you when you’re in rows 9 and 10.

Also, upon takeoff and landing, people know who the “spoilt ones” are, which is really uncomfortable – much more than it sounds. It’s also significantly noisier (for some reason, as the economy cabin was pretty quiet). Rows 7 and 9 have latched in TVs that have to be stowed during taxi, takeoff and landing.

This means that you won’t be able to watch the airshow. Well, I’m fine with that, as takeoff isn’t gonna take more than 10 minutes. They’re fully adjustable, which is actually a plus, in my opinion. Furthermore, Korean Air’s 777-200ERs don’t feature tail cameras or anything, so everything’s all good.

If I were travelling alone, I would go for seats 7A or 7J.

They have windows, are pretty quiet, and aren’t too bad for sleeping. The takeoff TV situation would probably last for a total of ten minutes, which wouldn’t really matter unless your flight was crazy short (for example, if you were flying from Seoul to Jeju). If you’re into first class jealousy, the view of the cabin isn’t nearly as evident as if you were seated in the aisle seat. My other choices would be as follows:

If I were travelling together, I’d take seats 7A and 7B, as there’s significantly less foot traffic there. But if travelling in threes, if required to sit together, the middle seat wouldn’t hurt, due to how much better it is for sleeping.

If travelling in fours like our family did, I wouldn’t change the setup, and would stay in rows 7 and 8 on either side. Just that if you’re in the aisle, bring a book, bring some work, as you’re probably not getting a good night’s sleep. With this type of soft product, you’re still looking towards a great flight.

I’m still waiting for my Monday flight on the 747-8, though.