I was kind of dreading this flight. While the fatigue after the outbound flight could be salvaged with a nap, the inbound flight was kind of troublesome given it was a redeye under three hours, so technically it would be 4 AM Myanmar time when we got back to Hong Kong.

We left the Myanmar Life hotel for the airport at 11 PM, getting to the airport in about five minutes ready for check-in. While the airport exterior is rather drab (I’d been used to seeing Yangon Airport by now), it was basically still functional, in the sense that neon lights haven’t started hanging down the walls or anything. 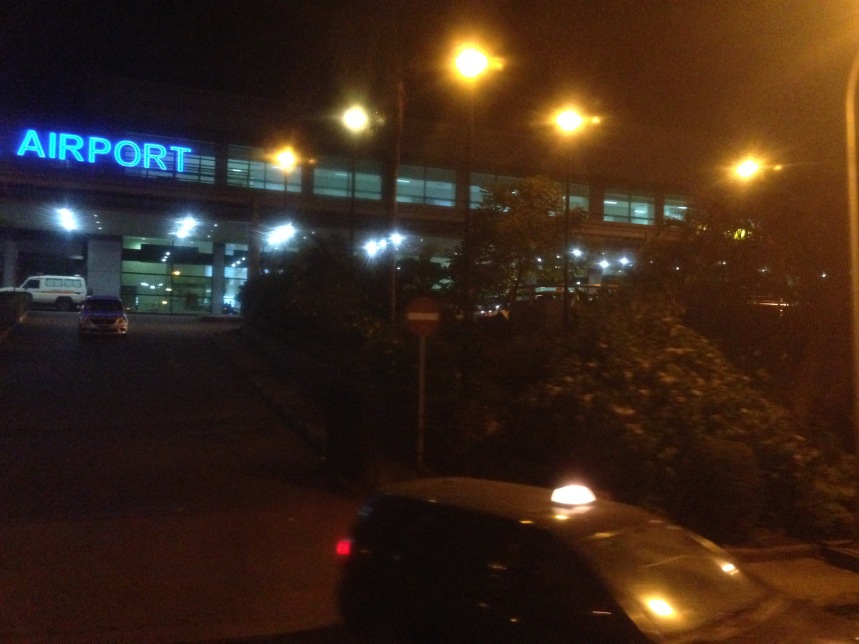 Our Burmese mentor and tour guide Po bid farewell to us outside the security-only check-in area, and handshakes were exchanged between us before we disappeared into the check-in area.

I made my way into the check-in area, which wasn’t crowded, mostly because our flight was the only one flying at the time. The line was reasonably long, but we were entitled to group check-in. 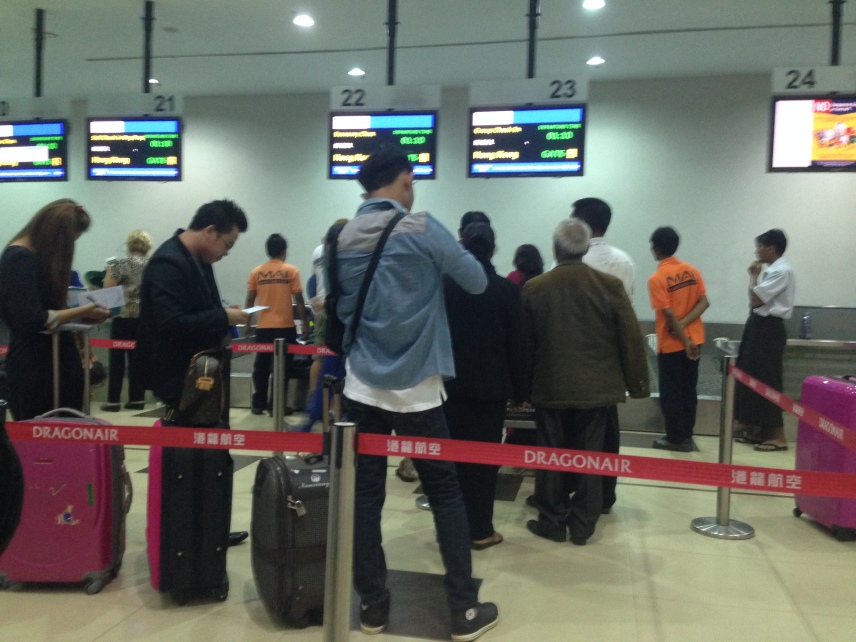 The lead teacher was bumped up to business class for the flight, which really wasn’t a good sign for the load back in economy.

Dragonair had blocked off the same seats for us, so having the seats arranged in alphabetical order every time someone didn’t assign seats, I was assigned the same seat, 46H, an aisle seat on the second last row, which I was happy with.

After customs (Yangon Airport’s immigration is at individual gates), I made my way with a few of my friends to a coffee shop to change our money back to US dollars, as Myanmar kyat is unexchangeable in Hong Kong.

With a bit of spare time to go, I made my way past immigration and got inside the gate area, which was a level down. I spread out against a few seats to catch up on a bit of rest, knowing the next day would be rather tiring.

Late at around 12:30 AM the inbound flight, our A321, turned up at gate 2 behind schedule, though nothing was said regards our flight being late.

Shortly boarding for business class and oneworld status passengers began, followed by those in rows 40-47. Backpack and boarding pass in hand, I got onto the flight, ready for a nap.

Last year over four days I flew one of Dragonair’s older A330s followed by one of their newer ones and recorded the difference I noticed.

This flight was operated by one of Dragonair’s older (but refurbished) A321 aircraft, B-HTF. While the outbound, B-HTJ, was less than eight years old and was decently quiet, at nineteen years the cabin pressure, noise and humidity on this flight were noticeably of a lower caliber. Nothing beat my China Eastern flight earlier in the year which had less than a year down its pocket, and I was used to ~20-year-old aircraft anyway given I’d flown two of them in the last five days before the flight, but it wasn’t the modernity I was hoping for. Oh well. 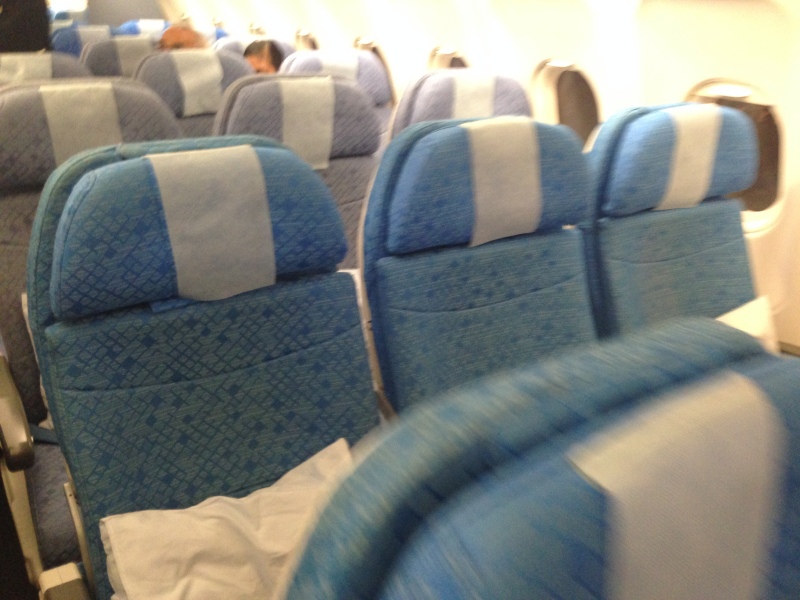 Legroom was adequate – as noted, this was one of my favorite economy class seats in the air up until now, and I wanted to see how a redeye would change that.

One of my friends was assigned seat 45K, however, there was a lady in the seat. The lady was assigned to sit next in my row in 46K, but she misread the overhead panels, so she proceeded to move beside us and provide a hangdog expression for most of the flight. 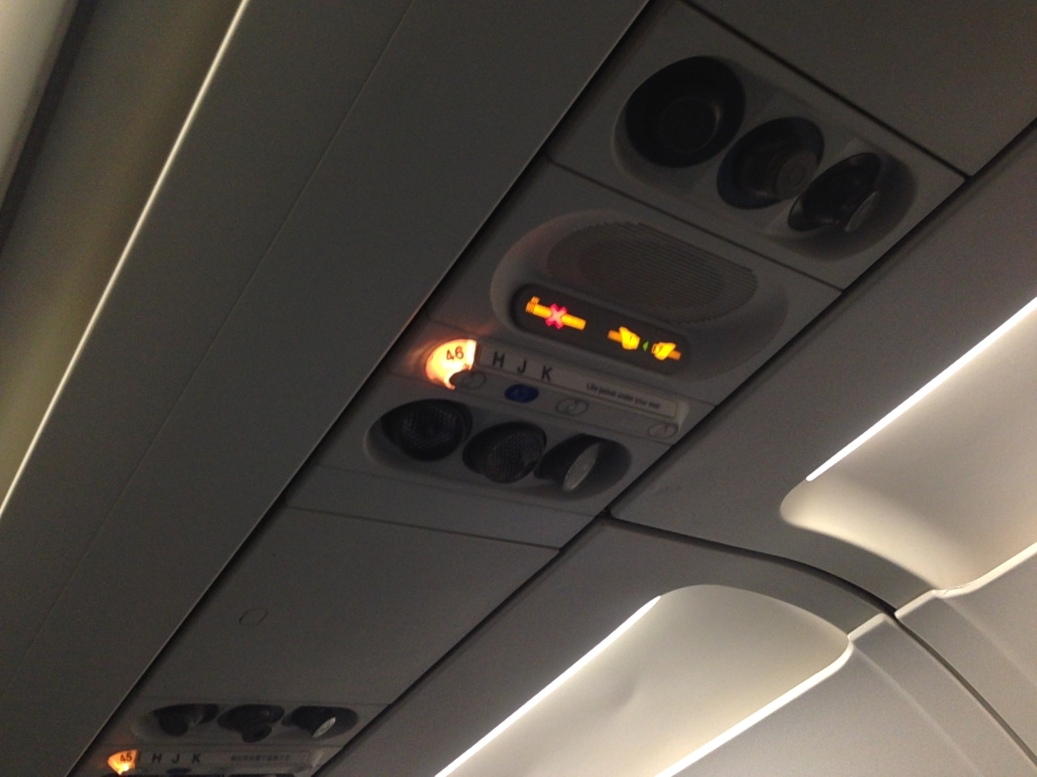 Speaking of the panels, I liked that there were individual air nozzles, which I got on all four of my flights this week. However, these weren’t adjustable (either that or they were just so old they got stuck).

You really have to be on an older A321 to realise how spruced up the new ones are. The old ones just look rather drab and boring. 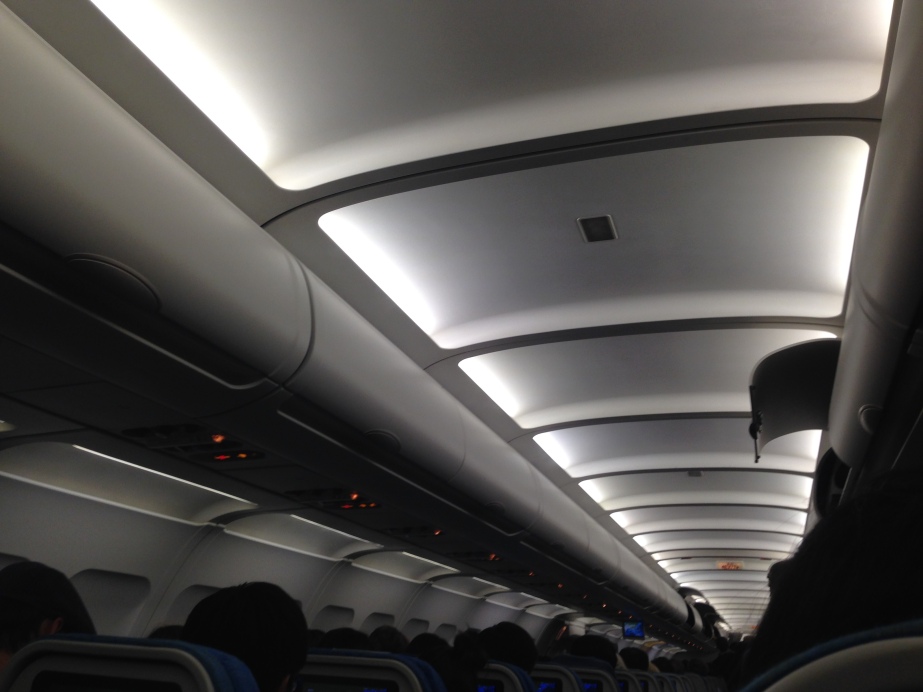 Soon the door closed, and the safety video played. Dragonair has one of the most boring safety videos of any airline, which stays true for all the airlines I flew this year. 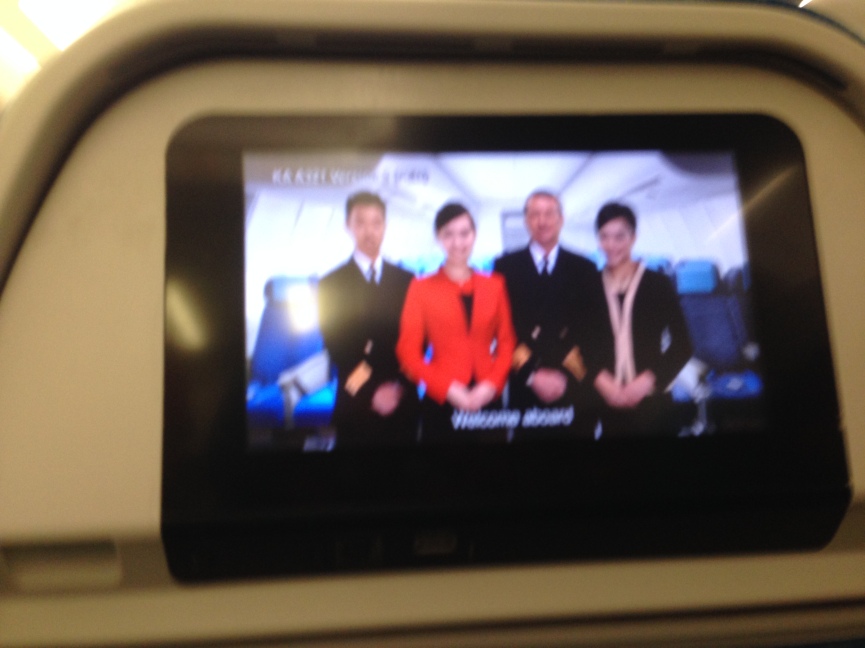 When that finally ended Ayan went to sleep, while I turned on the airshow (I wanted to review their meal offering before sleeping, especially as this was my first time getting a boxed meal on Dragonair).

I didn’t have a cable so decided to get one at Hong Kong Airport. In the meantime, one of my friends had an extra device to charge, so I let her charge on my USB port.

Shortly after that we pushed back, and as disappointed as I was to be bound for home, I was excited to be able to get back with family. Dragonair’s older windows don’t have the “new” silicon lining on them, rather they have standard A330-style windows – having not been on an Airbus narrowbody for a long, long time prior to the outbound on this trip, these details were rather unmissable.

While in business class you can kind of relax during this time, in economy it’s hard not to get bored during an aircraft taxi. I started taking cabin pictures. 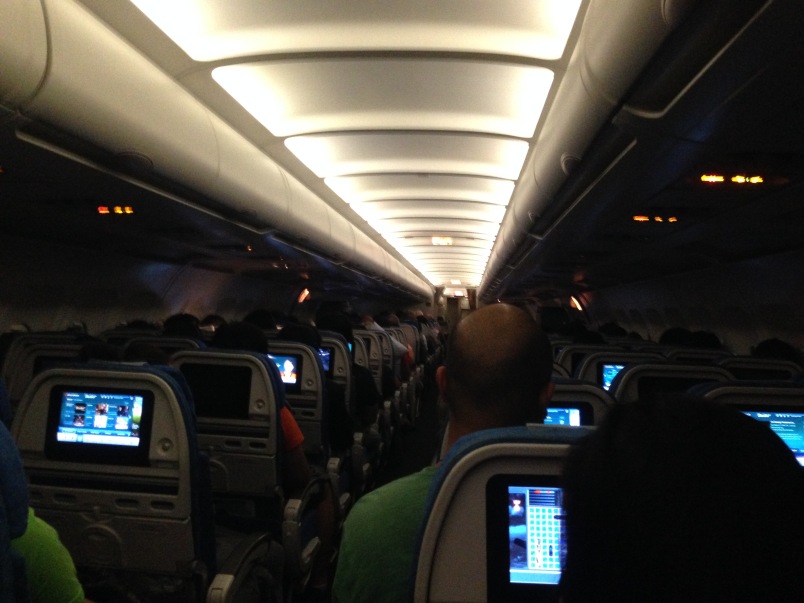 And soon we were off, after catching the last glimpse of the mystic lights that had so intrigued me when flying in the week before. 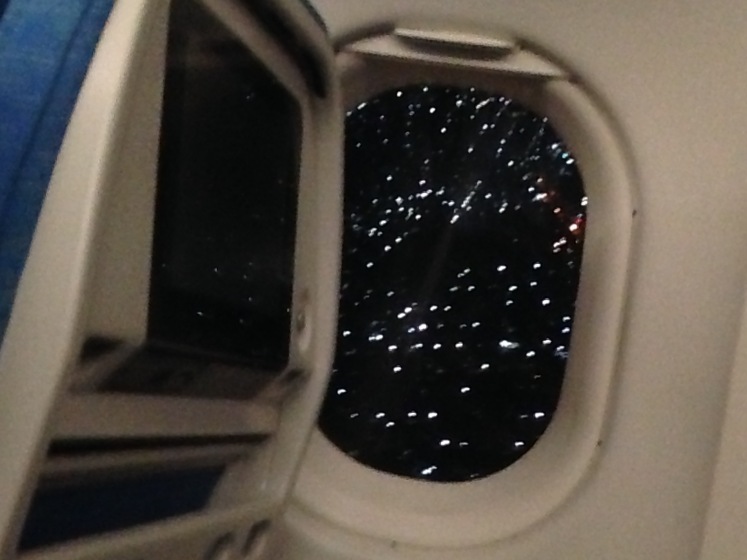 During this time, I was busy trying to take HD closeup pictures of Ayan sleeping, which eventually managed to stifle a laugh from the stone-faced woman in 46K.

Shortly after takeoff, I took the opportunity to photograph the cabin, as I needed the washroom anyway. The aircraft features 148 seats across 29 rows in one single cabin.

The washroom was mostly unchanged from the outbound flight, and also featured Nobility amenities, which I won’t rehash.

I explored the seat a little bit before the meal. Evidently the tray table is perfect for working, as it can be folded if desired. 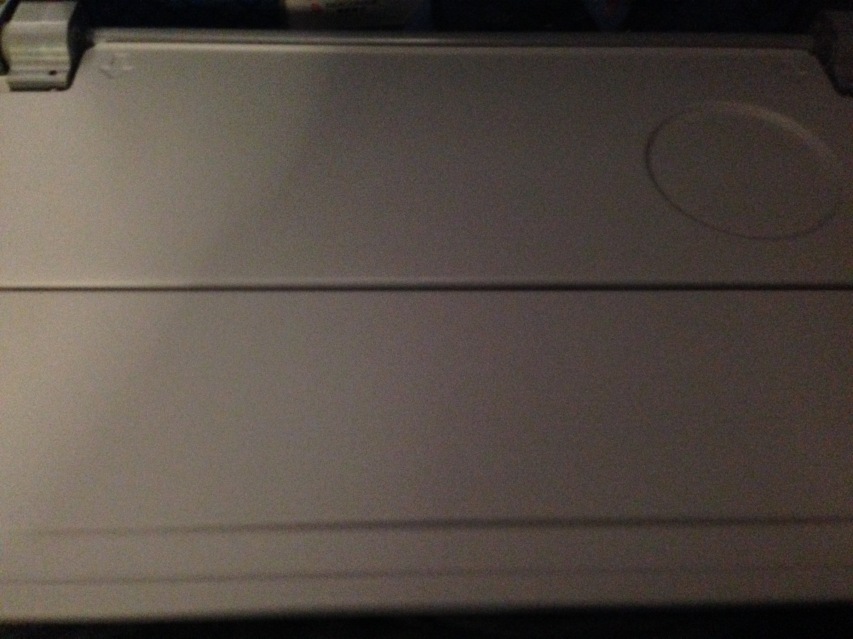 There are no menus distributed on the route, but the aircraft was obviously running one of the Shanghai to Hong Kong routes prior.

Soon one of the boxes were rolled out. While I’ve had some unpleasant experiences with boxes, this one was actually really tasty. It featured some type of a smoked beef sandwich that was really delicious, fruit and chocolate.

The meal was served a bit into the flight, and it took around ten minutes to finish. I mean, damn was it tasty. 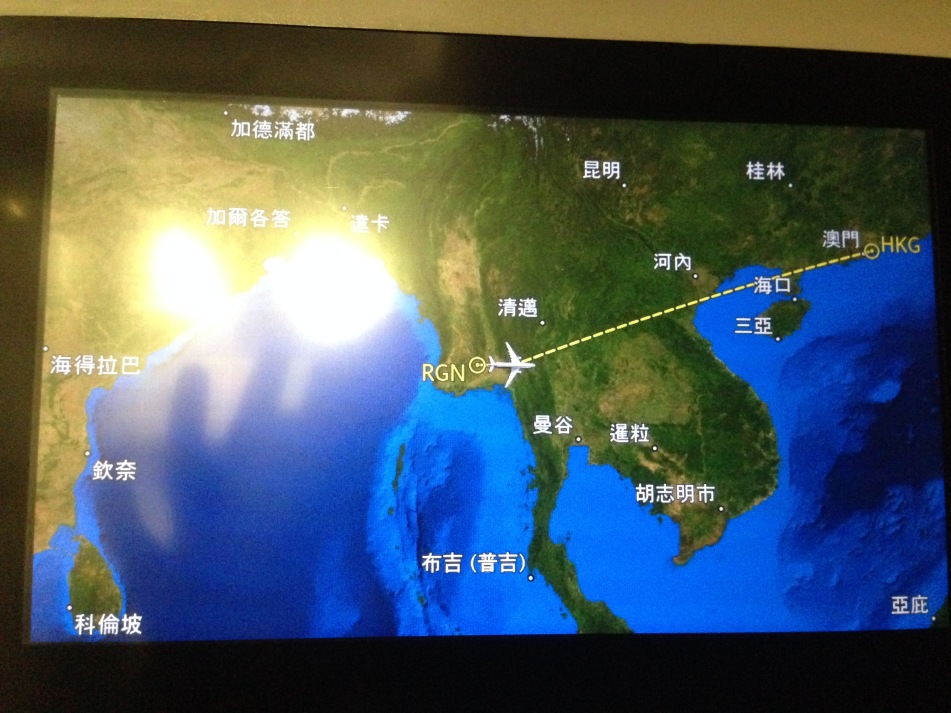 I was really done by then, so I slept amazingly well for the next hour, waking up over Hainan. 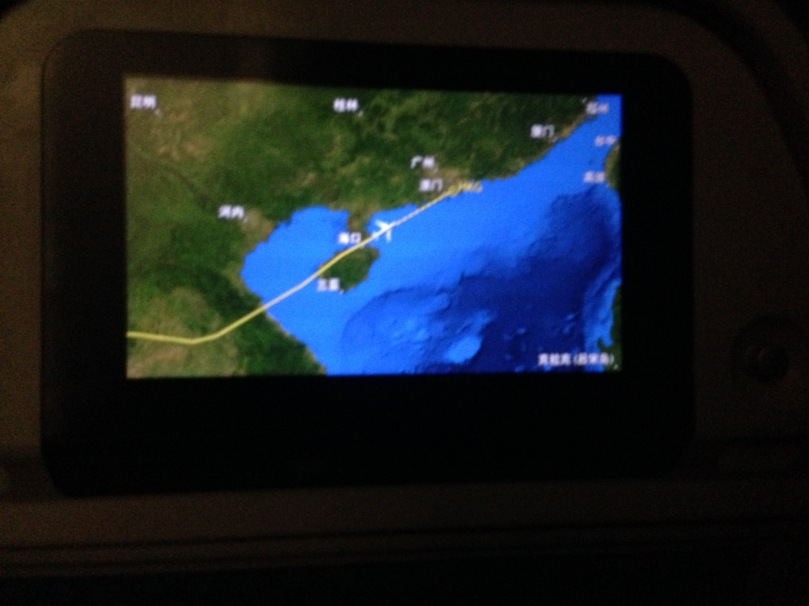 Dragonair Airbus A321 Position over Hainan

At that point I lost my glasses. The crew saw, seemed to be genuinely worried, and helped me turn on my light before I eventually found it in Ayan’s seat pocket (he was asleep for the whole time, so I don’t know how it ended up there). While I appreciated service there, the service was average economy class for the rest of the flight.

At that point I dropped off back to sleep, waking up with the cabin crew announcement “30 minutes till landing”.

I couldn’t take any pictures of our descent given my distance from the window seat. 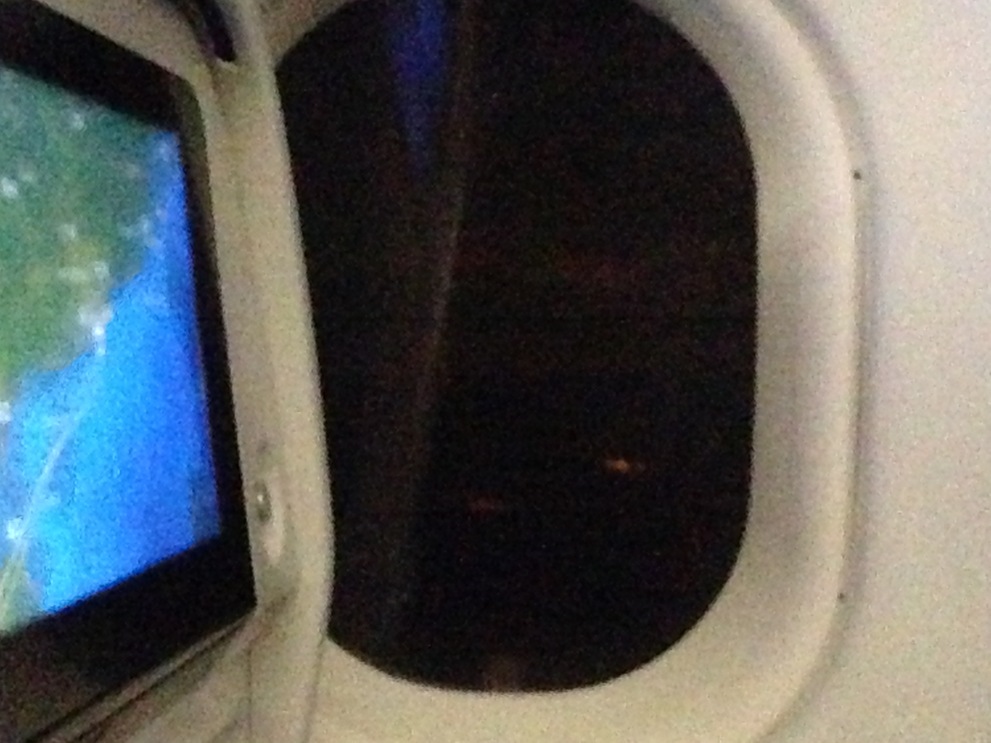 We touched down in Hong Kong a bit behind schedule at 5:30 AM, where I was ready to get refreshed for the rest of the day.

Unfortunately we arrived at a remote stand, so it took us a lot of time to deplane. First the business class bus left, then the same bus came back and took the first half of the cabin, and so on, so it was near 6 AM when we got to get off the bus. Plus, we almost missed the bus. I wanted to get bumped off the bus so I could get a few tarmac pictures, but there was a space for me, and I was tired anyway, so I got on, not really ready for a new day.

I was able to get a slightly better shot of the aircraft, but I know I could have done better.

We were bussed to gate 525, where we made our way past immigration. While that was a breeze, one of the buses carrying half our luggages (mine not included) decided to drive to the wrong gate, so some of us had to wait for a little more than half an hour. While I decided to wait for them for a while, I decided I needed another phone cable anyway, so left the group at 7 AM, catching this amazing sunrise from the departures hall airport window (it nearly rivalled those at Myanmar – I kid). 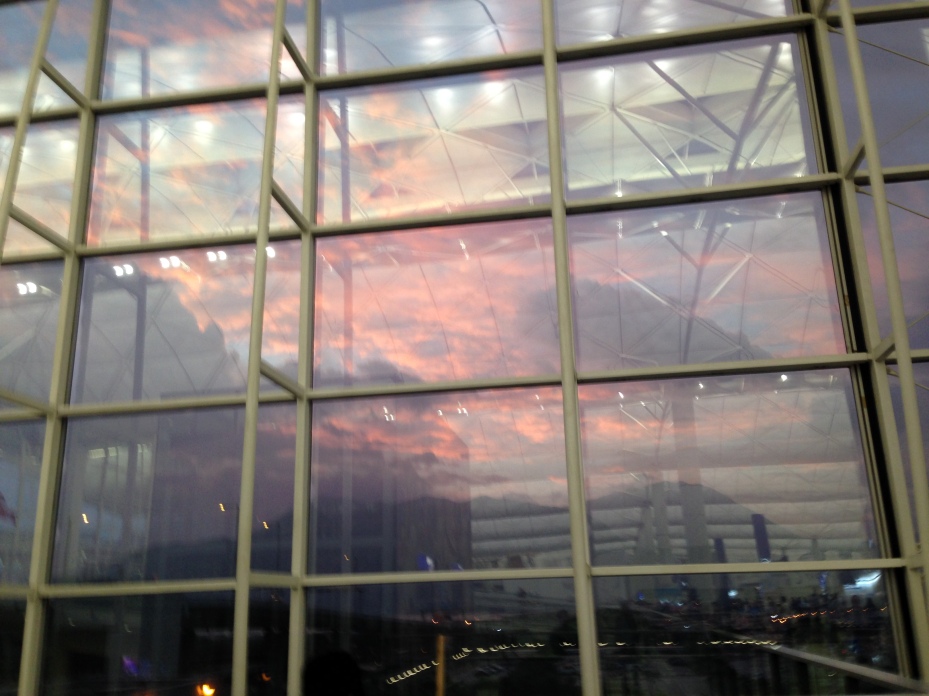 While it was a little less comfortable than the outbound this time with a full load, the Dragonair seat was padded well, featured good IFE, had fully adjustable headrests and reclined pretty well. This remains my favourite economy seat in the air, and I’ve found it to be exponentially better than any other regional economy class seat I’ve flown lately. The service and food were fine on this sector though nothing special.

While business class was marginally better, it wouldn’t be worth the price for such a short flight (especially with the load they had, too – they were full). I look forward to flying this seat a few more times next year.

DID I ENGAGE MYANMAR?

While the days I had at Myanmar were hectic, I left feeling like it was well worth it. One thing I missed in the teaching report was that on the third night, one of the parents of the kids came to our restaurant and sang us a song in Burmese, and it basically meant “some thank you’s are harder to say”. There’s really nothing I can sum the trip up with apart from that sentence.

Answering my question. Yes, I believe I did a good job on this trip. There’s really not a trip where I could come back feeling enlightened, but this was definitely one of them.

I miss my kids, so I’ll probably get back to Myanmar at the same time. While a tougher journey wouldn’t stop me, I wouldn’t mind flying once more in comfort. 😉