Emirates operates out of one of the world’s largest hubs, Dubai International Airport. While I’ve never been, I know for a fact that it’s one of the world’s busiest airports. It’s also one of the most hectic, as the airport’s been around for a while, and the airline has had exponential growth throughout the past decade.

Emirates operates a hub-and-spoke model, which means that they focus on serving one-stop flights between a wide variety of destinations at high capacities (they have, by far, the most A380s in operation out of any airline, and have 6.75 times more A380s on order than the next biggest operator, Singapore Airlines), which further adds to how busy their Dubai hub is. They seem to be doing quite well – from Hong Kong alone Emirates offers three daily A380 flights (the most of any airline out of Hong Kong), one of which routes through Bangkok, and an additional 777 flight, and they’ve done so for many years. They also have quite a good reputation in Hong Kong, as many more have heard of Emirates compared to their Middle Eastern counterparts, Etihad and Qatar Airways (both of which also fly to Hong Kong). 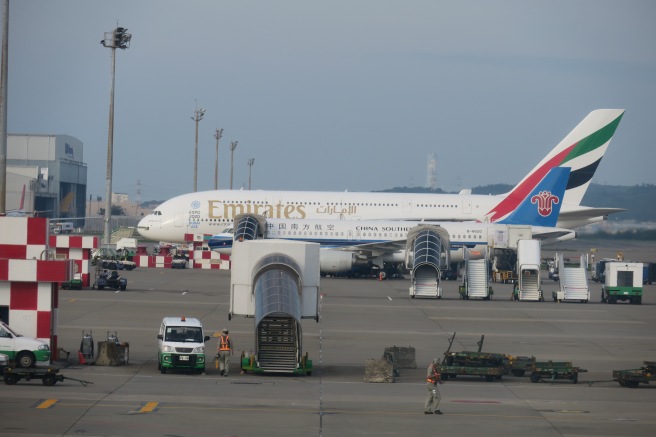 Four routes that Emirates runs will be cancelled outright

Per Airlineroute, during the second quarter of 2019, Emirates will be cutting four routes:

Notable service cuts on other routes

Emirates has cut hundreds of routes per week from their routemap during the runway upgrade, which Airlineroute has outlined. Some route cuts were particularly impactful: While these were the most significant cuts, quite a number of cities across South Asia and Europe faced at least one daily flight cut, which speaks both for Emirates’ copious amounts of flights to all of their destinations and the impact that the runway upgrade will have on their routes. We’re talking frequency cuts for up-to-615-passenger A380s and high-density 777s with 7-abreast business class seats and 10-abreast economy seats, so these aren’t light capacity cuts.

While Emirates has a decent business class product on their A380, their planes are quite high-capacity, especially their 777s, which means that each frequency cut represents quite a significant capacity reduction

What should we make of this?

For those who are lucky enough to still snag an Emirates seat during the second quarter of 2019, this is good news, especially if you’re in a premium cabin. It means that security lines will be shorter, and lounges will be less crowded.

Otherwise, for the short-term, this is very bad news, both for passengers and Emirates. Since there’s a decrease in capacity supply, it’s only sensible for prices for Emirates flights to increase during this time. Also, this means that it’ll be much harder to come across award space on Emirates for all of the affected routes (personally this doesn’t affect me since I won’t be able to get an Emirates seat anyway with any of my mileage accounts, though this might impact others much more). This also means that Emirates might see some losses during this time, though it isn’t as much as a problem for them as it is with Etihad and Qatar, as they’re the most profitable airline out of the three by far.

In the meantime Dubai World Central Airport is open, and we might see Emirates gradually shifting towards Dubai World Central as their new airport. However, since the capacity reductions have already been announced and all the cut frequencies have become non-bookable, I doubt that’s happening anytime soon.

Have you been affected by any of Emirates’ frequency cuts?