While United flew the world’s first 777 commercial flight, the first 777 produced actually belongs to Cathay Pacific. This is because Boeing used a 777-200 as a demonstrator for a few years during the airplane’s launch, and Cathay Pacific acquired the plane in 2000, and continue to operate it today. From then on, avgeeks around the world have made a point to try and fly on it, as there aren’t many 777-200s in Cathay Pacific’s fleet.

I had the chance to fly B-HNL (this aircraft) in June 2016 between Hong Kong and Taipei when it was swapped in place of an A350. Cathay Pacific’s lone A350 was grounded in Manila due to a battery error, and suffice to say that I was quite disappointed, as I was excited to try out Cathay’s A350 within the first month of its launch, not to mention that Cathay Pacific’s 777-200s are all configured with their subpar regional business class seats. Fortunately I was able to sample the A350 on my return flight, so all was well there.

This is part of a larger scheme where Cathay Pacific plans to take out their small 777-200 subfleet. Their plans are to retire two this year, and their other three early next year. It’s sad to see them go, for a variety of reasons.

Cathay Pacific’s 777-200s currently run regionally, shuttling between Hong Kong and high-capacity routes. They run in a two-class configuration, with 42 seats in business class and 293 seats in economy.

For business class passengers the retiring of the 777-200 is great, as it only leaves 777-300s and select A330s with Cathay’s rather sad business class seats. Since Cathay currently isn’t taking delivery of any 777-300s or A330s, this means that more of Cathay’s regional routes will be flown by longhaul configured aircraft. 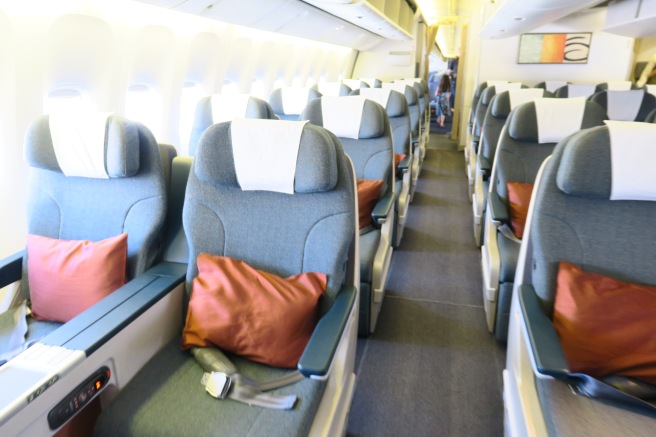 However, this is pretty bad news for economy passengers. Cathay Pacific plans to reconfigure all their 777-300ERs and 777-300s with 10-abreast economy seats by the end of the year, and those seats don’t look so good. The airline operates their comfy, plush “old” economy class seat on their 777-200s, so going forward only the A330s will feature this seat.