It took a bit of time to find the Andaz once we arrived in Amsterdam because of some construction that blocked the most direct path to the hotel. The hotel was easily distinguishable by the large Andaz flag outside of it. The hotel is located right next to the Prinsengracht Canal, hence the name. 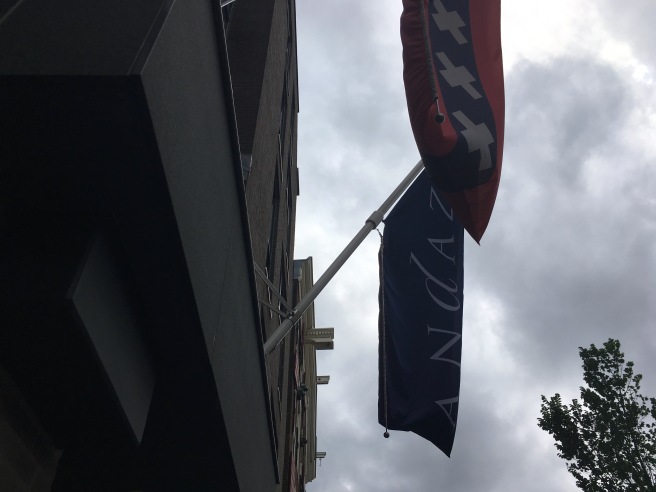 The hotel is decently located. While it’s a little out of the way and not smack dab in the middle of the Centrum area, Amsterdam is an extremely walkable city and it took us 20 minutes by foot to reach most major tourist attractions from the hotel. The local area also has quite a few excellent restaurants and shops.

There was a small Andaz plaque at the front entrance.

There were small displays of Dutch-style pottery in the entryway. 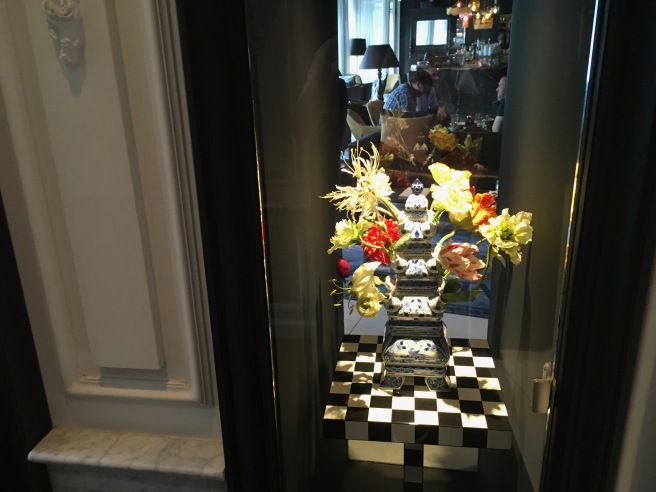 Upon entering the hotel, I was stunned at how beautiful the lobby was. The first thing I saw were three circular desks, which essentially acted as a front desk and concierge all rolled into one. As is the case at Andaz hotels, we were invited to take a seat in the common area and offered a drink and told to wait for an associate to come around with a tablet to check us in. 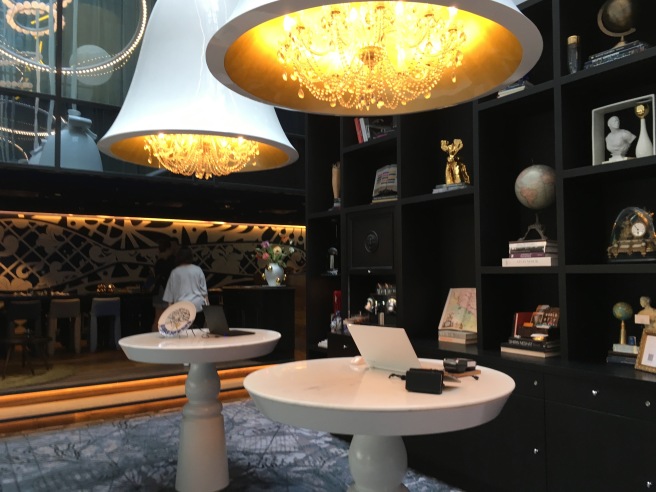 On top of each one of the desks was a bell-shaped decoration that housed a chandelier.

Just off to the side of the front desk was a section of seating containing high-backed chairs, which is where we sat down awaiting an associate to check us in. 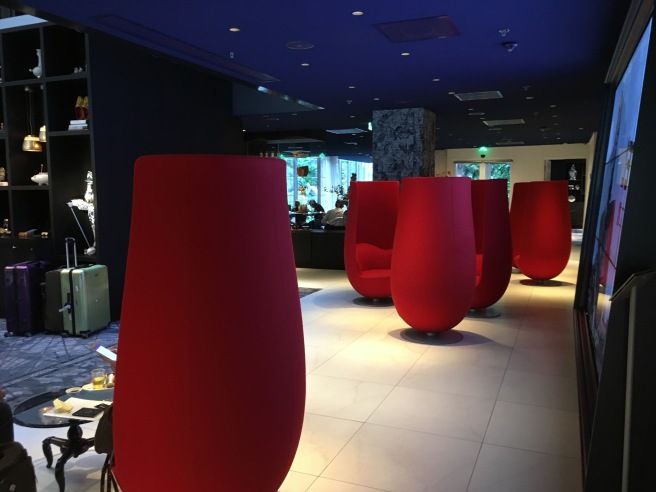 One thing to note about this hotel is that it might as well be a modern art museum. The public spaces were filled with displays that might as well have belonged at the MoMA in New York. On the wall of the lobby was a set of flatscreen televisions showing a video about dismantling of a large container ship.

I took a peek into the lobby lounge and bar, which contained more comfortable seating.

There was also a small library. Every afternoon, the hotel holds a “wine hour” with a choice of red wine, white wine or apple juice from 5-7PM, which I thought was a really nice touch. More on that later. The library was a nice space to relax and featured things like a chessboard.

I also peeked up into the hotel’s “obeservatorium”, which contained a bunch of really cool lights that are supposed to be planet-themed. 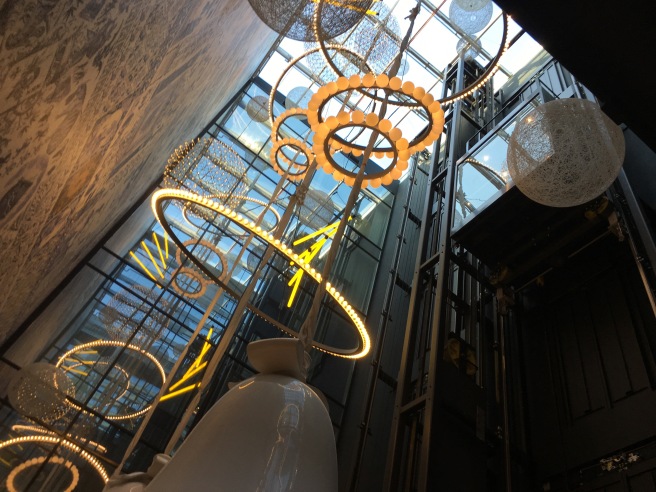 There was another seating area on the other side of the lobby, which featured some communal seating, and looked like a decent place to get some work done.

As I explored the lobby, an associate came over and asked us what we wanted to drink. I ordered an apple juice, which was served chilled an in a fancy glass bottle. The juice was incredible. 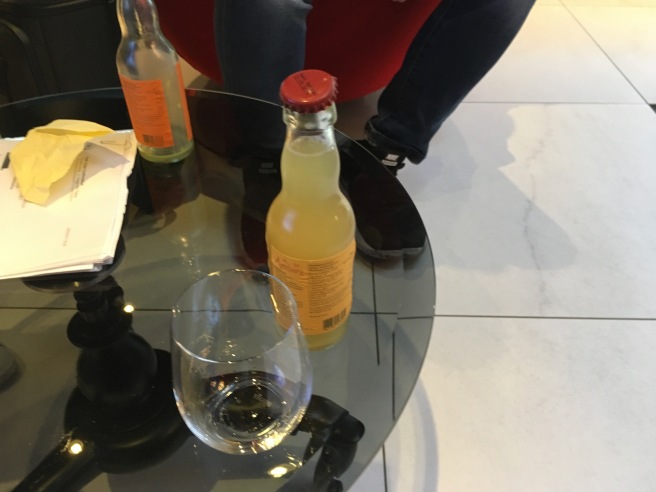 Eventually, another associate came over and started the check-in process with the tablet. Since we had booked with Citibank again, we received one night for free, along with Visa Premium benefits which included:

Although we were technically eligible for an upgrade, the associate proactively informed us that the extra bed that we had requested would not fit in a suite, so we settled for our Garden View King Room.

Our check-in was quick and efficient. We were handed off to another associate after all formalities had been completed to escort us to the lift lobby. The associate gave us a brief overview of the hotel’s facilities. We passed by the hotel’s courtyard garden on our way to our room.

The hotel is split into two “wings”. The main building houses the restaurant, lobby bar, library and some rooms. The other building consists exclusively of rooms and a meeting space. There is no difference in the design style between the two buildings. There was also a covered underground walkway between the two buildings which featured the fitness center and the spa. 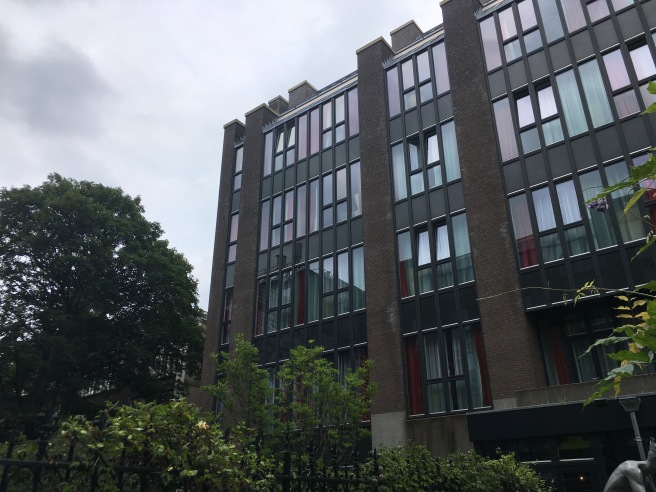 We were dropped off at the lift lobby. The lift, as was the case with literally everything at this hotel was a work of art, with a maritime-themed design.

We were assigned rooms on the third floor. There was a sculpt The floor number signs were also stunning. 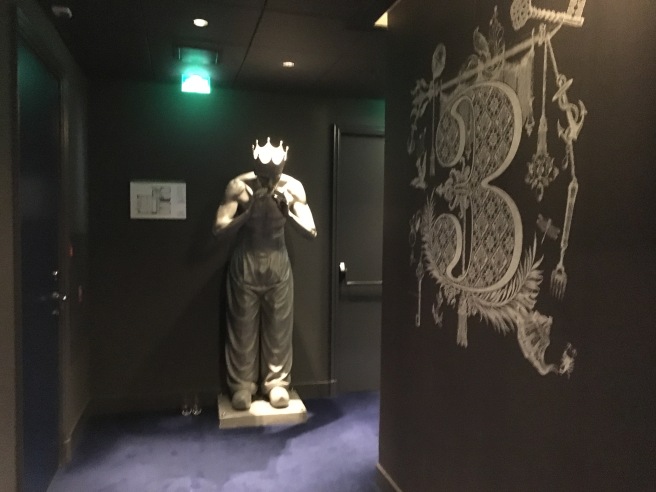 There were more television screens playing videos in the room. I liked how there were little descriptions next to each video as you’d expect in an art gallery.

The room was an average size. I was impressed at how clean and modern the room was, which was in stark contrast to some of the darker public areas in the hotel. There was an image of a fish stitched together with a glass cup which was… interesting? 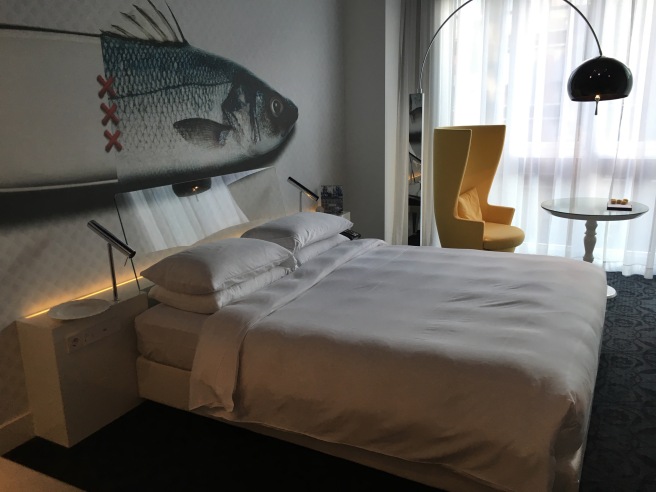 As you’ll notice in the image above, instead of a regular bedhead, the room featured a plastic curved bedhead. I don’t know what the intention behind this was, but it made lounging on the bed really uncomfortable. The bed itself was too firm but not actively uncomfortable. I also would have appreciated some extra bedside storage space.

We had requested a rollaway bed, which I found was more comfortable than the main bed.

The room featured two counters and a decently sized flatscreen television. I thought the books were a really classy touch that gave the room a bit of a homely feeling.

There was a large desk area along with a comfortable chair. The desk area featured more books, a speaker, lights and a telephone. I loved how the power ports were well placed and easy to reach. 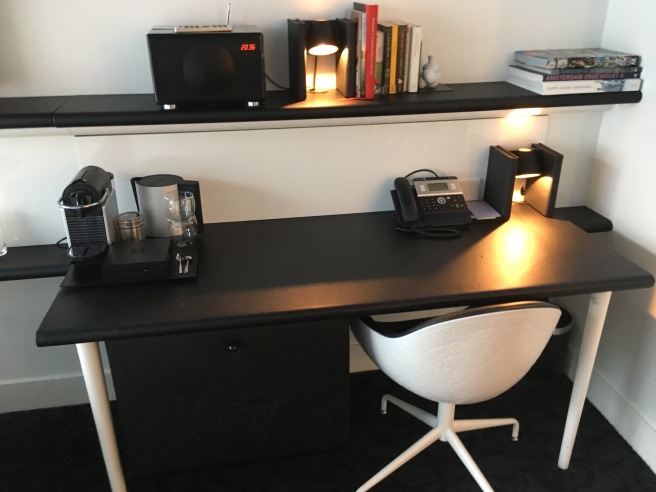 I appreciated that the hotel also offered a Nespresso coffee machine, some Nespresso pods (which we promptly “borrowed”) and a kettle.

There was also a minibar tucked under the desk. As is the case at all Andaz hotels worldwide, non-alcoholic drinks and snacks were complimentary.

There were two glass cups, presumably for drinking what was in the minibar.

The room also featured a comfortable yellow high backed chair which provided a much-needed pop of color to the room. There was also an oversized light hanging over the chair. While the chair was comfortable, I would have liked to see an ottoman to make the setup more comfortable for lounging.

There were also some macaroons waiting for us on the circular desk that complemented the colors of the chair, along with a note with basic information about the hotel. 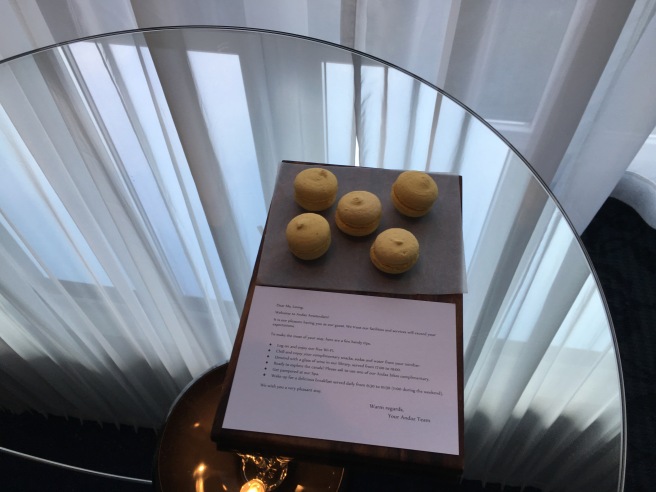 While I loved how bright the chair was, it was poorly maintained. There was a questionable stain on the chair, as well as visible dust and what looked like pen marks. 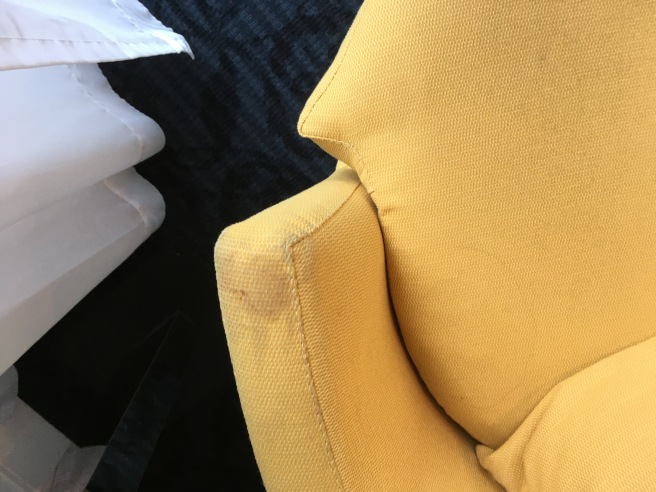 The room featured a view of the garden, which looked a little goofy.

In an homage to Dutch culture, the room also featured a pair of bright yellow and red clogs that added yet another splash of color to the room. I loved how the “opening” of the clogs were designed to look like open mouthes.

There was also a walk-in closet with a large baggage rack, clothes rack and a safe. This is also where the hotel stored bathrobes and slippers.

There was a separate toilet area, which again featured more Dutch/Amsterdam-inspired artwork. 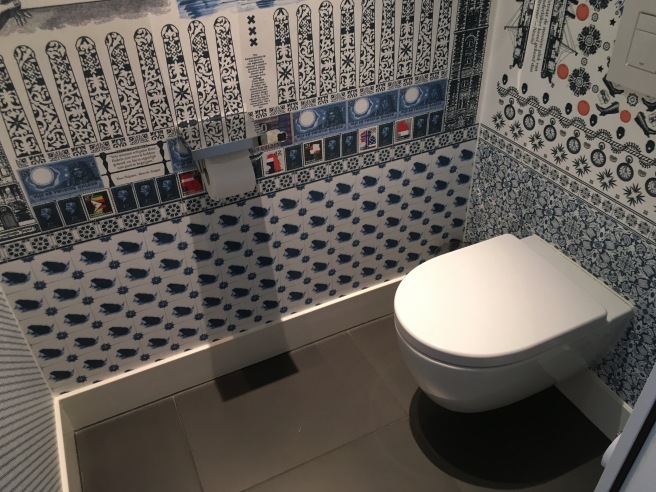 Now, on to my biggest gripe about the room. The bathroom was open-plan. While there was a curtain, it only covered one side of the bathroom area, meaning that it was completely exposed to the room. While I imagine solo travelers wouldn’t mind this, I was traveling with my parents and it was incredibly uncomfortable. When someone was showering, everyone else had to look away. This was a major disadvantage to the room for me. 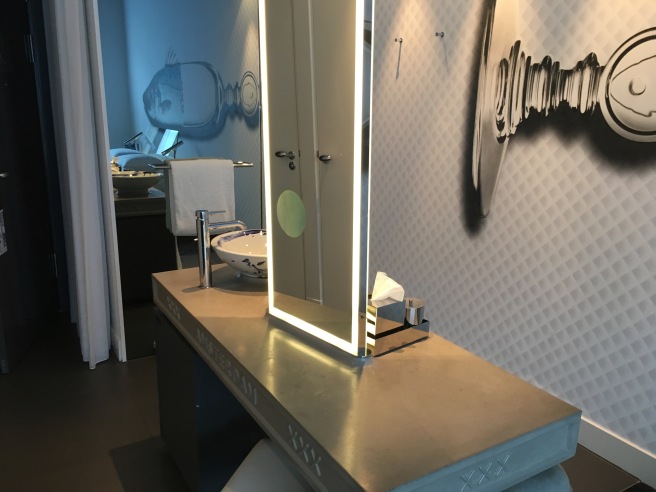 While the shower was surrounded by smoked glass, it wasn’t opaque enough, so you could still see inside the shower. Additionally, water would leak from the shower into the bathroom area, making it slippery.

The room had a ton of counter space, which I really appreciated. However, the mirror wasn’t off to the side of the sink and couldn’t be rotated. My mother reported difficulty washing her face with a cleaner, and my dad found it difficult to shave. There was also a stool underneath the counter, which was a nice touch that made wearing contact lenses or applying makeup easier. 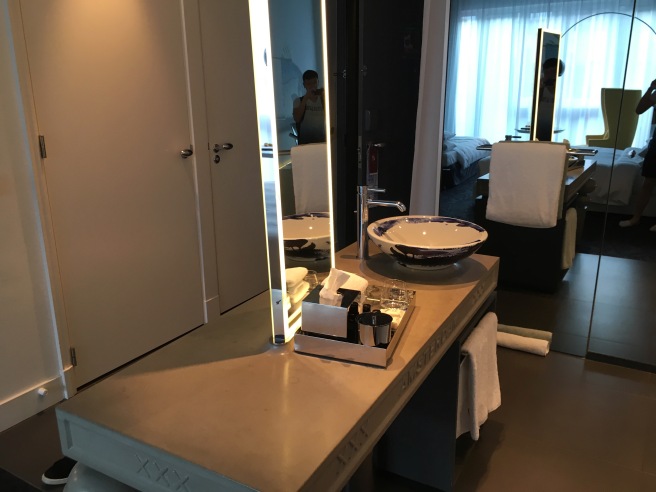 The toiletries were from the Dutch brand Zenology and were excellent. I particularly liked the massage shower bar. Under the hotel’s “Hyatt Has It” program, the hotel provides necessities like dental kits,  sewing kits, and loan out items like chargers, headphones and outlet adapters on request. 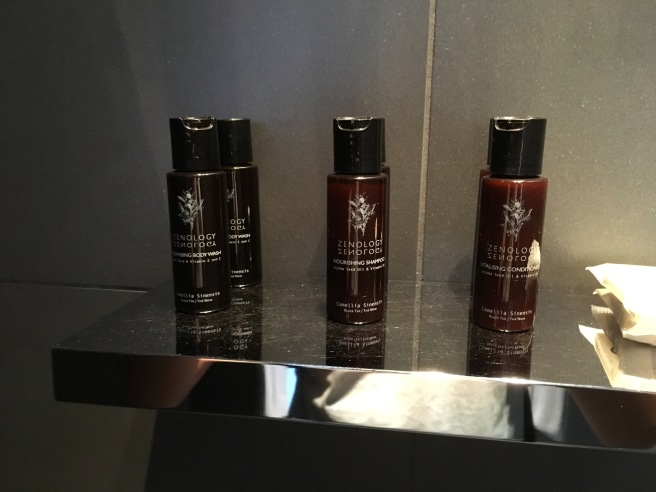 Overall, the room itself was quite decent. The design was clean, modern and classy while also reflecting the destination quite well. While the room itself was generally practically designed (i.e light switches and power ports were well located), I really disliked the setup of the bathroom. I hope the hotel considers replacing the curtains with ones that fully enclose the room, or refurbishes the room to include an actual wall separating the bathroom from the rest of the room.

I spent some time exploring the hotel and mostly just found more quirky art installations. The hotel also features a spa, fitness center and sauna and steam facilities, which I didn’t take advantage of during my stay.

Breakfast was served on each morning from 6:30AM to 10:30AM on weekdays and from 6:30AM to 11:00AM on weekends. Breakfast was included with our stay. There was a small continental buffet selection with pastries, fruit, yogurt, juice, as well as three random hot dishes. The buffet was always super busy, so I didn’t feel very comfortable taking any pictures.

There was also an a la carte menu to order off of. I ordered the eggs with shrimp for both of the mornings that I had breakfast, which was eggs-cellent. 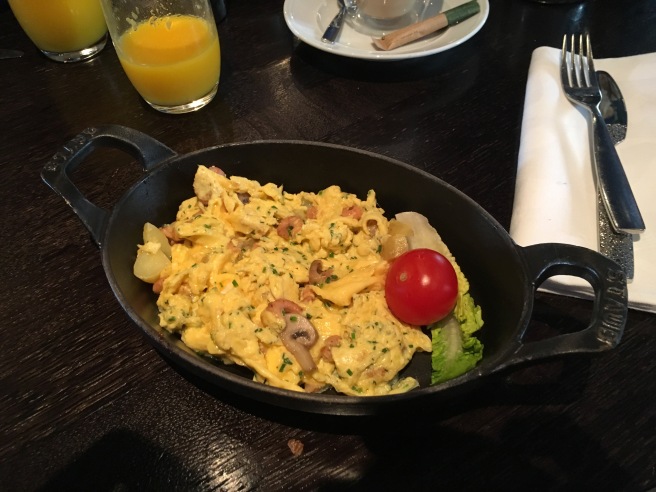 While the service at breakfast was friendly, it wasn’t very attentive due to the sheer volume of people at breakfast every day. There was a wait to get breakfast on one of the mornings, which wasn’t well managed. It took a while before we could flag down a member of staff who seated us.

As we left Amsterdam, we decided to have a bite to eat at the hotel’s lobby lounge before heading to the airport in order to use our 25USD food and beverage credit. We ordered a chicken panini which came with fries, and a traditional Dutch snack called bitterballen. Everything was incredibly tasty.

The service at the hotel as a whole was phenomenal. The hotel is very small at 122 rooms, so the service was genuine and personalized. The staff at the hotel come from all around the world and were all incredibly friendly. At breakfast, one of the servers started speaking Cantonese with us, which surprised us. Most staff members were really knowledgeable about the city and gave fantastic recommendations. Overall, this is the some of the best service I’ve ever received at a city hotel. The incredible staff at the hotel are what makes the hotel so special.

Check-out was swift and efficient, and we were on our way to Amsterdam Schiphol Airport in no time.

This was the best hotel that we stayed at on the entire trip. The hotel itself is stunning and modern, despite certain aspects of the room (*ahem* bathroom) clearly having been designed with form over function in mind. While it’s not very centrally located, it’s in a very nice area of the city and easily accessible. However, what made the stay stand out was the phenomenal service given by the staff members.

Despite the bamboozling bathroom bother, I’d definitely return to the Andaz.