So how did my experience on this flight differ from my outbound, in one of Hong Kong Airlines’ own longhaul A330s? Well, exactly as expected, actually; I’m not going to go as far to say that I prefer these seats over their longhaul seats, because I don’t – but these are some of the most comfortable angled flat seats that I’ve sat in. Here’s a brief first impressions post of how my experience went, and of course a full report will follow in the coming days.

Yup – while most airlines configure their regional business class with higher density seats to maximise profit, Hong Kong Airlines actually has less seats on their regional A330-300s than they do on their longhaul A330-300s.

Anyways, Hong Kong Airlines’ regional business class is configured in a 2-2-2 configuration. The seat itself is great as far as angled flat seats go – obviously the seats aren’t flat and you have a seatmate, though there’s a large privacy shield, and more than enough legroom.

While I originally selected a seat in the last row of the cabin, all but one of the seats in the bulkhead row was taken, so I decided to switch to one of the window bulkhead seats. The seat was infinitely more spacious, and I had tons of legroom – it also didn’t hurt that there wasn’t anyone next to me, so I basically had direct aisle access.

Be aware, though, that while all other seats have two storage “lockers” for small items (they fit most of my GoPro equipment, as well as my phone and glasses), the bulkhead seats don’t really have any storage space at all, which is something that you should take into consideration when selecting your seat, especially if you value storage.

This isn’t specific to Hong Kong Airlines’ regional business class, as I’d get the same meal regardless of which business class product I was sat in.

The appetiser was rather bland.

The main course packed a punch in flavour. 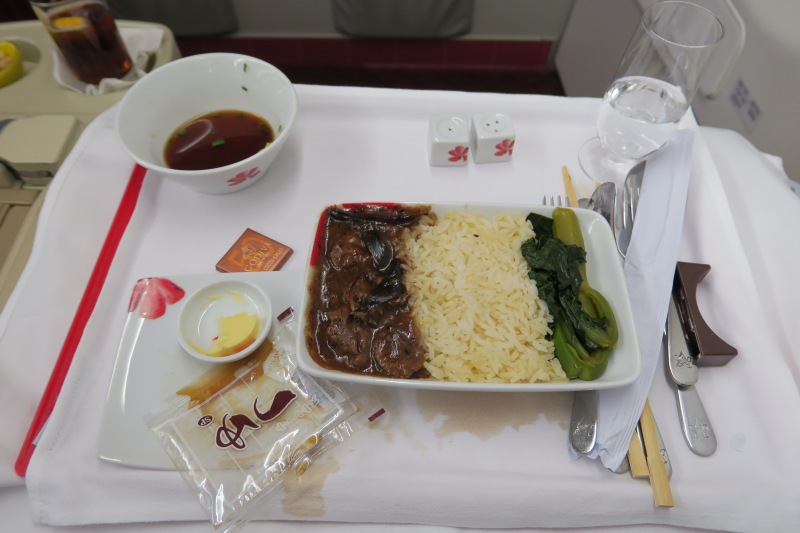 The dessert was perfectly fine.

All in all I was impressed by the pace of service – the entire meal service took 35 minutes, from the serving of the appetiser to the clearing of the dessert. However, it was a light load in business class today, so I can’t exactly give the crew full credit.

Once again, yuan yang and lemon tea were provided on this flight, a feature of Hong Kong Airlines that I really like.

This is where Hong Kong Airlines deserves a lot of credit – they offer the same quality of amenities on longhaul flights as they do on regional flights. While I never used the duvet, I appreciated that it was there; and the pillow was just as plush as it was on the outbound. The headphones were also the same headphones provided. I wasn’t provided slippers on this flight – the only deviation I noticed on this flight from the outbound.

I won’t go ahead to talk about the service on this flight – I’ll save that for the actual report. It was good, and in quite a few ways better than the service that we got on the outbound.

But what strikes me is how much better this product is than Cathay Pacific’s regional business class. There’s so much extra thought that Singapore Airlines put into this product when they first installed it on their planes. There’s a large privacy shield, the seat’s comfortable in lazy-Z and flatbed mode, more components of the seat are adjustable, and the amenities are far superior. Admittedly Hong Kong Airlines isn’t responsible for how well-placed everything is (apart from the amenities), as they acquired the plane directly from Singapore Airlines. But this post is about the product, and not the airline.

So overall, Cathay Pacific’s longhaul seat and food are superior, and some of their upgraded amenities are superior, such as their headphones (which are better than Hong Kong Airlines’). However, Hong Kong Airlines has a (much) better shorthaul seat, superior signature beverages, and more product consistency across longhaul and shorthaul flights. Also, while I’d try to pick a flight with their longhaul seat, I wouldn’t go out of my way to avoid this regional configuration, as I would with Cathay Pacific.