I try to stick to my travels by reviewing airlines, airport lounges and hotels on this site, but sometimes I can’t help but share the amazing experiences that I’ve had as a result of my travels. Imperial College was one of these times. I’ve met so many people that I can refer to in the future, and can look forward to seeing again should I earn myself a place at Imperial College in a couple of years. However, this is my travel blog, not my personal portfolio, so I won’t dwell on it.

However, I figured I’d share a bit of how it’s like to stay at an Imperial College dormitory, at least from my experience. I know that Imperial College rents out their dorms as hotels during summer time (July 3 to September 24 as of this year), so I figured I’d go ahead and share what the dorms are like. If you’re looking forward to your first year as an undergraduate at Imperial, this post is also for you.

Our dorm was located at Prince’s Gardens, one of Imperial College’s newest halls. Prince’s Gardens was great for a stroll in the morning and occasional games, though I wouldn’t see huge value in staying here if I was alone. 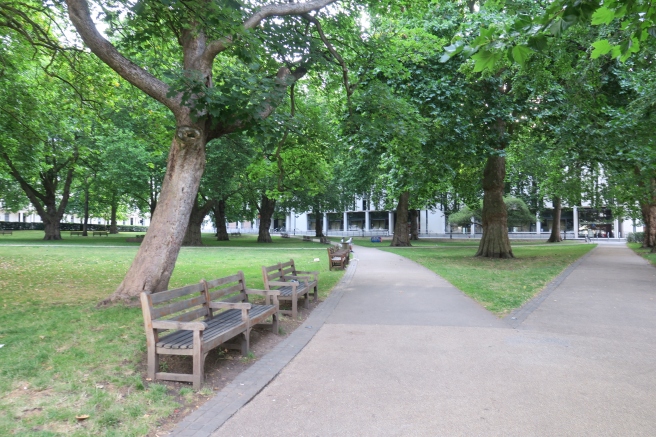 As you’d expect, there’s parking outside some of the dorms, as some people own houses integrated into the Prince’s Gardens complex.

We were assigned a room in Falmouth Hall, which I believe is Prince’s Gardens’ main hall, as that’s where the reception is located. The adjacent hall is called Tizard Hall, and there are four more halls – Linstead, Gabor and two more I can’t quite recall. 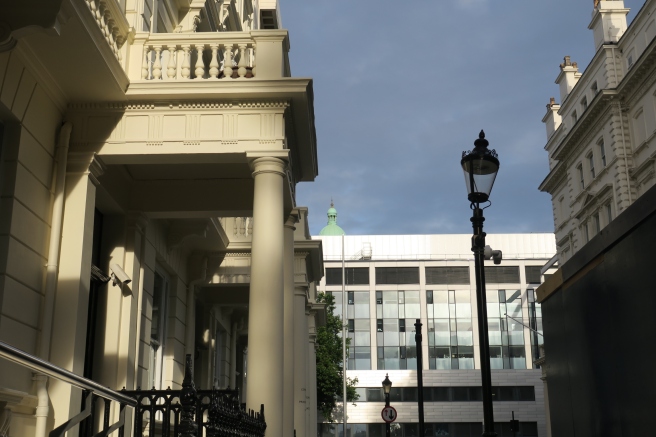 The reception is like any other hotel reception – it features a bit of seating, a main desk, as well as areas to store luggage. If your room runs out of water, the reception is also your best bet, as there’s a water cooler behind the desk. 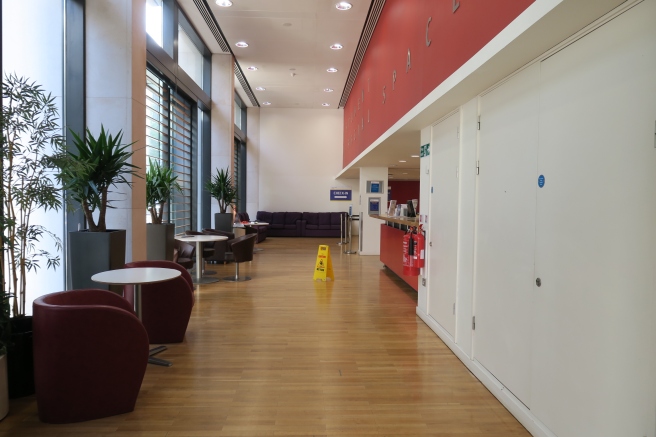 I was assigned a room on the lower ground floor. At Falmouth Hall, the hallway “tapers” down on one end, and there are rooms on the other end as well. Each hall is structured differently, though I’m sure the rooms are similar.

Our room was located right not far from the bottom of the stairs – I mainly used stairs to get to and from my room, though if you’re carrying something heavy there’s a single lift you can use.

At Falmouth Hall (and I believe at most of the twin rooms at Prince’s Gardens), each twin room features two beds facing each other, as well as two desks. There isn’t any air conditioning, though there are two fans provided in each twin room.

I found the beds comfortable, though I was probably just way too exhausted for my own good every night.

As you can see from the below picture, the room was actually a good size – probably just a bit more than what you’d expect at a college dorm.

The two desks were positioned together, and mirrored each other.

Each desk featured a fan, a lamp, a phone, and an office chair, as you’d expect at a student dormitory. The chair was great for working, though I was exhausted every night.

I wasn’t expecting tea and coffee to be free, though I believe it was. Water wasn’t replenished after we drank all of it the first day, however. 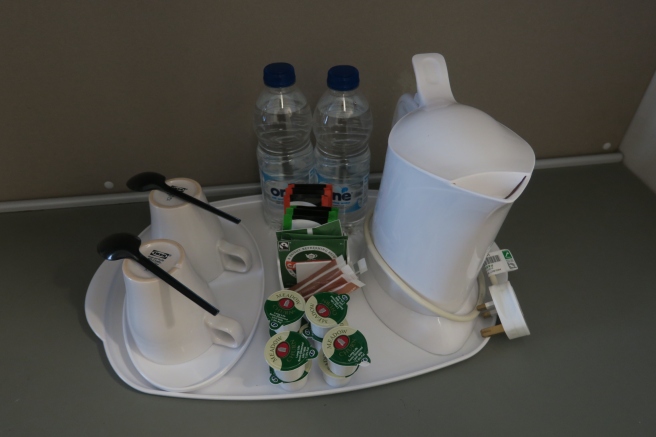 There were shelves above the desks. Presumably a college student would store books, though I used the shelves to place clothes that I would be using again (e.g. gym clothes). 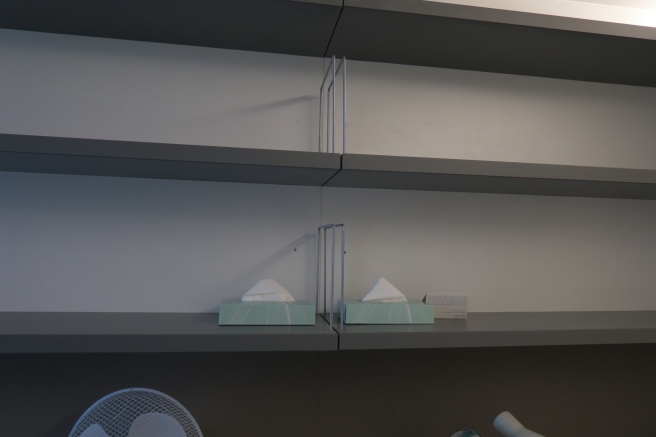 There’s a lot of space to put your stuff in this room – there were lots of cupboards.

Our room directly faced a back walkway. I never saw anyone using the back walkway, though I was barely in my room outside of curfew, and I kept the curtains closed otherwise.

The bathroom wasn’t much different from what you’d see in a lower-class hotel room. It featured a sink, a walk-in shower, and a toilet.

The shower was much better than I was expecting, though water still leaked out of the shower and into the bathroom.

There were also a few cubbies in the bathroom.

The college actually provides soap and toiletries. While I used the soap, I had brought my own toiletries so didn’t have the need for that during my stay. 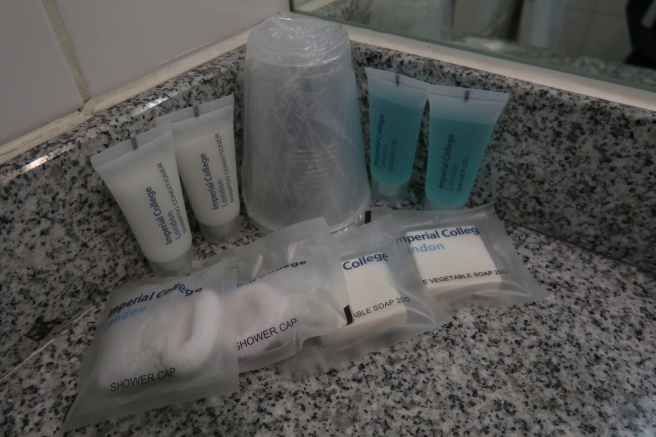 The rooms also feature decent WiFi, and they’re also serviced, which is great. Overall I was pleasantly surprised by these college dorm rooms. No, I wouldn’t return on a family holiday, though I’d have no qualms with staying here for a year during university (apparently they kick you out after that).

A lot of my friends stayed in single rooms, and my friend Kin invited me into his room for a look. They’re basically a twin room cut in half, so they have all the amenities you’d expect to receive in a twin room. 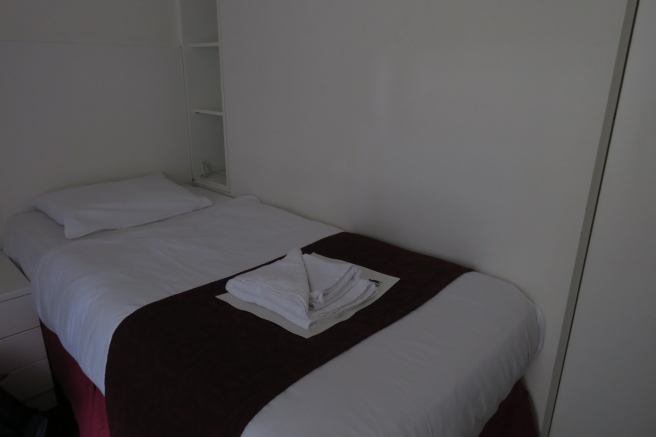 Breakfast was served at the cafeteria for us, which wasn’t great, though I’m sure there are better options nearby. If you’re just there to stay the nights, there’s a gym complex, a common room near Gabor Hall in terms of things to do.

Overall I had such a great time and I have great memories of this place, though as a travel blogger and reviewer I need to review this as a bed and breakfast. I’d stay if the price is right – you get a garden to hang out in, the facilities are decent, it’s a quiet space, and it’s in the middle of South Kensington, where you can walk to Hyde Park in five minutes.

However, unless I was a university student at Imperial College, I probably wouldn’t return – not because the place isn’t pleasant, but because the memories would be too bittersweet to handle.