Since Cathay Pacific introduced the A350 into their fleet in mid-2016, their A350 routemap has been growing at a really fast rate. I had the chance to fly the A350 in business class from Taipei to Hong Kong last year, and thought the hard product excelled. It’s a step up from their 777 and A330 business class product, and is currently my favourite business class hard product in the world, though admittedly my sample size is limited. 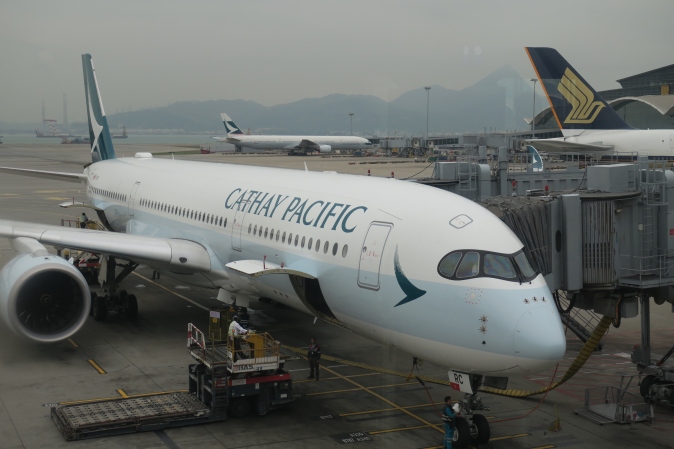 I’ve also heard great things about their premium economy and economy product, which I will be seeking opportunities to try in the near future.

Cathay Pacific has currently been flying their A350 to several destinations in Europe, though the only destination that they’ve been flying the A350 to in North America as of now is Vancouver. Fortunately that’s about to change, as Cathay Pacific seems to have loaded their A350 into the schedule for flights between Hong Kong and Newark as of October 29th, 2017. The route is currently operated by a Boeing 777, so most upgrades to the cabin product are rather minor.

The routes affected are:

Jason frequents the Hong Kong to Newark route, so he’s currently really excited about the changes, and will be able to give us full reviews of Cathay Pacific’s A350 business, premium economy and economy products.

Their economy class product seems comfortable, and luckily Cathay’s A350 economy seats aren’t being subjected to 3-4-3 treatment, which means that this route will soon be one of the most comfortable ways to get from Hong Kong to the U.S. in economy (as United, American and Cathay Pacific all operate 777-300ERs between Hong Kong and the U.S., and all of them will eventually have 3-4-3 configurations).

The best improvement is probably that Cathay Pacific’s A350s feature WiFi, and it’s also charged by time instead of by data usage. Cathay Pacific typically charges US$19.95 for WiFi on flights longer than six hours, which is a great way to maximise productivity, especially on a 16-hour flight. It’s worth noting that this will be Cathay Pacific’s longest A350 route, which makes WiFi especially useful.

Hopefully I get to try this route soon, and for now I’m excited that Jason gets to fly between Hong Kong and Newark multiple times on the A350.

One thought on “Cathay Pacific Will Fly A350s To Newark”