A couple of days ago, I flew from Newark to Hong Kong in Cathay’s Economy Class. Given that we haven’t reviewed much of Cathay’s long-haul Economy product, I thought I’d do a quick review here.

Cathay Pacific operates out of Terminal B at Newark Airport, which is also used by Virgin Atlantic, British Airways, Air India, La Compagnie and SAS. Check-in counters open 4.5 hours prior to departure – although I’ve found that they will typically open up a couple of counters before check-in officially opens to accommodate early arriving passengers.

As a Marco Polo Silver member, I was allowed to use the Business Class counters. There was no line for all classes when I checked in – although that may have just been because I arrived 3.5 hours prior to departure. The agent who checked me in was friendly sent me on my way in a few minutes.

Cathay Pacific uses the British Airways Galleries Lounge in Newark, which I won’t be reviewing again as not much has changed about the lounge since my last visit. For anyone that’s interested, here’s a link to my review of the lounge. 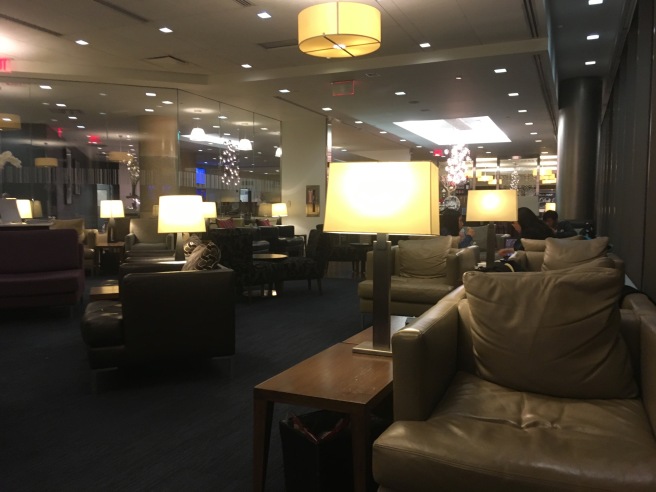 Boarding began right as the clock struck 12:30, which was the published boarding time. Cathay uses two gates to board the flight. The lines were clearly marked and the process was very orderly.

This flight was operated by a 77G – which is Cathay’s code for a Boeing 777-300ER without First Class. On the 77G, there are three Economy cabins – one smaller cabin in front of the third exit door and two bigger cabins behind the third exit door. I selected seat 39A – which was a bulkhead seat in the forward cabin.

Although the seat is a few years old, it remains an industry leading hard product. What makes this seat special is that it has a dedicated layer of padding – making it especially comfortable for long-haul treks. The seat also has a small storage nook underneath the television on non-bulkhead seats – which is a handy space to store loose items. You’ll also find a USB charging port as well as a universal charging port.

Each seat has around 32 inches of pitch (which is the distance between one seat-back to another) as well as 18.5 inches of seat width – statistically making the seat one of the most spacious in the industry. The seat also offers up to 6 inches of recline in a cradle position – which means that the seat pan articulates forwards to minimize the effect of sitting behind a reclining passenger. 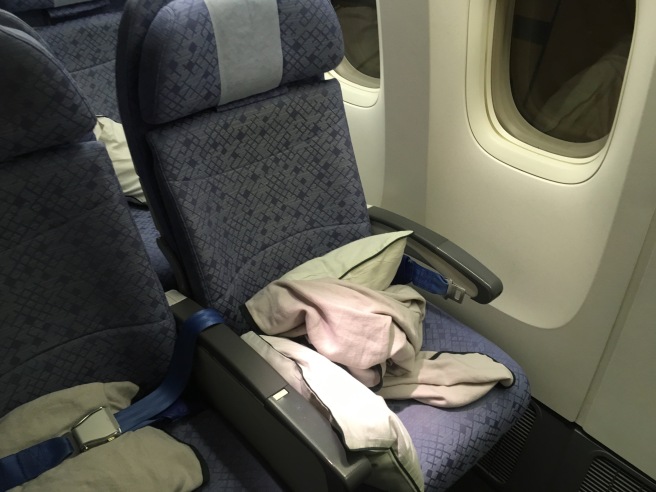 Each seat was stocked with one pillow and one blanket. Although pillow was a little flimsy – it was perfectly acceptable for Economy. The blanket was light, soft, and very warm – making it easy to snuggle up and get comfy. Each passenger is also given a pair of crappy over-ear headphones that sucked. The sound quality was truly terrible and they hurt like hell. Worst of all, the headphones have a tendency to “trap” hair, meaning that passengers would have to painfully “release” their hair from the headphones.

I was seated in a bulkhead seat – which had a little more space than the average Economy passenger. The seat that I was sitting in was also happened to be a bassinet seat, which I pulled down to use as a leg-rest.

The flight was delayed by a passenger who didn’t show up for the flight. Interestingly, in an effort to find her, the Inflight Services Manager made an announcement in Tagalog in order to reach the passenger – which I thought was a smart move.

After the whole fiasco, the safety video was played – which most passengers snoozed through.

As the boarding doors were closed, menus were distributed by the cabin crew – which I’m surprised to see that management hasn’t cut yet.

Afterwards, the cabin crew conducted their pre-takeoff checks. I wasn’t exactly impressed by how the crew members missed a pair of loose shoes on the bulkhead floor. The shoes could have acted as an obstruction to an emergency evacuation. Not cool.

The lights were then dimmed in preparation for take-off. 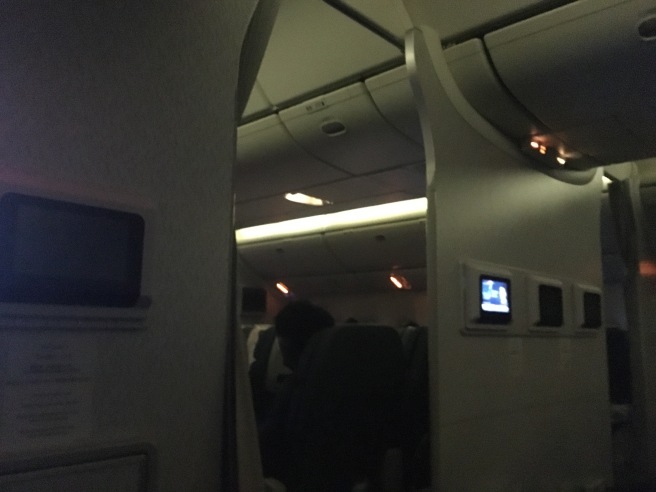 I slept throughout the takeoff and woke up just as the cabin lights were turned all the way up for supper service. I d0nt understand why Cathay is seemingly obsessed with waking people up to eat food. Most people were so groggy and tired that they just ended up trying to sleep with the cabin lights all the way up.

The meal service started with the flight attendants going through the cabin and passing out Antiseptic Towelettes to passengers.

The cabin crew then came around the cabin with a cart offering passengers a choice between fish with rice, beef with potatoes or pasta. I ordered the fish along with a Coke. The meal was served with a lukewarm roll and a tomato and bocconcini salad, as well as a bottle of water. 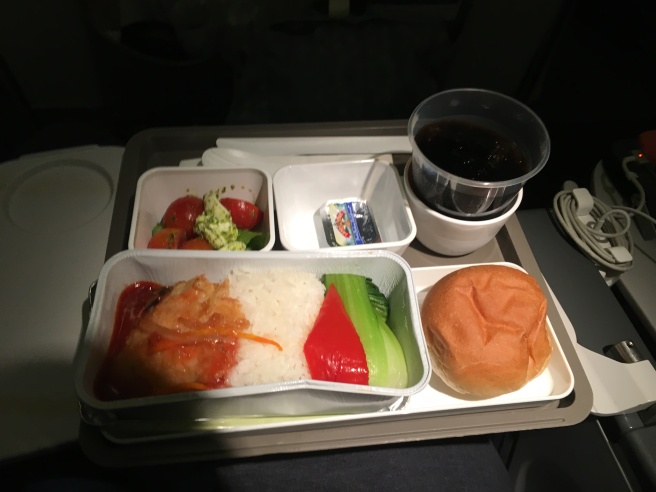 The salad was uninspiring but edible. The cherry tomatoes were anything but ripe. Meanwhile, the main meal was great. The rice was fluffy and perfectly cooked, the fish was well seasoned, and the sauce that drowned the fish was flavorful. The vegetables were incredibly crispy and flavourful. Overall, another solid showing from Cathay Pacific Catering.

A Haagen-Dazs ice cream bar was served after the meal was finished, which tasty but incredibly hard.

I slept for a solid 8 hours after the meal service. I was a little hungry when I woke up, so I ordered a cup of noodles. Unfortunately, the cabin crew completely forgot to prepare the noodles for me – which I don’t blame the crew given that most passengers were up and hungry at that point in the flight. When I informed the crew, they were beyond apologetic and immediately prepared a cup for me, so I’m definitely not complaining.

After another couple of sleep, breakfast was served 2 hours prior to our arrival in Hong Kong. The service started with a drinks run which I didn’t get a picture of.  Shortly after that, the crew came around the cabin with a cart offering a choice between a frittata and beef congee. I chose the frittata, which was served along with a mini blueberry muffin, some fruit, a bottle of water and a tub of strawberry yogurt.

While the fruit wasn’t very fresh, the yoghurt, along with the muffin were both fantastic. The main, however, was revolting. The frittata was rubbery, while the hash brown was soggy. The tomato looked like it had been shot and dragged over an assortment of rough terrain, while the bacon was oiler than the whole of Saudi Arabia.

The rest of the flight was uneventful, and we landed ahead of schedule.

Overall, Cathay Pacific’s Economy Class product met my expectations in the sense that it wasn’t out-of-this-world fantastic, but comfortable enough for an ultra-long-haul flight.

The hard product was great as always. We have historically ranked Cathay Pacific’s Economy Class hard product as one of the best in the world, and will continue to do so in the foreseeable future. The seat is spacious, padded well, and offers a variety of storage and charging options.

However, I wasn’t impressed by the soft product. While some of the food served on this flight was fine, there were other dishes that were vile. Cathay cut amenity kits eight years ago and they don’t show any sign of returning – instead relying on an unpublished “on demand” system for amenities such as eyeshades and socks. The headphones provided were probably the worse headphones on the face of the earth. As for the service…while I was really impressed by some of the crew members, the other half of the crew made me want to check my boarding pass to make sure I was on the right flight.

So. While Cathay’s Economy is perfectly fine, management needs to make changes to the soft product, and NOT make changes to the hard product if they’re looking at offering an industry leading product. Too bad that’s not the direction that they’re moving in…