After a ride from the W Taipei straight to the airport, we arrived at Taipei Taoyuan Airport at around 2:30 PM, ready for our flight at 4:20 PM. I didn’t think there were any lounges worth visiting for any longer than needed – while I really like the Cathay Pacific Lounge Taipei and consider it to be one of the world’s best outstation lounges, it isn’t hard to get tired of the lack of runway views there after some point. 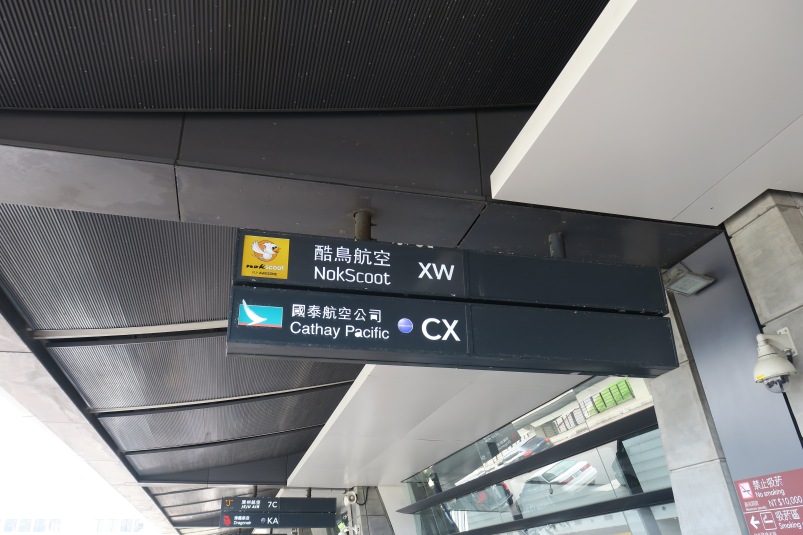 I quickly made it into the immigration area, which was lightning quick compared to the last time I was there, but still not very quick. Taipei has a really clustered immigration process, as they horribly underestimated the amount of people going through when they first built the facility. 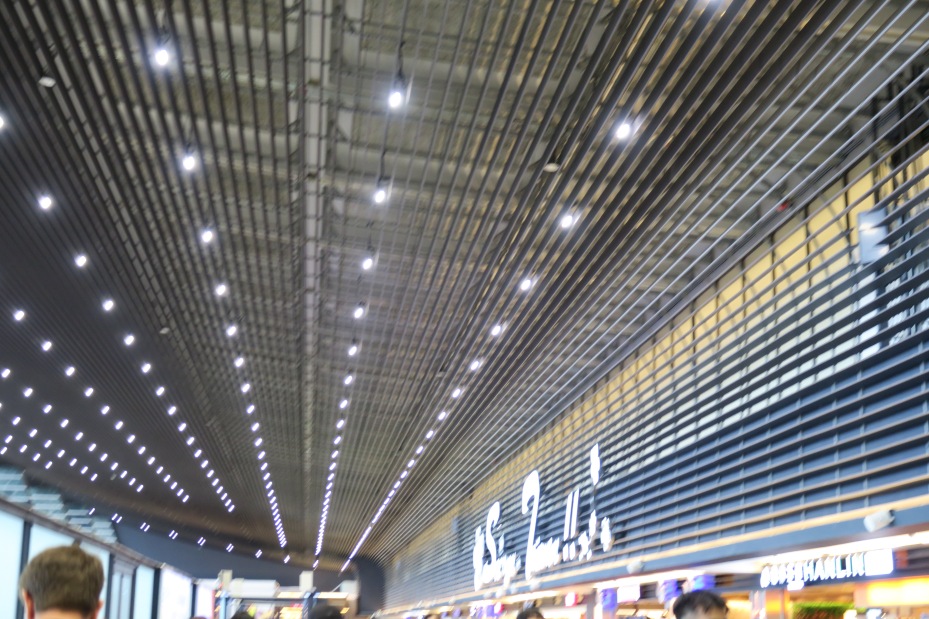 I quickly made my way to the Cathay Pacific Lounge Taipei, which, as I said above, is perfectly nice. I won’t be reviewing it again, though, as I had last time, and I don’t think there’s any extra value I can add.

Shortly before departure I walked along the lounge area to see what else was on offer, and walked past the Plaza Premium lounge. To my surprise there was one area that was completely open to the public, and didn’t look like it had any sort of checking. 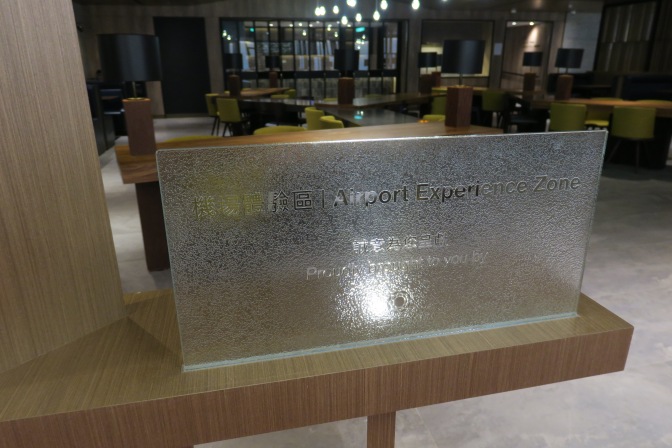 The space was pretty open, so I suspected it wasn’t under any sort of entry requirements, and made my way inside to have a look. 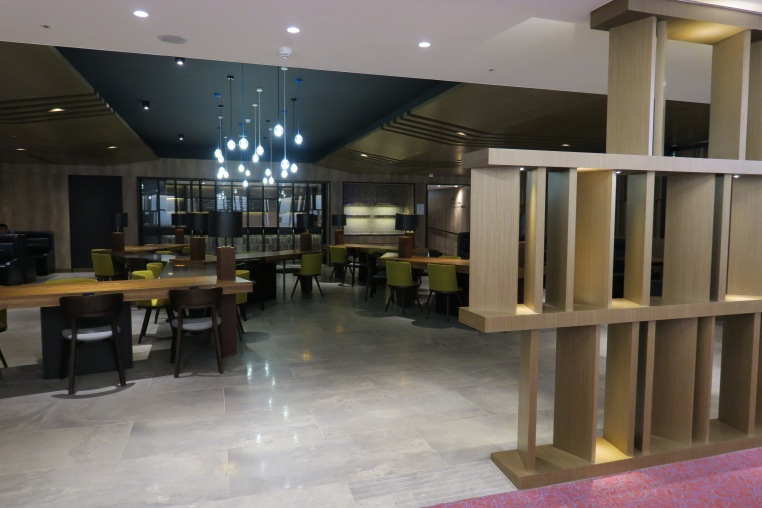 The zone was separated into two areas, with a partition in between. One thing that struck was how gorgeous the area was. 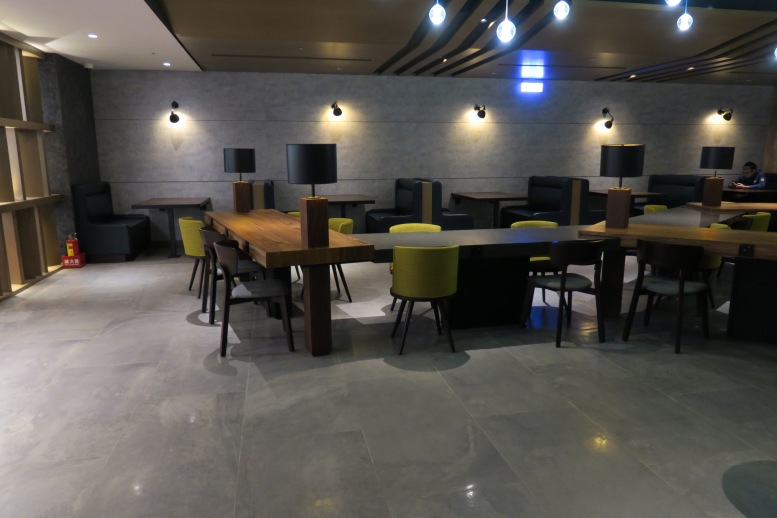 I can’t even explain how much thought was put into the area, and I’m definitely expecting that the lounge itself was much nicer. The airport experience zone had chairs for working, lots of universal power ports and some tables for talking. 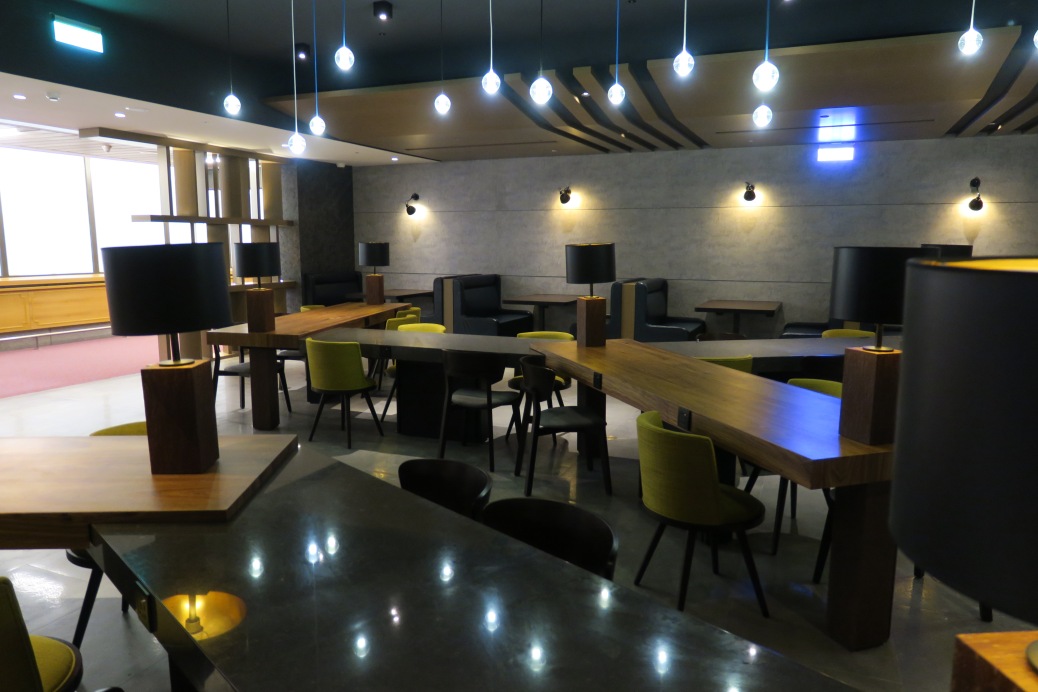 Near both the lounge partition and the side wall were some tables. They would be pretty great if there was food, though obviously there wasn’t (though presumably you could bring food up from some kiosk down below). 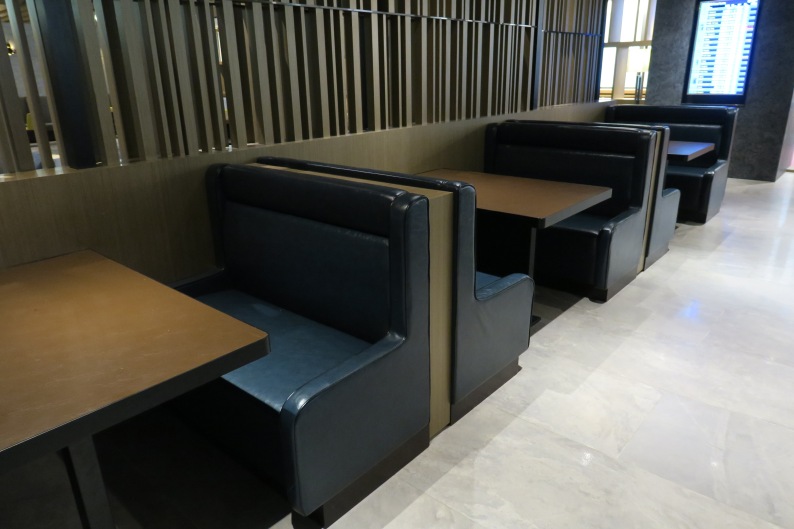 The meeting tables were just gorgeous, and the green seats provided a needed splash of colour. It was hands down the most gorgeous lounge, let alone airport zone, I’d been to. 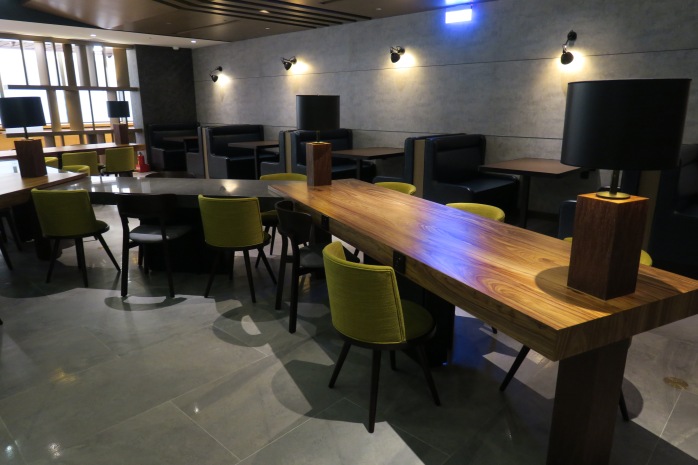 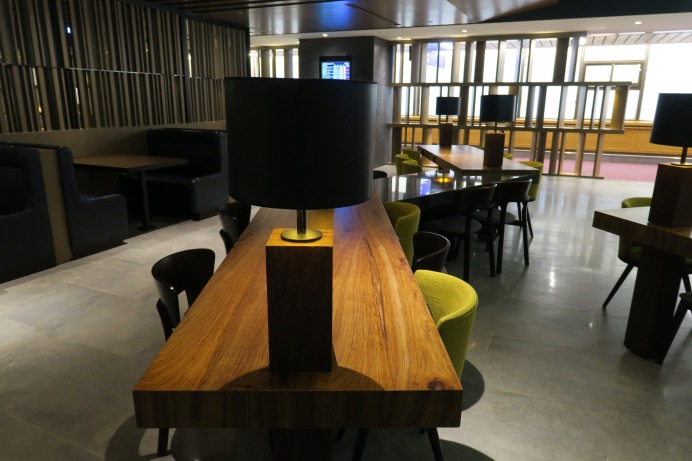 There was a hallway that led to a bathroom and some showers, though the showers were locked. Presumably you have to pay for them, since life can’t be that perfect. 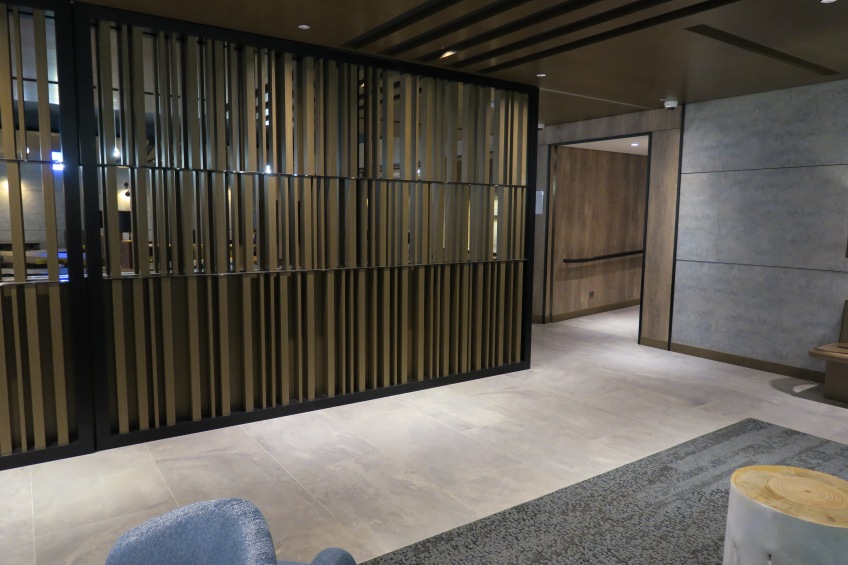 On the other side of the zone were some interesting sofas which seemed rather comfy located in the center of the area, and some benches by the side. There were a couple of people here, though that was all I saw. The finishes carried on to this part of the lounge. It clearly wasn’t intended to maximise capacity, but rather to create a sense of spaciousness. 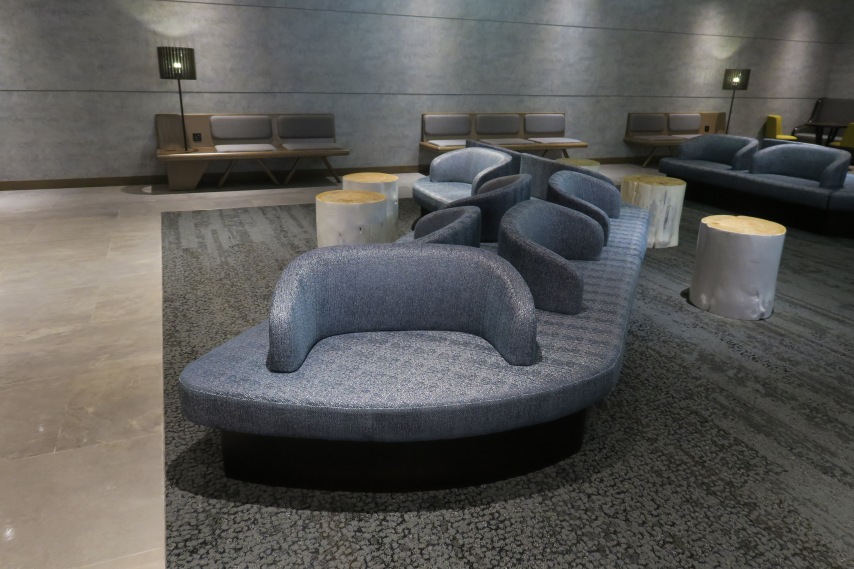 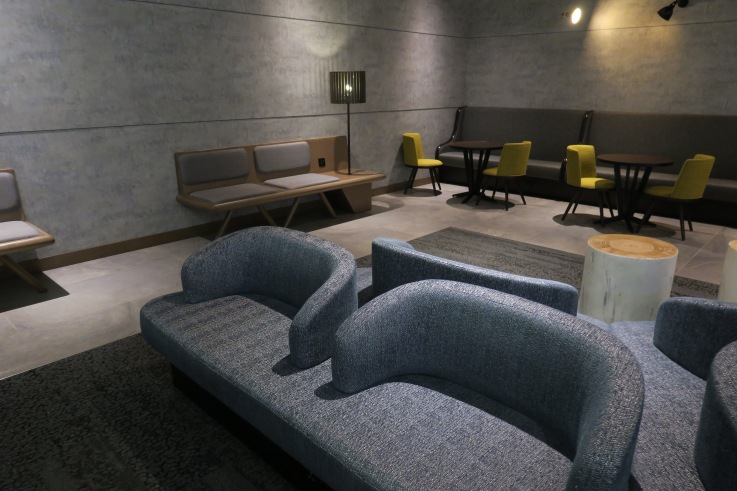 If I didn’t have access to any business class lounges, I would’ve imagined how good of a place this was to work – it even was equipped with a universal power port. Ultimately benches aren’t my favourite style of seating, but for working, they’re pretty nice. 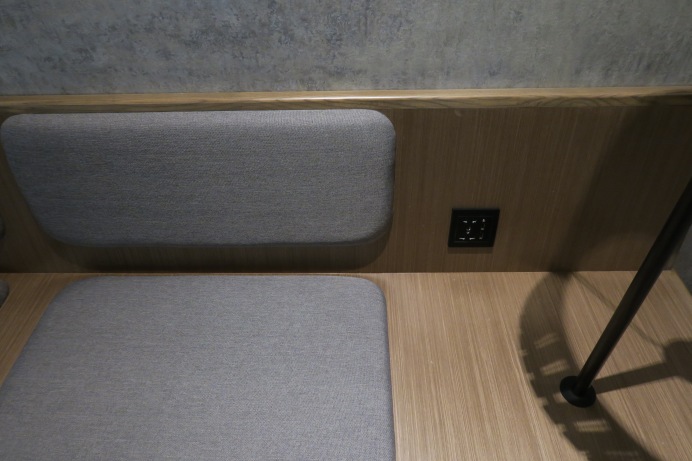 There were also USB ports, in case you needed them. 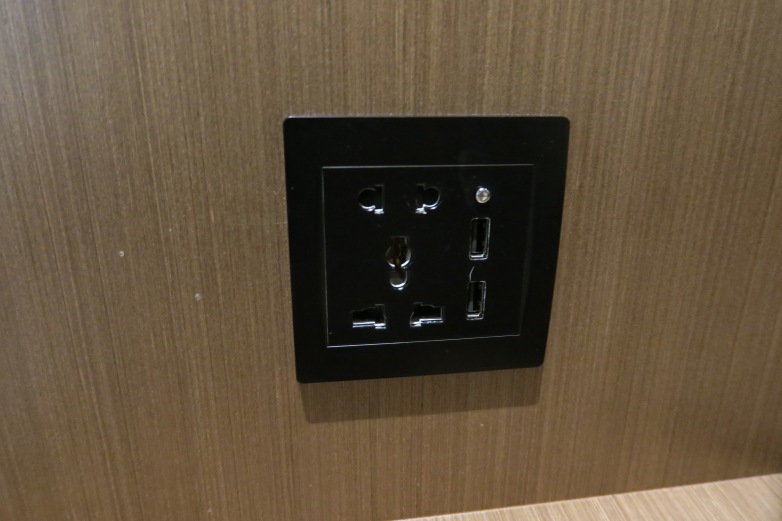 At the far end of this area was a large communal table where you could host a meeting, as well as a departures board. Note that the little tables look like little tree stumps, which added to the modern feel of the lounge. 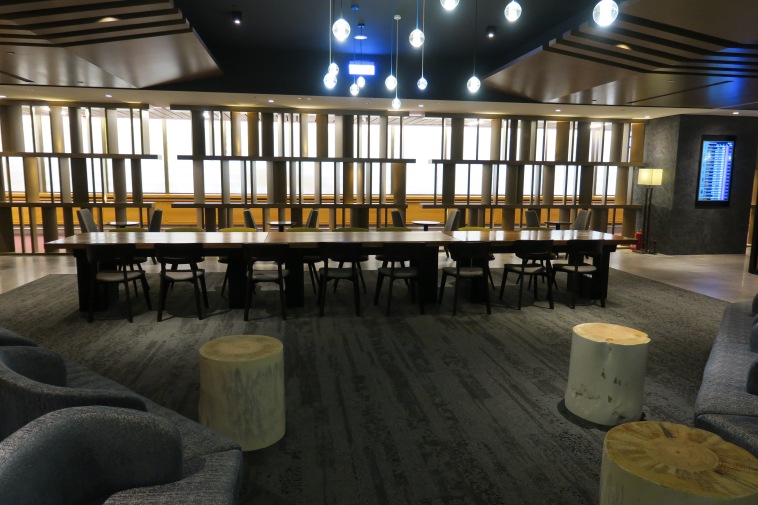 Unfortunately, I didn’t have much time to spend here. I didn’t have a look at the WiFi situation, though I’m assuming the zone has free WiFi – if not, the airport WiFi isn’t terribly slow (it is considerably slower than most other Asian airports, though the speed isn’t terrible).

I feel like this is a smart concept for Plaza Premium – it’s essentially advertising for their brand name, without anything overly exuberant/extravagant. I’m actually not too sure if there really are no entry requirements, so if I’m flying economy out of Taipei, I’ll be sure to hang around in that area, as it’s infinitely more pleasant than the rest of the terminal. It also makes me curious how the “main” Plaza Premium lounge is, given how nice they can make a space that isn’t even designed only for their cardholders/eligible guests.

Would I stay here over a “real” business class lounge? I don’t think so. I think that added space, extra food, and service is technically better than purely a luxuriated zone that I believe is intended for all passengers travelling through the airport.

I also appreciated how empty the space was, given that no one really knows about the experience zone yet. However, I’m guessing if you guys make it to this review and are Taipei regulars, that’ll change over time.