It’s been a while since we’ve reviewed Cathay Pacific’s Premium Economy, so I decided to stop procrastinating and start adding to the reviews on this blog. I’ve been having a blast studying in New Jersey. However, it’s been a busy few weeks, so I’m sorry my contribution has been rather limited these days.

We arrived at JFK’s Terminal 7, which is where most United and oneworld flights depart. The Cathay Pacific check-in counters were on the far right of the terminal, where we were checked in by a lady who seemed to be pissed at the whole world (Donald Trump wasn’t elected yet at the time, so she really has no excuse). 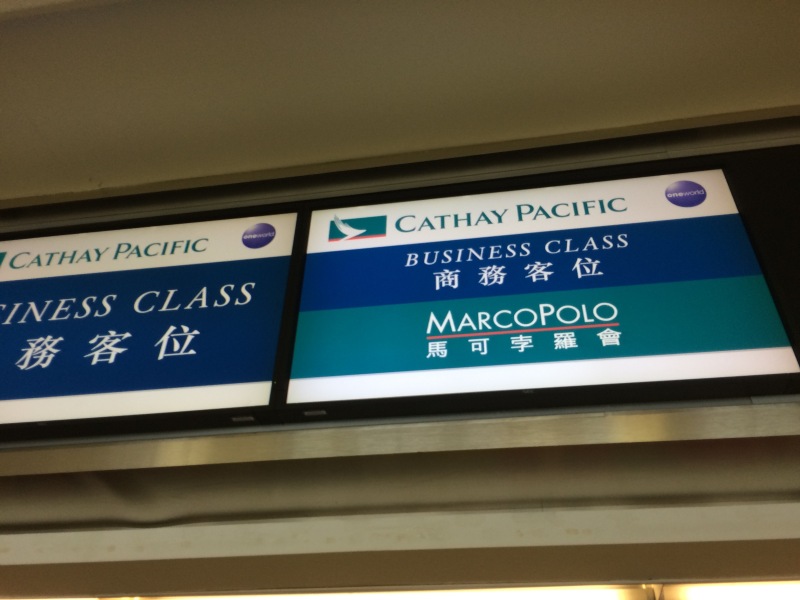 We then headed to the TSA checkpoint, which was a complete mess. The agents seemed to be doing everything in their power to make the experience as stressful and confusing as possible to a group of confused elderly Chinese tourists who didn’t really understand any of the “officers” instructions. Instead of properly explaining the screening procedures, the TSA workers simply yelled at people when they got things wrong. What follows is an interaction with a staffer (it’s not word for word, but you get the idea…):

Jeez. I just asked you a question. I even put on my “I’m sorry that I exist” voice! What more do you want from me? Interestingly, after passing through the nude-o-scope, I met Noel, who was possibly the nicest TSA agent ever. She probably rivalled Finnair crews in friendliness. Wow!

Eventually, I made it to the Galleries Business lounge, operated by British Airways, which was a bit of a dump. There was a non-existent food selection of stale sandwiches and instant noodles, while the place was decorated like a doctor’s waiting room straight out of the 80’s. Unfortunately, my discreet picture taking skills are still kind of shabby, so I’ll leave the review to Alvin when he finally decides to come to the U.S.. 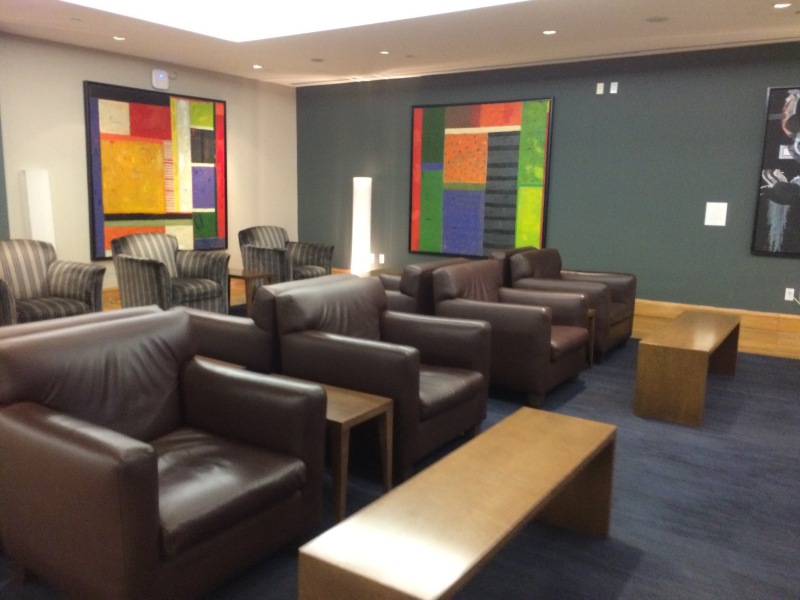 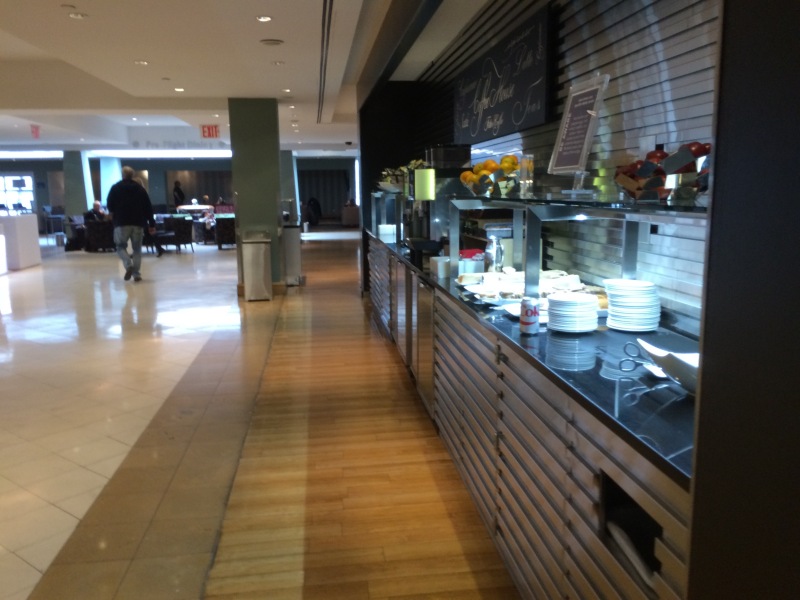 Eventually, we made it to the boarding gate, which was a total mess. There were hoards of people trying to board the plane which was only made worse when people didn’t actually board with their group. I found it interesting that Economy and Premium Economy were boarded in the same line, which certainly isn’t how they do things at any other Cathay destination that I’ve flown to. So much for that “priority boarding” thing that Cathay touts about its Premium Economy product. (I believe this has been changed and Premium Economy passengers now receive their own line). 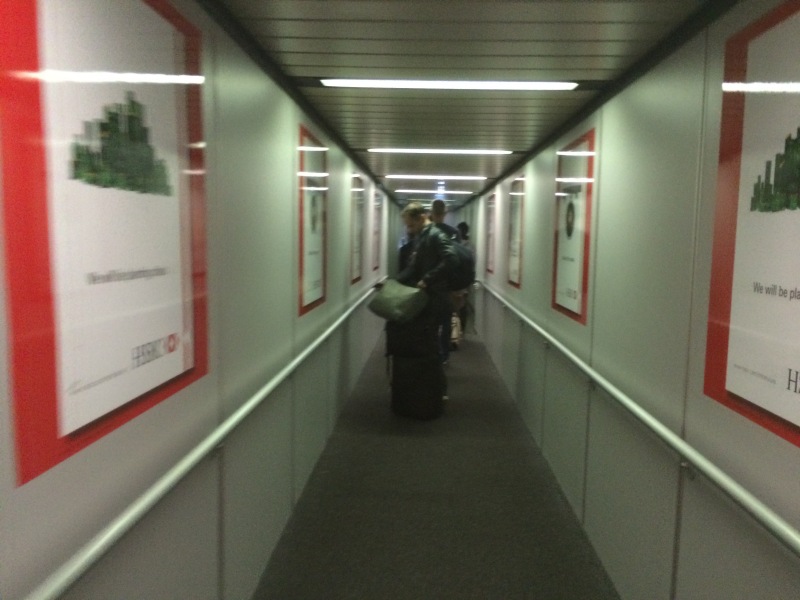 I was greeted by the exceptionally friendly Senior Purser and was directed towards my seat. I managed to get a really blurry shot of the Business Class cabin on my way to my seat. 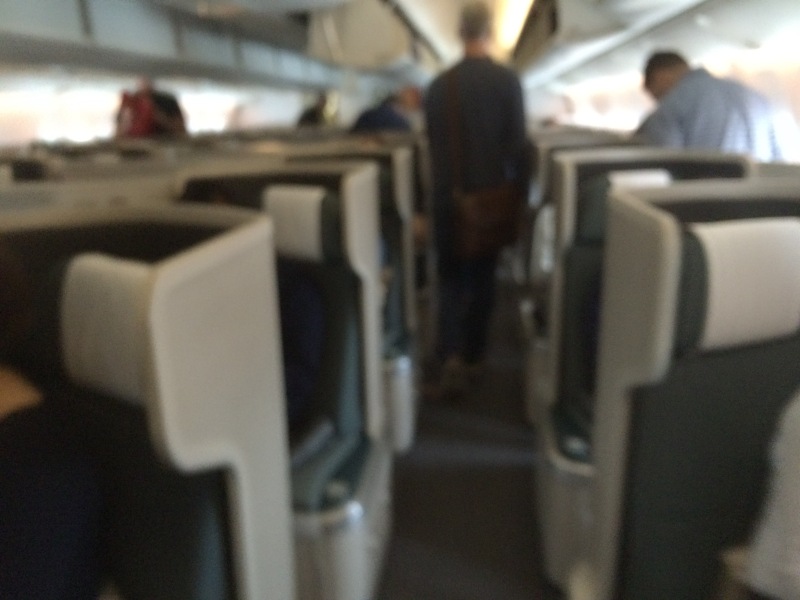 I eventually made it to my seat, which I took another blurry picture of. A Business Class standard pillow and a regional Business Class blanket was provided to each passenger. The blanket is supposed to be more “premium” and of a softer weave when compared to the stripper stockings that Cathay gives out in Economy. That has since been replaced with a lightweight duvet.

Editor note: the below photos of premium economy were updated from a more recent trip report 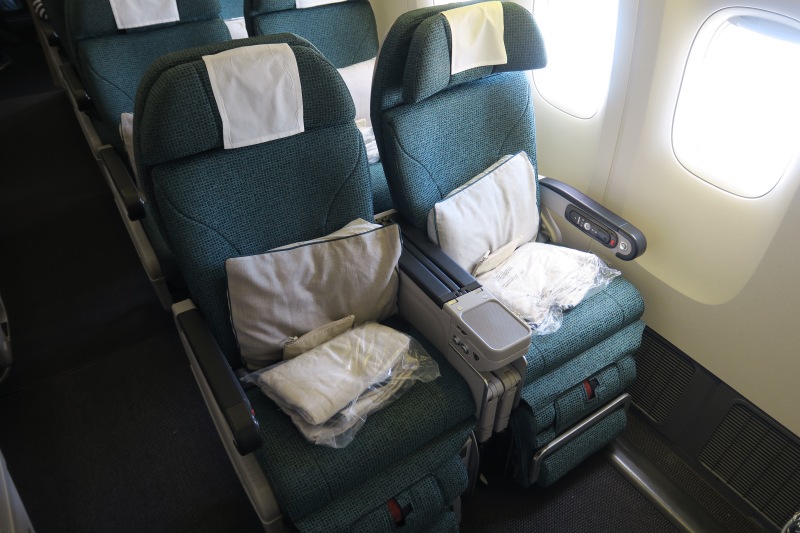 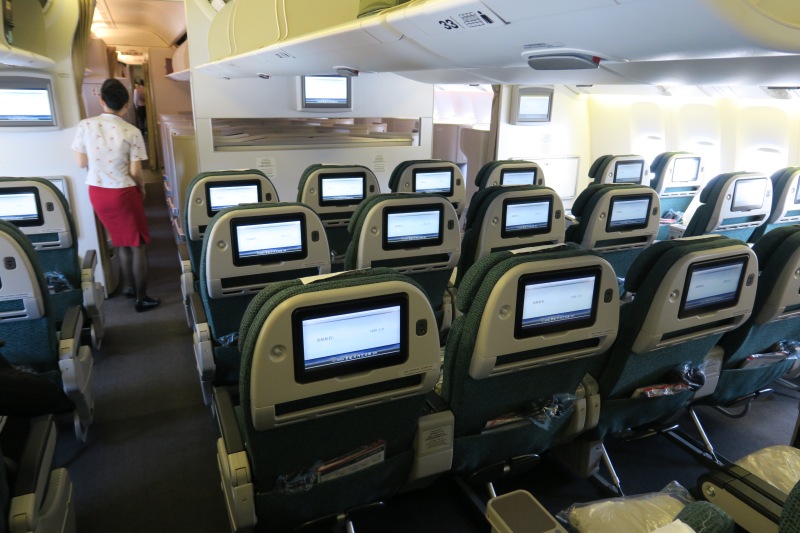 At each seat, there’s a 10-inch monitor. I found it interesting that Cathay has two variations of the entertainment screen in it’s Premium Economy cabins. More specifically, on newer aircraft, the personal television is outfitted with a newer touchscreen which is much more responsive and easy to operate. This aircraft wasn’t one of them. The older touchscreen system isn’t great, but it’s perfectly adequate.

There’s also a small “nook” where you can place your stuff throughout the flight. As simple as it may appear to be, it’s quite possibly the best thing that has come out of Cathay Pacific’s product team. I’m happy to see that this nook has been updated and enhanced on Cathay’s newest A350. 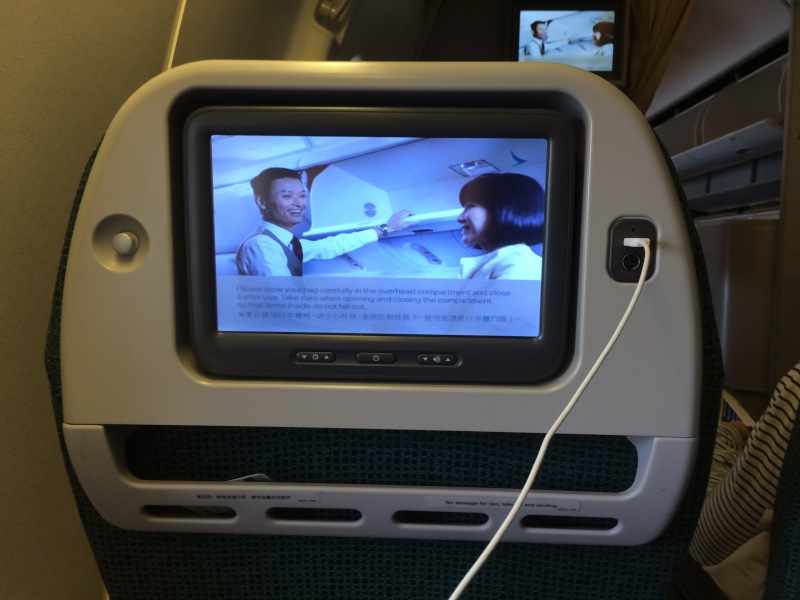 There’s also a decent amount of legroom in the seat. It was a good 38 inches which is more than enough space to stretch out and is much more comfortable than your run of the mill Economy seat. There’s also a footrest, which I find is more annoying than functional. It’s not padded, making it uncomfortable to plant your feet on. I’m happy to see that Cathay has ditched these for a more conventional swing up leg rest on their latest A350s. However, we’re stuck with these for now…

Cathay also provides an amenity kit and noise cancelling headphones to Premium Economy passengers. The kit is designed by Goods of Desire and is quite snazzy. Although it contains the basics, I think they could make it more “premium” by shoving some cheap moisturiser in there. The headphones were identical to the headphones in business class. 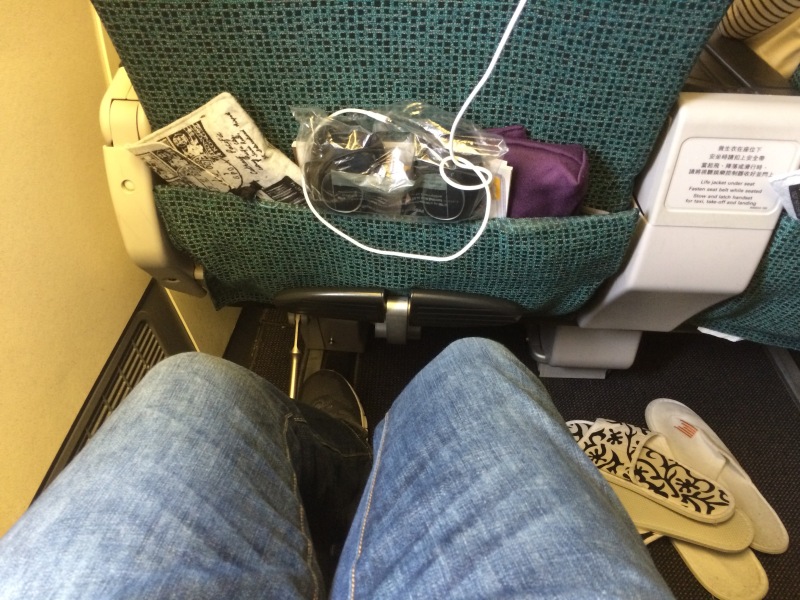 The flight attendants then came down the aisle with welcome drinks and hot towels. I selected an orange juice, which was sour as could be. My mother had champagne, which she said was quite nice. I find it funny that Cathay’s Premium Economy welcome drinks are actually a larger portion that their Business Class welcome drink.

Menus were also distributed on the ground. Interestingly, the flight attendants handed out menus to each “group” of travellers, rather than giving each passenger one. Hmm…are they skimping on menus in order to cut costs…? 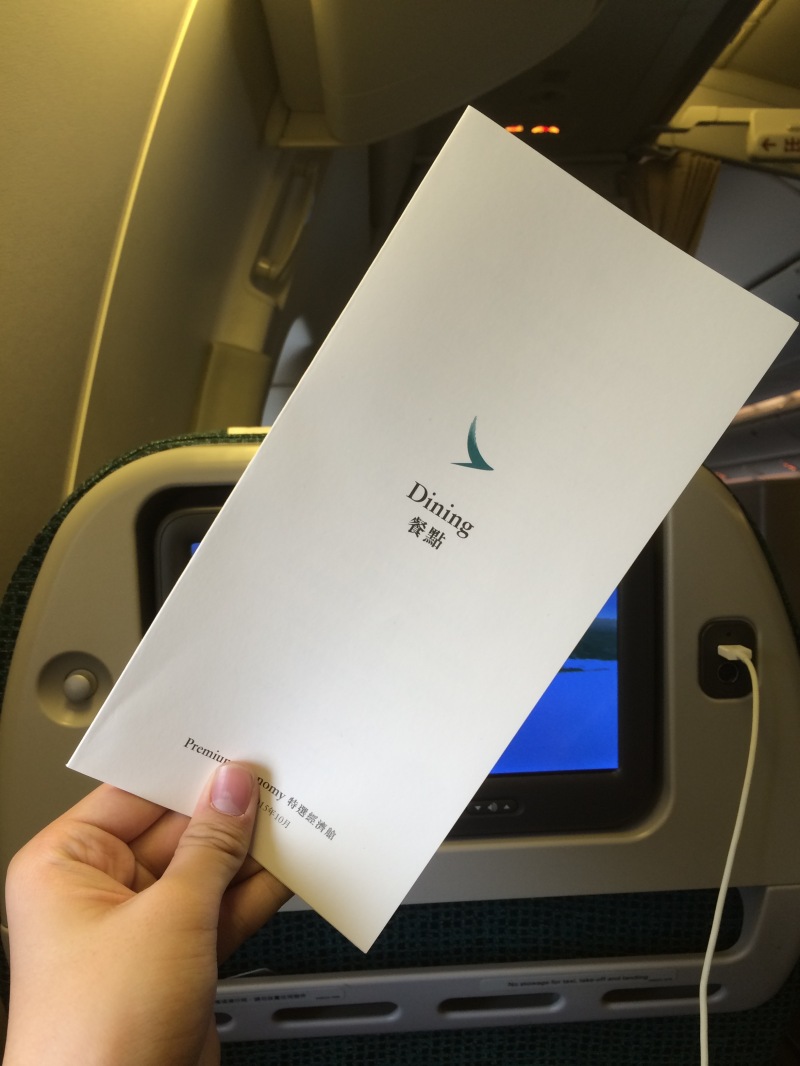 At this point, we began our taxi to the runway, during which we passed an interesting variety of traffic. 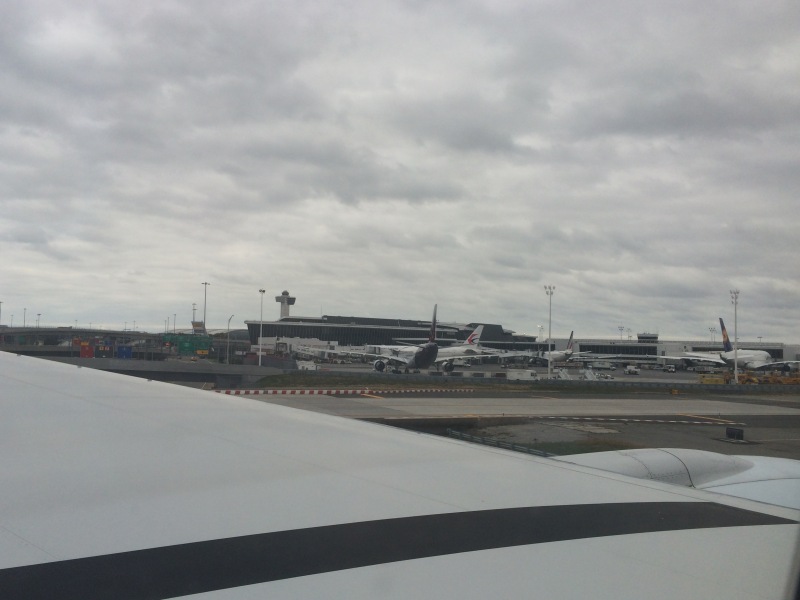 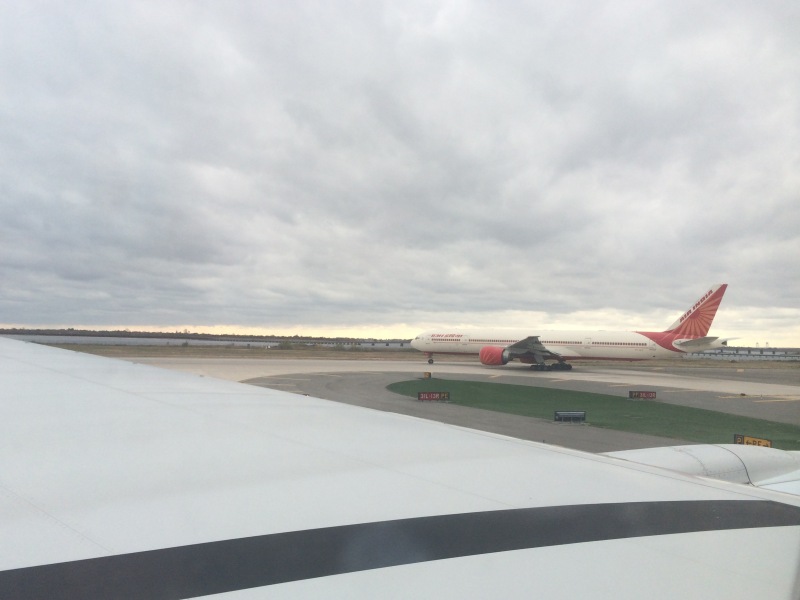 Eventually, we began our takeoff roll which was a little bumpy. 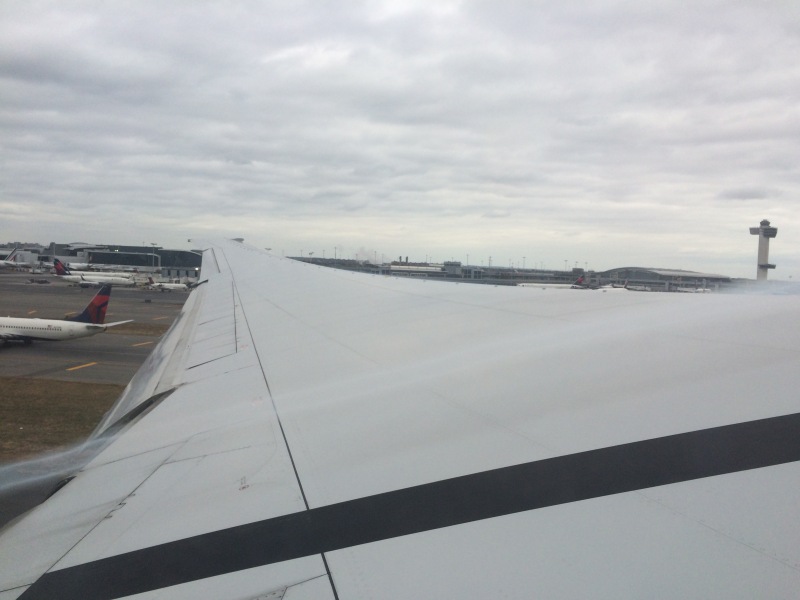 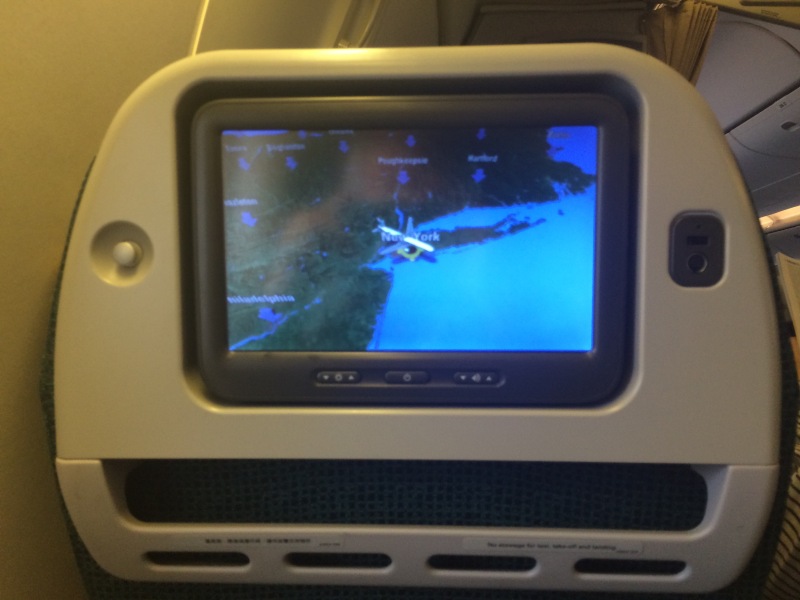 Shortly after the seatbelt sign, the Inflight Services Manager sent a message to all Marco Polo members travelling aboard the flight, which I thought was a really cute touch. While I didn’t get one, my mum did, which made her feel extra special. The in-flight service started with the distribution of water bottles. However, unlike in Business Class, only one water bottle is catered for each passenger, which is a shame. 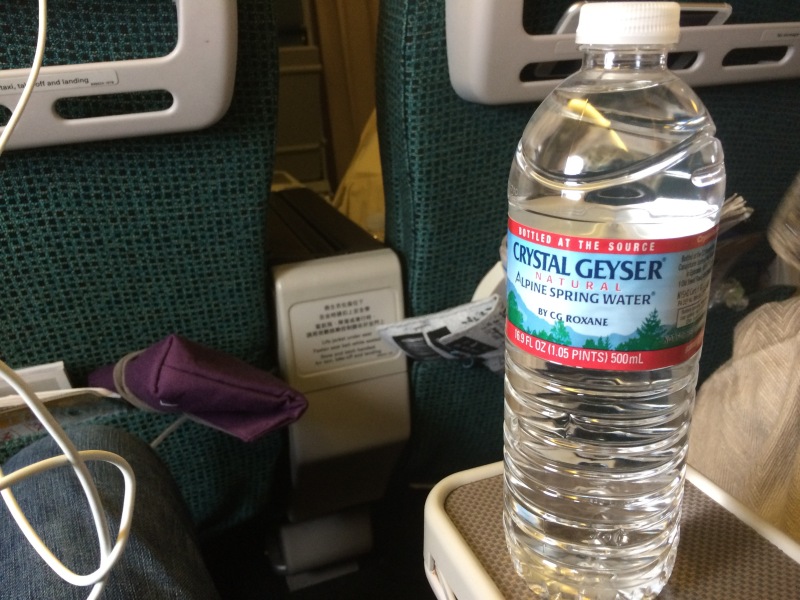 Shortly after that, the flight attendants came around the cabin offering drinks and nuts from a cart. I had a coke, which was served with a tonne of ice. Interesting, the cup they served the drinks with were of a different material that was much more flexible. 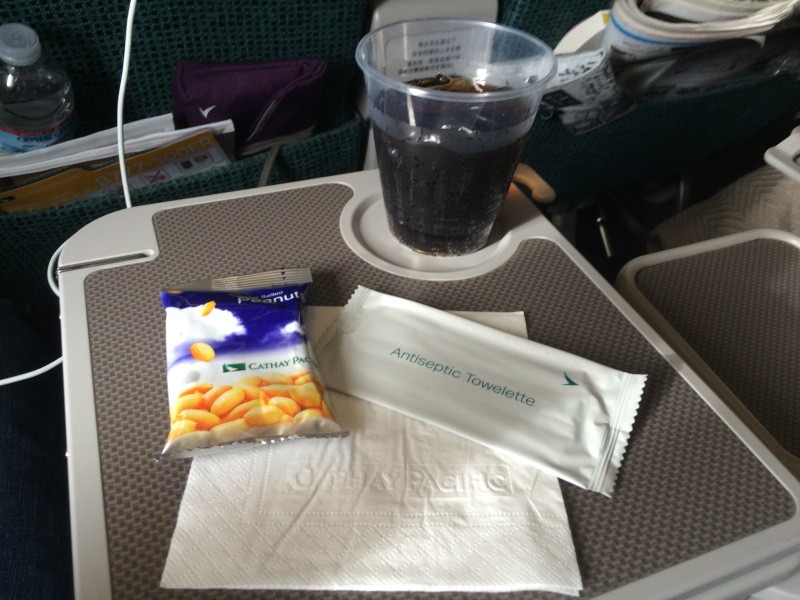 After a short wait, the main meal cart was then brought out. I picked the stir fried pork, which was also offered in Business Class. The pork came with a salmon and potato salad, as well as a warmed brown bun. 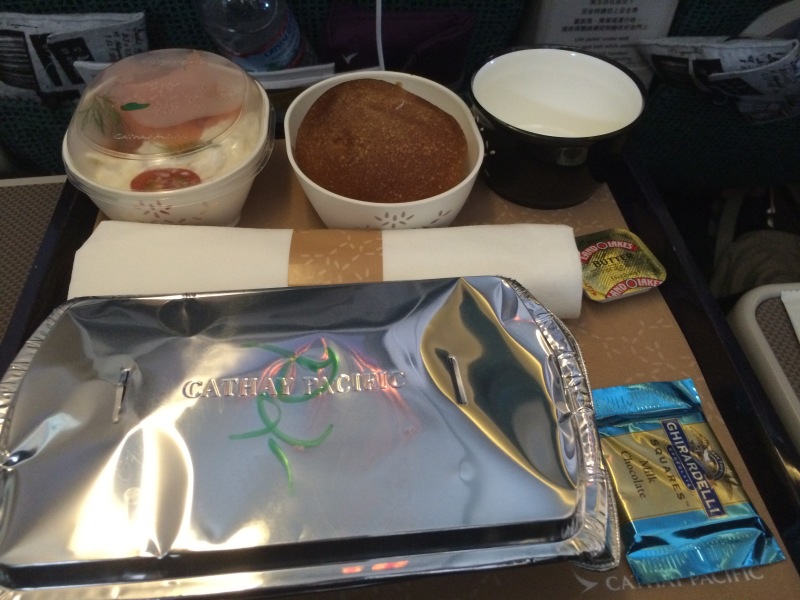 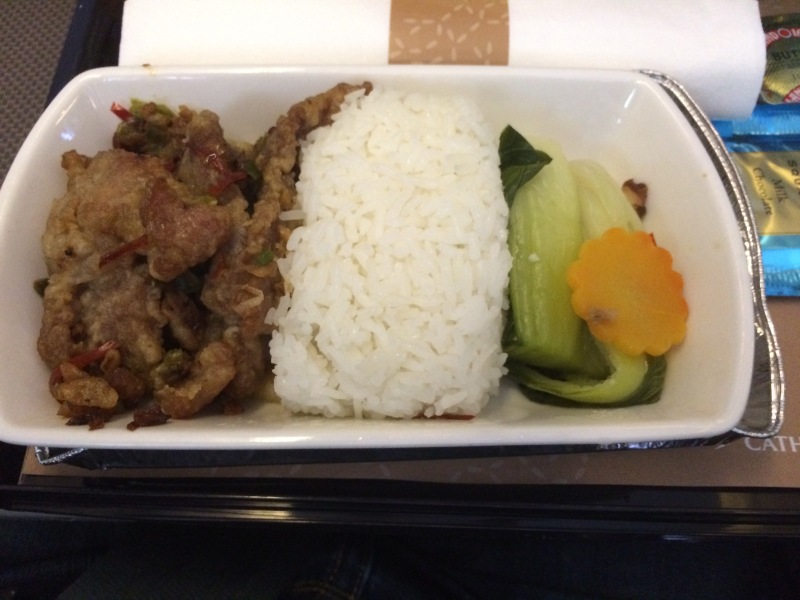 The salad was quite tasty and fresh, while the main meal was fantastic. The pork was cooked and seasoned nicely, while the rice was nicely cooked. The vegetables were also crisp and tasty. Overall, a really good job from DO&CO and Cathay Pacific Catering. The chocolate that came with the meal was also incredible.

The meal also came with ice cream, which was soft and easy to eat. I was happy to see that Cathay offers passengers full sized tubs for ice cream, rather than the mini tubs that they have been known to give out in the past. Kudos. 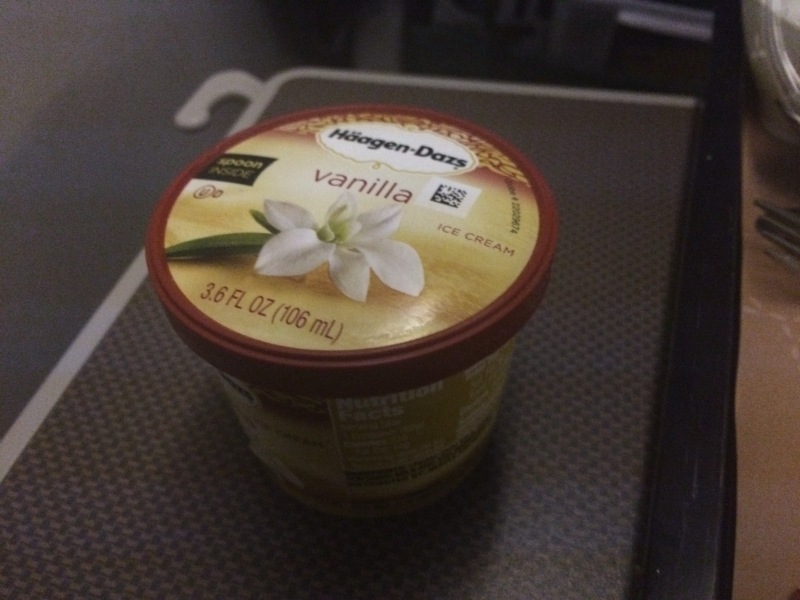 Overall, I had no complaints about the meal. Everything was fresh, tasty and well prepared.

After spending a week in the United States visiting up to three boarding schools per day, I was exhausted and conked out for three hours. The seat was really comfortable and well padded, making it comfortable for sleeping. The blanket was also comfy, while the pillow was well padded and provided a lot of support.

I spent some time working on my laptop, and before I knew it, the lights were switched on for the second meal service, which was timed horribly. Most of the passengers were sleeping or resting shortly before the service, only to be rudely awakened by the harsh cabin lights. Although I understand that it’s a move to avoid hungry passengers, it was so poorly executed. Cathay really needs to rethink their service, by either offering hungry passengers the option to dine on demand while retaining the main meal service at the end of the flight or simply offering a more substantial snack selection in lieu of the current “cup noodles and cookies” setup that they have now. 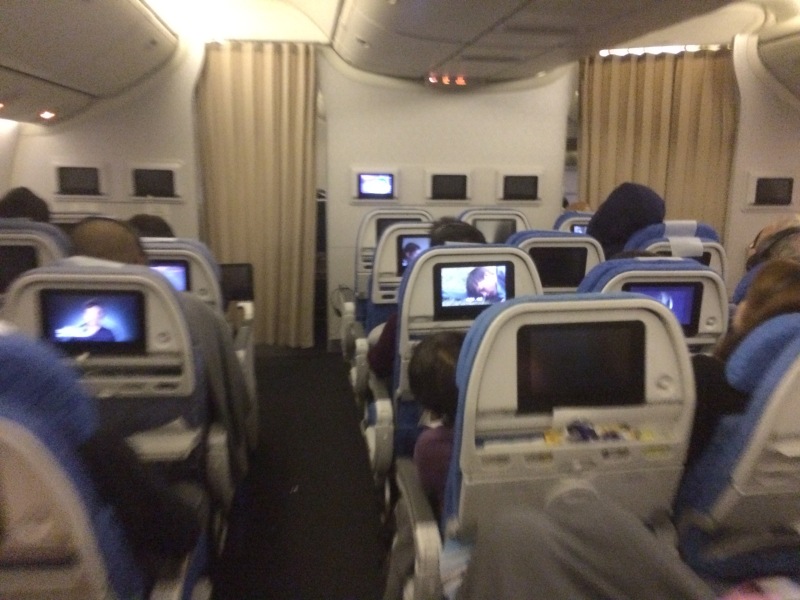 I picked the stir fried chicken with rice. Unfortunately, I didn’t get a picture of the dish. However, it was quite tasty. The chicken was well cooked and the sauce was tasty, while the rice was perfectly cooked. The dish came with a side of fruit and an apricot crumble served with vanilla sauce, both of which were phenomenal.

At the time, Cathay served a Business Class dish for the main meal service and a dish from Economy for the second meal service. However, I believe that this has been updated and Premium Economy passengers are now offered an upgraded second meal service. I guess I’ll just see when I fly from New York to Hong Kong in a week or so! 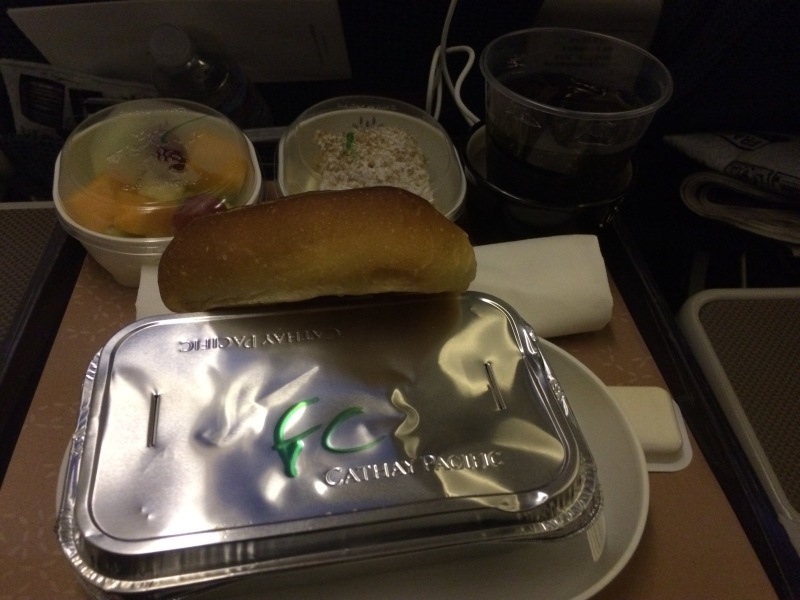 I picked an episode of the Big Bang Theory, which was quite funny. 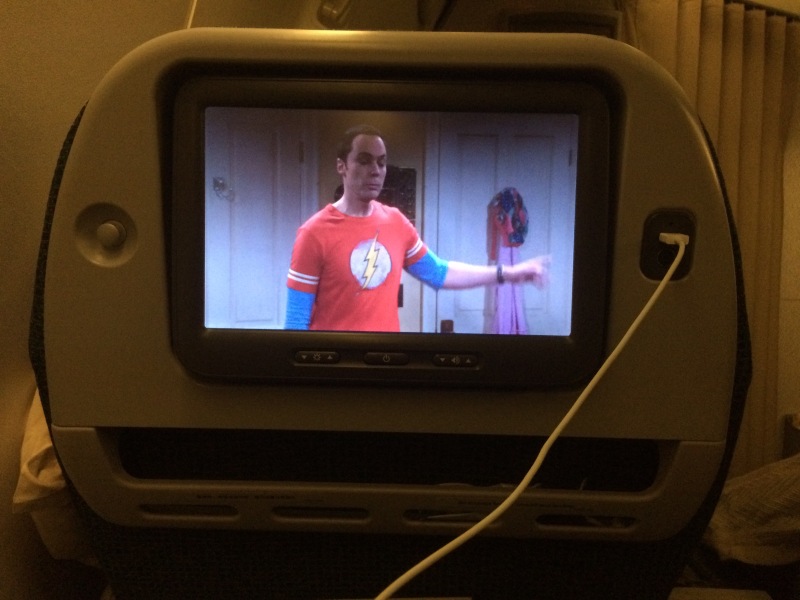 Then, the lights were dimmed to allow customers to rest. 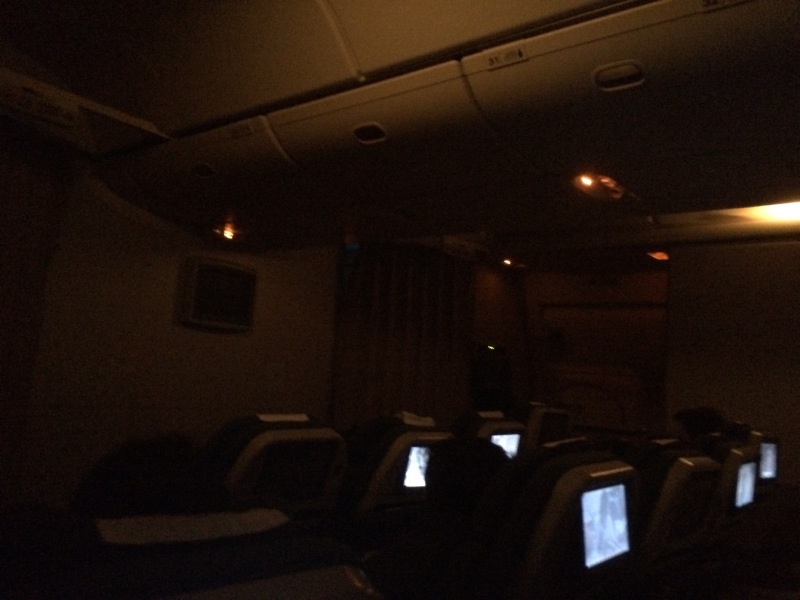 I slept for a while and woke up feeling peckish. So, I ordered some cup noodles, which were quite tasty…I mean, not that you can go wrong with what is essentially dried up noodles served in copious amounts of MSG. 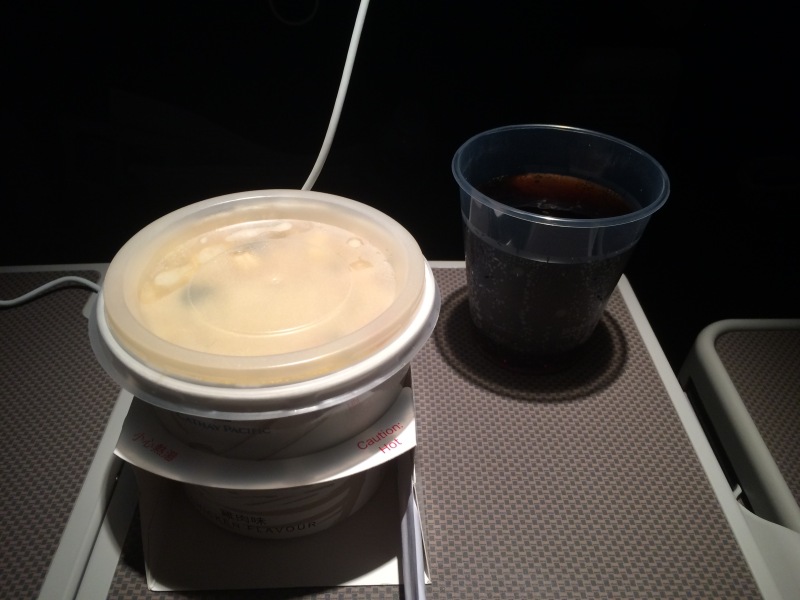 The service aboard the flight was pretty good. The crew were very friendly and welcoming overall. However, the highlight of the flight was a phenomenal purser who was incredibly friendly and worked really hard to ensure passengers were comfortable by constantly running around the cabin to check up on everyone, while also taking the time to make small talk with customers. The in-flight service manager was also fantastic, and constantly walked throughout the cabin talking to numerous passengers and generally making them feel welcome.

Shortly afterwards, the lights were turned on and the connecting information was shown on the screens. The in-flight service manager also used the entertainment system to inform us about local weather conditions, which I thought was a nice touch. 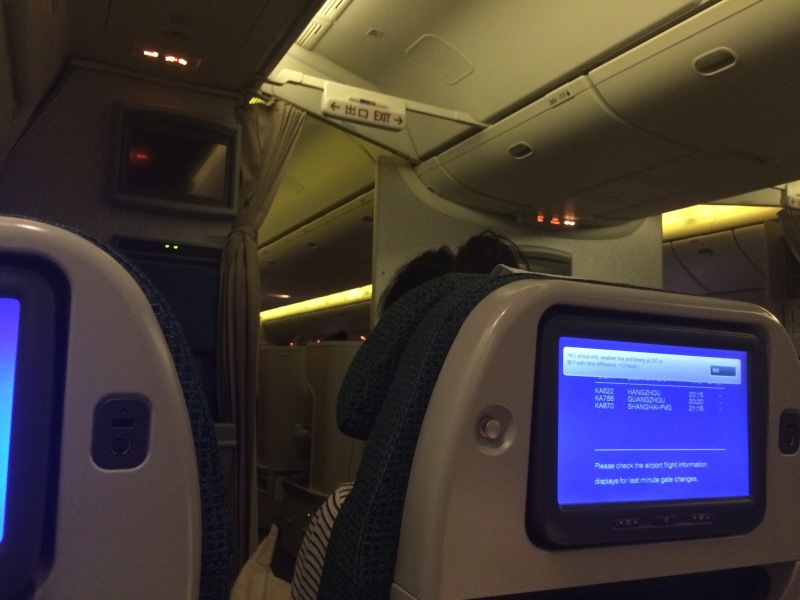 We touched down on schedule and taxied to a gate, during which we passed a bunch of Cathay planes. Ahh, it’s always nice to be back in Hong Kong! 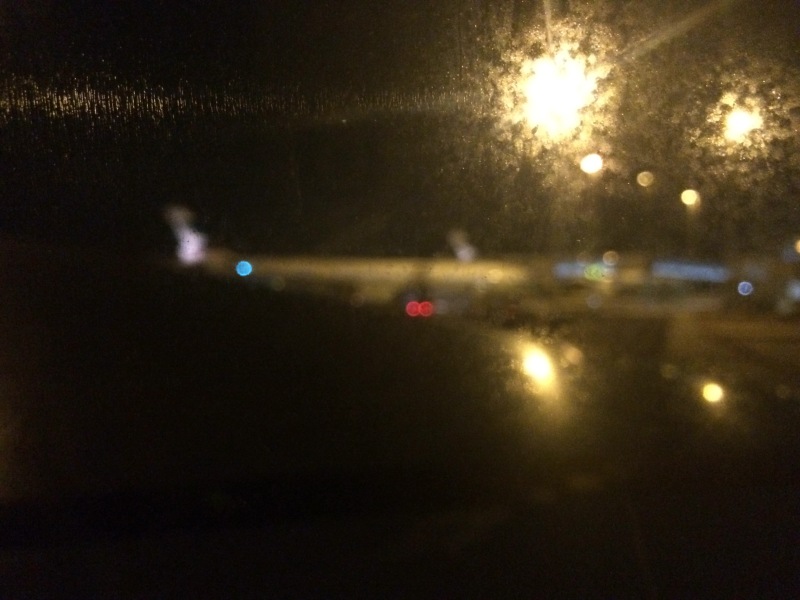 Interestingly, this flight was operated through the “polar route”, which was a whole new experience for me. It looked like we flew the other way around the world on the Airshow. 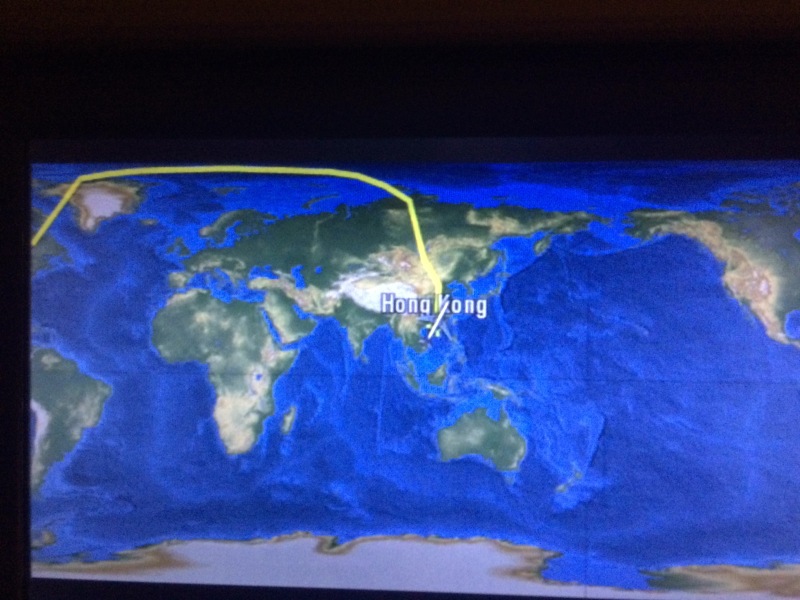 I bid the crew farewell, cleared immigration and collected my bags in less than 10 minutes, which is a personal record for me.

Cathay Pacific’s Premium Economy is a great way to fly. The seat is very well designed and a step up from your average Economy seat, with phenomenal padding, a good amount of legroom while little details like footrests do a lot to boost the experience. Aside from that, the food is pretty average, and the service is perfectly fine on a good day. While it’s no Business Class, it’s an alternative for the savvy traveller with a budget.