We arrived at the Hotel Catalonia Square by taxi from the Barcelona Train Station. The taxi ride was pleasant enough and the driver was friendly, and took us directly to the hotel (unlike our taxi driver in Madrid). At walked into the tiny lobby.

We were welcomed by the extremely friendly associate at check in, who quickly processed our check in. We were then told that we had been upgraded to a Junior Suite, which was a nice gesture on the hotel’s behalf.

After check in, a friendly bellman helped us with our bags and gave us a quick tour of the hotel’s facilities, and showed us to our room.

The room was the biggest of our stay so far, with a sitting area (which had a couch that could be converted to a bed), and a separate sleeping area, which was separated by a large rectangular desk, all of which were decorated in a modern but practical manner.

The beds weren’t really comfortable, which I found to be the trend during much of our stay. There also weren’t proper thick duvets, but rather thin sheets. While I’d be griping about that during the winter, it was perfect for a hotel situated in Barcelona, in the middle of summer. You could also easily adjust the air conditioning to fit your fancy, so it wasn’t that big of a problem. 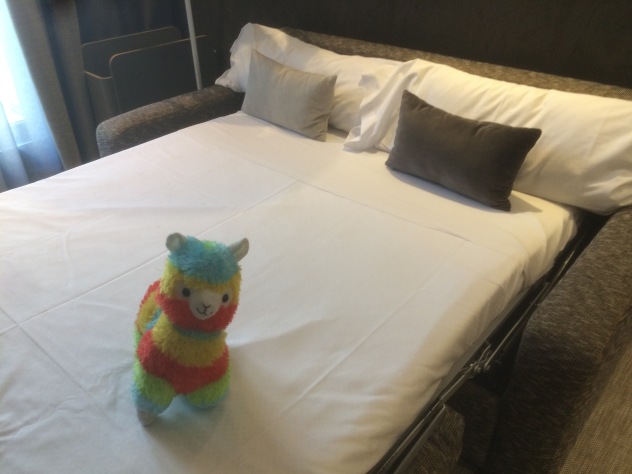 There was also a nice “clothes-hanger-apparatus-thing” next to the sofa bed combination, which was useful for hanging up clothes that we had just washed.

The desk was pretty long, and was quite useful for working. The chair, however, wasn’t padded and wasn’t exactly the most comfortable thing to sit on for long periods of time. On the desk was some hotel information, a pen, and a Nespresso machine with pods, which hid a series of power ports.

Next to the beds in the main sleeping area, there were a series of EU power ports, lamp switches and an iPod dock, which unfortunately could only be used by last-generation iPhones. C’mon hotels, no one uses iPhone 4’s anymore, it’s time to revamp your equipment. As with most European hotels, there was also a Business Class style reading light next to the bed.

The toilet was of a good enough size, and featured a nice shower with both rainforest and shower head faucets, as well as a nice enough sink with adequate counter space. 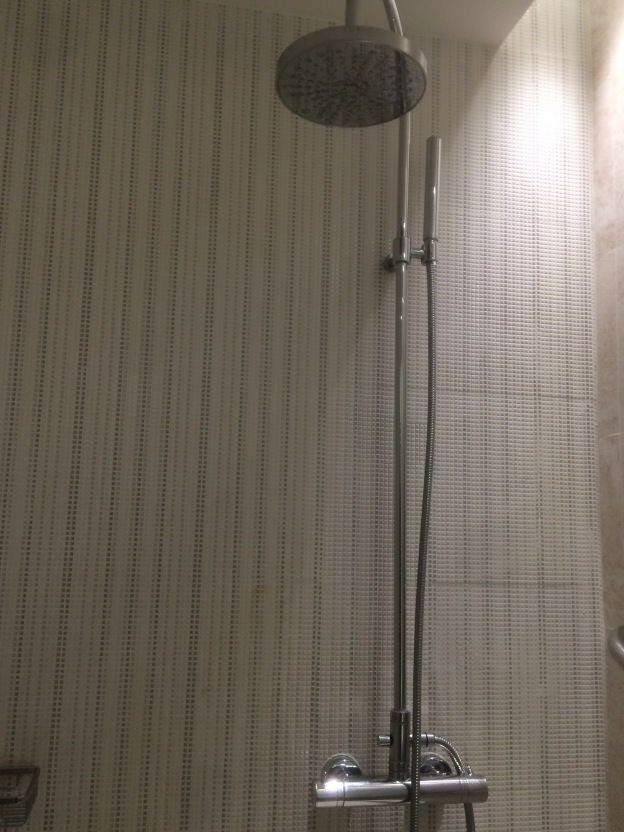 There was also an unfurnished balcony, featuring views of the department store across the street.

Now, on to the facilities of the hotel. There was a nice lounge on the second floor of the hotel, with a spread that went from 2pm to 11pm.

The spread featured some sandwiches, a variety of non-alcoholic drinks, cakes, pastries and two hot dishes which ranged from croquettes to chicken nuggets. While the food wasn’t really gourmet, I appreciated the hotel’s effort at trying to improve the overall customer experience. 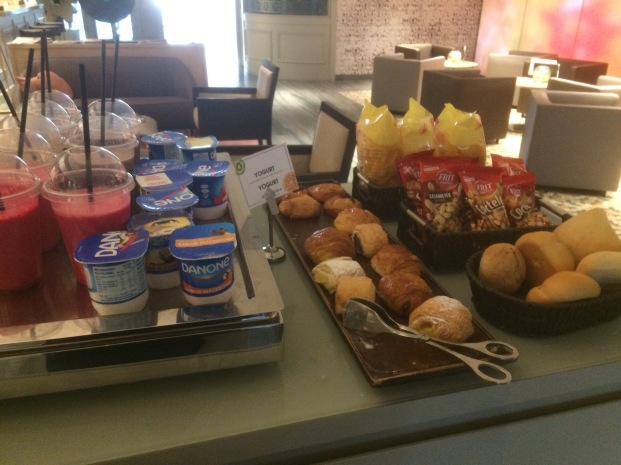 There was also a nice “business centre” tucked away in a corner, with two desktop computers and printers, as well as more seating.

As for the location of the hotel, it was fantastic. The hotel was a 5-minute walk away from the closest metro station (which, by the way, was a mouthful to pronounce). In the other direction, there was a huge (and beautiful) square, as well as a gigantic shopping street with every single brand that you could possibly think of. The street also had two buildings that were designed by Anton Gaudí, which were gorgeous. Additionally, there was a department store right across from the hotel which was a nice place to buy some souvenirs. Lastly, there was a taxi stand across the street from the hotel, which meant that there was always virtually no wait to get into a taxi.

After 5 fantastic days spent in Barcelona, we left at 6am in a hotel-arranged taxi for El Prat Airport, which was a 30-minute drive from the hotel.

Our family has a tradition of picking the nicest hotels to stay in on the last stop of our trip (it’s probably a mere coincidence…). Having stayed in some not-so-good properties throughout the trip, the hotel was definitely a welcome surprise. The upgrade was a nice little gesture on behalf of the hotel, the decor was modern and practical, the location was phenomenal and the snack selection was a fantastic gesture on behalf of the hotel.