Cathay Pacific’s lounge in Taipei was one of the lounges that they first renovated as part of their new rebranding. Obviously it’s not as nice as The Pier which I visited earlier, but in good conscience I knew that this lounge was not to be missed.

And suffice to say that for the entire day I was checking Cathay Pacific’s website for CX 900D (the A350’s previous flight stuck in Manila)’s flight status, as well as tracking the A350 on flightradar24.com every five minutes. For once my family felt my enthusiasm. Sure enough, B-LRA pulled out of Manila almost two days late, and got to Hong Kong, literally, just in time for the CX 400 run there.

Meanwhile, we were at the airport around two and a half hours early.

I managed to capture a shot of an EVA Air A330, which is one of my better shots of an aircraft so far.

Check-in was a really quick affair, as the business and bag drop lines were both empty. The friendly check-in agent shared my excitement when I revealed I booked this flight solely for the A350, and said that there was a 90% chance that I would get what I wanted.

Immigration was really hectic, but I picked the right line and made it through quickly, as did my parents (they were out at duty free and let me in first, which worried me for a while, but they did get through with an hour to spare).

At Taipei Taoyuan’s terminal 1, all lounges are located in a lounge hallway, with Cathay Pacific’s one of the first down to the line. I thought the lounge’s entrance was beautiful, and quickly made my way down the glass sliding doors.

The lounge resembled The Pier, albeit being much smaller. It featured a hallway connecting the food hall, the noodle bar, the bureau, a relax area and a bar. The hallway had the same “boathouse” finishes that The Pier has, which I loved.

The dining hall was in the first part of the lounge, where no one really was in (it’s pretty exposed to the entrance). It featured a mini food spread (I don’t remember there being an actual food spread, but I could be wrong). 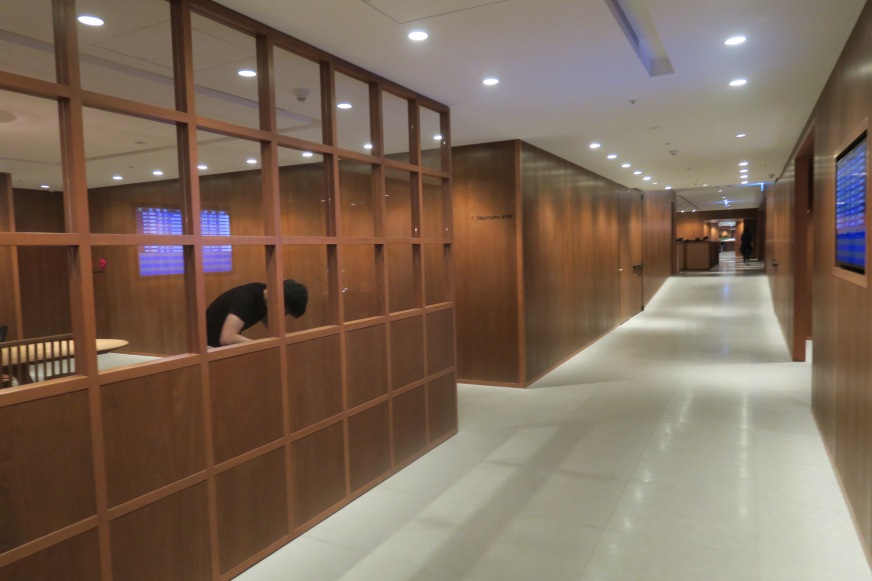 The food hall only featured drinks and a few snacks. I don’t even recall it being called a food hall, but it resembled The Pier’s food hall the most out of all spaces, so I’ll stay with calling it that. 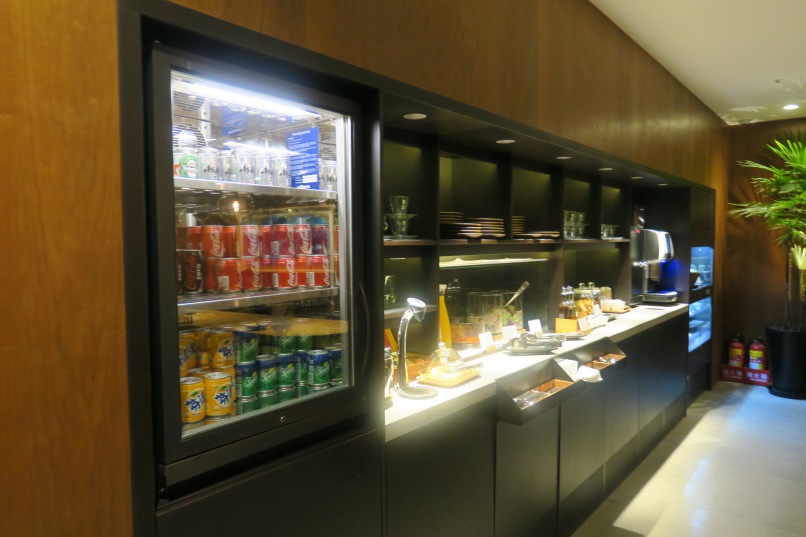 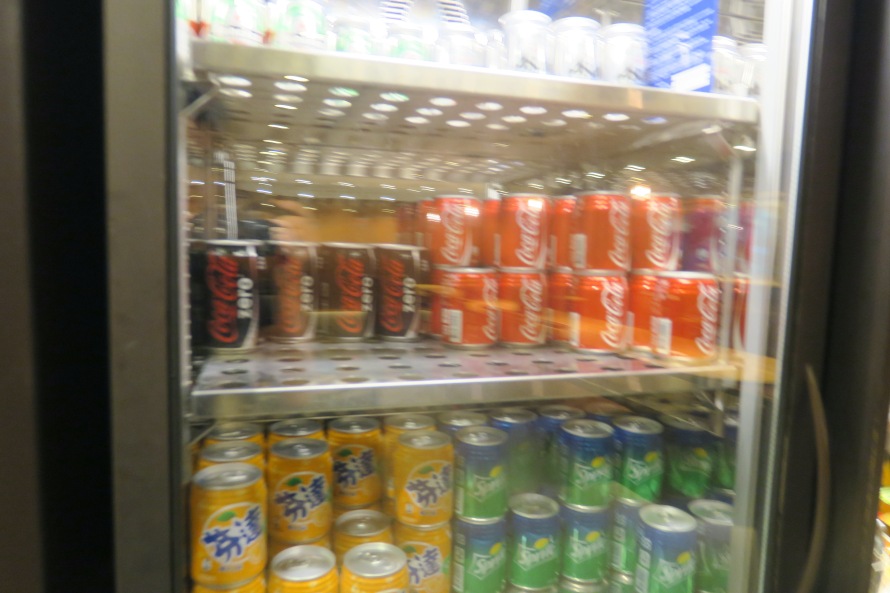 The signage was as follows, at the end of the noodle bar and the bureau:

Between the food hall and the noodle bar was a work area which featured iMacs (there was a separate area for the bureau, but if you don’t have a computer, here’s your workspace). 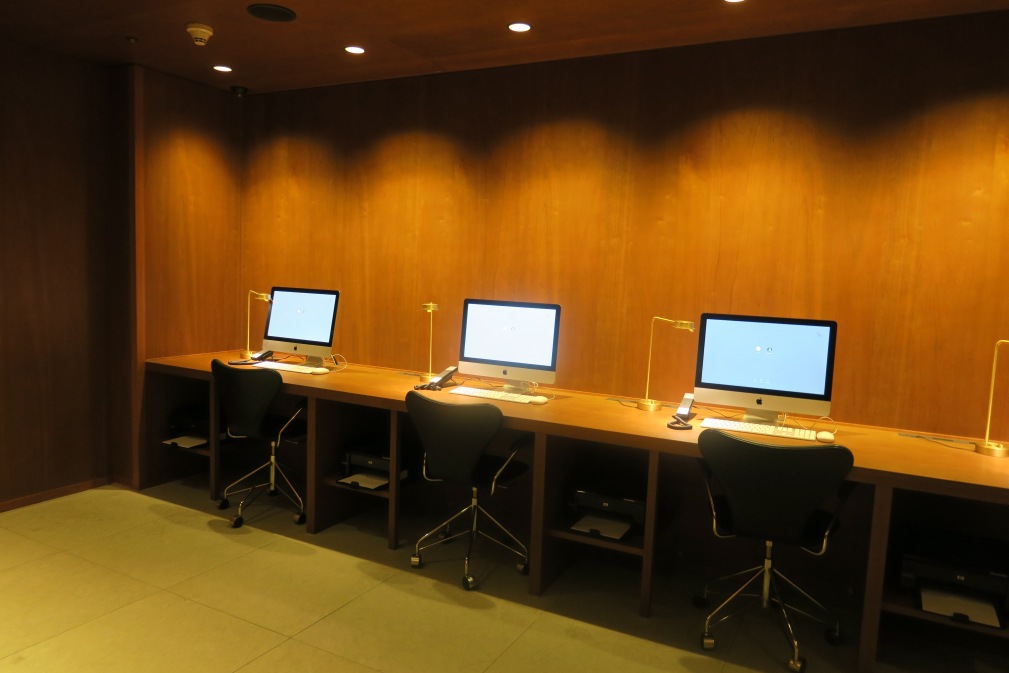 Past the work area, which I didn’t spend too much time in, was the noodle bar, which was probably the busiest part of the lounge. It was similar to the noodle bar at The Pier, which featured wooden and green hues. It featured bar-style seating (duh) and restaurant-style seating. 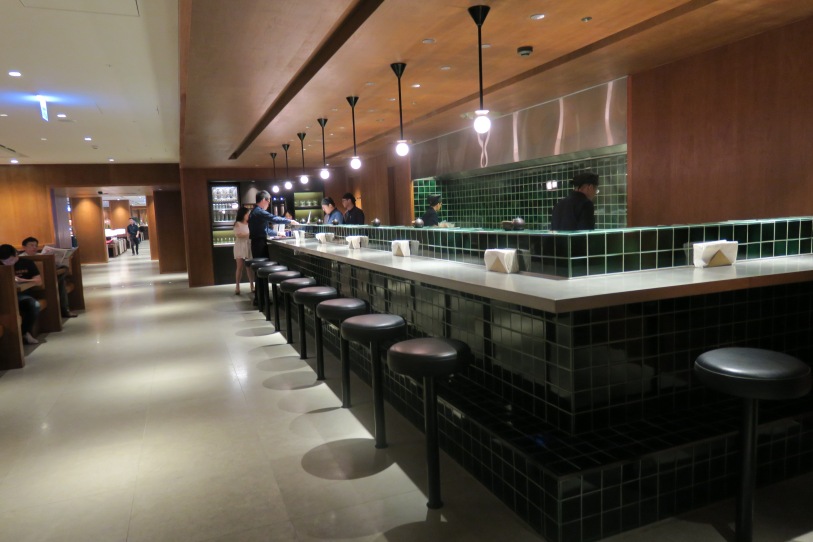 There was a huge variety of snacks, including dim sum and noodles (the area was really busy so I couldn’t take a picture of the menu). I took a Taiwanese beef noodle soup, which I felt was a little salty in terms of the broth, but the noodles were perfectly prepared.

There was also a good drinks machine at the noodle bar. 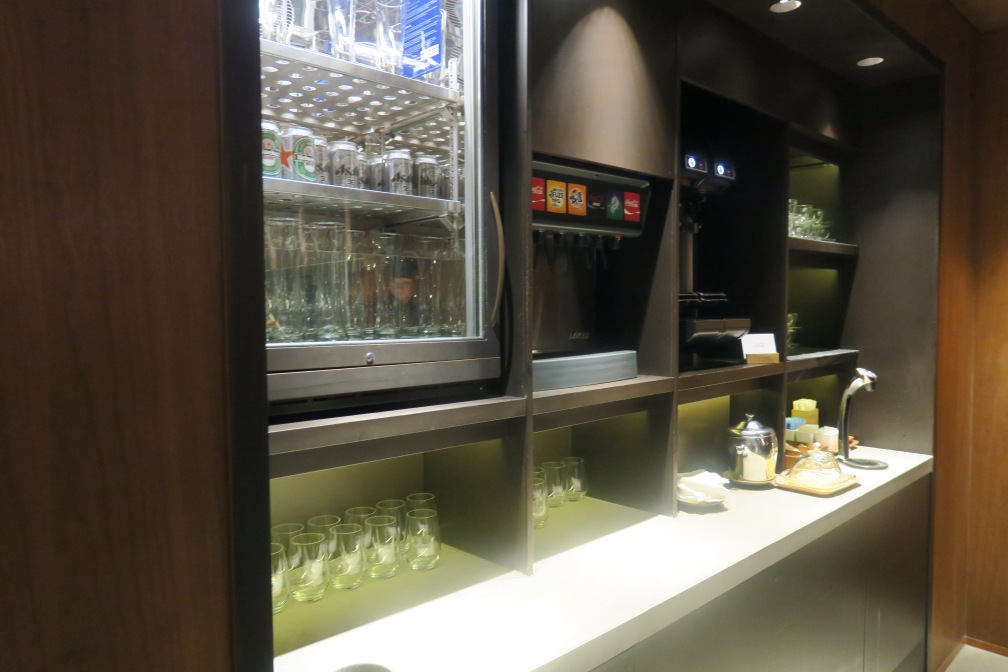 Past the noodle bar was a really small bureau, which featured Cathay Pacific’s signature, really comfortable Solo chairs, as well as a bit of other seating for working. I took one of the Solo chairs for most of my stay. 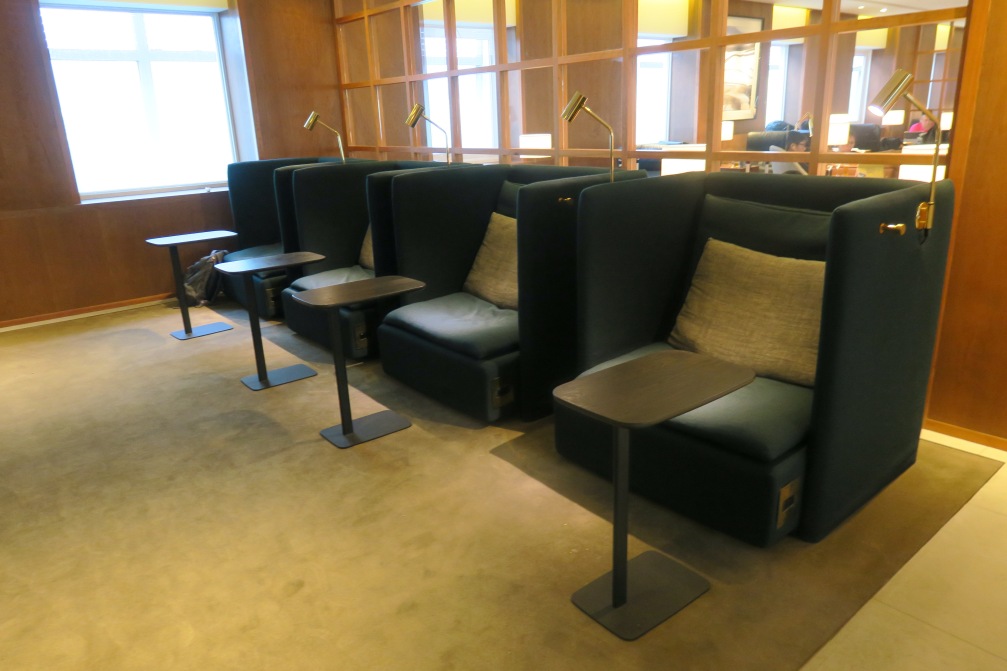 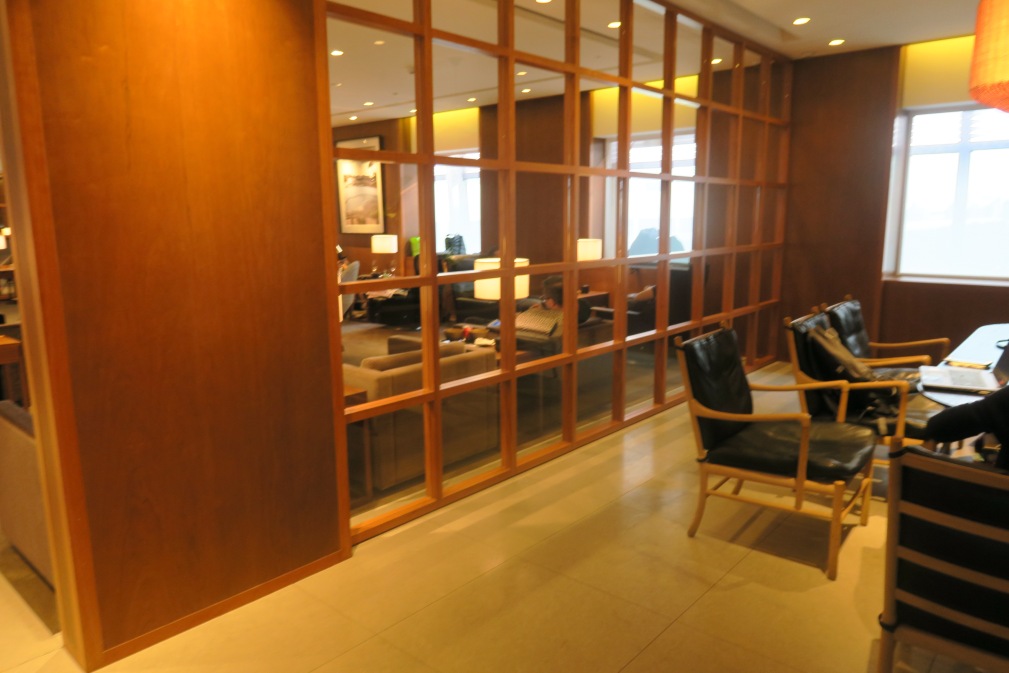 There was also a drinks area in the bureau, handy for getting drinks if you wanted to work (as I did, but I didn’t manage to finish the post I wanted).

Past that was a bigger lounge area, which wasn’t crowded at all for the stay (while small compared to its Hong Kong counterpart, for a lounge with only twenty flights out of the airport, it’s huge). It featured lots of comfortable seating, arranged in a way that just made the area seem spacious. That’s something Cathay Pacific’s done brilliantly at since the rebranding, but failed to impress beforehand.

Just have a look at how much space there is – Cathay Pacific doesn’t look to maximise capacity, but rather for actual comfort of the lounge. That’s something a lot of lounges don’t get right, in my opinion. 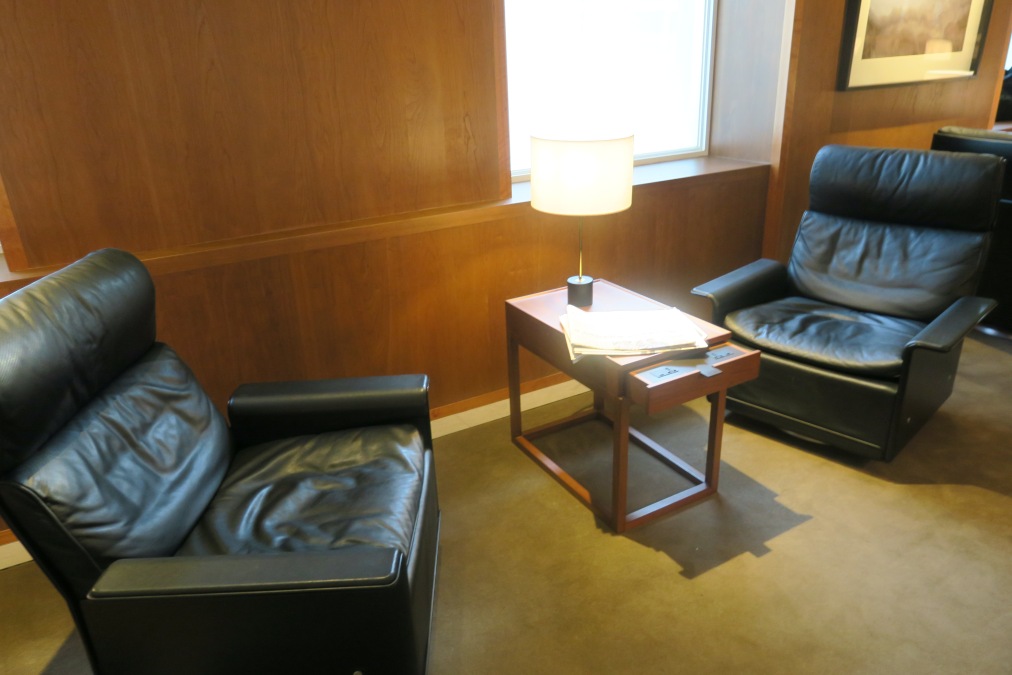 There are drinks at the lounging area, as well as a departures board, which was exciting (as I watched CX 409 roll slowly up the top of the board). 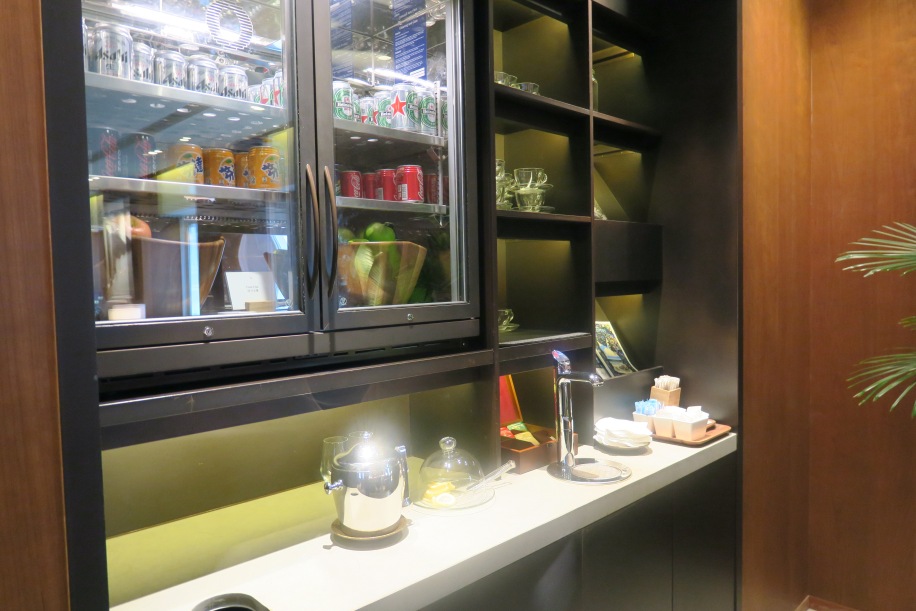 While the latter was useful, the former was largely useless, as the bar was right at the end of the lounge area. Along with liquor (that I can’t judge as I’m underaged), there was also a drinks menu, including bubble tea, which I enjoyed. It wasn’t the cheap bubble tea you get at Canadian takeouts that I expected, it was actual sweetened milk tea with tapioca pearls, which I really linked.

One criticism I have of the lounge is that there weren’t any gate views. While that’s no fault of the airline, it’s worth noting that, as you can’t go planespotting in the lounge. There is natural light, but it faces the highway.

Staff here weren’t outstanding, but were generally really friendly. When I checked the aircraft type of CX 409, they, without even checking, told me that I’d get the A350. I asked if there were any changes, and they said that the aircraft was already here, so there would be no chance of a change. They shared my excitement, much like all the other staff I interacted with.

After a bowl of noodles and a bit of work, I made my way to the gate to admire the A350, and make sure I was definitely the first one on the plane. It was a short walk, as the lounge is located by the B gates, so took five minutes, tops.

There was a 777-300 parked right next to us, which I couldn’t help but smile at, given that we very well could have ended up on one of those. 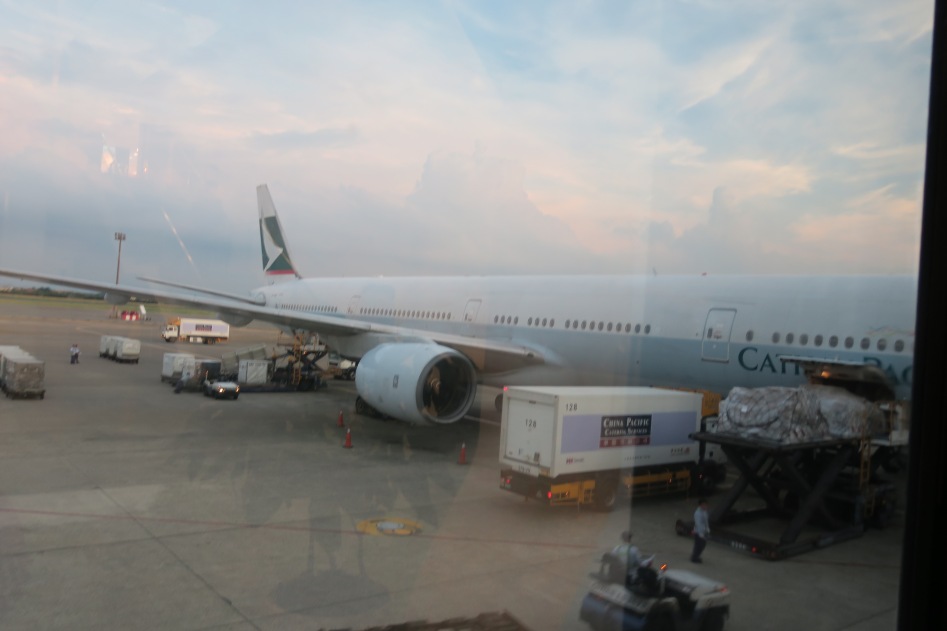 The gate agent shared my excitement. Thinking I was travelling alone, she advised me to take the Economy lane as it was “faster”, but after realising I was a business class passenger, she was sure to let me in the priority queue as fast as possible…

While the review of this lounge was rather quick in anticipation of the review that’s coming next, I was very pleasantly surprised by the Cathay Pacific lounge Taipei. It was big, not overcrowded at all, and featured plenty of seating. While it wasn’t spectacular in terms of the service, the food and actual design blew my mind, especially for an outstation lounge.

I do wish there was a more prominent actual food spread, though, as either there wasn’t one, or it was so small that I managed to miss it during the stay.

I rate this as one of the best outstation lounges I’ve been to, along with the Japan Airlines Sakura Lounge at Osaka Kansai.